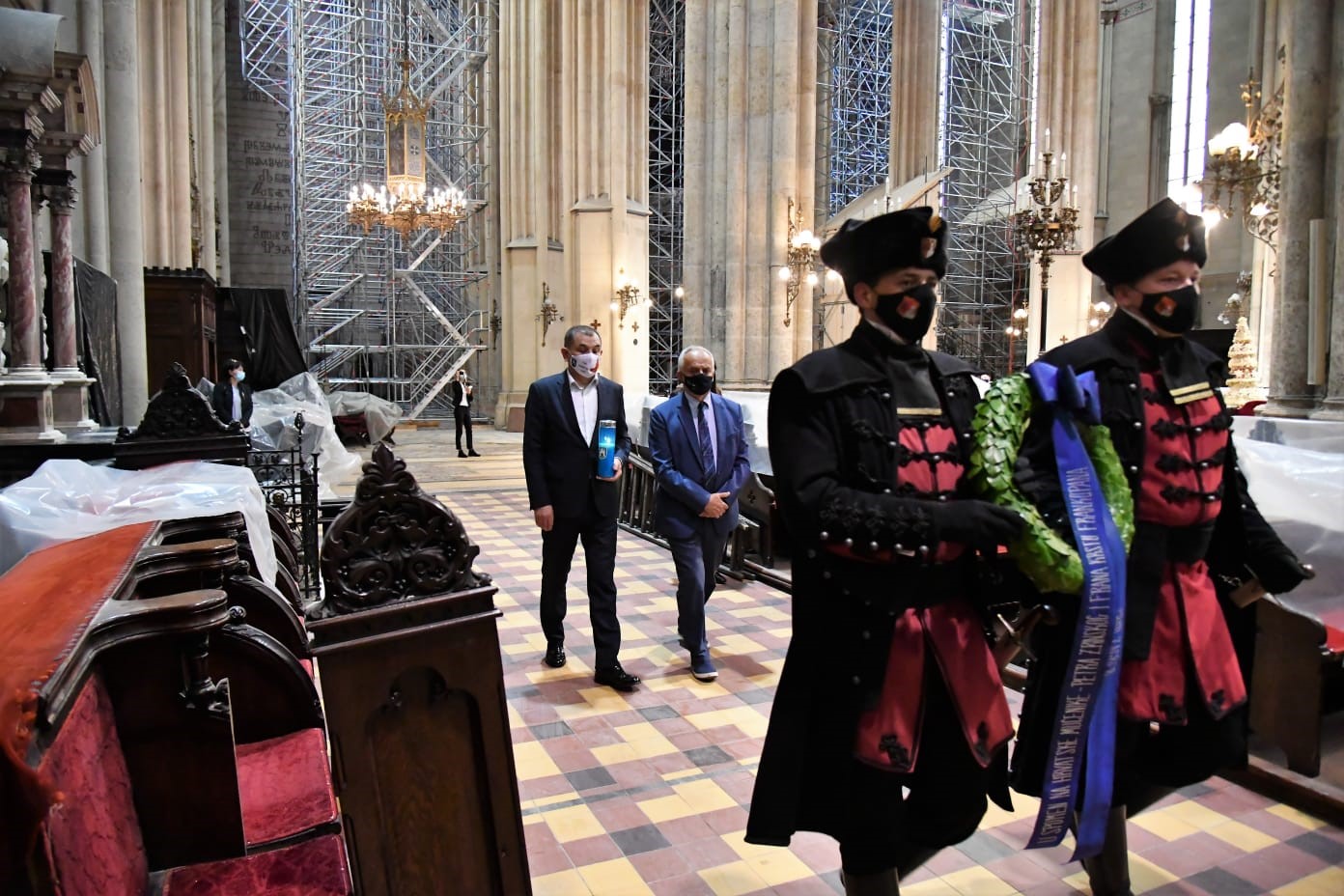 The 350th anniversary of the martyrdom of Petar Zrinski and Fran Krsto Frankopan was marked on Friday in Zagreb Cathedral.

On behalf of the Deputy Mayor Jelena Pavičić Vukičević, head of the City Office for Education Ivica Lovrić laid a wreath and lit a candle at the bust of Petar Zrinski and Fran Krsto Frankopan in the Cathedral.

“Zrinski and Frankopan are pride of the nation, and their heroic deaths symbolises the cultural self-awareness of two Croatian greats and martyrs, who sacrificed their lives in opposition to the unacceptable. Their remains are buried in the crypt behind the Main Altar of the Zagreb Cathedral,” Grad Zagreb said. 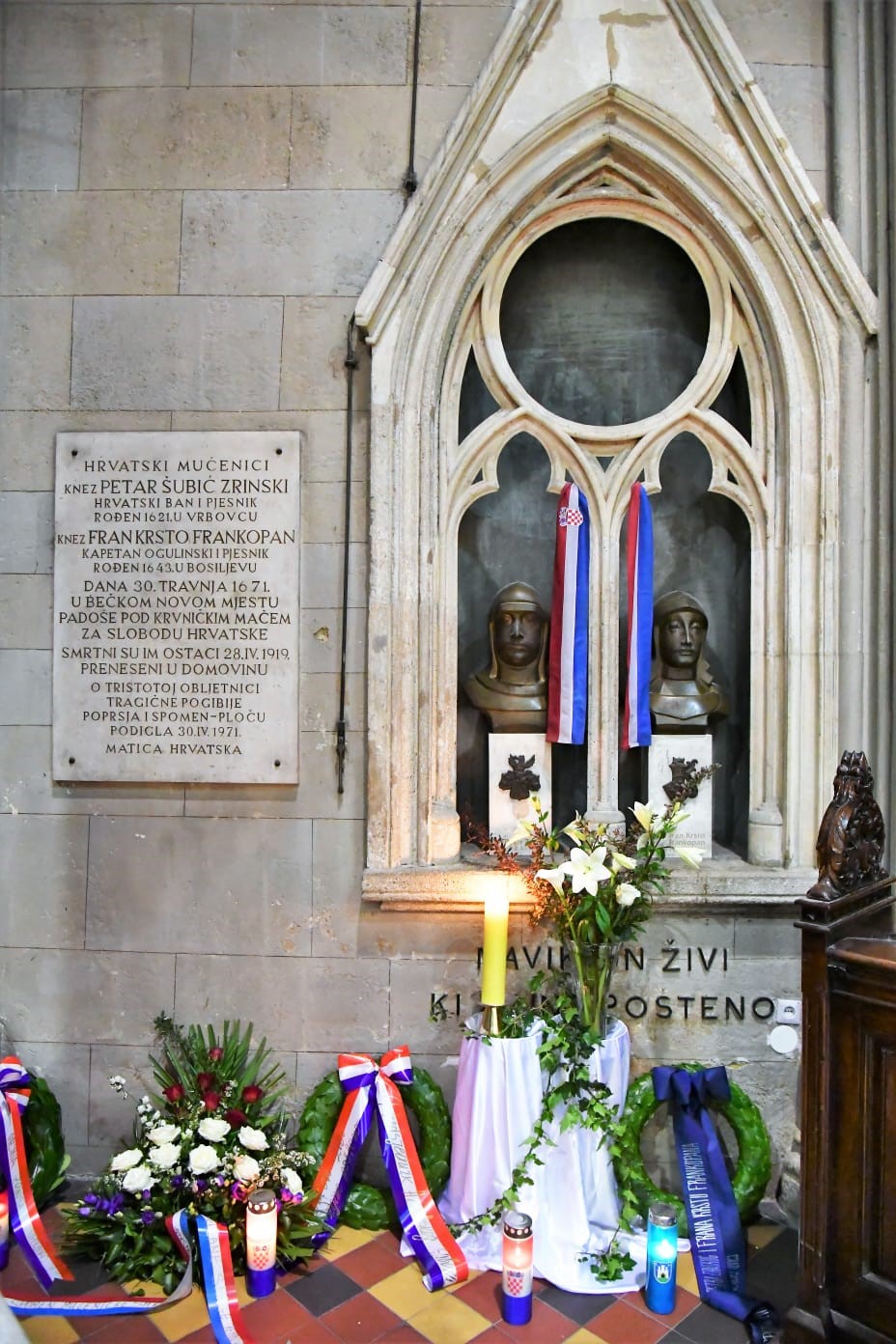 Croatian Post and Croatian Post Mostar released a joint issue commemorative stamp on the occasion of the 350th anniversary of the deaths of Petar Zrinski and Fran Krsto Frankopan. 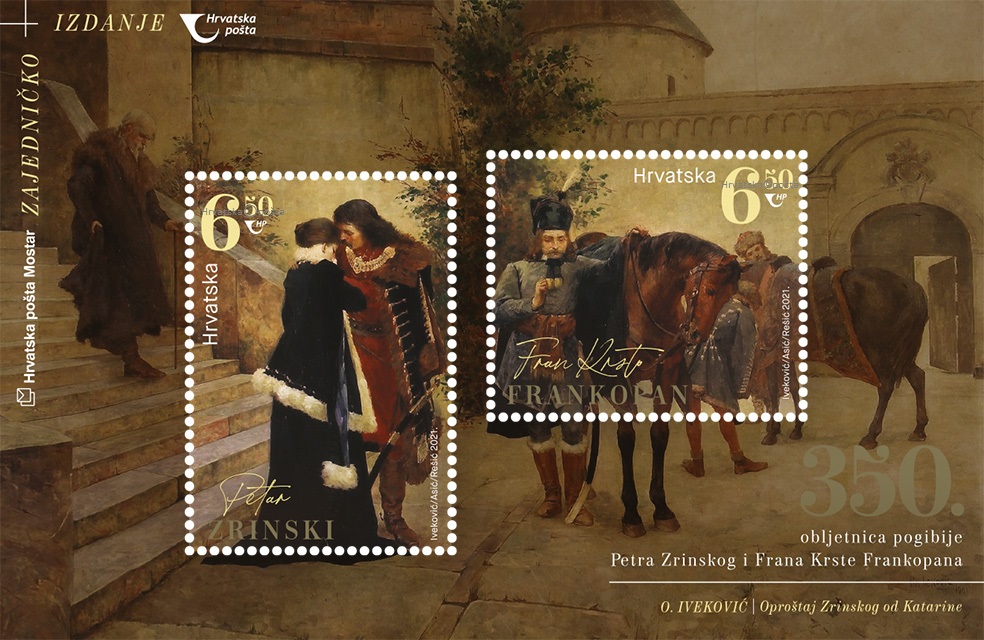 The motif on the commemorative block with two stamps is a painting by Oton Iveković Farewell to Zrinski from Katarina, and the author of the edition is Sabina Rešić, an academic painter and designer from Zagreb. The joint edition was realised in cooperation with the Croatian Historical Museum.

The executioner’s sword that spring morning brutally ended the lives of two representatives of the most prominent and influential aristocratic families of the Kingdom of Croatia, who dared to rebel against Emperor and King Leopold I of Habsburg. They did so because they felt that this ruler was neglecting his obligations as King of Hungary and Croatia and that their moral obligation was to find a better solution to preserve the Kingdom’s integrity, even if it was a break with Vienna and consent to the help of French King Louis XIV. and the Ottoman Sultan Mehmed IV., mortal enemies of the House of Habsburg.

Although the election of that dynasty in 1527 in Cetingrad as the new ruling house on the Croatian throne was an expression of the free will of the then political elite, it was, before the onslaught of Ottoman invaders, still primarily a pragmatic solution to save the Kingdom. But since then, despite Habsburg guardianship, Croatia has been reduced to “the rest of the remnants”, and the political balance between the Austrian and Hungarian-Croatian parts of the Habsburg Monarchy has been increasingly disturbed. The proverbial drop that overflowed the glass appeared in 1664 when Emperor Leopold I, after a successful military campaign and a great victory, made a “shameful” Peace of Warsaw with the Ottomans and without asking the Hungarian and Croatian political elite who thought the opportunity for liberation was missed. by reunifying their lands under Ottoman rule.

The core of the powerful secret aristocratic opposition that emerged at the time was the Croatian ban, Count Nikola VII. Zrinski, his brother, Count Peter IV, Count Fran Krsto Frankopan, Hungarian palatine Ferenc Wesselenyi, High Judge Ferenc III. Nádasdy, Count Ferenc Bónis and Count Erazmo Tattenbach. With the death of Nicholas VII. In 1664 and Wesselenyi three years later their movement, however, lost two key figures. When, in the spring of 1670, serious preparations for an armed uprising finally began, the ruler already knew of the conspiracy, and summoned Peter IV Zrinski and Fran Krsto Frankopan in Vienna.

Although Emperor Leopold I often emphasised “grace” as one of the main virtues of the House of Habsburg and thought about it in the case of Zrinski and Frankopan, in the end grace was denied not only to them but also to their families. Their vast estates were confiscated and divided among the emperor’s supporters. The execution of Zrinski and Frankopan proved to be only an overture to the ruthless realisation of further absolutist aspirations of the Habsburg House. Although he managed to destroy the flower of the then Croatian political elite, Vienna still failed to prevent the growing political memory of Zrinski and Frankopan, who became symbols of the struggle for Croatian sovereignty and resistance against Habsburg absolutism, especially in the 19th century.

The text on the occasion of the release of the new commemorative block was prepared by prof. dr. sc. Alexander Buczynski, scientific advisor at the Croatian Institute of History.