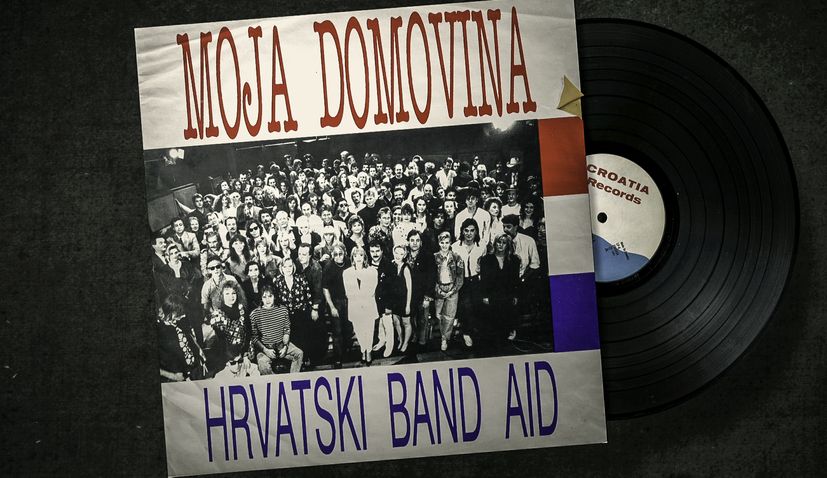 ZAGREB, 15 September 2021 – 30 years ago today, on 15 September 1991, one of the most played and emotion-stirring Croatian songs was first broadcast on television.

‘Moja domovina’ (“My Homeland”) was originally recorded in 1991 as a charity single by “Croatian Band Aid” (Hrvatski Band Aid) and tonight on HRT, where the song was first broadcast, a documentary film titled ‘Moja domovina, 11.000 dana poslije’ ‘My Homeland, 11,000 days later’ will be shown to mark the 30th anniversary.

The authors of music and lyrics were Zrinko Tutić and Rajko Dujmić. The song was arranged by Nikša Bratoš while the music solos were composed by Damir Lipošek, Vedran Božić and Husein Hasanefendić.

The song was released in the initial stages of the Croatian War of Independence.

“As I was driving along the highway I had traveled from Banja Luka from the sea to Zagreb in mid-August, I saw a column of tanks and planes flying over in a sweeping flight. That image was a trigger for me, but the song was born in me even before when I listened to news of war attacks, devastation, killed and exiled people. I finally wrote ‘Moja domovina’,” Tutić explains.

Renowned music manager Vladimir Mihaljek Miha recalls: “The guys agreed and said it could be sung by twenty people. I told them, “Twenty? No chance! This song has such power that it must be sung by at least 150 people!” And then I started calling Oliver Dragojević, Teresa, Jasna Zlokić, Stavros, Mišo Kovač, Vlado Kalember, Zvonko Špišić, Ivo Robić, Severina, Davor Gopac. We wanted this song to be sung by musicians of all genres and all generations to show that we all think the same.”

The song was first aired on television on September 15, 1991 when, on the day of the first aerial alert in Zagreb, it aired on the main evening news. After 30 years, the song’s popularity hasn’t diminished.

The documentary film airs on HRT 1 tonight starting at 20:12.

Nemir je u srcima, a ljubav u nama

Every day I think about you

I listen to the news, I count steps

Restlessness is in our hearts, love is in us

There is only one truth

Every star is shining for you

Stone is breaking, song is traveling

Thousands of generations are not sleeping tonight

The whole world is now with us… With us!

Has the strength of golden wheat

Has the eyes the color of the sea

I will return, I have to come, this is my home

My sun, my sky

You are here, with us