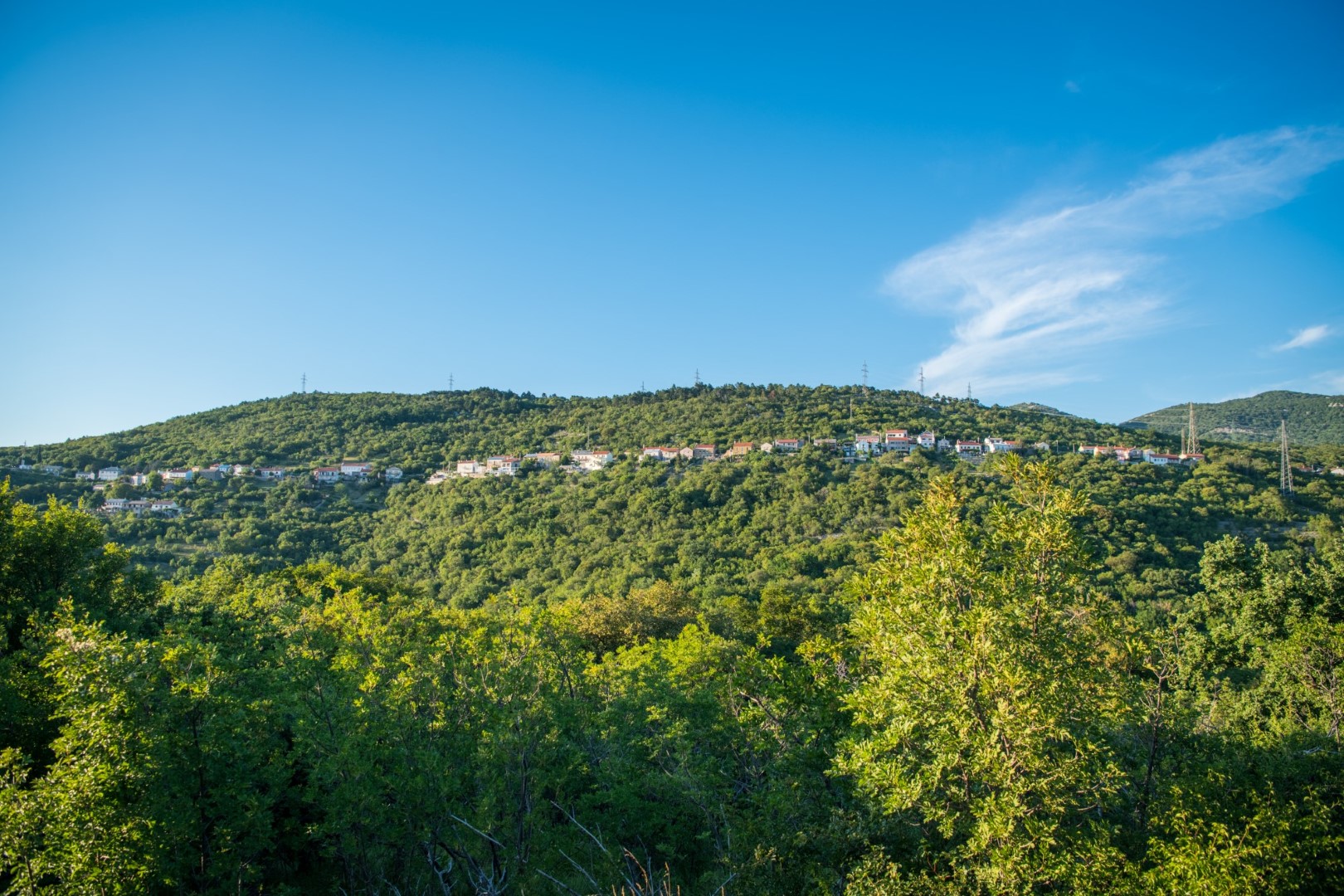 The interpretation walk “Discover All the Faces of Praputnjak”, part of Bakar’s famous event Margaret’s Summer, revealed to visitors the uniqueness of a picturesque village Praputnjak that administratively belongs to the City of Bakar.

The ladies from Praputnjak’s heritage associations took their guests through the green valley Dolčina with its original settlement, all the way to the dry-stone vineyards of Takala (part of Bakar’s dry-stone terraces) responsible for the prosperity of Praputnjak in the past.

Praputnjak rises high above the Bakar Bay, but the old settlement was located in a green, fertile karst valley called Dolčina, whose centre is today a protected rural area. The fertile valley of Dolčina enabled the villagers to live off agriculture providing them with arable land and springs of drinking water – for people (wells) and livestock (ponds), which are often located along key communication routes. 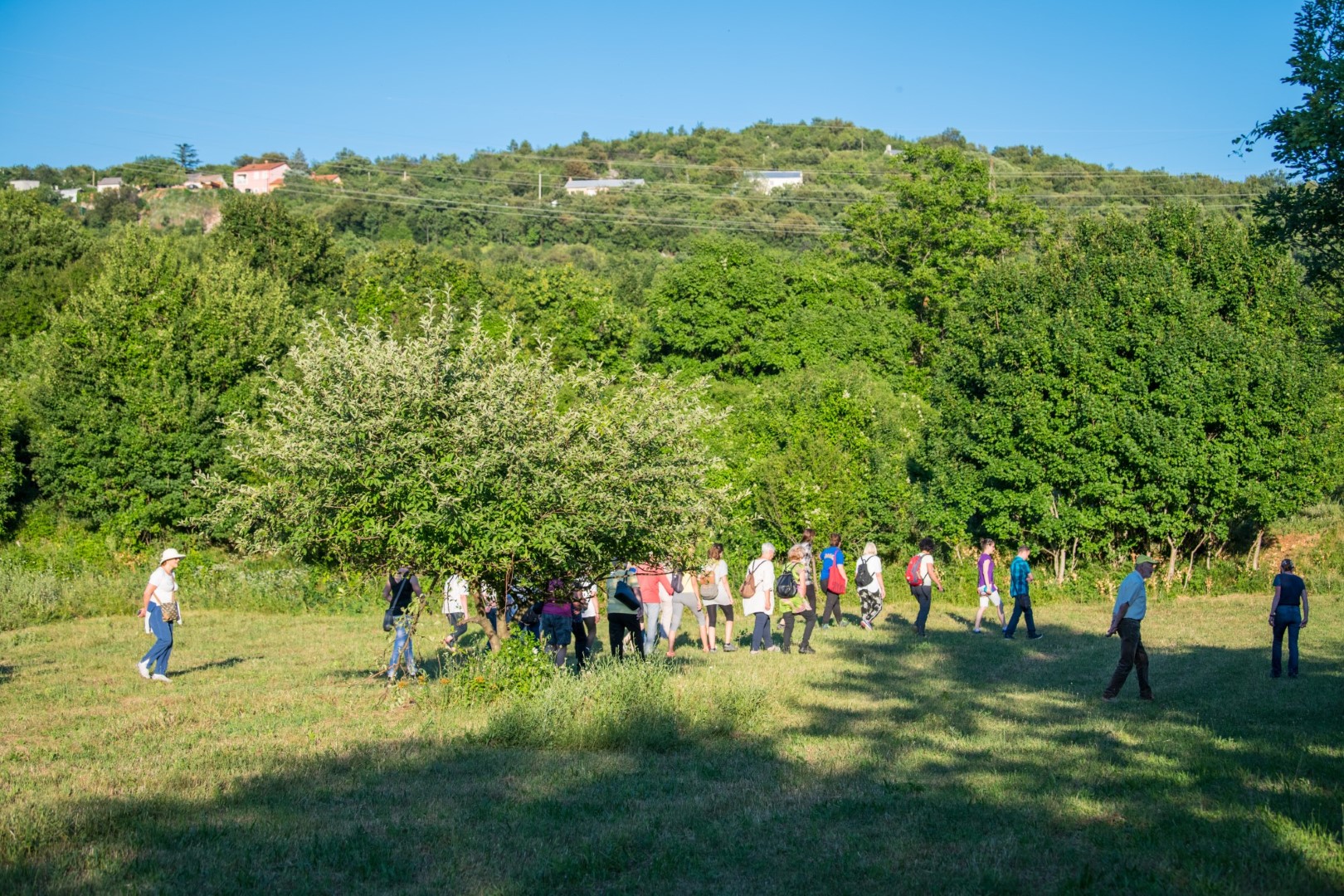 2. NEW SETTLEMENT ON THE HILL WITH A VIEW OF KVARNER

With the construction of the Karolina Road in the first half of the 18th century, the people of Praputnjak began to build their house in its vicinity on a hill above Dolac, with a beautiful view of the Bakar and Kvarner bays. The move to the new location coincided with the first wave of emigration. People of Praputnjak did not forget their home –they used to send their hard-earned money to feed their families, educate the children, buy a piece of land or build water cisterns. 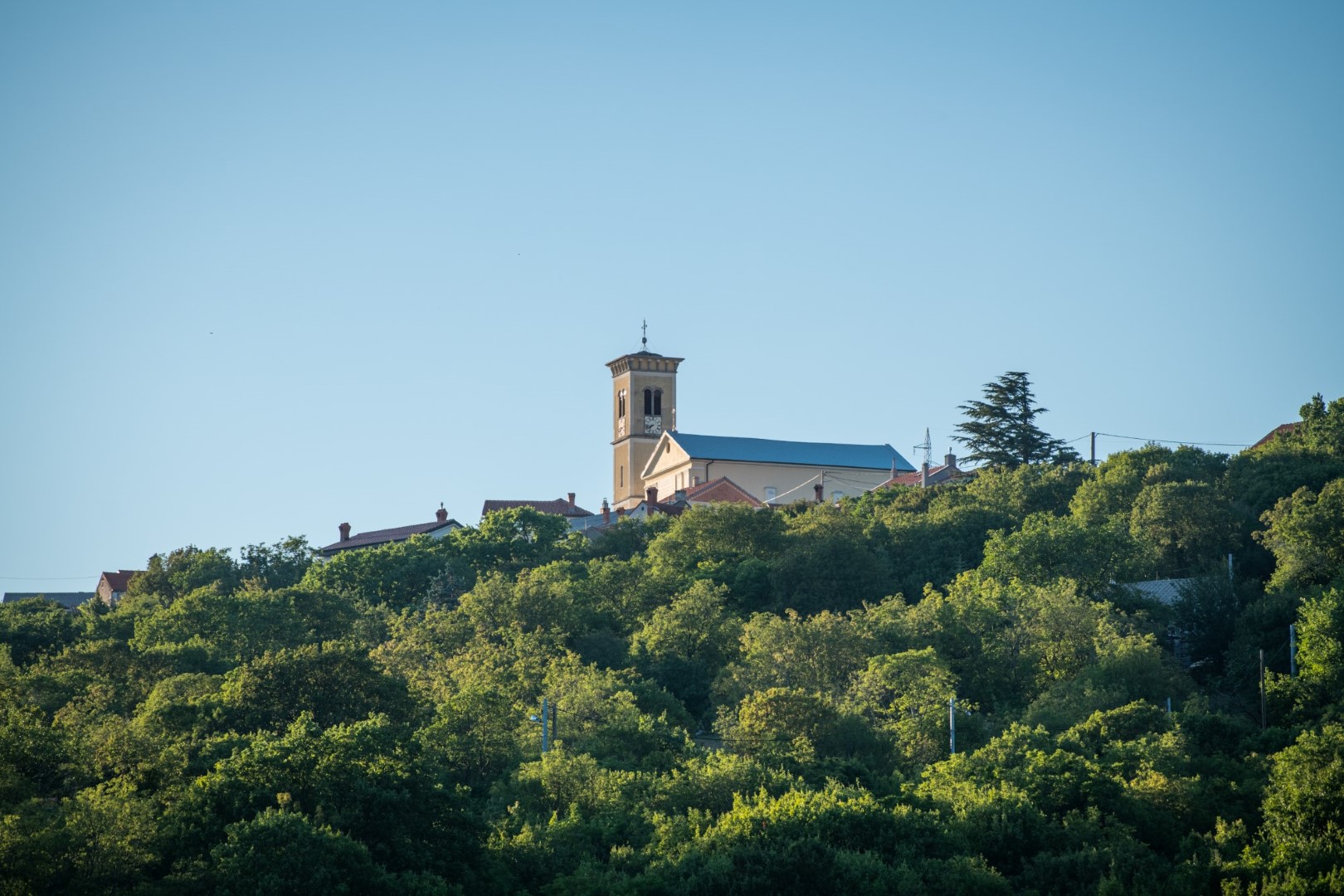 3. THE ONLY PLACE IN THE BAKAR AREA WITH TWO PUBLIC WELLS

Drinking water in the Primorje region was a treasure, and wells were genuine status symbols at that time. Praputnjak is the only place in the area of ​​the City of Bakar that had as many as two public wells, which testified to the awareness of the importance of water being available to poorer residents who could not afford their own wells. 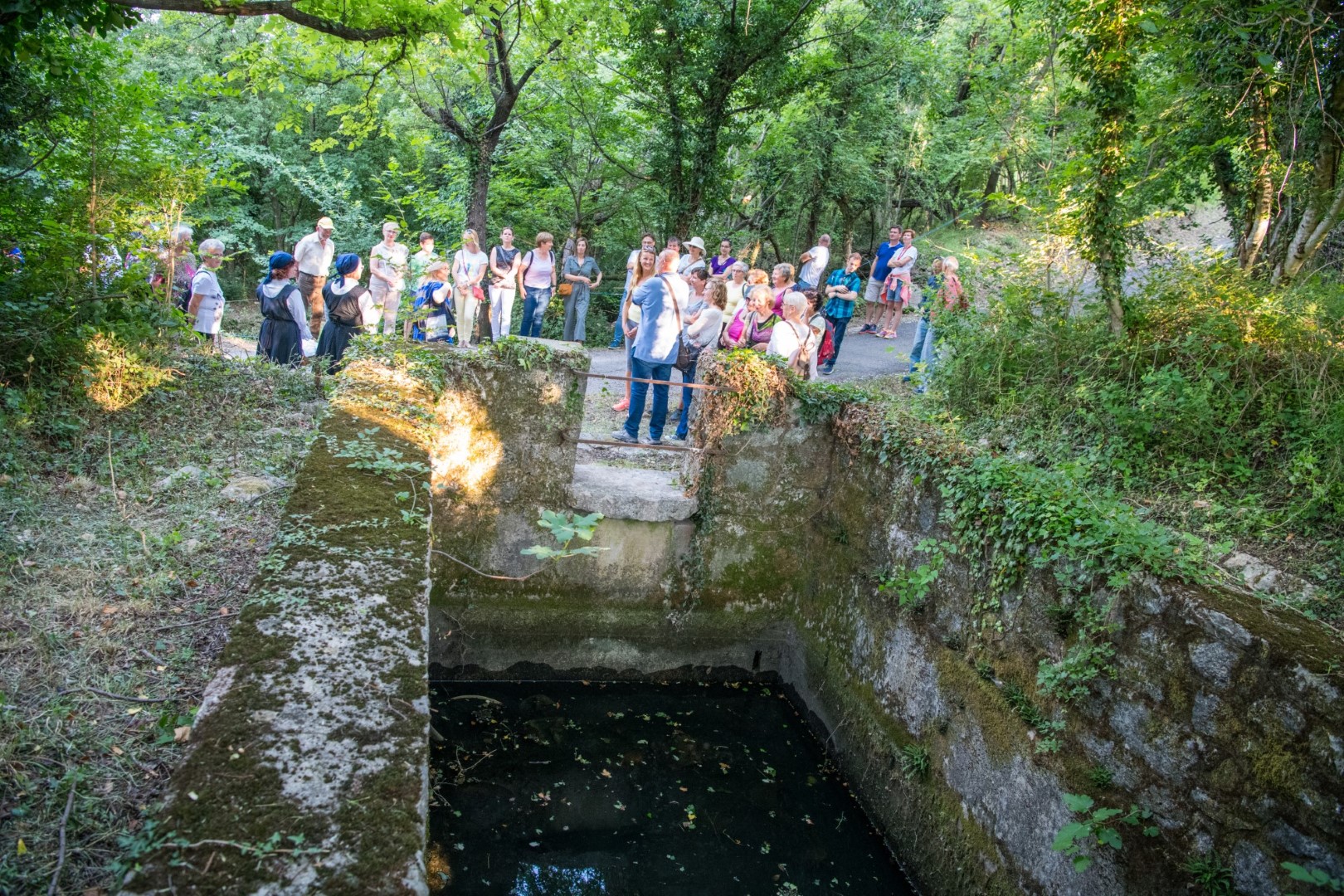 4. INCENTIVES FOR FARMERS IN THE 19th CENTURY

The people of Praputnjak were forward-thinking as early as the end of the 19th century. The Praputnjak Company from 1882 to 1900 on the basis of a land subsidy, distributed for free, among other things, large amounts of seeds, seedlings of vines and fruits, breeding cattle, and agricultural tools and machines, which enabled the people of Praputnjak to successfully engage in agriculture, especially growing grapes and keeping livestock. 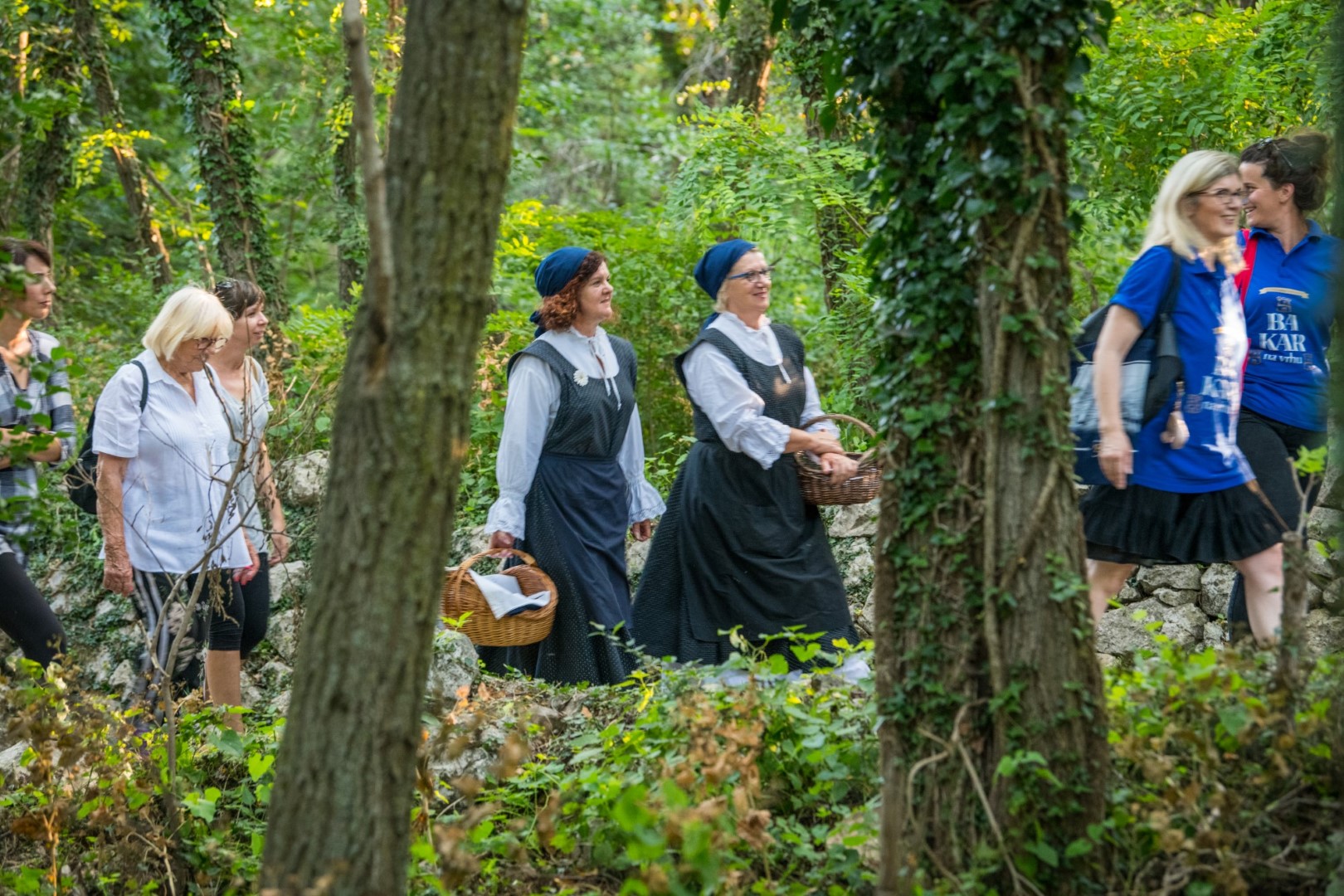 Caretakers of the heritage of Praputnjak

Due to its position and dry-stone walls, Takala, part of Bakar’s dry-stone terraces, was declared the first registered cultural landscape in the Republic of Croatia under the protection of the Ministry of Culture. 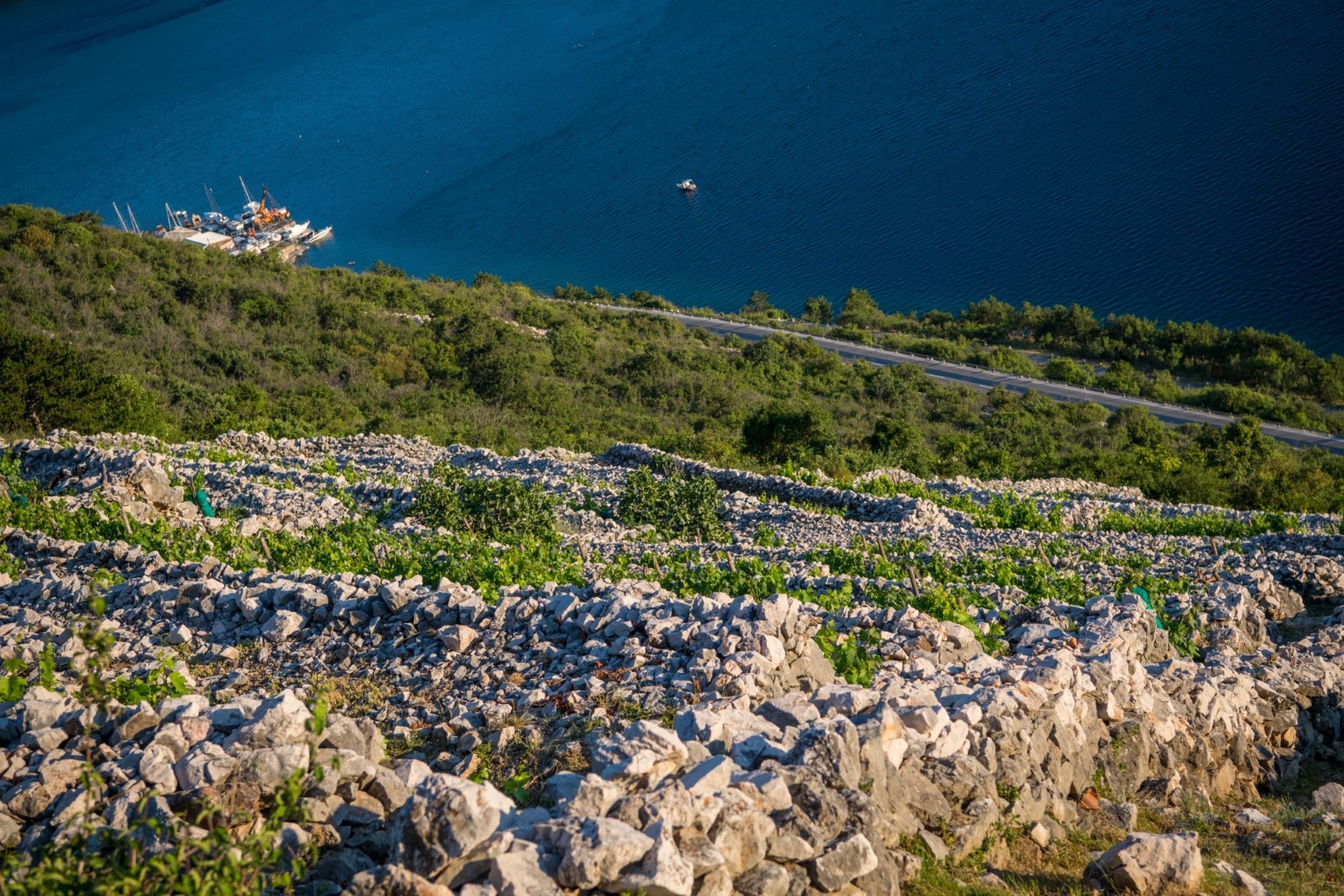 The well-known sparkling wine Bakarska vodica was produced in the Takala area, which provided the people of Praputnjak with significant income. The annual production at the end of the 19th century was 30 wagons of wine per year, and for the value of one year of harvesting and selling wine, a beautiful brick residential building could be built in the village. 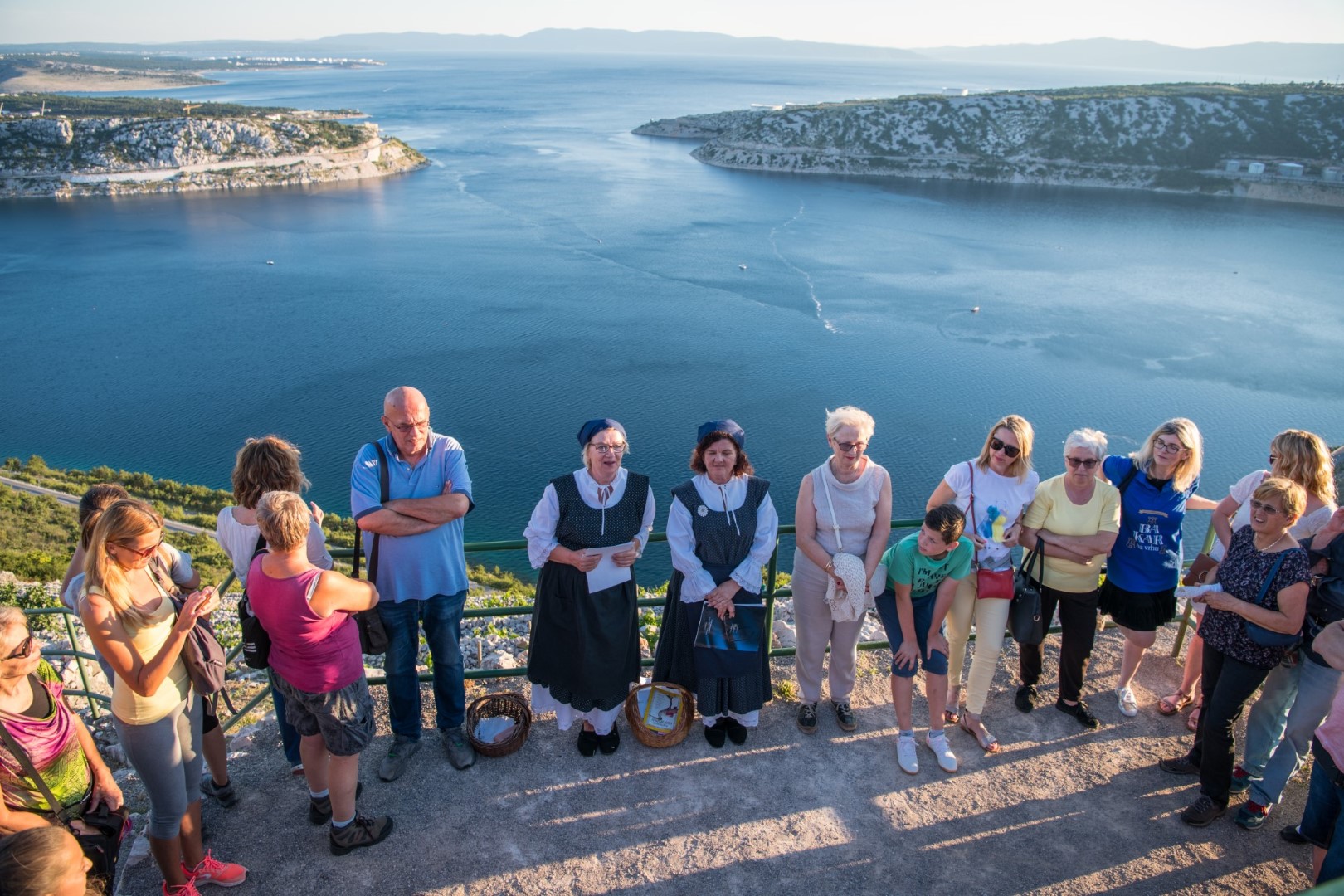 As there are no cellars in the Primorje, the grapes were taken to taverns in Praputnjak, where the work of producing top-quality sparkling wine, due to its purity and orderliness of the procedure, was performed exclusively by women, which is a rarity in Europe. The production of Bakarska vodica in taverns is slowly disappearing and dying out. The Antić family is the last to produce it the old way on their family farm. 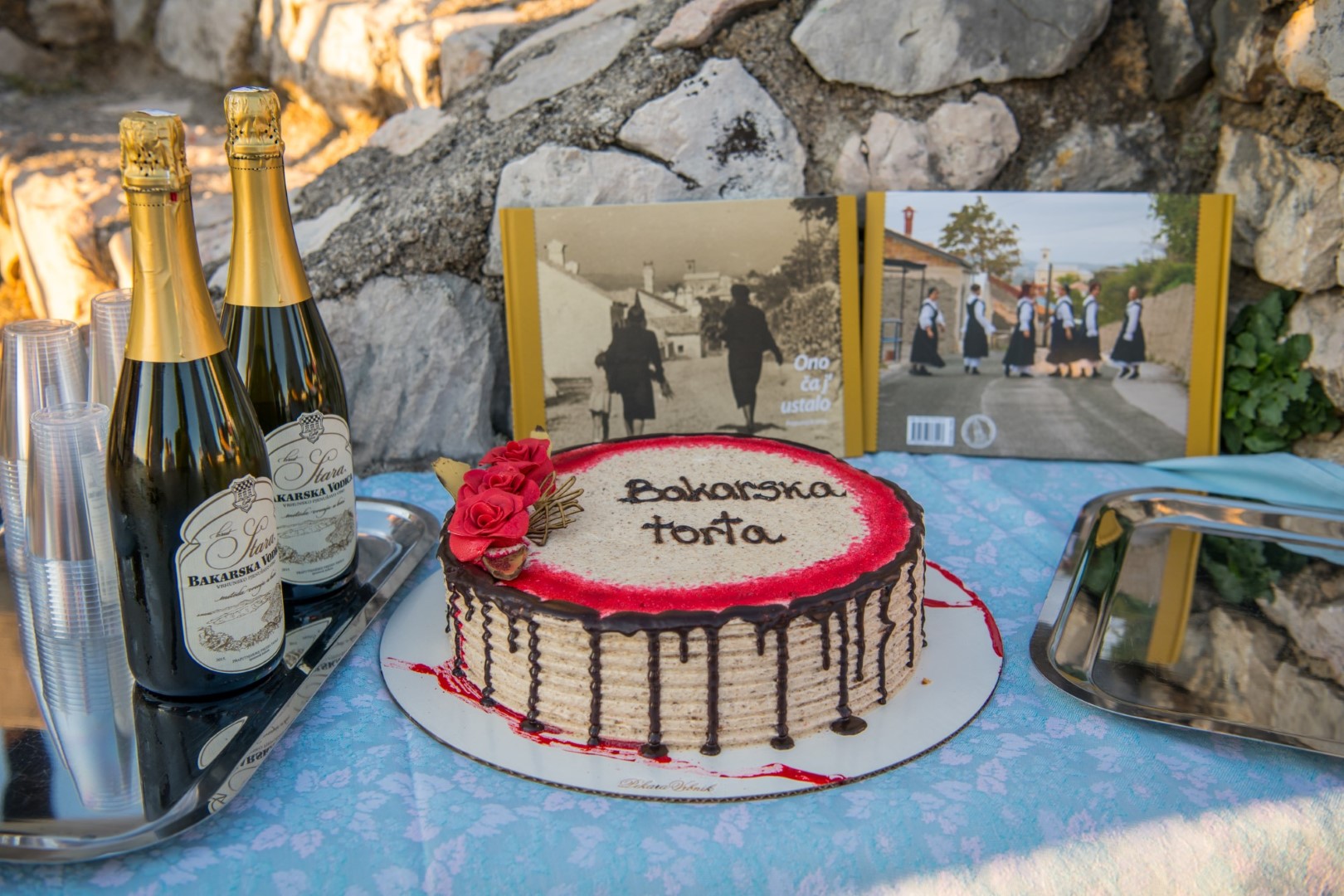 The phenomenon of steep dry-stone terraces was noticed in 1962 by National Geographic. It ran the story of Viktor Tadajević’s vineyards and the painstaking way of cultivating them. Journalist M. Grosvenor was fascinated by the steepness of the vineyards above the sea. He wrote: “Coastal ships sail so close to the shore that you can almost pick grapes from decks!” 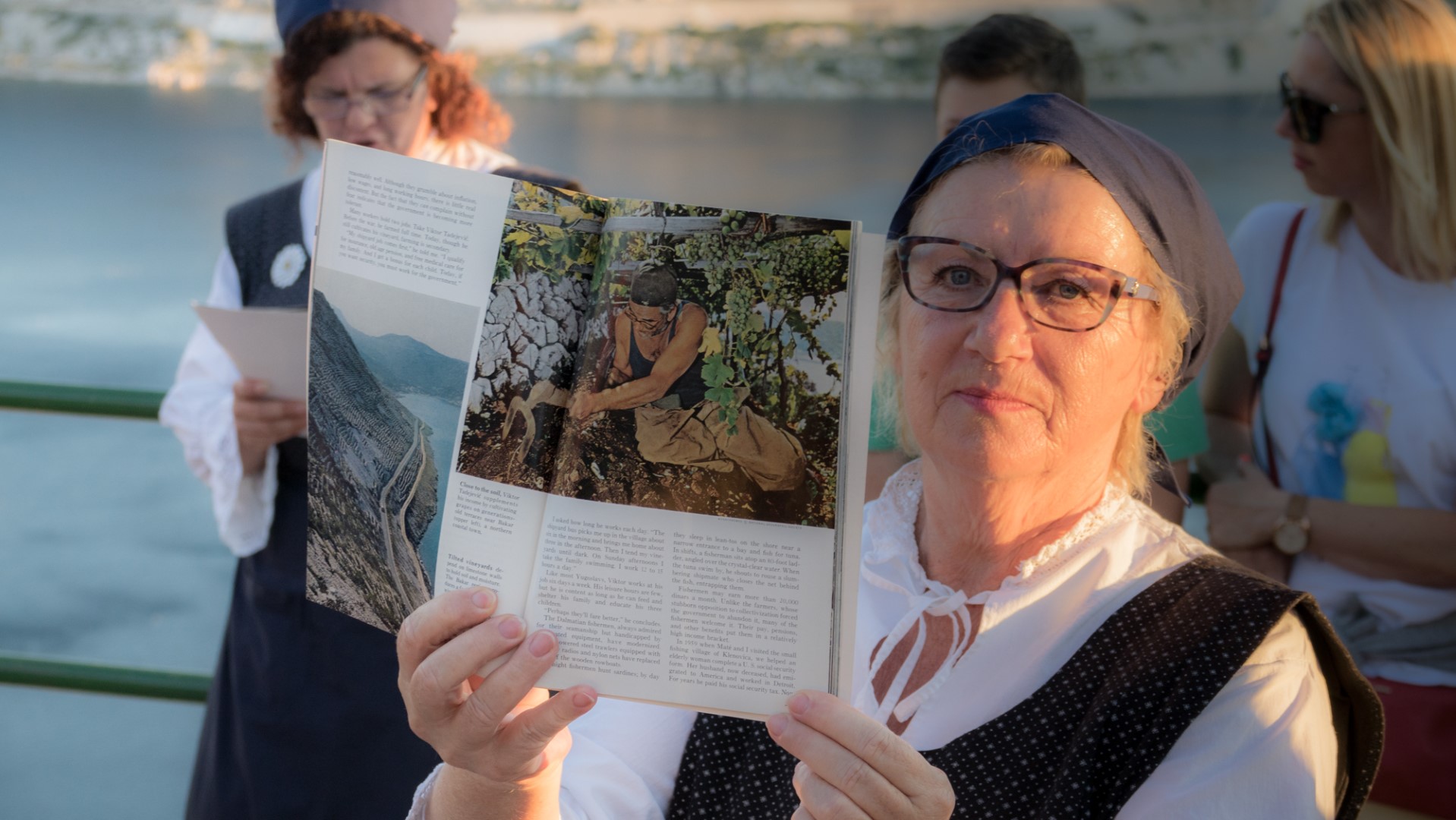 9. A VILLAGE AT THE TOWN LEVEL

In Praputnjak, it is said that every litre of Bakarska vodica sold was invested in the education and progress of the village, which in many ways reached the level of the town. People of Praputnjak who emigrated had also been sending their earnings, so the monumental church of St. Joseph was erected through the efforts of emigrants who had been digging the Suez Canal. Many of them were illiterate and they educated their children so they could correspond with their families at home more easily and cheaply. 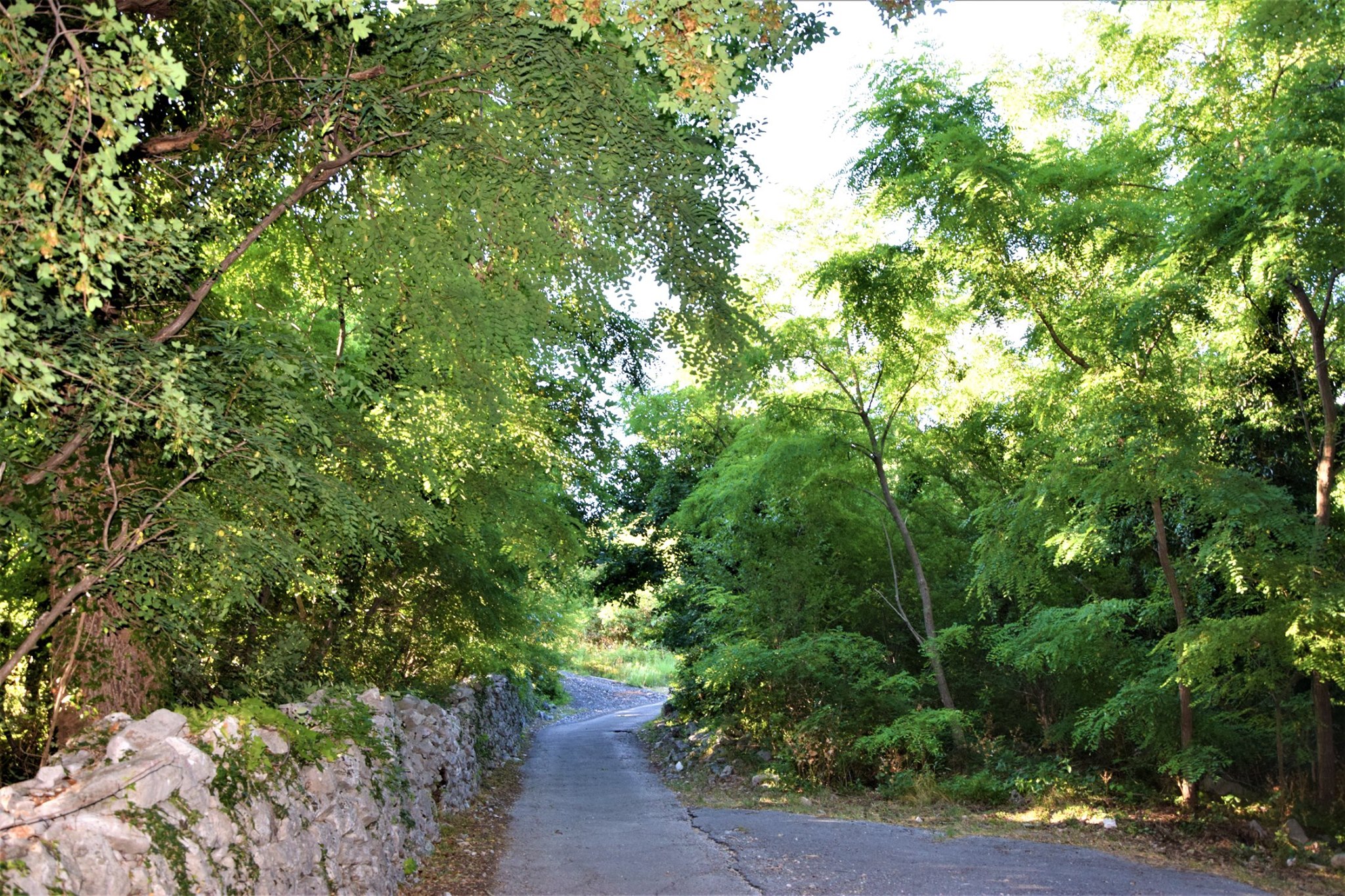 10. REVIVAL OF THE WOMEN’S TRADITIONAL CLOTHES

The black-and-white costume called “vrhnja” was the usual workwear (obučivalo) of diligent Praputnjak women who cultivated the land. It is made up of several layers: fris (petticoat), stomanja (shirt with wide pleated sleeves), vrhnja (outer garment), tarvez (apron), papuči (slippers) and rubac (headscarf). It is proudly worn and kept from oblivion by the ladies of heritage associations of Praputnjak. 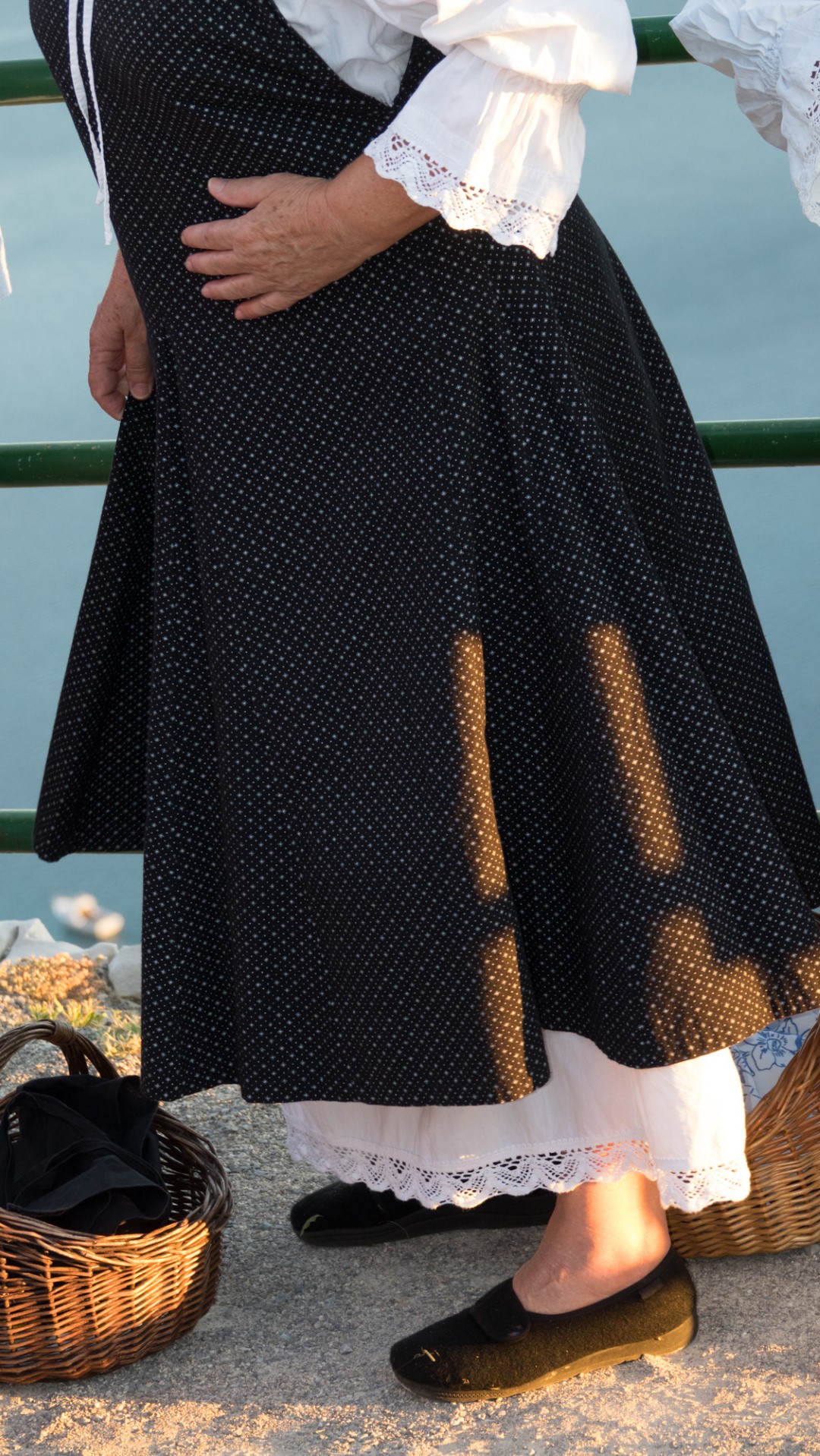