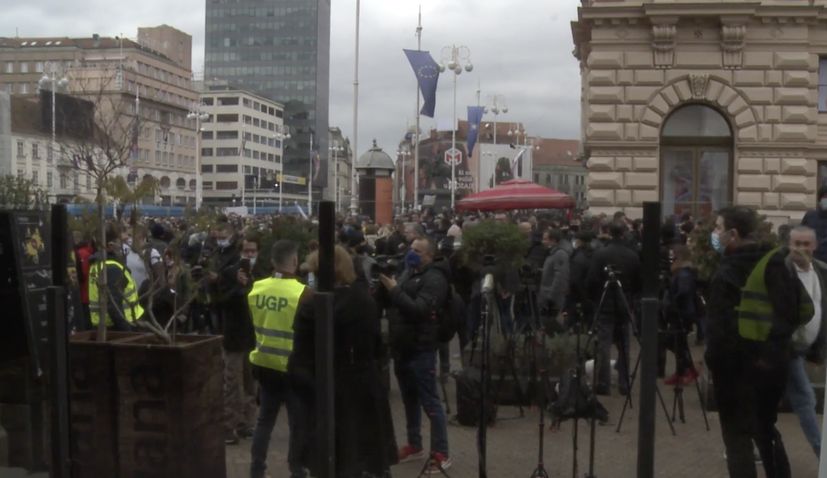 ZAGREB, 3 February (Hina) – Participants in a protest rally organised by the business association called “the Voice of Entrepreneurs” (UGP) in Zagreb on Wednesday demanded the cessation of discriminatory measures, revocation of extra taxes and mandatory membership fees and the economy minister’s resignation.

According to some estimates, several thousand people attended the rally in Zagreb’s main square. Although the UGP association called for abiding by anti-epidemic rules, a considerable number of people in the crowd were without protective face masks and it was difficult to keep the necessary physical distance.

The UGP leader Hrvoje Bujas should have addressed the rally, however, a representative of this association, Dražen Oreščanin, said that Bujas could not attend because he had contracted the novel virus.

Before the protest rally, which the organiser called “A loud cry by entrepreneurs that will shake Croatia!”, the business association said that during the rally, business owners and freelancers as well as employees and citizens would be given an opportunity to say what they think.

This business association accuses the government and the national COVID-19 crisis management team of letting them down.

During the rally, Oreščanin said that they asked the government to provide the owners of closed businesses with compensation, at least a one-off grant, as people had nothing to live off due to the closure of their businesses during the corona crisis.

The crowd shouted that Economy Minister Tomislav Ćorić should step down.

A participant in the rally, Ana Lisak, who comes from the catering industry, told Hina that this sector was recording a downturn of 70% and that the fact that they could deliver food outside their facilities had not eased their situation. She recalled that many of the businesses in this sector were on the verge of collapse.

A representative of the Zagreb association of restaurateurs, Žaklina Troskot, told Hina that the anti-epidemic measures imposed by the government were “discriminatory and totally unfair”.

“The expectations of the government that (the ban on) the two sectors: catering industry and fitness industry would protect the people against the pandemic is for us totally unacceptable, and we are desperate.” She said that any kind of aid would be welcome.

At the beginning of the rally, several opposition politicians, including Hrvoje Zekanović, Željko Sačić, Marko Milanović Litre, Zlatko Hasanbegović, who represent opposition right wing parties as well as opposition politicians from the left part of the political spectrum, such as Marijana Puljak, were seen among the crowd in the square.

The GLAS party, led by Anka Mrak-Taritaš, issued a statement in support of the protest rally, urging the government to immediately create equal conditions for all businesses despite the current epidemiological situation.

Also among the participants in the rally was Viktor Šimunić, an independent councillor from Orosavlje, who came into the media limelight after an audio recording of his conversation with HDZ official Žarko Tušek, in which they negotiated possible cooperation ahead of local elections, was made public. The recording, made secretly by Šimunić, shows Tušek offering Šimunić help in financing his election campaign as well as possible public posts after local elections in exchange for Šimunić’s support for the HDZ platform.

In attendance was a gym owner, Andrija Klarić, who recently reopened his gym despite the crisis management team’s ban, after which he was arrested and later released from police custody. Asked why he defied the ban, Klarić told the press that there was no reason for extending the ban on gyms after 31 January.