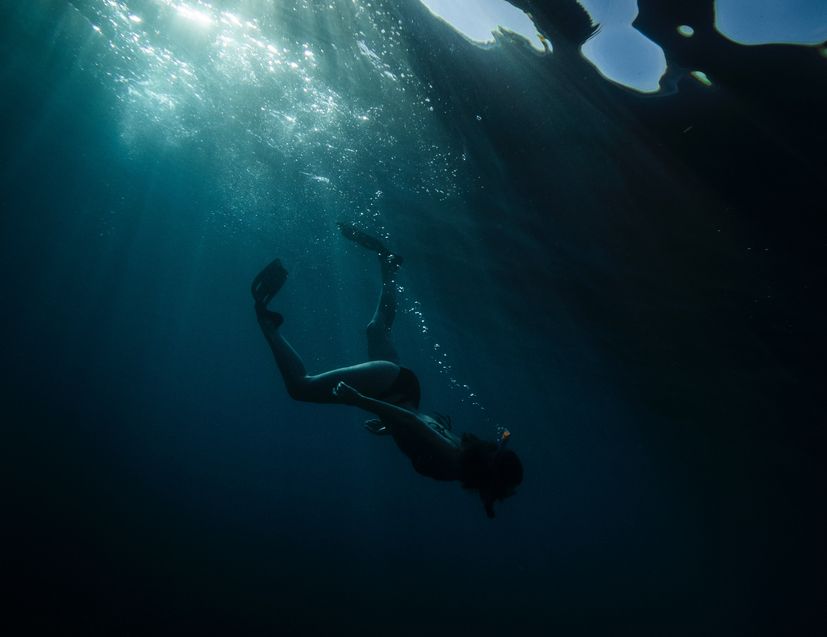 Croatia is famous for many things on land, such as the Walls of Dubrovnik, Diocletian’s Palace in Split and the many National Parks, but it is also one of the best places in Europe to explore underwater.

With more than 1200 islands off its coast surrounded by reefs, wrecks and underwater caves, Croatia is one of the best European countries to go snorkelling and scuba diving.

Unforgettable Croatia have compiled a guide showcasing the very best diving sites to explore the country’s underwater worlds including a 1944 Boeing B-17G plane wreckage, an 1899 merchant vessel and a specially designed underwater park with historical exhibits.

The Best Diving Spots In Croatia

Baron Gautsch is known as one of the most beautiful diving spots in the whole of the Adriatic, so it’s no surprise that it’s made our list of one of the best places to dive in Croatia. The site is the location of a sunken ship that hit a mine on the open sea near Rovinj in 1914, taking almost 300 passengers down with it and becoming one of the greatest nautical tragedies of the entire Dalmatian Coast.

Divers can reach the wreck of the Austrian SS Baron Gautsch by dropping directly down from a buoy marking the site’s location, requiring a sufficient level of experience that means this spot is not suitable for beginners. Those who choose to explore the site will be treated to incredible views of the steel carcass of the ship, along with chances to spot algae, sponges and coral that are home to many varieties of aquatic life.

Lošinj Underwater Park is an artificial diving spot that has been created within the Diver Lošinj diving centre in Čikat Bay, offering visitors the chance to not only enjoy a scuba diving experience but also learn about the history of the area.

The park consists of 11 different diving areas that range from 5 to 15 metres deep, making this a spot that is ideal for divers with no prior experience. You can explore the various historical items exhibited under the water that each link back to a section of Lošinj’s history, which include anchors from the 4th and 5th centuries, machine guns from World War 2 and a statue that is believed to have been made from the 2nd – 1st century B.C. 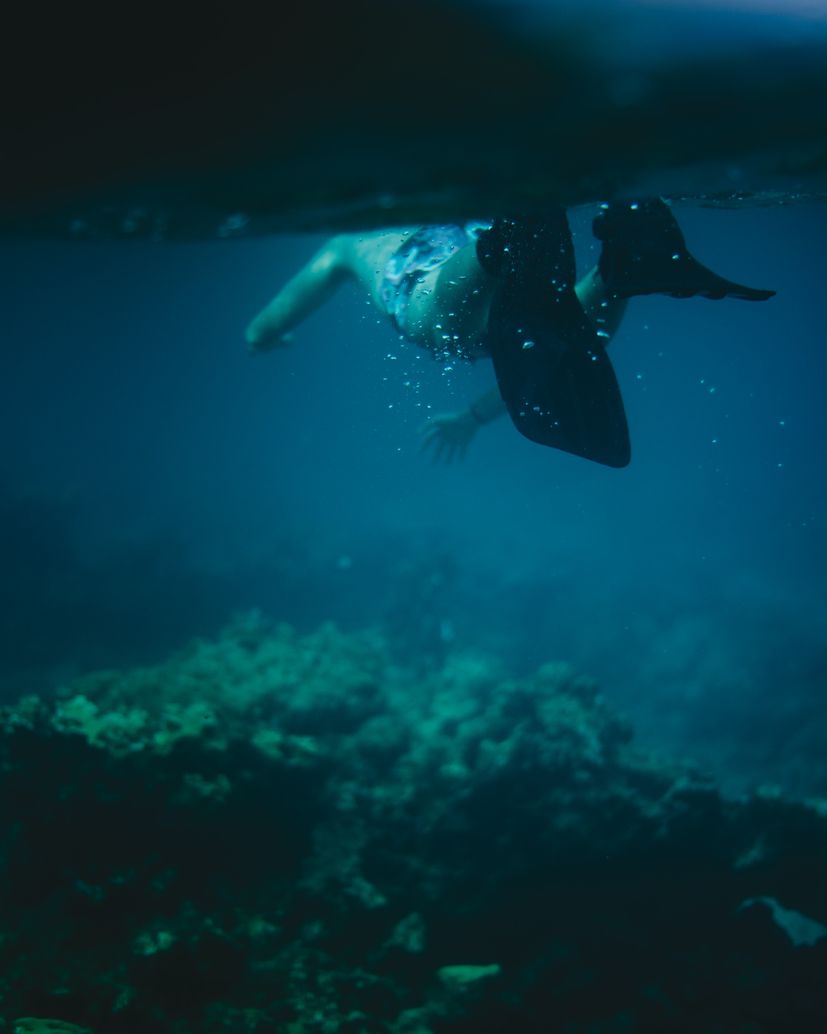 If you’re a fan of WW2 history then this diving spot off the coast of Vis island should be right at the top of your list. The significant depth of this wreck has meant that the 1944 Boeing B-17G plane is almost perfectly preserved under the water, so whilst you need to be an experienced diver to reach it in the first place, the trip is a truly unique opportunity with a fascinating story behind the site.

Odisejeva Špilja translates to ‘Odysseus Cave’, referring to the legendary Greek figure who was said to have taken refuge on the coast of Mljet island during his famous ten-year journey. What makes the cave such a special spot to dive is that at noon every day the sunlight floods into the cave through two different openings and fills the space with a magical blue light that reflects off the waves onto the walls.

There are various stories attached to Odisejeva Špilja, making it a very popular spot for divers of all abilities who can access the cave either from the large entrance on the coast or by jumping down into the water and swimming through a channel.

Katedrala Cave gets its name from the Croatian word for ‘cathedral’ because of the huge size of the main cavern and its high, porous ceiling. The cave is located off the coast of Premuda island in the Zadar archipelago and is reached by boat and then a dive of up to 30m down into a series of underwater halls.

Only experienced divers are advised to tackle an exploration of Katedrala Cave, as the depth is significant and several tunnels need to be carefully traversed. Those who do visit the spot will be treated to a brilliant array of marine wildlife including crabs, octopi, sponges and coral, as well as a ‘stained glass’ effect of the sunlight from above shining through the holes in the cave walls.

This diving spot is found off the coast of the small, uninhabited islet of Rašip which is part of the Kornati National Park in the northern area of Croatia’s Dalmatian Coast. This national park is known for being one of the best places to dive in the whole country and this spot, in particular, has a varied topography under the water that is home to a range of marine life.

The key feature of this diving spot is a large rocky wall that drops around 65m, making it a location better suited to more experienced divers. Sponges, starfish, greater amberjacks and forkbeards can all be spotted around this underwater habitat, so it’s a great spot for admiring a range of aquatic flora and fauna. Lučice Cave is found off the southeast coast of Brac island; the largest island in Dalmatia and a great place for snorkelling and scuba diving. The underwater cavern can only be reached by boat and has two different entrances that descend vertically and lead to a chamber around 25m below the surface.

Entering Lučice Cave can be tricky, which is why this is a dive site better suited to those who have some experience. If you’re really feeling brave you can explore the cave’s lower tunnels, but these don’t receive any sunlight so will require torches.

Taranto is another shipwreck diving spot that is located only a short boat ride from the coast of Dubrovnik, favoured by experienced divers who can handle descents of over 20m.

The Taranto was a merchant vessel from 1899 that struck an underwater mine in 1943 and sank after running into the Grebeni islands. The wreck has now become a fascinating habitat for a variety of marine life, including schools of various fish, octopi, lobsters, sponges and anemones.

Margarina Reef can be found off the west coast of Susak island and is a great spot for those who have some diving experience but don’t want to attempt any significant depths. The site can be reached by boat and includes a canyon and a marine wall that are home to a colourful array of sponges, sea squirts and coral as well as tuna fish and octopi.

Those diving in the Margarina Reef can also explore the remains of an ancient shipwreck that was carrying construction materials centuries ago and has now littered the seabed with tile shards and stone columns. This spot is particularly popular because of the variety of underwater scenery on offer, so it’s well worth the journey.

The island of Sv Andrija is part of the Elaphite archipelago to the northwest of Dubrovnik and has been home to a lighthouse since the late 1800s. Legend has it that this lighthouse was the site where a pair of forbidden lovers decided to end their lives together by jumping from the cliff rather than living the rest of their lives apart, and it is around this spot that the majority of divers explore when they come to the island.

This diving spot might not be suitable for total beginners, but those with a little experience can enjoy descending beside the cliff wall and admiring the pink algae and rare red coral that grow there. Those who reach the seabed will discover even more marine life, including damselfish, triplefins and Haliclona Mediterranean sponges. 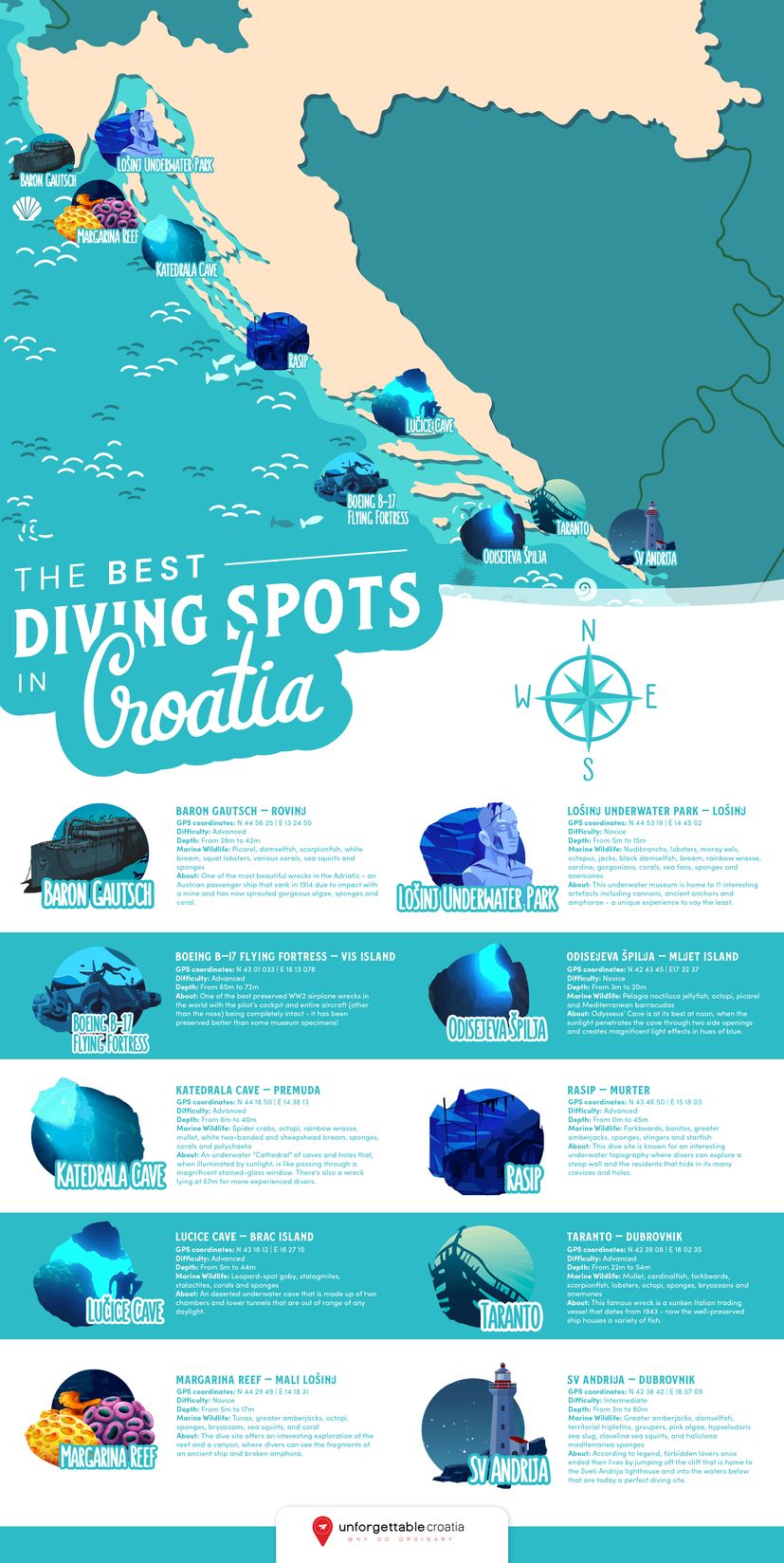