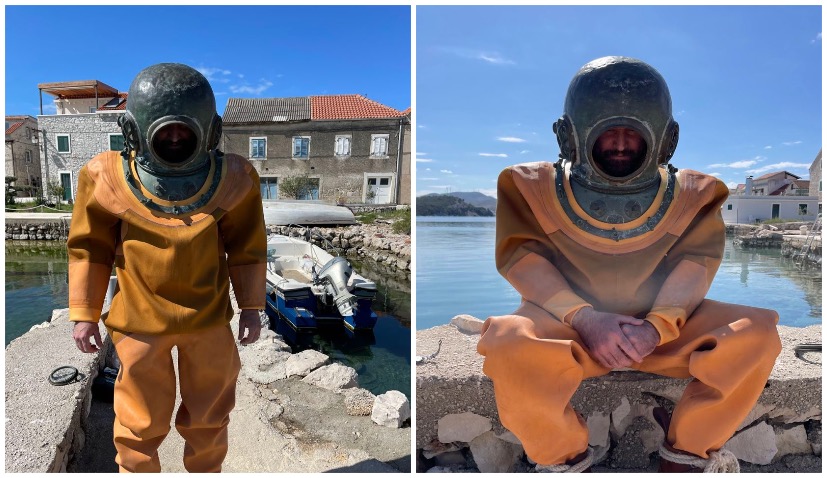 Visiting the Croatian island of Krapanj and its unique sponge divers

The small Croatian island of Krapanj is known as the smallest and the least inhabited island in the Adriatic, and it is only 300 meters away from the land. The tradition of sponge harvesting in Krapanj starts back at the end of the 17th century. At the end of the 17th century a certain fra Antun came from Crete to serve in the Monastery of Krapanj.

In time he started teaching the locals how to harvest and clean the sponge and even organized it to be sold in Venice. In the beginning of harvesting the sponge (“spuga”) was harvested only with spears in lower depths. It was only later that the diving equipment was introduced.

By the end of the 19th century the spuga harvesting crew had some eight members and only two or three of them were divers, two were rowers, two were handling the air pump, while two were treading, cleaning and drying the harvested sponges. Back then sponge harvesting was forbidden every third year so that its habitats would not be devastated. 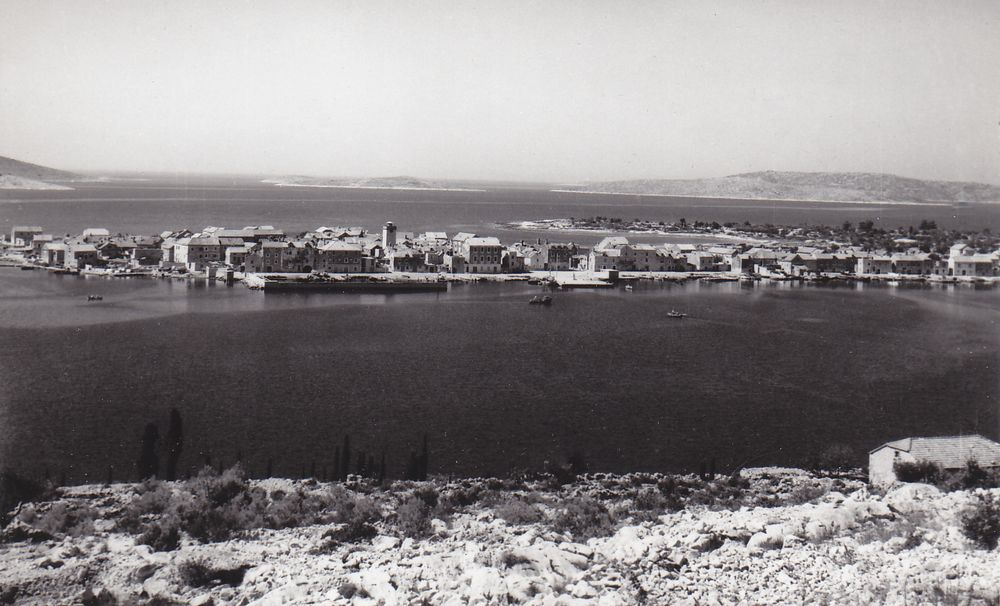 In 1911, among the people who were harvesting sponge on Krapanj there were 16 divers, they had 6 diving devices and 30 boats and they founded a cooperative. Since the Second World War brought some unfortunate losses, the spongers received a financial help from the maritime administration, so in 1930 a small shop opened in Krapanj, processing sponges.

Today in Krapanj there are only several sponge harvesting crews, and the modernization brought the opening of a small refinery for processing, which used to be done manually. People from Krapanj will tell you that spuga harvesting begins with the first summer crickets and ends with the coming of October.

During winter they are not to be harvested, because that is the beginning of their process of renewal and reproduction. They are very proud of their tradition and it is present everywhere, from the moment you first step on the island where everything is dedicated to the sponge. 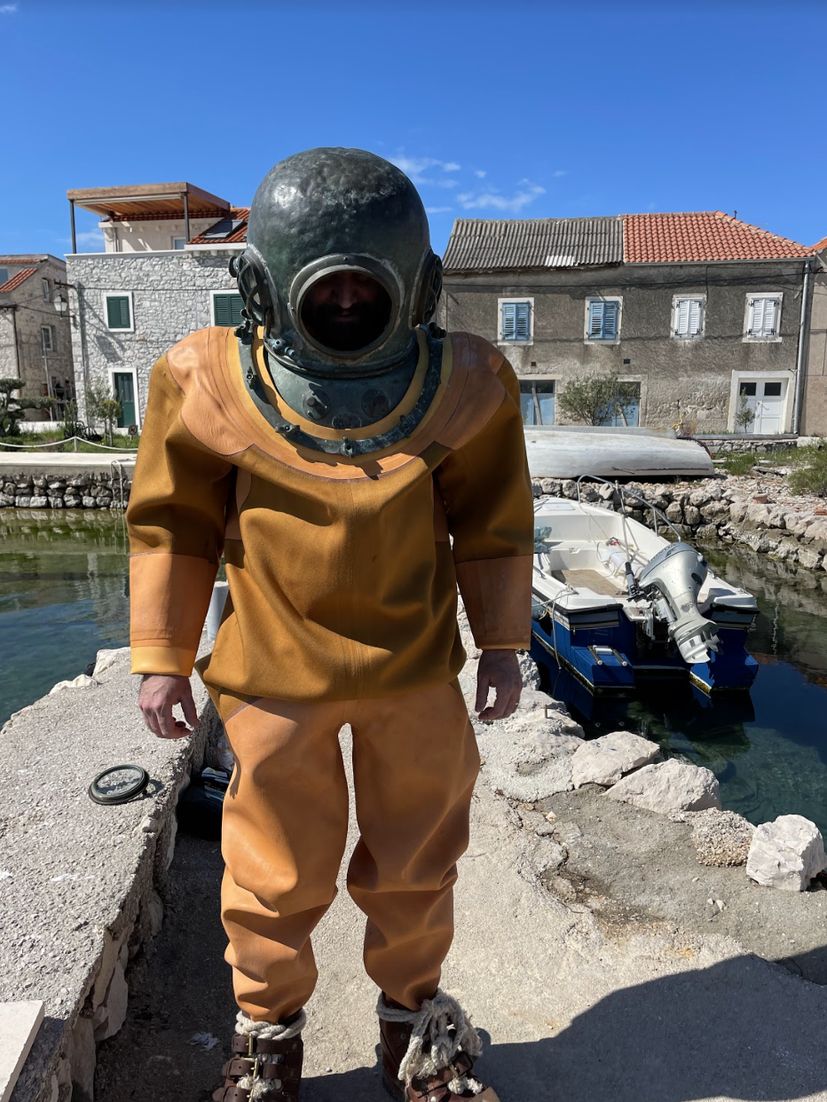 During my arrival on Krapanj, I visited the museum of the Tanfara family, where I was greeted by Roko Tanfara, who was ready to tell me something about Krapanj spongers. Roko is one of the last active sponge hunters and an advocate for preserving this tradition, and his son is preparing for his first dives, continuing the family tradition.

I was fascinated by the encounter with the old diving equipment that divers had to put on when descending into the depths. Equipment weighed as much as 80-85 kg, helmet and collar 22 kg, each shoe 8 kg, suit and hose 28 kg, and the diver was also armed with 2 weights of 15 kg each that were supposed to help him sink to the bottom.

Just imagine the feeling of putting all this equipment on himself. Roko wanted to present this venture to me live. Of course, he couldn’t dress himself, so his assistant helped him. Unfortunately for me, I visited Krapanj in the winter months and this was not the time for him to dive in in this old suit, but I got the an invitation from Rokó to come back sometime in the summer so that we can record it for the instagram audience of Forgotten Dalmatia. 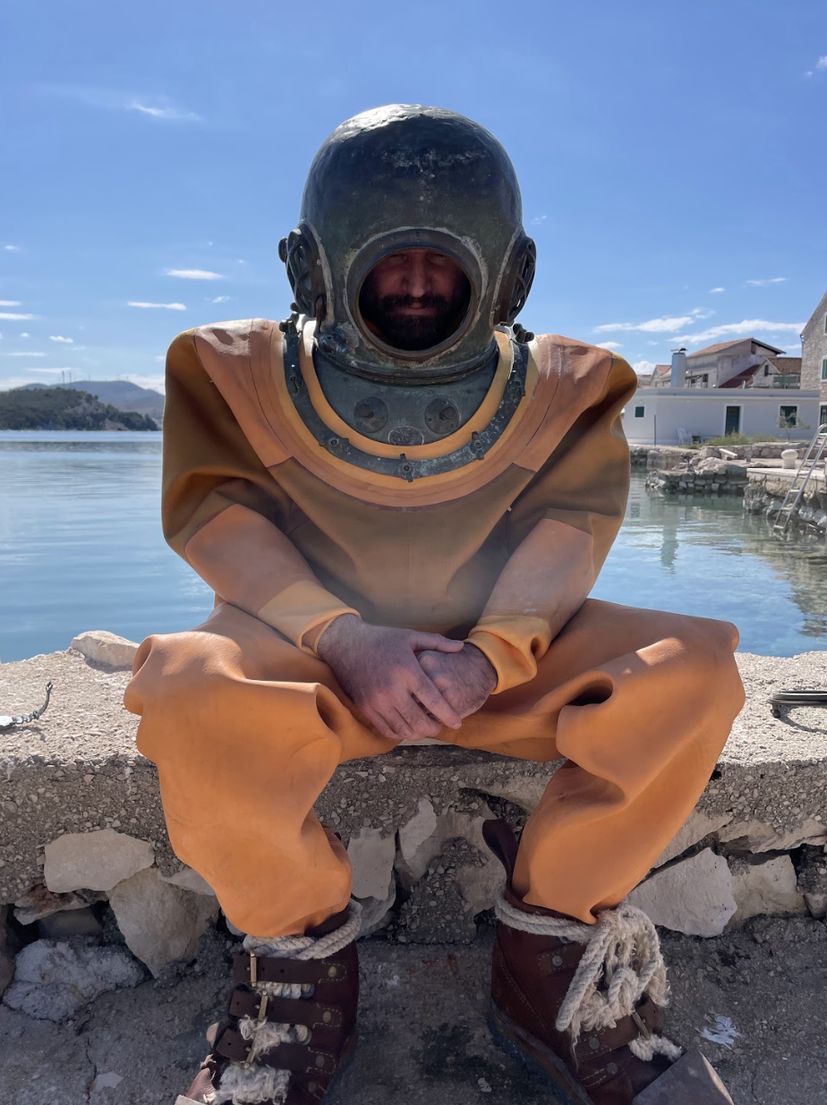 Ready for a dive

I feasted on the hospitality of this family, especially in the stories of Roko´s father. In their search for sponges, he and his crew visited almost all the Adriatic islands and have incredible experiences. He also recalled a completely unrealistic scene for the circumstances in the Adriatic – a stranded whale on the banks of Silba.

The diver’s working depth was usually 20-30 meters deep, and the maximum depth was even 120 meters. Divers would continuously dive and surface for several hours looking for sponges, so just imagine how much physical fitness it required. These people had lungs like real dolphins, and Mr. Tanfara remembers the time when divers would carry with them 10 kilo stones on the boat to serve as weights. Every millimeter of air in the lungs had to be saved.

There is an incredible story that happened to the spongers from the Tanfara family in the 1930s in the channel between Pelješac and Korčula. There, during the search for sponges, one of the crew members lost consciousness after surfacing. His body died, he went into a coma, and everyone was convinced that he had died. 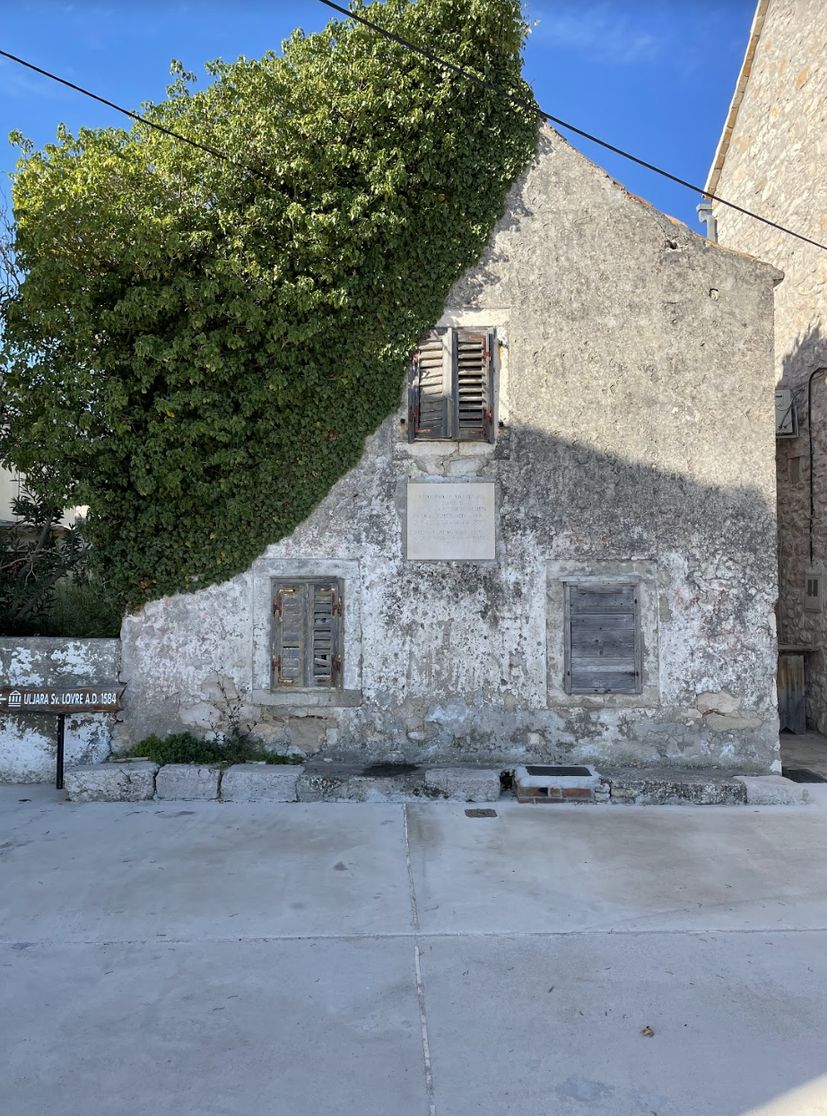 Considering that the custom dictated that those who passed away were immediately buried within one day of the death, the funeral was carried out immediately the next day in nearby Račišće. Two days after the burial, a local woman from Račišće was passing by the cemetery with her flock of sheep and heard screams coming from the cemetery. Frightened, she immediately ran to the pastor and asked him to go to the cemetery to pray for the dead souls.

The voices she heard were the desperate cries of a diver, who woke up from a coma in the darkness of the tomb, and tried to get out of it, which of course was not possible. The priest refused to listen to the woman’s pleas, and the unfortunate man in the grave, in the middle of the heat and dehydration, soon really died. Silence reigned in the cemetery again, and the truth about this event was only revealed years later when the tomb was being opened for the burial of a new deceased. 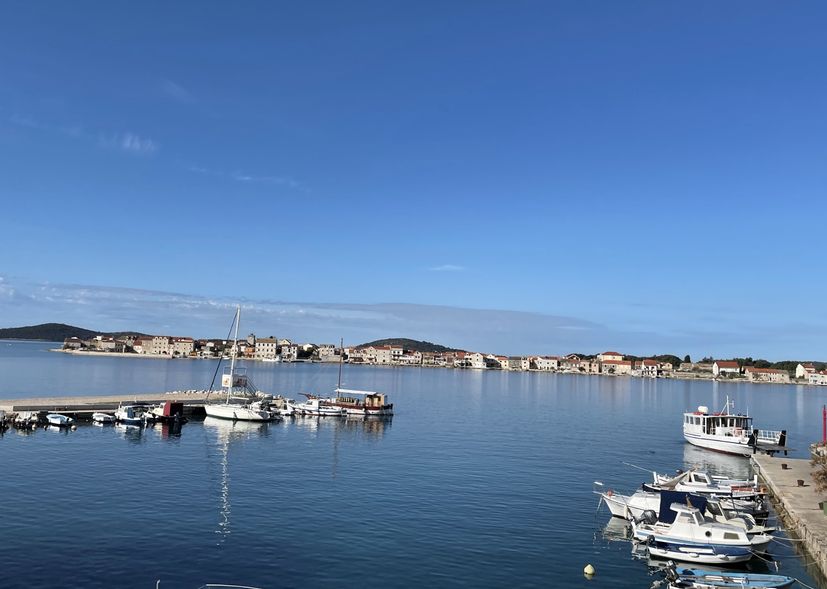 Then an unfortunate diver was found in a sitting position in the corner of the tomb. We can only imagine the horrified looks of those present when they saw such a scene.

I left Krapanj incredibly proud that I had the opportunity to learn something about sponges. You only need a couple of hours to tour Krapanj, with the inevitable visit to the monastery, and I recommend it because of its charisma and uniqueness, as well as its proximity to the mainland.

The drive from Brodarica to Krapanj takes only five minutes, and on Krapanj you will feel a touch of the real, true Dalmatia, but also meet people who are engaged in exceptional skills. They deserve their own chapter in every story that talks about the peculiarities of Dalmatia and its people.

Igor Goleš is the author of the book Greeting from a Dalmatia long forgotten – A book which shows how life was between 1893-1940 – which is available HERE.