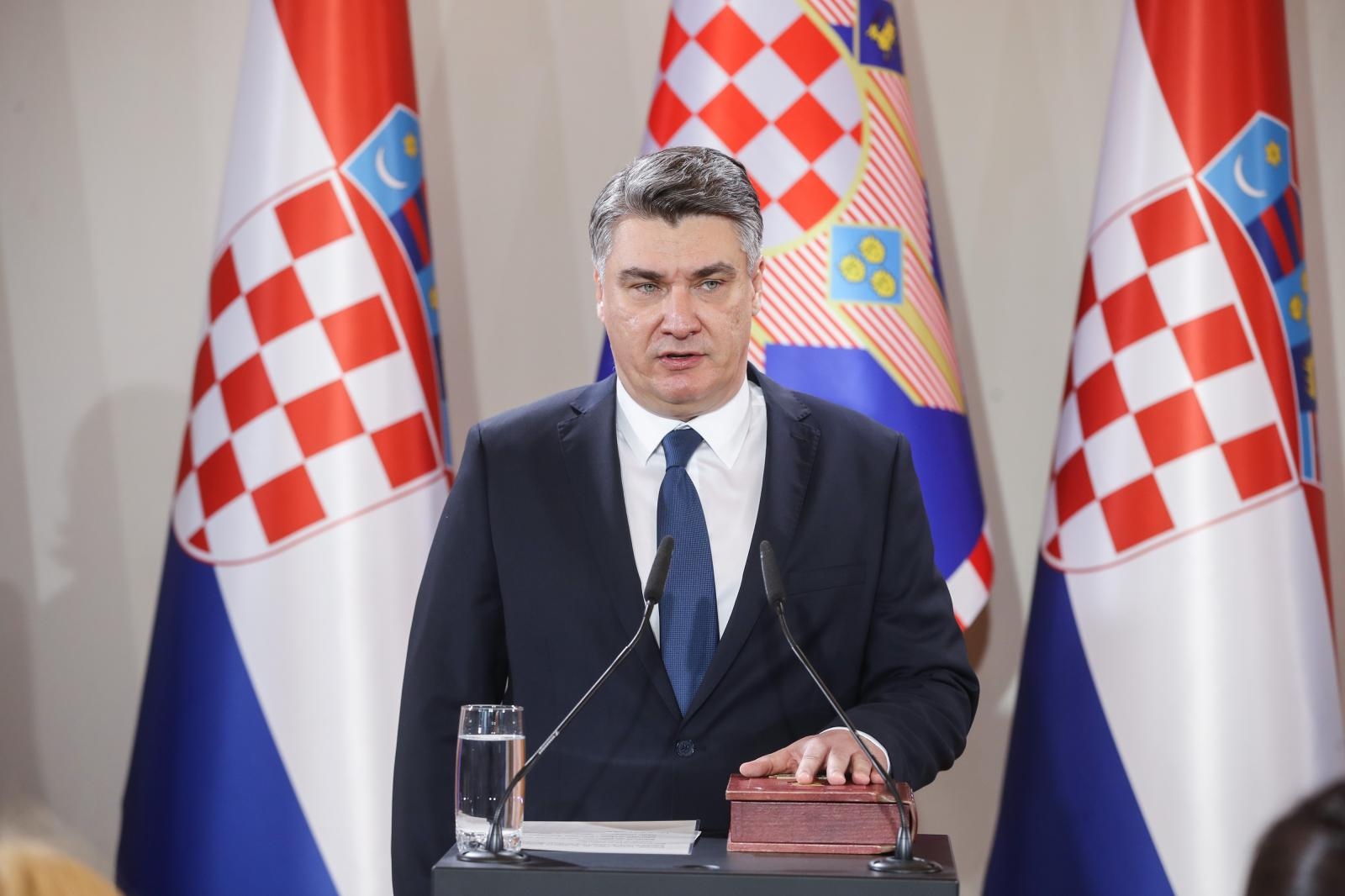 Zoran Milanovic being sworn in as the fifth president of Croatia today (Photo: Damir Sencar/HINA/POOL/PIXSELL)

ZAGREB, Feb 18 (Hina) – Zoran Milanovic has been sworn in as the fifth President of Croatia at a low-key ceremony on Tuesday in the President’s Office in Zagreb’s Pantovcak neighbourhood and not in Saint Mark’s Square as has been the tradition so far.

There were a total of 43 guests, the lowest number to date, including state officials, Milanovic’s family and members of his campaign team. It was the first time that a presidential inauguration was not attended by party leaders, diplomats and church dignitaries.

The ceremony started with the performance of the national anthem by Croatian pop and jazz diva Josipa Lisac, accompanied by pianist Zvjezdan Ruzic.

The first part of the ceremony included the oath of office and the President’s speech. A cappella vocal group of the Croatian Navy performed singer Vice Vukov’s song “Tvoja zemlja” (Your Country).

After that, there was short cocktails followed by the transfer of power ceremony.

Addressing the inauguration ceremony, Milanovic said that the truth and voters’ desire should be kept apart and that elections are not the way to find the truth but to reach a peaceful compromise between the opposed wishes of different people.

“It seems to me that there is only one right way, and that is full and active support by the government to academic and scientific independence and independence of the judiciary and media. That’s the strongest defence against tyranny, tyranny of any kind,” he said.

The scientific community, judiciary and media must work incessantly on perfecting the anti-corruption mechanisms. Protection and promotion of the independence of the judiciary, media and science are the most important constitutional responsibilities of the President of the Republic in ensuring the stability of government, Milanovic said.

He stressed that he is not going to be a corrective, but a constructive factor in areas of direct competence or co-competence of the President of the Republic, adding that this arises from the spirit of the Constitution.

The event was followed by 250 representatives of the media, including 66 accredited journalists, far more than the number of guests.

Milanovic was elected in a runoff election on 5 January, beating the incumbent Grabar-Kitarovic. He received 1,034,389 votes and she 929,488.

CV of the fifth Croatian president

Milanovic was the prime minister from 2011 to January 2016 as the Social Democratic Party (SDP) leader. He took the helm of the SDP in 2007 and stepped down in 2016 after the party lost the 2015 parliamentary election.

Milanovic was born on 30 October 1966 in Zagreb where he grew up and went to school. After graduating from the Zagreb Faculty of Law, he became an intern at the Zagreb Commercial Court, and then at the Ministry of Foreign Affairs in 1993. The following year he joined an Organisation for Security and Co-operation in Europe (OSCE) mission to war-torn Nagorno Karabakh (Azerbaijan). In 1996 he was appointed an adviser at Croatia’s mission to the EU and NATO in Brussels where he obtained his post-graduate degrees in European and Comparative Law in 1998.

In 2004 Milanovic left his position as assistant foreign minister and, at the invitation of the then leader of the SDP Ivica Racan, became a member of the party’s executive committee and secretary for international relations. After Racan’s death in April 2007, Milanovic was elected the party’s president in June of the same year, beating his rivals Zeljka Antunovic, Milan Bandic and Tonino Picula.

In 2007, the Croatian Democratic Union (HDZ) won a parliamentary election once again and Milanovic became the leader of the opposition as the SDP’s president and chairman of the party’s group in the Croatian parliament.

During the election campaign for the 2011 parliamentary election he signed a coalition agreement with the Croatian People’s Party (HNS), Istrian Democratic Party (IDS) and Croatian Pensioners’ Party (HSS), which was dubbed the Kukuriku (Cock-a-Doodle-Do) Coalition. On 4 December that year, the coalition won the election, securing 80 seats (an absolute majority) in parliament. After losing the 2015 parliamentary election Milanovic stepped down as the leader of the SDP and started a private consulting company. He announced running for president in June 2019.

Milanovic is married to Sanja Milanovic, an epidemiologist, and they have two sons.