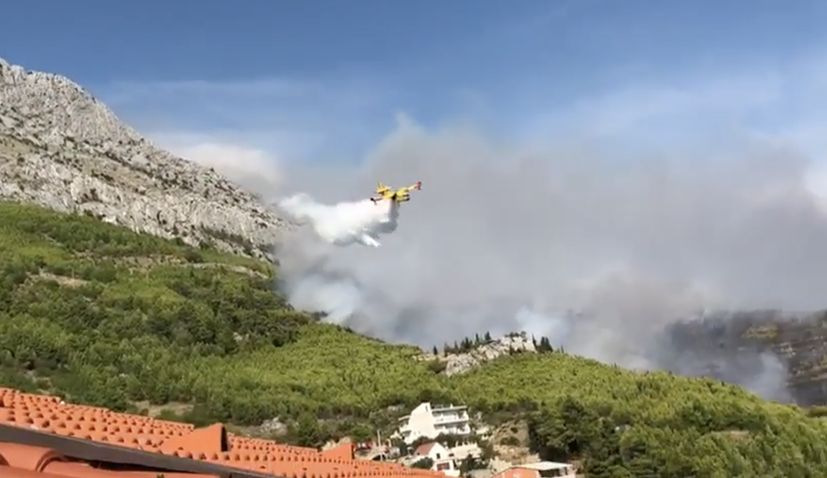 Wildfire breaks out near Omiš on Saturday (screenshot)

Serious fires have been raging on Saturday afternoon near Omiš on the Dalmatian coast.

18:40 – Police have confirmed that the Adriatic highway from Omiš-Dubci, which has been closed due to the fire, has opened again as the fire has been controlled.

18:15 – “The wind is too big, we have surrounded the fire, but hope to God that the wind does not pick up any spark because it is so dry that it is easy to burn. Houses have been protected and are no longer in danger, fortunately, nothing has happened to anyone,” Omiš Fire Superintendent Višeslav Pešić just stated.

17:46 – “The situation on the ground is still not satisfactory, but we have surrounded the fire, and we hope to put it under control tonight. So far we have no injured firefights,” Omiš Fire Superintendent Dražen Glavina told Hina.

Serious fires have been raging on Saturday afternoon near Omiš on the Dalmatian coast.

Firefighters and volunteers have been battling the blaze but due to strengthening winds the fire started to spread west and firefighters from all over Dalmatia joined the fight, Slobodna Dalmacija reported.

“Currently on the ground, there are 156 firefighters from 26 stations who arrived at the site in 40 fire engines. Four Canadair planes and two AirTractors are helping put out the blaze,” Commander Ivan Kovačević from Split said. Two fire engines were burnt in the blaze.

Another air tractor joined the effort and at around 5:15 pm, Omiš Fire Superintendent Višeslav Pešić said that the massive ground and air work battling the fires had produced results.