In July more than 500,000 people turned out on the streets of the Croatian capital to welcome home the silver medal-winning football team. Today the capital turned on another welcome party, this time for the new tennis world champions.

Whilst the weather was cold with threats of rain, it did not stop thousands gathering on Zagreb’s main square to welcome the team home on Monday. After landing at Zagreb Airport just after 2 pm, the team boarded a bus which took them to Trg Ban Josip Jelačić.

Zaprešić Boys performed their summer World Cup hit ‘Igraj Moja Hrvatska’ as the tennis players took to the stage. One by one they were introduced, first Marin Čilić, whose victory over Lucas Poullie yesterday sealed the win.

“Bonjour Zagreb,” Čilić jokingly greeted the crowd. “This is unbelievable, like a dream. Thank you for your support. We showed that we are the best.”

No better way to finish off an incredible weekend than with this team and these fans. HVALA ZAGREB! 🇭🇷🏆🎉🎾🇭🇷 . . #iznadsvihhrvatska #croatia #proudtobecroat #hrvatska #daviscup #champions #ovdjenitkonijenormalan #zagreb #teamcroatia

Borna Ćorić, who helped Croatia take a 1-0 lead in the final, told the crowd it was the best day of his life before leading them in a popular crowd chant. Prljavo Kazalište’s front-man then took to the stage to sing Mojoj Majci (Ruža Hrvatska), before celebrations continued.

“Just now I realise how big this victory is, we are world champions,” coach Željko Krajan said, adding that Croatia could say that per capita it is the most successful sporting nation in the world and not be embarrassed to say it.

Later in the afternoon, President Kolinda Grabar-Kitarović presented with honours.

15:10 – The team arrives on the main square where Zaprešić Boys were on the main stage singing their World Cup hit ‘Igra Moja Hrvatska’ before Marin Ćilic spoke to the crowd on behalf of the team and the Croatian national anthem was played.

15:02 – The team is on the bus on the way to the main square where thousands are waiting 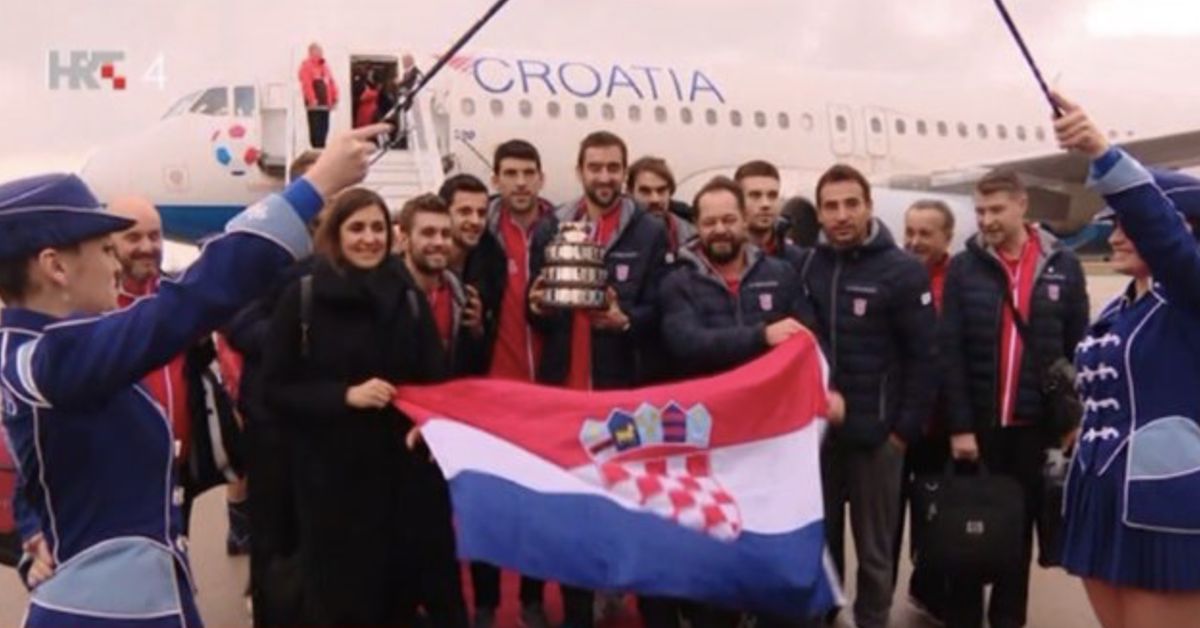 Marin Čilić and the team land in Zagreb (screenshot/HRT)

On Sunday, Marin Čilić beat Lucas Pouille in straight sets to seal the victory for Croatia 3-1 over France for their second title. Earlier Borna Ćorić gave Croatia a 1-0 lead before Čilić doubled it. Mate Pavić and Ivan Dodig went down in the doubles.

Celebrations went on well into the night in Lille, where around 2,000 Croatian fans had made their way for the match.