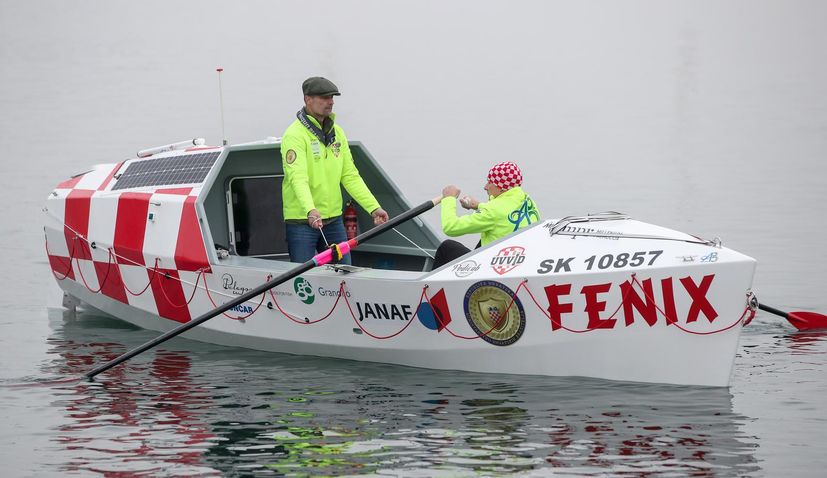 ZAGREB, 11 Jan (Hina) – Fenix, a boat in which two retired Homeland War officers plan to row across the Atlantic, was launched on Zagreb’s Jarun lake on Monday, and if they succeed, Croatia will join 31 other countries which have accomplished that feat.

The two will set off towards the end of the month and their trip is expected to last 90 days.

Project manager Dražen Hrženjak said the campaign was also aimed at warning about ocean pollution and the need to preserve all the world seas. He added that “Across the Atlantic Ocean with a Paddle” was “part of a story called ‘Atlantic Banovina’.”

The Banovina region in central Croatia was struck by a devastating earthquake in December 2020.

“As Werner and Martin row across the Atlantic, we will carry out a humanitarian campaign in Croatia called ‘One metre, one kuna.’ The funds we raise we will invest in a centre in Banovina. The centre will be called ‘Veteran Paddle’ because, in a way, they will build it with a paddle,” he said.

War Veterans Minister Tomo Medved said Ilić and Cruickshank were Homeland War veterans who today continued to promote the values which connected all defenders during the 1991-95 war – patriotism, unity and faith.

He said this endeavour showed that Homeland War defenders and veterans remained aware of the importance of everything they did in the past and that they were telling everyone it was never too late for big things.

The Fenix was also exposed to big waves to show its stability and was also sunk to show its strength in the extreme weather awaiting the two Croatian rowers in the Atlantic.