Home » Sport » VIDEO: Filip Hrgovic ready for his toughest test at ‘Clash On The Dunes’ 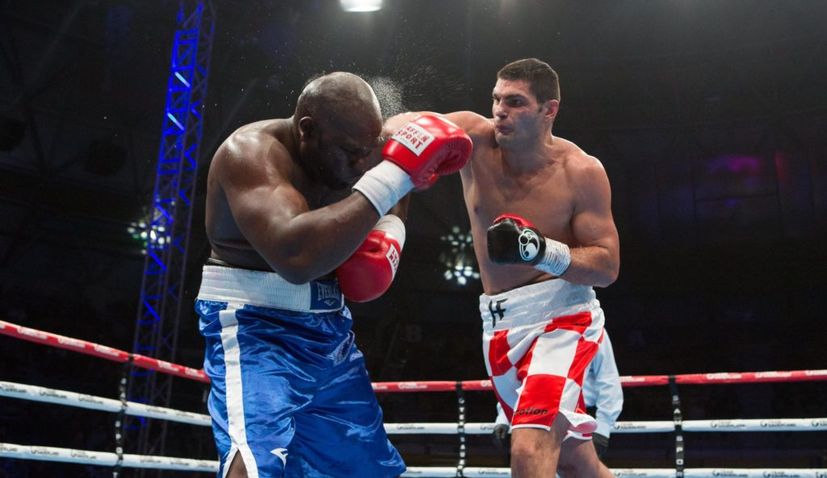 Filip Hrgović (9-0, 7 KOs) came face to face with his opponent Eric Molina (27-5, 19 KOs) for the first time at today’s ‘Clash On The Dunes’ press conference at the Diriyah Arena in Saudi Arabia ahead of Saturday night’s historic boxing event.

Hrgović, who won Bronze at the 2016 Olympics in Rio, continues his global tour of 2019 by boxing in a third different country, having already claimed memorable knockout wins over Gregory Corbin and Mario Heredia in the United States and Mexico earlier this year.

The 27-year-old, defending his WBC International Heavyweight crown, must now overcome his toughest career test as he goes in search of his tenth professional victory against the former two-time World Title challenger Molina.

“I’m feeling very good and I’m ready for my biggest fight so far. Thank you to Matchroom Boxing, Eddie Hearn, Team Sauerland, Zeljko Karajica, Sky Sports and DAZN. It’s an honour for me to be part of this great event.”

The experienced American Molina has already fought twice for the World Heavyweight title, facing both Deontay Wilder and Anthony Joshua, and is confident his resilience can see him cause an upset on Saturday night.

“This is an iconic sporting event. An iconic rematch,” said Molina. “I’m extremely thankful to be part of this event. When you start your career 0-1 this is all just a bonus, it’s just beautiful to experience.”

The Croatian heavyweight sensation known as ‘El Animal’ is putting together an impressive resume after nine fights, and promoter Nisse Sauerland believes Hrgović is already the biggest talent in boxing’s glamour division.

“The biggest problem we have with Filip is finding heavyweights that will fight him,” said Sauerland. “Eric looks in great shape and we look forward to seeing his performance on Saturday, but I believe Filip is the best heavyweight out there.

“It’s great to be back in Saudi, last time I was here the crowd was great and I expect the same on Saturday night. I’m looking forward to showcasing Filip on such a great event and we are excited to end this years world tour with a big bang!”

Eddie Hearn for Matchroom Boxing says he is excited to see the 27-year-old Croatian in action in Saturday’s intriguing heavyweight clash.

“Filip Hrgović is one of the top young fighters coming through in the division right now. He was an outstanding amateur and he has great skills and a great team. I am delighted to be working with Team Sauerland co-promoting Filip and he’s up against a fighter who believes this is his time to relaunch himself on the world heavyweight scene.”

Hrgovic-Molina features on the undercard of the unified World Heavyweight Championship fight between Andy Ruiz Jr and Anthony Joshua which tops a stacked event at the Diriyah Arena, Saudi Arabia. Also on the card are heavyweight clashes between Alexander Povetkin and Michael Hunter, Dillian Whyte against Mariusz Wach, Mahammadrasul Majidov vs Tom Little and more. All the action will be available to watch on DAZN in the US and other territories, RTL in Croatia and Sky Sports in the UK.