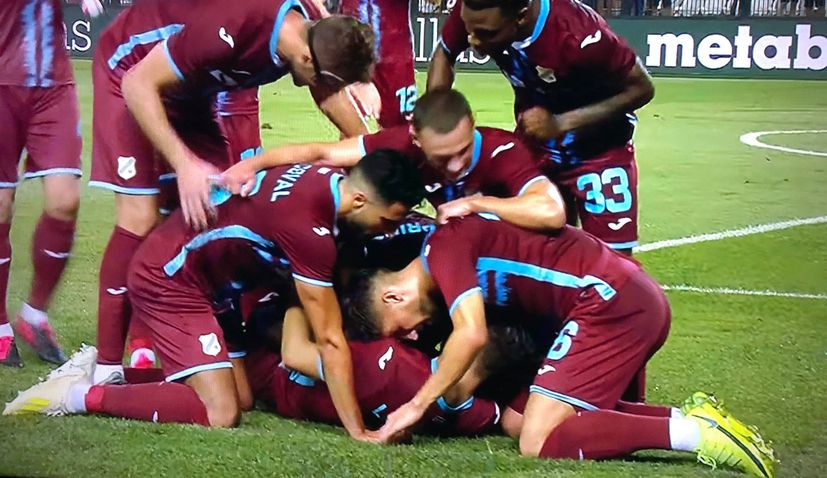 Rijeka celebrate after taking the lead in Greece

Rijeka and PAOK have drawn at the Toumba Stadium in Greece on Thursday night in the UEFA Europa Conference League play-off.

A strike from Ivan Lepinjica in the 33rd minute gave the Croatians a 1-0 lead, but an own goal in the dying seconds of the match meant the first leg of the UEFA Europa Conference League play-off ended 1-1.

The home side started stronger and looked threatening early on. Rijeka almost took the lead with the first attack when Ivan Tomečak’s effort on goal took a deflection and forced a good save from the PAOK keeper.

Rijeka, who were the underdogs going into the match, did take the lead, however, when Lepinjica collected the ball outside the box and as the PAOK failed to shut him down, he would let fly from 20 metres out and beat the PAOK keeper at the near post to make it 1-0.

PAOK came out in the second half on the offensive and it was wave after wave of attacks in the opening 15 minutes of the second spell, but the Rijeka defence and keeper Andrej Prskalo were up to the task.

PAOK would keep the pressure on and would come close a number of times as Rijeka struggled to hold possession and fashion any real attacks of their own. With seconds remaining, PAOK would find an equaliser when a scramble from a corner saw the ball deflect into the net off a Rijeka defender.

The second leg will be played next Thursday in Rijeka.