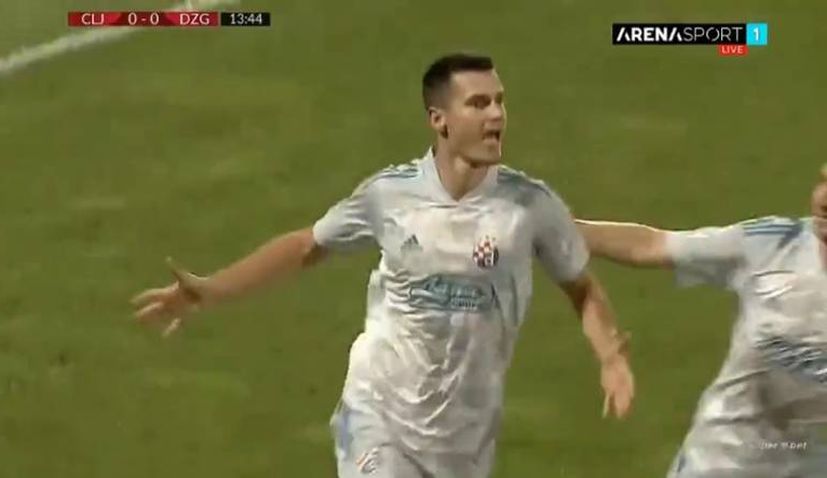 26 August 2020 – Croatian champions Dinamo Zagreb have advanced through to the third round of UEFA Champions League qualifying after a victory tonight in Romania.

Dinamo Zagreb, premiering a new away kit made of recycled plastic, beat CRF Cluj on penalties after playing much of the second half with 10 men.

The Croatians took the early lead with their first real chance of the match in the 14th minute. Luka Ivanušec received a great ball out wide and after beating his defender his rebounded shot fell to Amir Gojak who was the first to react and slot the ball home.

Dinamo was the more dangerous side in the first half and could have easily doubled their lead when Mislav Oršić hit the crossbar.

CRF Cluj had a chance to draw level when they were awarded a penalty in the 52nd minute when Theophile was sent off after fouling in the box. Dinamo keeper Dominik Livaković managed to save the resulting penalty but the home side managed to equalise 10 minutes later when Pereira scored from 20 metres out.

Dinamo got back in front 2-1 with 12 minutes remaining when Bruno Petković found Ademi with a peach of a ball in front of goal. His shot was saved but substitute Lirim Kastrati was on hand to finish off.

The home side would level for the second time in the match in added time through Debeljuh in the 92nd minute.

There would be no goals in extra time and Dinamo would settle the match on penalties 6-5.

The draw for the third qualifying round will be made on 31 August with the matches played on 15-16 September. Dinamo Zagreb will be seeded for the draw.

Croatia’s second club in Champions League qualifying, NK Lokomotiva, were knocked out earlier in the evening at home by Rapid Vienna. A 32nd minute to goal was enough to give the visitors victory.

NK Lokomotiva now joins the third qualifying round of the Europa League.