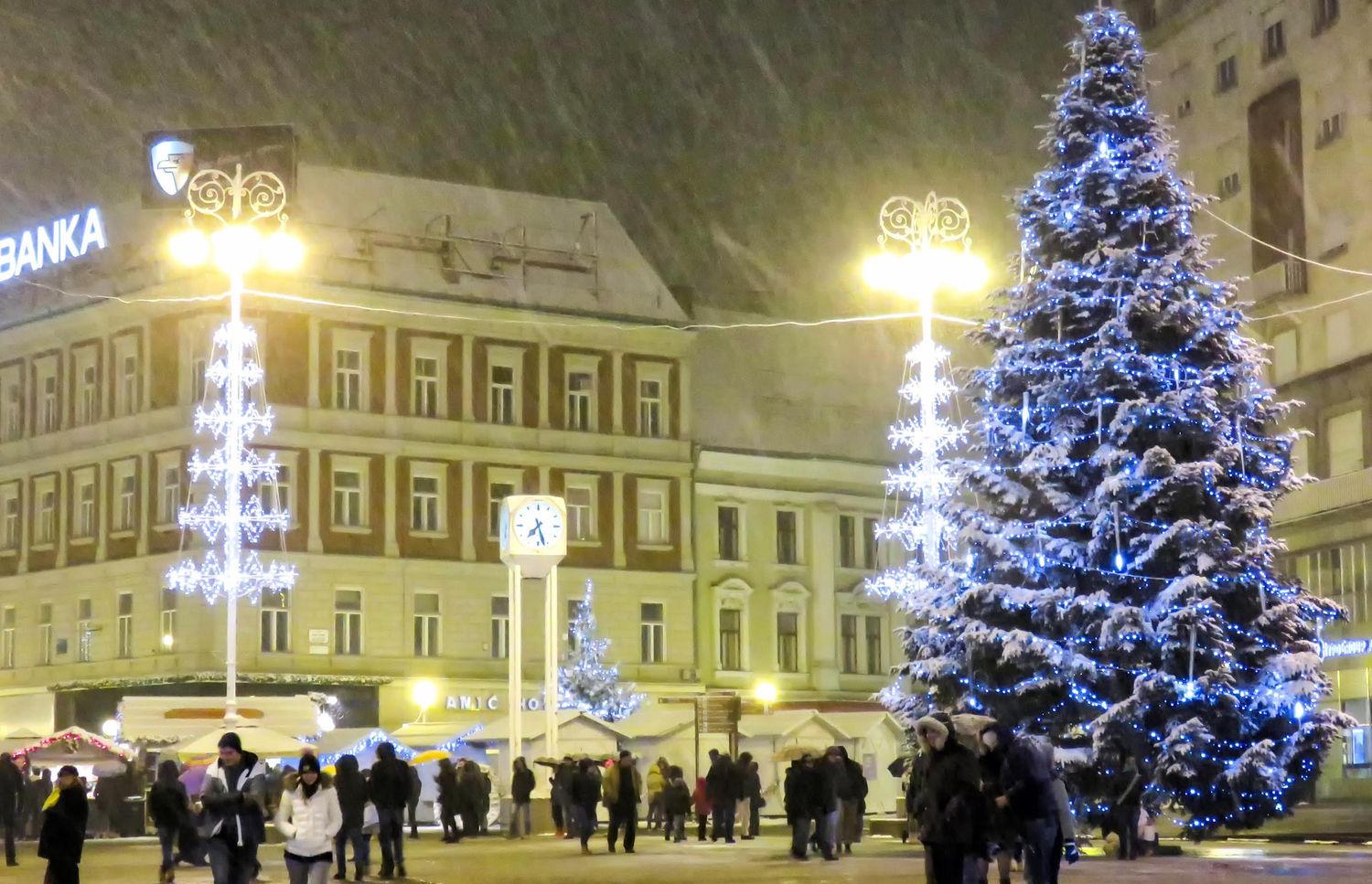 The tradition of Christmas customs in Croatia is long, rich and diverse. Each part of Croatia has specifics and thus contributes to the richness of our cultural and spiritual heritage and traditions. That is why Christmas is considered the most beautiful time of the year. We celebrate the birth of Jesus in peace, and Christmas customs are diverse, both in Croatia and around the world.

Christmas Eve is actually a stump. It would be circled around the house, carried by the oldest member of the family, and placed on the fireplace in the house and blessed with baptized water. Stump was often perceived as a living being, sprinkled with wheat, watered with wine, and given food.

The burning Christmas tree would smolder all the way to the Epiphany, and the ashes would then be sprinkled on fields, vineyards and orchards. It was believed that it would bring a fruitful year, and that house where stump goes out will be in trouble.

There is also a custom to bring three stumps into the house on Christmas Eve, which symbolize the Holy Trinity. Fruit or food was placed on them, and the fire symbolized peace and prosperity. Along with the stump, straw was often brought in, which was a sign of Jesus’ birth on a straw. In Hrvatsko Zagorje, the host or owner of the house used to bring straw into the home and bless the family and the whole household. 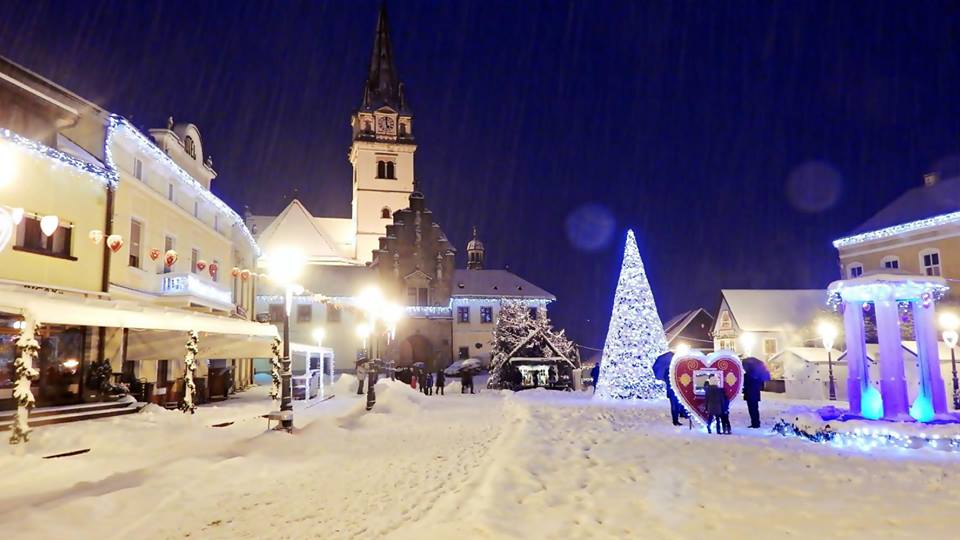 Christmas Eve was always watched and awaited the birth of Jesus. Without electricity, it was necessary to light the rooms with candles. Special candles were made, the so-called candlesticks, and three candles were often connected with the Croatian tricolor. As such, they have become symbols of new life and hope.

In Slavonia, it was customary for women to get up early on Christmas Eve and clean the house on time and prepare non-greasy food while male children visited houses in the neighborhood to wish a fruitful new year. The fastest ones would get sausages and sweets as a gift. Also, it was customary to give a male child a gift on Christmas Eve, and before dinner began, the host brought in a krizban (pine), straw and horse harness, which would be placed under the table. 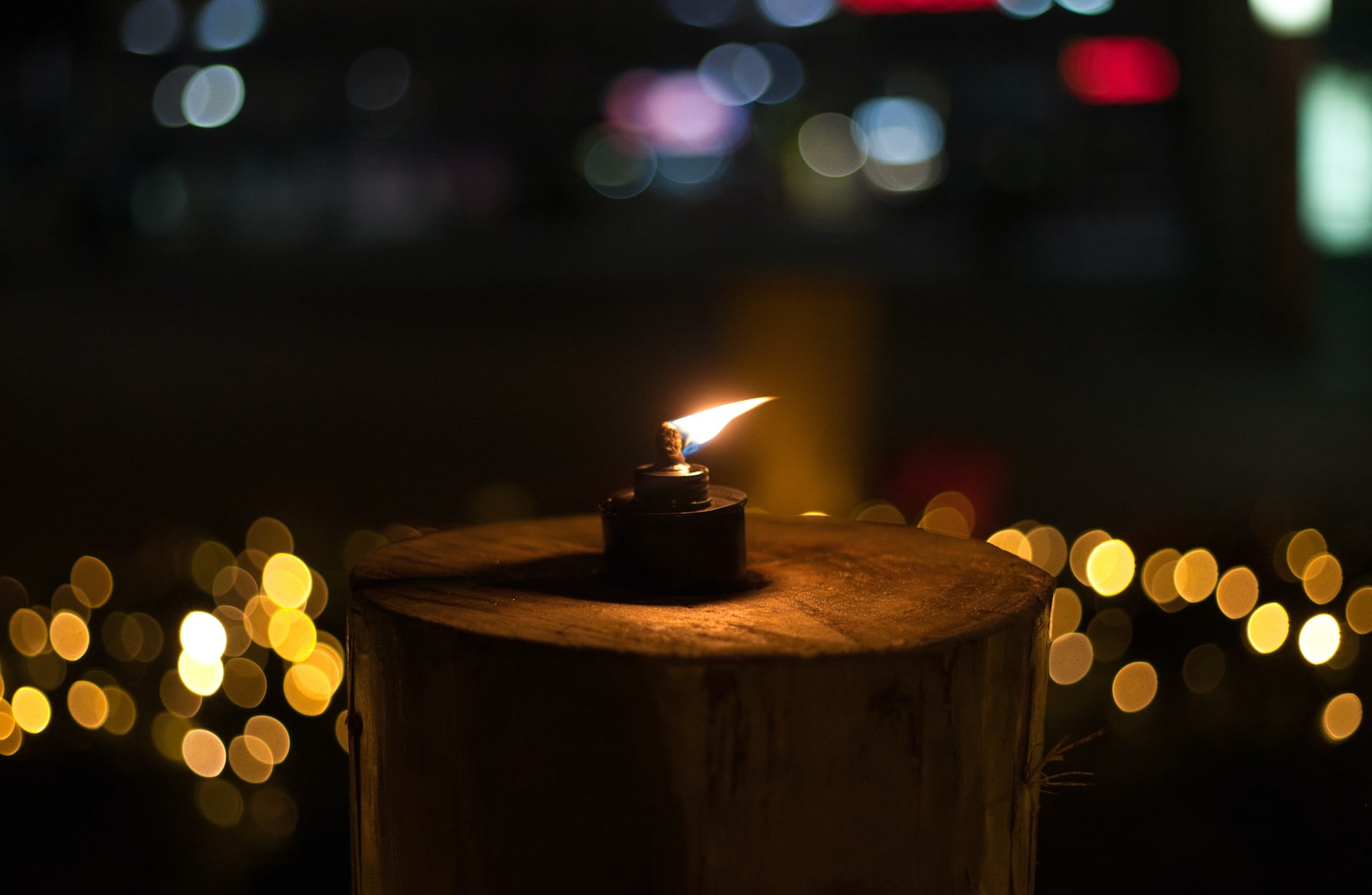 At the end of Christmas Day and midnight, young girls wished the most because the boys would give “Christmas apples” to the girl they like best.

The word “Christmas Eve” itself is associated with the words “wake up” (old church Slavonic word “bad”) and “razbadriti se” which means to wake up and be awake. Croatian linguist Dr. Radoslav Katičić believes that with Christmas Day, the renewal of life begins by the beginning of spring.

According to him, the word Christmas Eve comes from the Sanskrit name for a snake that lies under the root at the bottom of the tree of life. The tree of life is a common and important symbol that appears in many European pre-Christian myths. It is possible that the custom of decorating the Christmas tree is also connected with the Tree of Life. The sacred trees of the ancient Croats were oak and linden.

On Christmas morning, the first visitor comes to the house, a congratulator – the so-called ˝polaznik˝ or ˝položar˝. It was believed that it must be a young, cheerful and strong person because it brings happiness. Whoever comes to your house first – that will be your year. Often families arranged a “random” visitor in advance so as not to cause an accident.

One of the few, and perhaps the only old Croatian Christmas custom that is cherished today is the sowing of wheat. Wheat is sown on the feast of St. Lucia and grows until Christmas.

According to tradition, wheat is decorated with the colors of the Croatian tricolor on Christmas, so that a red-white-blue ribbon is tied around it and a candle is placed in the middle. In order for the wheat to sprout, such would be the crop in the field next year. Wheat is considered a symbol of fertility, renewal and new life. After Christmas it is given to the birds because nothing sacred should be thrown away. 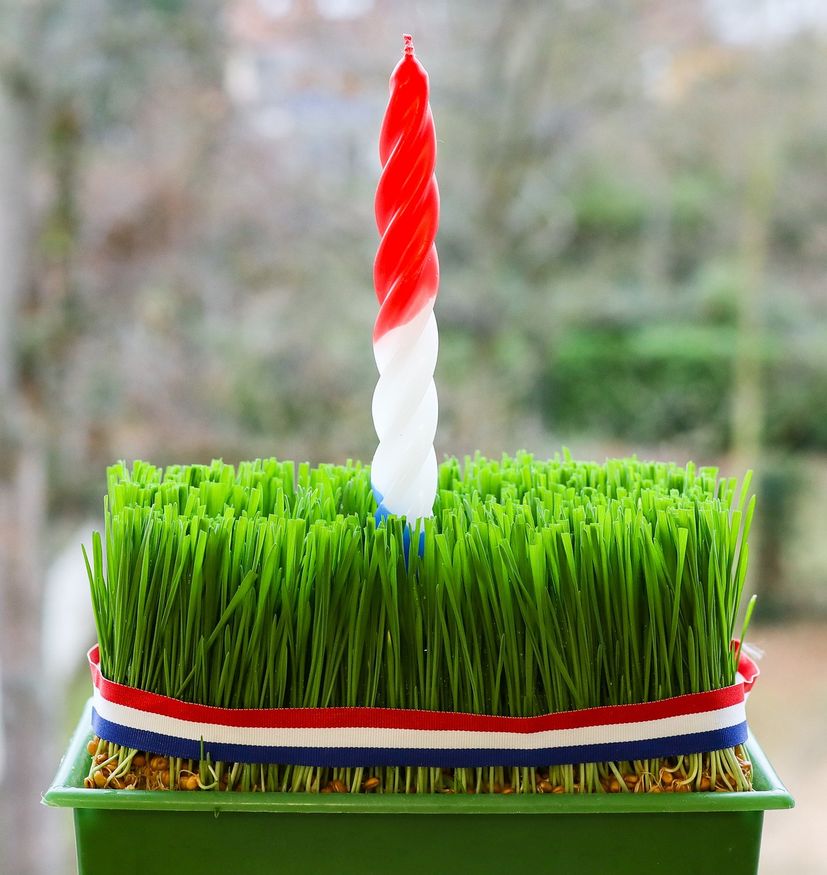 It was customary for the host to bring straw into the house on which the children played. The table was decorated with the most beautiful fruits, money and wheat to make everything abundant in the new year. Also, for Christmas we stayed with the family at home and did not go to visit. As a sign of Christmas, straw lasted much longer than stumps. The moment the straw was brought into the house, which was done by the head of the house, marked the official beginning of the Christmas celebration.

Already at the end of November, Dalmatians were choosing a lamb to be honored during the holidays. They decorated their trees with walnuts, apples, gingerbread and candles. The host would light a Christmas candle, and after the family lunch he would extinguish it with a crust of bread soaked in wine.

Also, they would put a coin in the Christmas bread and it would be broken into pieces and distributed to the household. To the one who would get a piece with a coin, they predicted happiness, health and wealth in the next year.

There is another interesting Christmas custom in Dalmatia. On the feast of St. Lucy, the girls would write the names of the guys they wanted on 11 pieces of paper, and leave one blank. Every day until Christmas, they would burn one piece of paper, and the last one that remained would bear the name of the future husband. If the girl was left with a blank piece of paper, it would mean that she would not marry.

On the feast of Christmas from the 5th century, three Masses are celebrated: Midnight Mass, Dawn or Pastoral Mass and Poldanica (Noon Mass). Christmas is followed by the feasts of St. Stephen, St. John, the Innocent Children or the Newlyweds and the Old Year. Christmas, as a Christian holiday, is celebrated in each nation in its own, special way as part of the ethnographic heritage.

In Crni Dabar on Velebit, on Christmas Eve, residents of that and neighboring villages gathered, who were cut off from the rest of the world for six months due to deep snow. Together they told stories about their ancestors, ate cod and bean salad, drank wine from the island of Pag and shot from rifles and holsters. After 1976, no one lives in the village anymore. They moved permanently to other parts of Croatia.

Christmas cakes are usually of different shapes, decorations and names. In the vicinity of Sinj, in southwestern Bosnia and eastern Herzegovina, bread was made, which was given to sheep and donkeys with a little wine from Bukara. In Slavonia and Srijem, buns for domestic animals were baked. Buns were made to be eaten, and later honey brandy was drunk.

On Christmas Eve, walnuts, hazelnuts, carob, almonds, figs and apples are traditionally on the table, depending on which area thrives. Fish, beans and honey dishes were usually eaten. Favorite were honey with garlic, fish in various ways, broth with polenta, and from cakes fritule, fanjci, gibanice and badnjača (a type of bread). 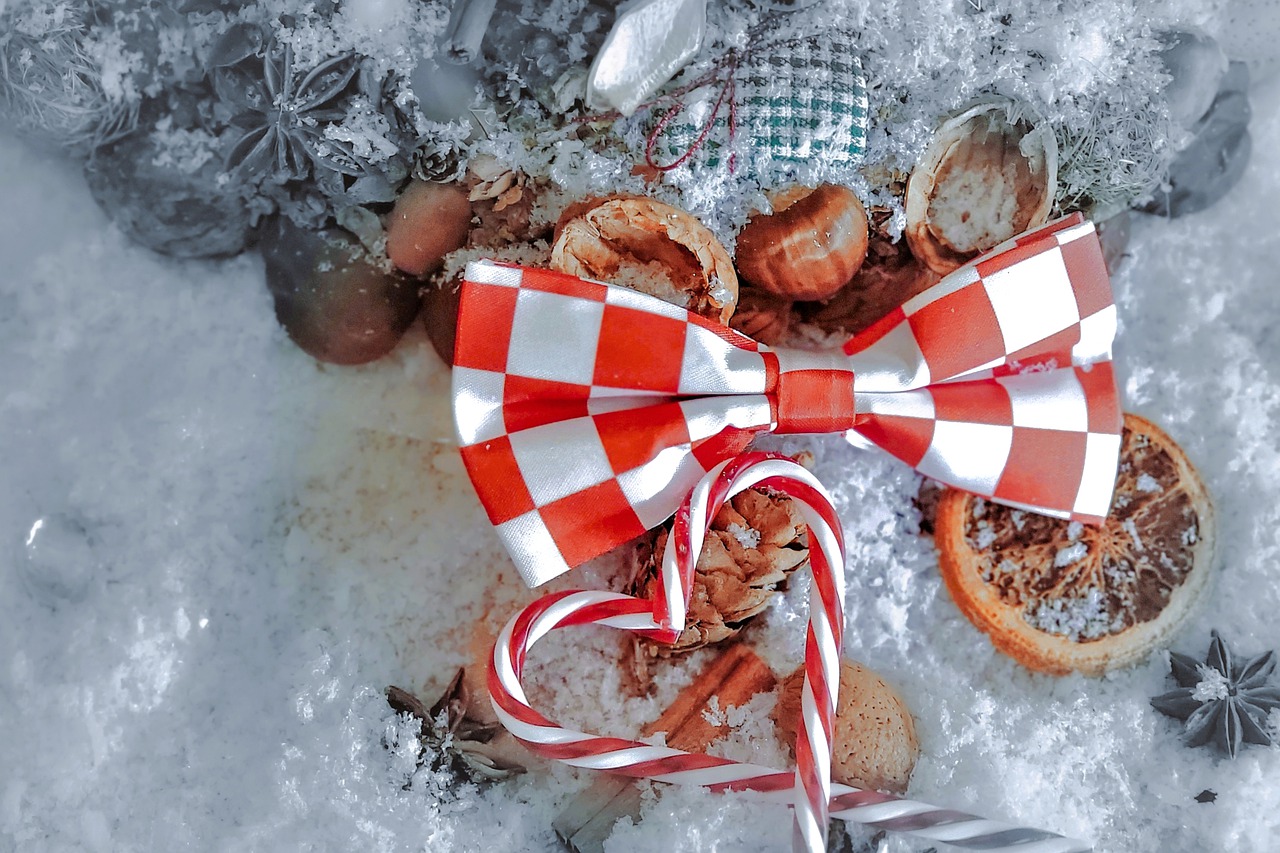 The dishes were lean, without meat and fat. Before Christmas Eve, a candle was lit and a prayer was said. Somewhere on the table was a bowl of various cereals, into which a Christmas candle, Christmas apples and blessed water were inserted, and on the table were placed tools and implements: ploughshare, ruler, yoke, horse ham, whip, bag, chains, and villas.

In recent times, the Advent wreath is becoming more and more present, woven from evergreen twigs. There is no beginning or end that symbolizes eternity. Four candles are inserted into the wreath to mark the four divisions in human history: creation, incarnation, redemption, and end. On the first Sunday of Advent, the first candle is lit and so on until Christmas, all four.

The Christmas tree was not decorated in Croatia until 1850, although it has been a custom in Germany since the 16th century. There were also decorations made of paper. In some parts of Croatia, the whole house was decorated, and in some only the main beam in the house or the fireplace. Also, cribs were made of wood. Gilded walnuts and hazelnuts were jewelry used to decorate the tree, and candles, symbols of hope and deity, were often placed. Then pieces of cotton wool, wax or paper were placed to symbolize the snow on the tree.

After dinner on Christmas Eve, those gathered would still sit and talk, sing or pray, and then gather in the streets to go to Midnight Mass, one of the most solemn Masses of the year. At midnight, Christmas songs are sung for the first time, which are an integral part of worship. After midnight, the gathered faithful congratulate each other on ‘Merry Christmas’ and return to their homes. Then they often eat a lot of meat dishes, Christmas cakes and drinks. 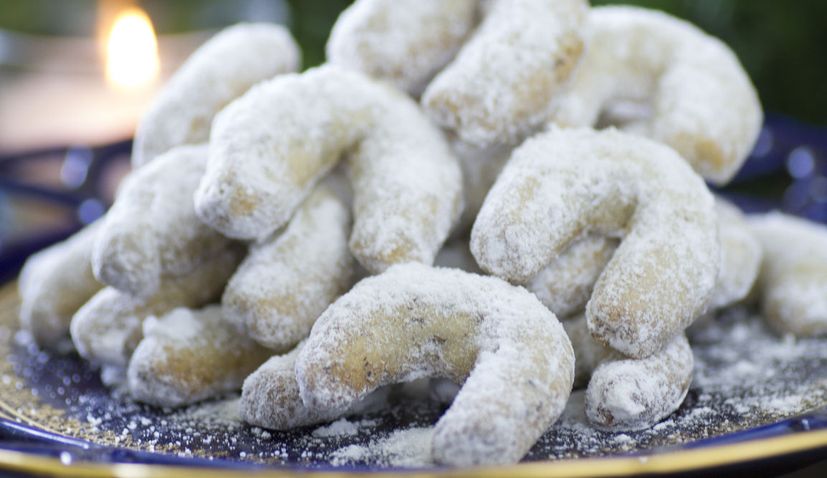 After Christmas, many Croatian homes eat pečenica with horseradish, cold cuts, home-made sausages, kulen, bacon, prosciutto with cheese and olives for breakfast. The women had prepared the Christmas menu the day before, and lunch was festive and rich, and the whole family gathered at the table. If it rained on Christmas, it was believed that everything that was dug with a hoe would bear fruit.

At Christmas, people often went to three Masses: at midnight, at the early morning dawn mass and at noon (day or big mass). The girls came to Mass in various ceremonial dresses and folk costumes.

On the first day of Christmas he usually stays at home, and on the second day of Christmas, on St. Stjepan, we are visiting relatives and neighbors. Caroling or congratulations were spiced up by singing traditional Christmas songs, and congratulators would often be given as gifts.

The boys gave the girls a decorated Christmas present as a traditional Christmas present. It was customary to throw an apple into a well before Christmas and then take it out for the New Year. In case the apple remained red and healthy, it meant that the family would be in good health. The second day after Christmas begins the blessing of homes and families.