Home » Entertainment » The girl in the painting 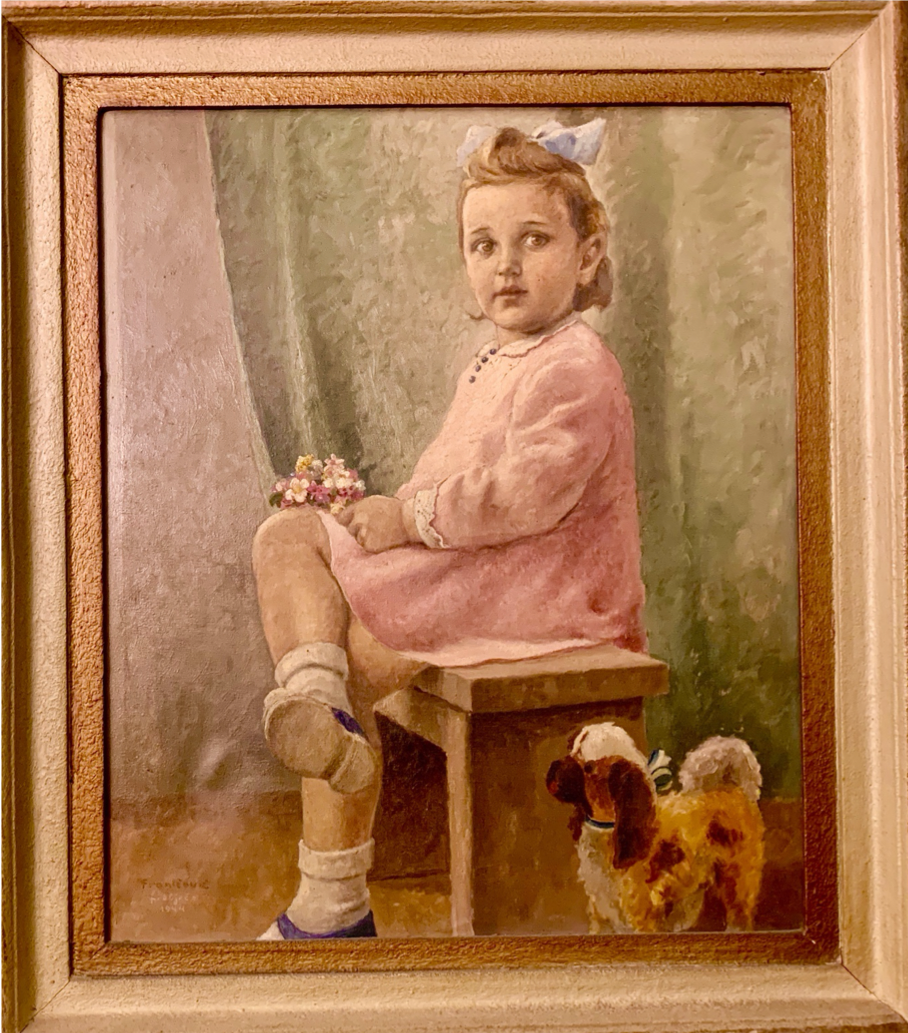 She sits with her legs crossed, wearing a pink dress. Her hair is tied in a blue bow and she holds a modest bouquet of flowers in her chubby little hand. Her socks are cuffed, her shoes blue and white and her almond-shaped eyes are intriguing—playful, inquisitive, intelligent and direct. A little dog takes your gaze away from her, but only momentarily, because it is the little girl who clearly insists on attention. She doesn’t yet know whom she will become, but her eyes tell you she will be a force of independence, acumen and success.

I had always adored her. She was fun. She loved to listen to music and sing. She had style. She’d talk with me, like I mattered. She’d ask me questions and her piercing dark eyes acknowledged that she heard, pondered and analyzed every word. She saw me as a person, not as a little girl, even when I was one. And I related to her, maybe because through that painting on the wall, I could see the little girl she once was.

The story of the painting is nearly as interesting as she is. As any child, she played outside, yet for days there was a man who watched her—the kind of watching that would put any mother on guard, as it did hers. It turned out this man was a painter and he saw something special, artistic in this little girl. His canvass called to him to paint her. He did, and one day brought the completed painting to her family as a gift. Seventy or so years later, it hangs as the quiet, unintentional focal point in her living room.

Her parents passed many years ago and she lives alone, in the same home in which she grew up, the home her father built. A view of the mountains on one side; the Adriatic Sea on the other, and a Catholic Church immediately across the street. She lives alone, but is surrounded by memories of long ago and a life where the clock seems to drag a bit, slow down, take it easy, like an old Dalmatian song. The path she chose in life was one that resulted in an abundance of friends and people who continue to visit her, bring her groceries and just check on her to make sure she’s ok. That alone, speaks of a life well lived. She has always had a mannerism and charm with young people that made them adore her. She became a professor of languages and was beloved by her students. Today, at nearly 80 years of age, she still tutors future generations—many of whom are children, if not grandchildren of children she taught. She loves being surrounded by young people. It keeps her young at heart and sharp in mind.

If my words could paint an image as Gabriel Garcia Marquez, I might come close to doing her justice. But I fear to try, for her personality and presence deserve more than my lexicon could provide. She is a lady. She is cunning. She is quick-witted and amusing, in a very intellectual way. You may be one of the many people who find themselves laughing at jokes that make you the central character, and the punch line. They are so exceptional and clever, you just have to laugh. And sometimes, it might take you a few minutes, until you realize the subtle precision and intellect behind the words she just uttered.

Last summer I was fortunate enough to reacquaint myself with her in a new way. I have lived overseas for nearly all of my life and it had been 18 years since I saw her last in my home country of Croatia. I was no longer a little girl or a teenager, or a young 20-something, or a graduate student still discovering life. I was a mother and a wife. Perhaps the greatest compliment I could have ever received came from her. She told me I had grown into myself. She told me I was a great mother—it reflected in the behavior of my three girls. Those words, coming from her, were the Nobel Prize of success for me, especially given that she had spent most of her life around young people—teaching them, observing them, helping them grow.

We sat around the kitchen table that summer—the same table I sat at with my grandparents and her, many years ago. The church bells rang on the hour, every hour and she would stop whatever she was doing and make the sign of the cross. I studied her watching and studying my girls, speaking to them the way she spoke to me when I was a little girl—with interest, sincerity, inquisitiveness and perhaps a slight bit of judgment—but that was expected. Her theory never even contemplated that children should be seen and not heard; in fact, her mannerisms always welcomed curiosity, questions and conversation, as they still do—as long as they are well-mannered.

Her legs are crossed, her cigarette leisurely hangs between her fingers, smoke lingering around her gray hair, as if to accent its charm. She is wearing a carefully matched marine, blue and white coordinated outfit, her head is slightly cocked, a Mona Lisa smile, slightly overcast with smile, adorns her face and her piercing eyes see more than she will ever allow you to know… She is a refined woman of wit and charm, accomplishment and wisdom and I am proud to have been reintroduced to her, at this stage in my life.

I watch the exchanges between her and my daughters and hope they will remember her. I hope they will feel as respected, recognized and valued as I did in her presence. And I hope when they look upon that painting of the little girl in the pink dress they will realize that just like she, they can accomplish anything.