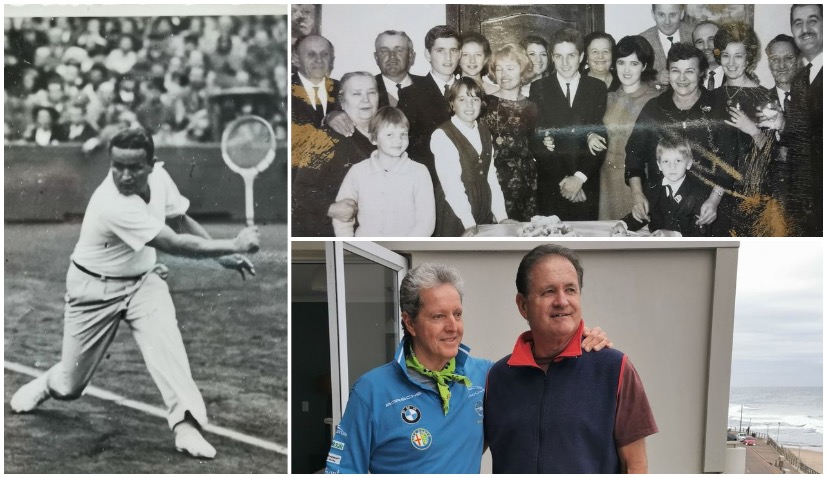 Goran Ivanišević, Marin Čilić, Ivan Ljubičić, Mate Pavić, Nikola Mektić, Ivan Dodig, Iva Majoli…are just some of the Croatian tennis players who became household names, but it is not just in recent time that Croatians have been making a mark on world tennis.

Another Croatian player who reached the top of the sport was Franjo Punčec. Born in the northern Croatian city of Čakovec in 1913, Franjo reached a career-high ranking of world no.3 and was ranked no.1 in Europe. He was also the first Croatian ever to be placed in the world rankings list.

Franjo won a number of titles around the world and twice reached the semi-finals at Wimbledon and the French Open.

In the late 1940s, Franjo and his wife Zora moved to South Africa where they had three children – Frank, Victor (Vic), and Sylvia – and we caught up with Vic to learn more about the Croatian tennis legend.

“My brother Frank and I are the only people with the surname Puncec (Punčec) in South Africa today,” Vic starts off telling us, before continuing.

“My father left what was then Yugoslavia with my mother Zora and settled in Johannesburg, South Africa. They ran away from Yugoslavia in the 1940s because of the communist problems, leaving their houses, possessions and wealth to get to Egypt where they lived for 3 years waiting to be allowed to settle in South Africa,” he explains.

Vic and his siblings were all born in South Africa but they still had a ‘Croatian’ upbringing.

“I remember as a young boy sitting on the stairs of our big house with my brother and sister, watching my parents entertain so many Croatians every Sunday where my gran would cook up a storm. They would only play folk music which my father loved and just they loved to party and be happy. I have such wonderful memories of my parents but they hardly spoke about Yugoslavia and his tennis wins as my he was worried about communism so we never spoke politics at home,” he recalls.

Vic has some great memories of his father, who passed away in 1985 at the age of 71.

“When I was 16, my father and I went around the world by cruise liner. My mother had stayed back with Frank and Sylvia. I remember when we got to Sydney my father’s best friend came to meet us and took us to dinner. When we walked in the lights came on and there were thousands of Croatians who all stood up and started clapping. It was a wonderful moment.”

Whilst Franjo did not want to talk too much about his illustrious tennis career, it is well documented so the family quickly learned the heights he achieved.

Some of Franjo’s trophies on display (Photo credit: Silverije/CC BY-SA 4.0)

Apart from his success at Wimbledon and the French Open, Franjo reached the 4th round of the US Open and represented Yugoslavia in the Davis Cup for a decade. His achievements are not forgotten in his home town of Čakovec where the local tennis club is named after him and a bust made by sculptor Boris Leiner sits.

Franjo was In his 30s when he moved to South Africa and quickly became successful and popular in Johannesburg as a tennis coach. It was only natural that his sons would follow in his footsteps.

“When Frank and I finished school we also started coaching and we had the biggest tennis school in Johannesburg. Then at 26, Frank and I started playing the European Circuit. I got a 10 year contract to coach for a club in Germany and I played no.1 for them and played  tournaments around Europe. Frank continued to just play tournaments and reached 126th on the ATP rankings,” Vic says, who also had stints coaching in Austria and Spain.

Despite being in Europe coaching tennis, Vic says he was unable to visit his parent’s birthplace.

“In 1977 when I started in Germany and I went to the Yugoslav Consulate at the time to get a visa to go and visit family and places but was refused as I had an South African passport. The top man at the consulate said to me he used to watch my father play Davis Cup in Zagreb but he couldn’t get a visa for me. So it was not until more than 20 year later that we as South Africans were allowed to visit Croatia,” Vic explained.

Vic says there were thousands of Croatians in South Africa when he was growing up, living mainly in Johannesburg, Pretoria and also Cape Town and he estimates today that there are still about 7,000 left in the country.

Frank with the bust of his father (Photo credit: Silverije/CC BY-SA 4.0)

“My mom, sister and other women would dress up in the National Costume and play same music. Life in South Africa was very good and we all had beautiful big houses with swimming pools. Today most Croatians go to the Croatian church on Sundays for mass and stay for lunch,” Vic says.

Today, Vic is still involved in coaching tennis and he also operates an Airbnb business, whilst his brother Frank (70) still plays tennis and has a big hobby restoring old classic BMW from 1970. Sylvia (66) is married to an American and lives in Oklahoma City with her kids and grandchildren.

The last time Vic visited Croatia was just before the pandemic hit, but he says he hopes to go again this year in August.

“Croatia is such a beautiful country. We love Croatia and can’t wait to go back. We also love the Franjo Puncec Tennis Klub in Cakovec,” he concludes.