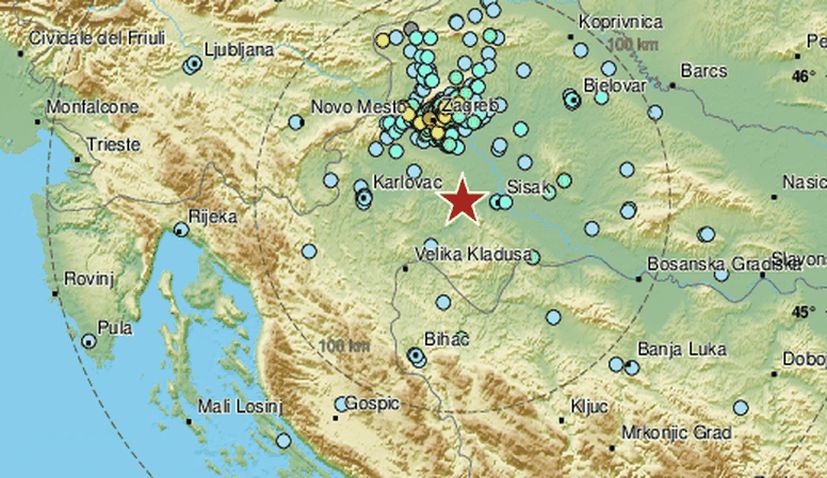 ZAGREB, Dec 28 (Hina) – A magnitude 5.1 earthquake hit Zagreb at 6.28 a.m. on Monday, according to the European-Mediterranean Seismological Centre.

The quake occurred 2 km below the ground, 50 km southeast of Zagreb and 12 kn northwest of Sisak.

The epicentre was 14 km northeast of Glina, closer to Petrinja, said the head of Croatia’s Seismographic Service, Ines Ivancic. The magnitude was 5 on the Richter scale, she told Croatian Radio, adding that the exact magnitude was still being established and that aftershocks were possible.

The quake was the strongest since the 5.5 magnitude earthquake which hit back on 22 March.

“What a wake up, everything was shaking for what felt like 5 seconds. It was like back in March, what a year,” one reader said.

“I felt that strong, everything was shaking, the neighbour’s tiles were falling off the house,” a resident in Petrinja near the epicentre told the European-Mediterranean Seismological Centre.

The tremor was strongly felt in the entire Sisak area, making people run into the streets for fear of aftershocks.

For now it is unknown what damage it has caused but there have been confirmed reports of minor damage to some buildings, and many people are already complaining about cracked walls and chimneys in the Sisak area.

According to reports, the quake was also felt in Zaprešić and even in Rijeka.