Last year in October the first organised gathering of Croatians from the Homeland and the Diaspora met for a business conference in Zagreb, later this year a second meeting will be held…

Over 50 participants from Argentina, Australia, Austria, Bolivia, Bosnia and Herzegovina, Chile, Ecuador, Finland, France, Canada, Hungary, Macedonia, Germany, Paraguay, Peru, Poland, USA, Switzerland and Venezuela took part in MEETING G2.1 the first ever conference organised by Croatian returnees for Croatian returnees. The next conference – MEETING G2.2 – will be held from 10 – 12 October 2016 again at the FORUM Zagreb Congress Center, and yesterday a Pre-Meeting: Croatia United in Business was held in Zagreb.

The pre-meeting including interesting panel discussions under the topic ‘Strengthening business ties between the homeland and the Croatians abroad”.

Opening the discussion was Don Markušić, Vice President of Transparency International Croatia and President of the Asia-Pacific Chamber of Commerce.

“We do not have to wait for everything to be fixed in order to invest in Croatia. There are a lot of young people in Croatia who are thriving in these difficult conditions. There is great interest in investing in Croatia, which the diaspora play an important role in. Croatian entrepreneurs should not be afraid, they must take advantage of our people abroad, like which (bakery chain) Mlinar done recently, opening a franchise in Australia,” Markušić said. 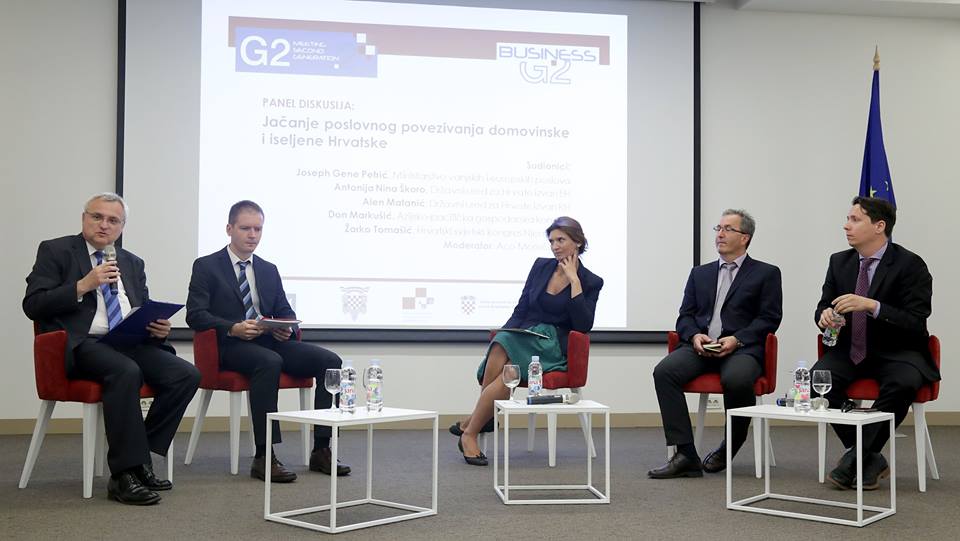 Next to speak was Joseph Gene Petrić, Deputy Minister of Foreign and European Affairs, who spoke about the political consensus in working towards helping strengthen business ties.

“It’s moving towards the creation of new attitudes and there is a need to educate people. It is much easier for me, a market-oriented man who is born in the United States, than people who live here all the time,” he said.

Taking part in the panel discussion were also representatives from the State Office for Croatians Outside of Croatia and Antonija Nina Škoro touched on working on preserving the language as a key step in helping development. Žarko Tomašić, head of the economic working committee for the Croatian World Congress in Germany, called for the strengthening of trust between Croats at home and abroad.

“The Diaspora continues to have a strong interest to invest in Croatia. Of course, they are strong and emotional ties to the homeland and we all prefer making money in the land that we love more. However, you have to be smart with money, it can no longer get into the wrong hands. The past has taught us that many people got lost in the forest of Croatian administration and returned home with a negative experience. That is why this stage G2 offers a solution and restores this lost confidence,” said an upbeat Tomašić.