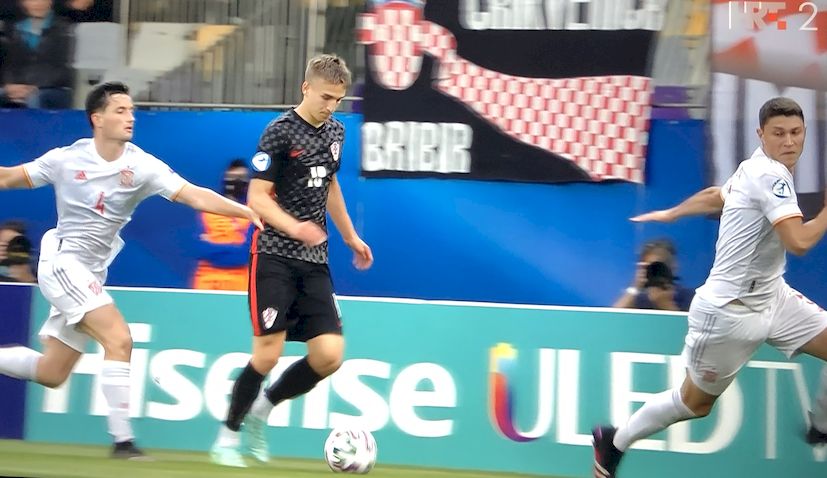 MARIBOR, 31 May 2021 – Croatia Under-21s have been knocked out of the European Under-21 Championship after losing to Spain after extra-time at Stadion Ljudski vrt in Maribor, Slovenia on Monday.

Croatia, who were playing in the quarterfinals for the first time in their history, started off positively against the reigning champions, controlling possession early on and fashioning the first shot on target when Dinamo Zagreb midfielder Lovro Majer had a long-range shot.

Spain started to get more into the game as the half went on and were causing Croatia problems down the flank, particularly on the left, but they lacked precision delivering the final ball in the box and Croatia keeper Adrian Šemper was never tested in the first half.

Luka Ivanušec, Domagoj Bradarić and again Majer had shots blocked and both sides would go into the break locked at 0-0.

The speed and short-passing of the Spanish started to cause Croatia some problems early in the second half and they nearly took the lead in the 62nd minute but were denied by Šemper.

Spain would take the lead four minutes later when substitute Javi Puado steered in a cross from the left past Šemper at the near post.

Coach Igor Bišćan introduced fresh legs in the final 20 minutes as Croatia chased an equaliser, but the Spanish defence were well organised and gave their opponents no real chances on attack until the 93rd minute when Croatia was awarded a penalty after Stipe Biuk was brought down.

Ivanušec stepped up and calmly converted to make it 1-1 and send the match into extra-time.

There was not much attacking action in the first spell of extra-time as both sides looked as if they had started to tire. With ten minutes of extra-time remaining, Spain would get the winning goal when Puado was put through one-on-one and made no mistake after rounding the keeper.

Spain will now face Portugal or Italy in the semi-final on June 3.

Croatia advanced from their group through to the quarterfinals on goal advantage after losing to Portugal 1-0, beating Switzerland 3-2 and a 2-1 defeat to England.