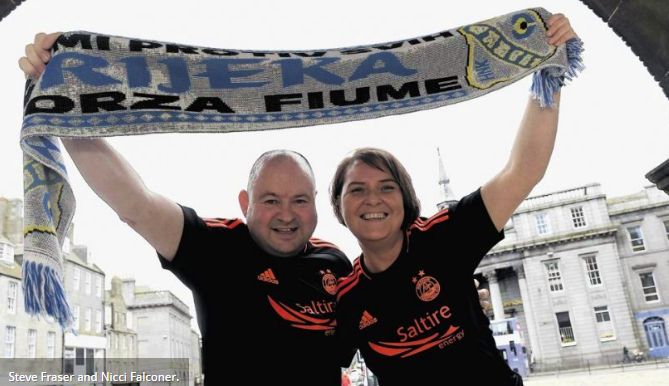 A pair of football fans from Scotland have had a weekend in Croatia they will not forget in a hurry.

Steve Fraser (50) and Nicci Falconer (45) got the red carpet treatment in Rijeka last weekend when they turned up to watch the Croatian league leaders at home to Split.

The loyal Aberdeen fans had struck up a friendship with Rijeka fans Teo Francetic and Christian Brozovic when the two sides met in Europa League qualifiers in July 2015.

Steve and Nicci decided to take up an invitation and on 15 April made the trip to Rijeka to catch up with the pair and watch a match.

Steve and Nicci expected the trip to be little more than just a few beers between friends while taking in the match. But how wrong they were.

“It ended up being one of the best and most memorable weekends of our lives. We could never repay the kindness and hospitality we were shown by everyone over in Rijeka,” Steve told The Evening Express.

Steve and Nicci not only went to the match – which Rijeka won 2-0 – but they ended up getting the full VIP treatment.

Rijeka managing director Vlado Cohar gave the pair a full guided tour of the stadium, whilst the club’s chairman, Damir Mišković, greeted the pair to present them with gifts, including an official Rijeka shirt. 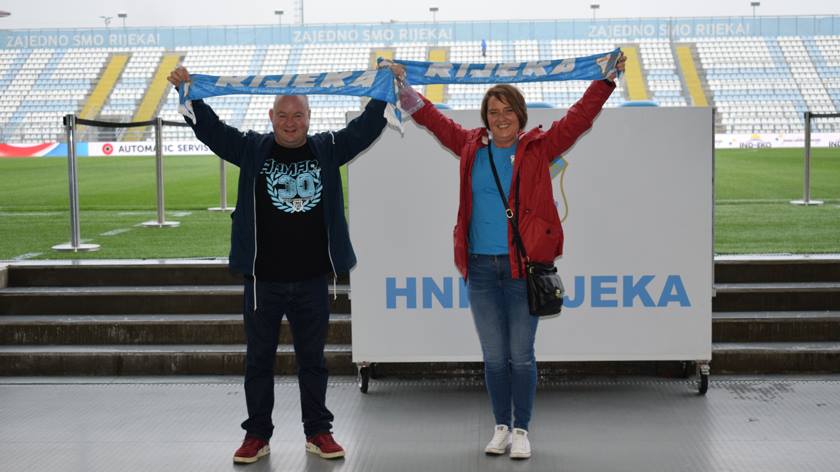 Rijeka manager Matjaz Kek also cut short the standing ovation he was getting from Rijeka fans for winning his 200th game in charge to go across and present Steve and Nicci with official club caps.

To top it all off Damir Mišković bought them 100 beers to enjoy during the match.

“It was amazing being treated as celebrities for a few hours. We’ve never been lucky enough to get one beer off Dons chairman Stewart Milne, never mind 100!,” said Steve.

Steve and Nicci also did interviews for the club’s website, Croatian television, and radio and the local newspaper.

“We hardly had to put our hands in our pockets, which was right up Nicci’s street. It normally costs me a fortune to keep her beer glass full whenever we are away.

Steve says that the best part of all though was watching the match with Rijeka fans, Teo and Christian in particular.

“The atmosphere was brilliant because they are unbeaten this season and on the brink of winning their league title. The weekend really couldn’t have gone any better.”

Check the video of their visit below.