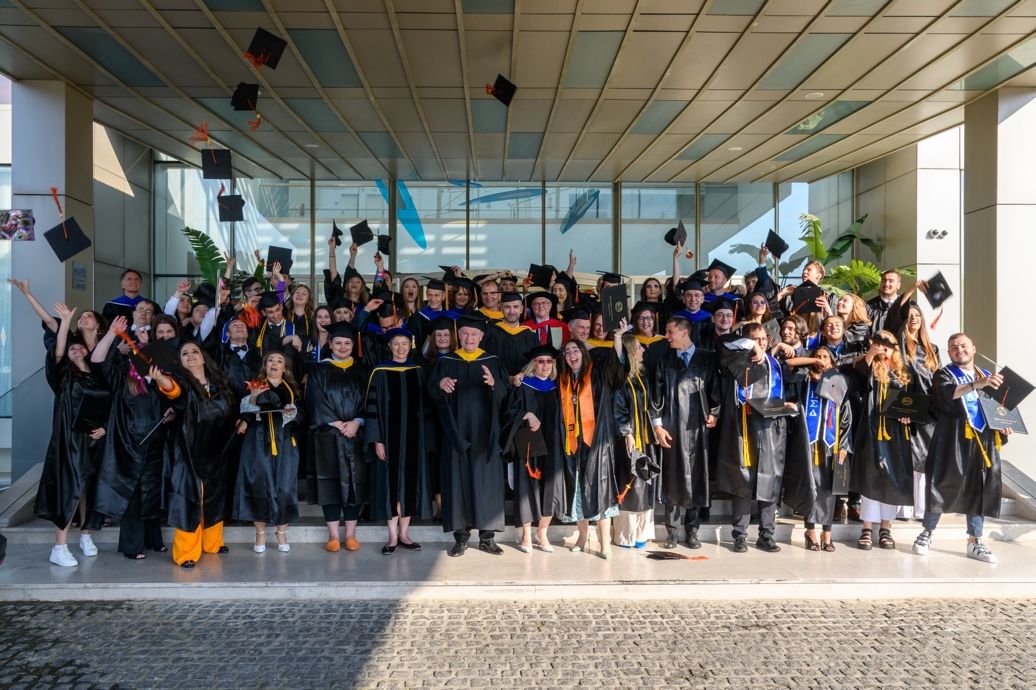 For many Americans, moving to Croatia to pursue their undergraduate degree is something unheard of. Receiving a Croatian and American diploma while studying in the beautiful country of Croatia simply seems too good to be true. That is what I thought back in 2013 while I was searching for the college where I would spend my 4 years pursuing my undergraduate degree. So, imagine my surprise when I heard about RIT Croatia

RIT Croatia opened its doors on September 18th, 1997, in Dubrovnik, being the first global campus of the prominent American university, Rochester Institute of Technology from New York, USA. RIT Croatia is the oldest private higher education institution in Croatia. This means that the opening of the Dubrovnik campus marked the beginning of private higher education in Croatia.

RIT Croatia has recently celebrated its 25th anniversary. This milestone not only has me thinking about the good times I had roaming the halls, but it has all alumni and current students thinking about the memories made on campus and what we appreciate most about our college.

One of the important components of RIT Croatia’s success, in addition to its excellent study programs, is its quality and solid relationships with all the community’s members, including its faculty and staff, current and former students, and various business partners.

Throughout my time as a student and since graduating in 2018, I have met exceptional students and alumni that have helped me pave my path in my personal life and professional career. The constant feeling that someone always has my back is something that not only I have a sense of, but so do other students and alumni as well. This close community is the most valuable characteristic in my opinion.

Being so touched by the strong community and the power that the alumni association has on all RIT Croatia alumni and students, I am currently the Vice President of the alumni association at RIT Croatia. It is an absolute honor to work hard and connect alumni to help each other in their professional endeavors. I believe that working together and helping each other can allow us to achieve our professional goals easier and quicker than by doing things on our own.

25 years of having a diverse student body

I will never forget my first week of being a student on campus at RIT Croatia in Zagreb. Just on my first day, I met so many people from many different places. Having the exposure of different cultures on campus showed me what a diverse community of students I had become a part of. I felt that although I am a Croatian American, there were many students with similar backgrounds to mine. 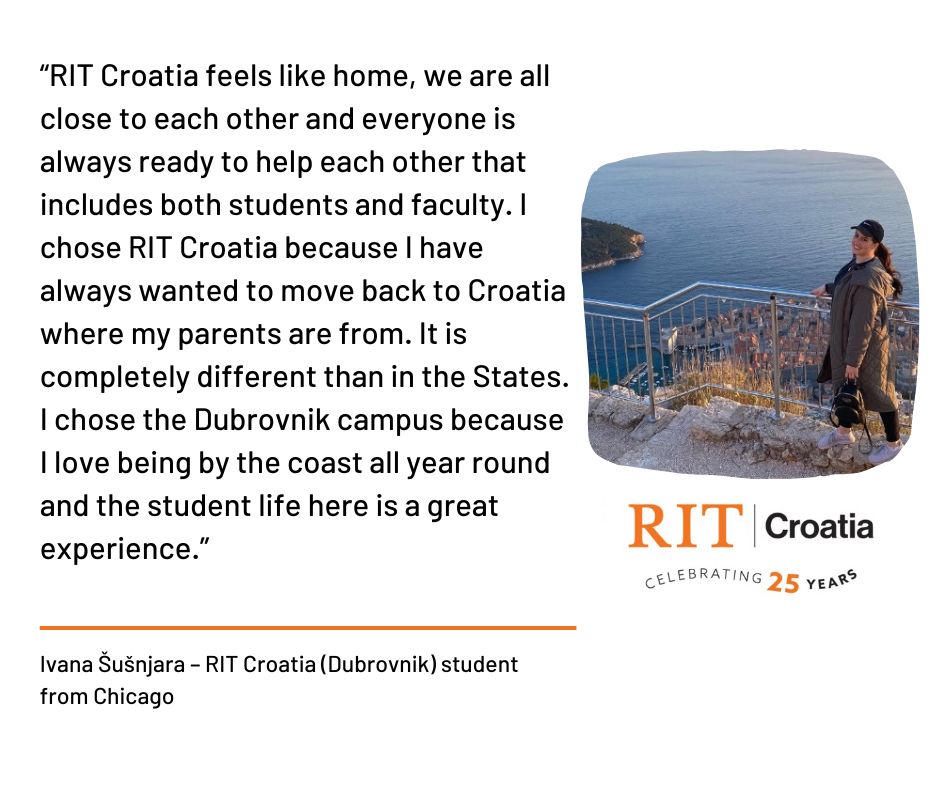 Since the first-day RIT Croatia opened its doors, it has been the home of many diaspora students, like me, looking to study in Croatia and get to know the culture better. Moving across the world to study in Croatia is a challenge, but having such welcoming faculty, staff, students, and alumni, the path to make Croatia your home is made much easier. 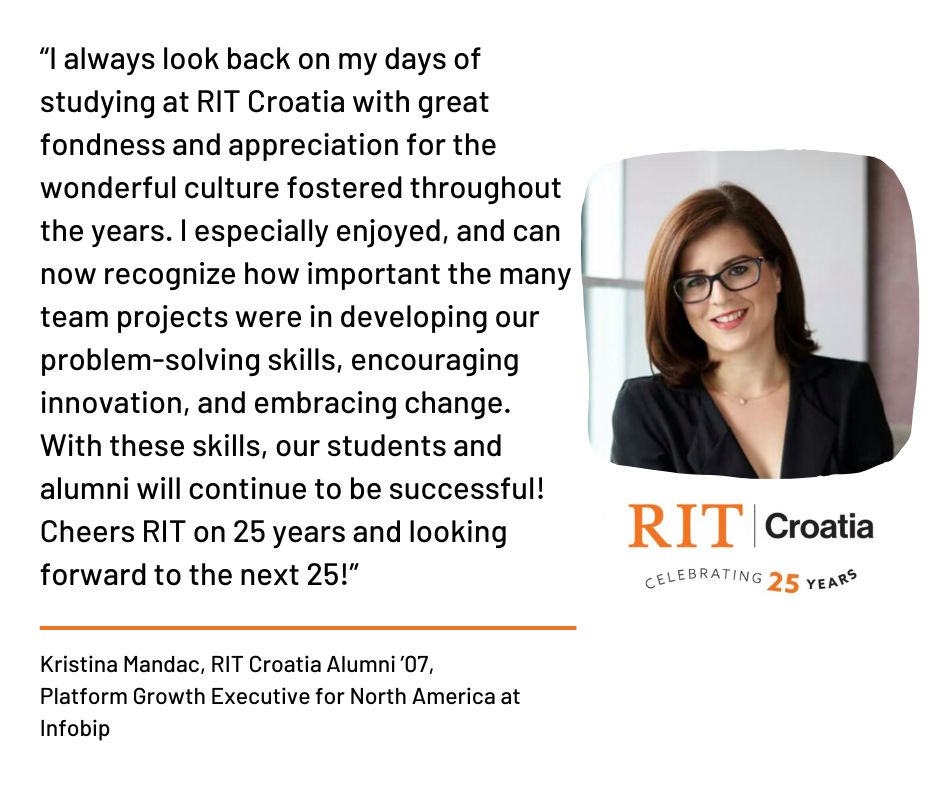 RIT Croatia opened a second campus in the nation’s capital Zagreb in 2011 as a result of the success of the Dubrovnik campus. More than 2,800+ graduates from 40+ different nations have now received degrees from RIT Croatia. The tight-knit student body and strong alumni community is one of the key factors to these successful 25 years. 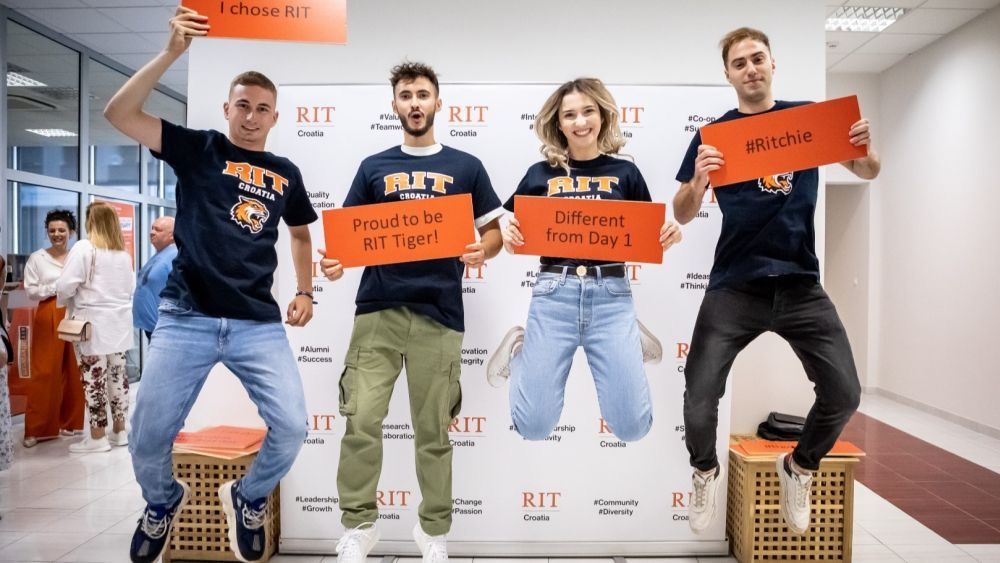