Replica of the camera unveiled on Thursday in Šibenik (Photo credit: Grad Šibenik)

A replica of the first film camera, which 123 years ago shot the oldest film footage from southeast Europe, has gone up in the Croatian city of Šibenik.

‘Alexandre Promio again in Šibenik’ is the name of the installation which was placed on Šibenik’s waterfront on Thursday.

In Croatian cinematography, it is noted that the oldest film record from the territory of the Republic of Croatia, and this part of Europe, is a recording called “Šibenik Port” from 1904 from English cinematographer Frank Mottershow.

This was written in the history books, the Croatian Audiovisual Center and the Croatian Cinematheque until 2005, when a professor from the Academy of Dramatic Arts in Zagreb, prof. Enes Midžić by chance found on the Internet a strange title “Salut dans les vergues de Alexandre Promio, Sibenik, 28th April 29th, 1898.” Professor Midžić then went to Paris and found seven short films in the company of Lumiere.

Promio was a French film photographer and director and a pioneer in film. He came from an Italian family that moved to France and resided Lyon.

The found films are the oldest preserved film records in Croatia and this part of Eastern Europe, Grad Šibenik said. 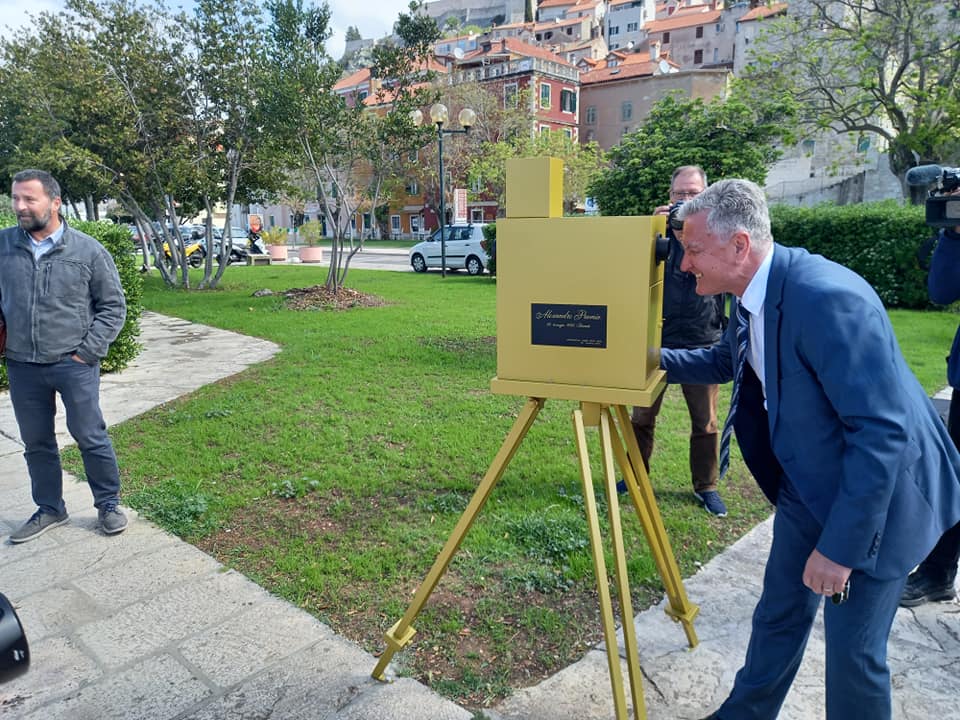 The author of the installation is Zoran Lučić Luca, and the presentation was attended by Šibenik Mayor Željko Burić and his associates and the Director of the Tourist Board of the City of Šibenik Dino Karađole.

“People realised 123 years ago how beautiful this city is, that is, how interesting its surroundings are. If there were no such people in Šibenik, such as Zoran Lučić Luca, we would probably never know some stories from our rich history,”said Mayor Željko Burić. The author Zoran Lučić Luca wanted to mark this event in this way, and mark a place that is important for Croatian history and culture, and especially for Šibenik. The opening of this installation also announces the theme of this year’s project by Zoran Lučić Luca and the Tourist Board of the City of Šibenik – the event “Light is life”, and it is “Film as light”.