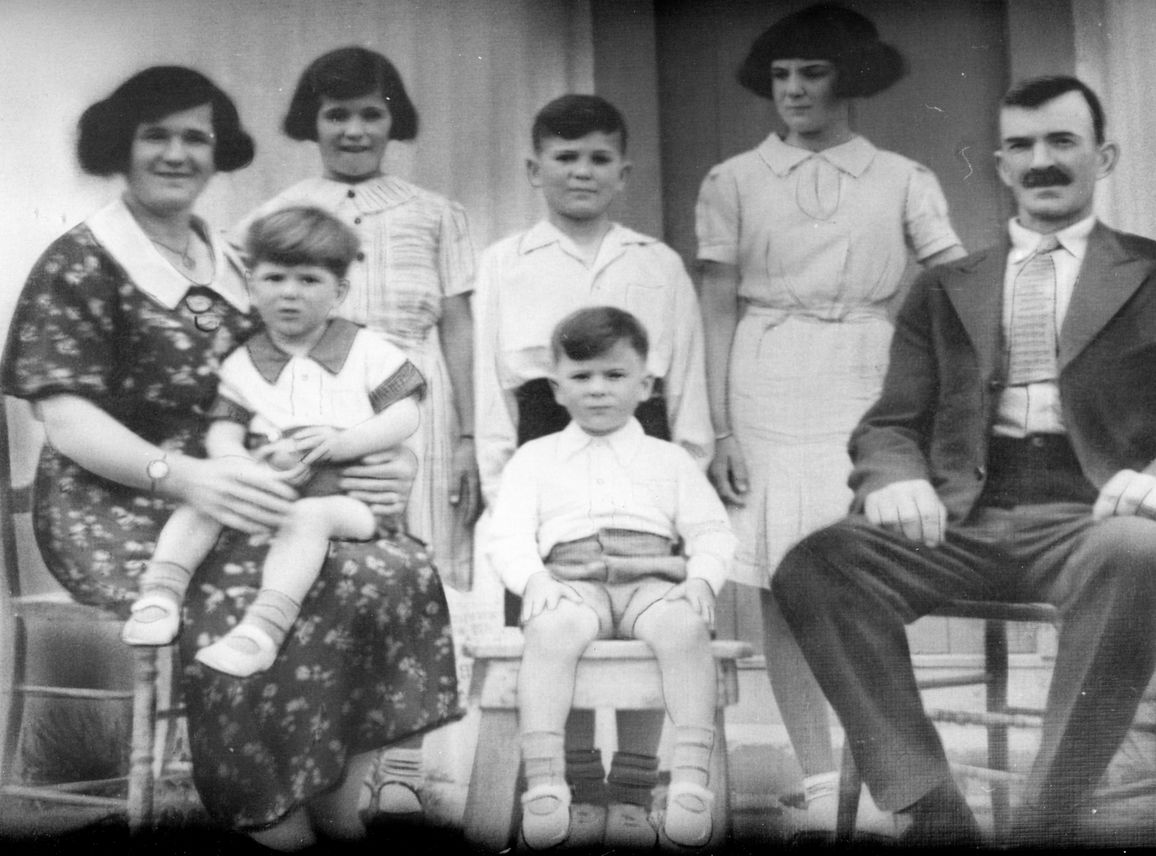 This is the story of the Brljevich family, who had very humble beginnings after arriving from Croatia but went on to create and run an internationally successful 5-Day Annual Fishing competition which ran for over 20 years.

Ante Brljevic was the son of farmer Ivan Brljevic and Katica, nee Barbir. Ante immigrated to New Zealand in 1911 at the age of 26 from Momici near Metković, a small village inland between Split and Dubrovnik in Croatia.

His brother, Mate, came out to New Zealand in 1908. The brothers worked together until 1912 when Mate returned home. Ante worked at a variety of jobs including drainage, work for the railways and gum digging. He worked in Taupaki, Hinuera, Dairy Flat, Hamilton, Te Kawa, Auckland, Aranga, Dargaville, Kaitaia, and Waiharara.

While in Waiharara he became friends with Kuzma and Jakica Matijevich and was introduced by letter to Katica Godinovich, Jakica’s sister in Bogomolje on the Croatian island of Hvar.

She was the daughter of Ivan Godinovic and Manda, nee Srhoj. They swapped letters and photos and it was the beginning of a long-distance romance. In 1925 Katica came out to New Zealand and they were married on 22 December.

The couple lived on the gumfields at Waiharara for three years in a shanty on Heath Road. Bachelor Peter Yelavich from Ravča lived nearby. In 1928 Ante was gum digging on the Sweetwater gumfields. He and Katica lived in a two-roomed hut overlooking Lake Rotorua, not far from Marin Vitle (from Tučepi). 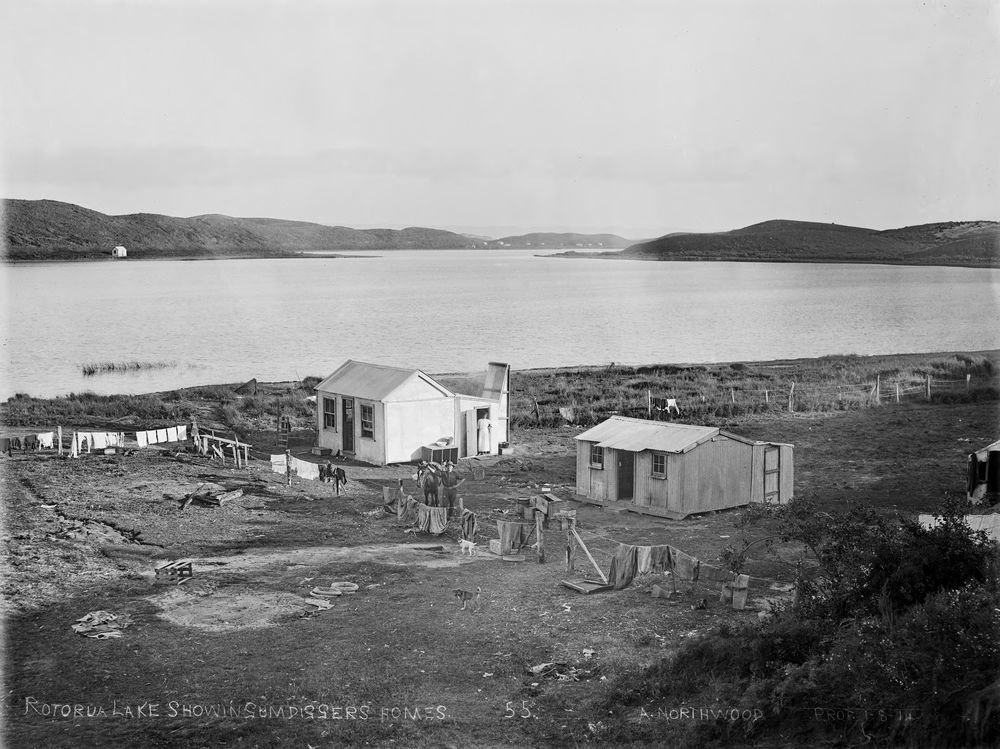 Their hut was built on skids so it could be moved with bullocks when necessary. Ante and Katica had six children: Gladys, Violet, Tony, Ivan, Victor and Ned.

In 1931 they moved to Ahipara Hill where the gum was more plentiful. Gum diggers moved from camp to camp due to the nature of the work and were always on the lookout for the best opportunities for finding good quality gum. Katica and the children didn’t always go with Ante as he moved searching for a good place to dig. They joined him when he was settled in a good area and moving the entire family could be justified. 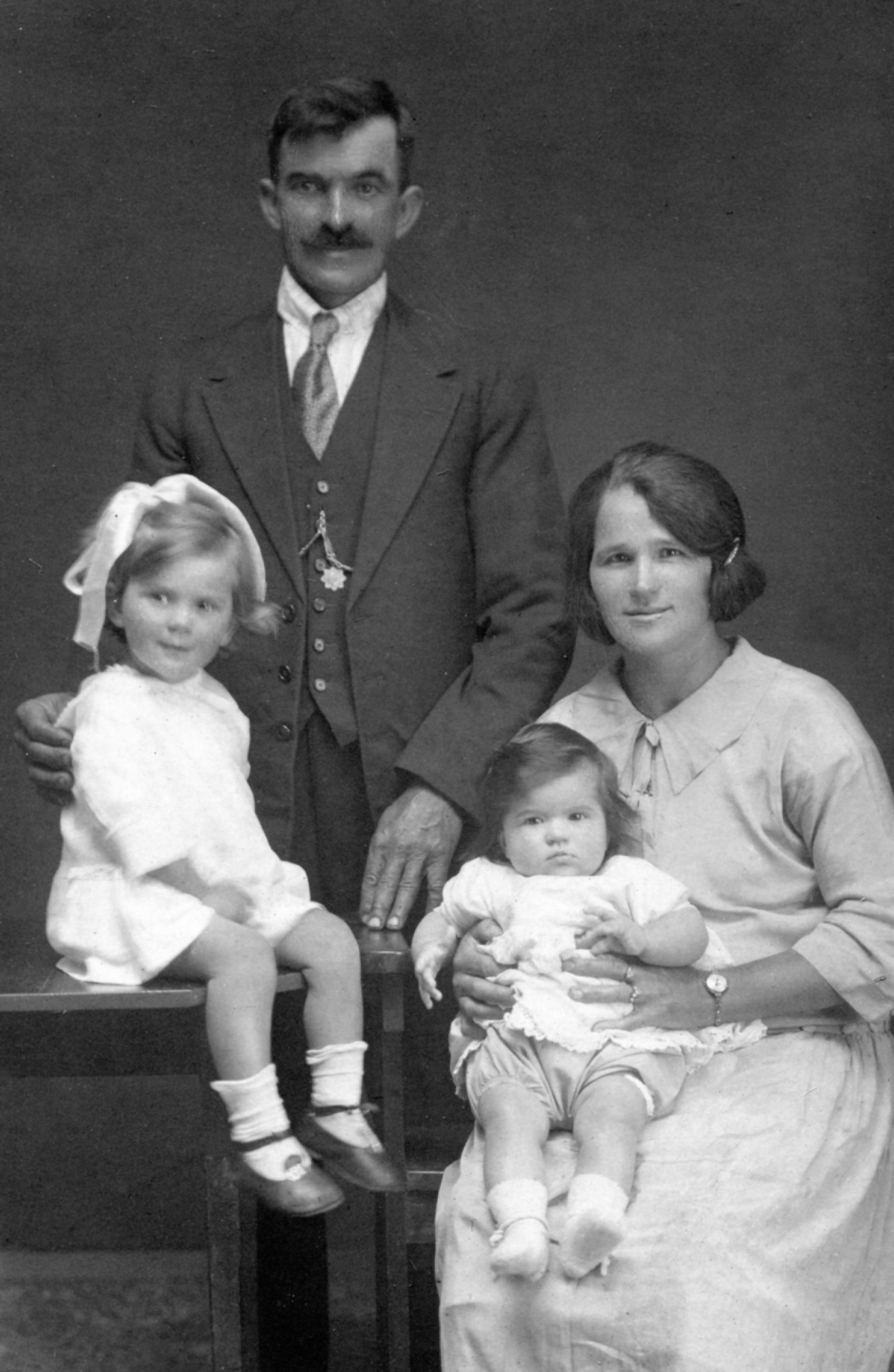 1929 – Ante and Katica with their daughters Gladys and Violet

In 1940 he got a job sharemilking on a farm near Awanui. Then in 1947 after 22 years of living in a series gum camps or in workers’ accommodation, Tony and Katica bought a section in the township of Kaitaia. Their new home was built by Ivan Marinkovich, Harold Thomas and George Jarrett. 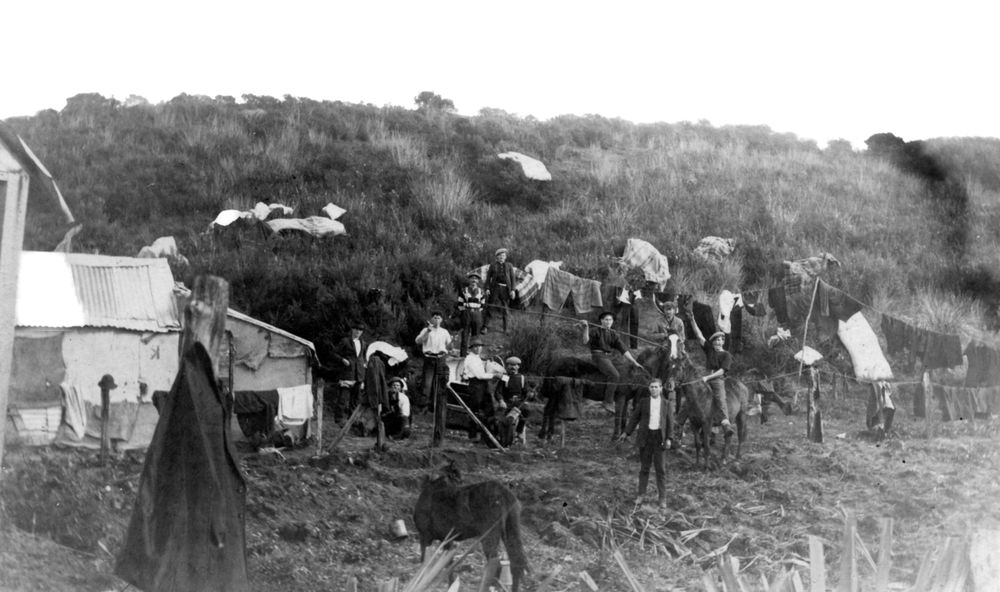 Ante took a job working in a local garage. Katica kept a large garden, she grew almost every vegetable imaginable, along with fruit trees, grapes and keeping fowls and animals. She sold vegetables and eggs and was a wonderful mother and homemaker. Tony recalled whenever his mother was away from home, if she came across good soil, she insisted on gathering all she could carry in her apron to take home for the garden. It was a habit carried over from life growing up in rocky Bogomolje, where soil was a precious commodity. Tony didn’t understand the value placed on soil until he visited Croatia many years later. 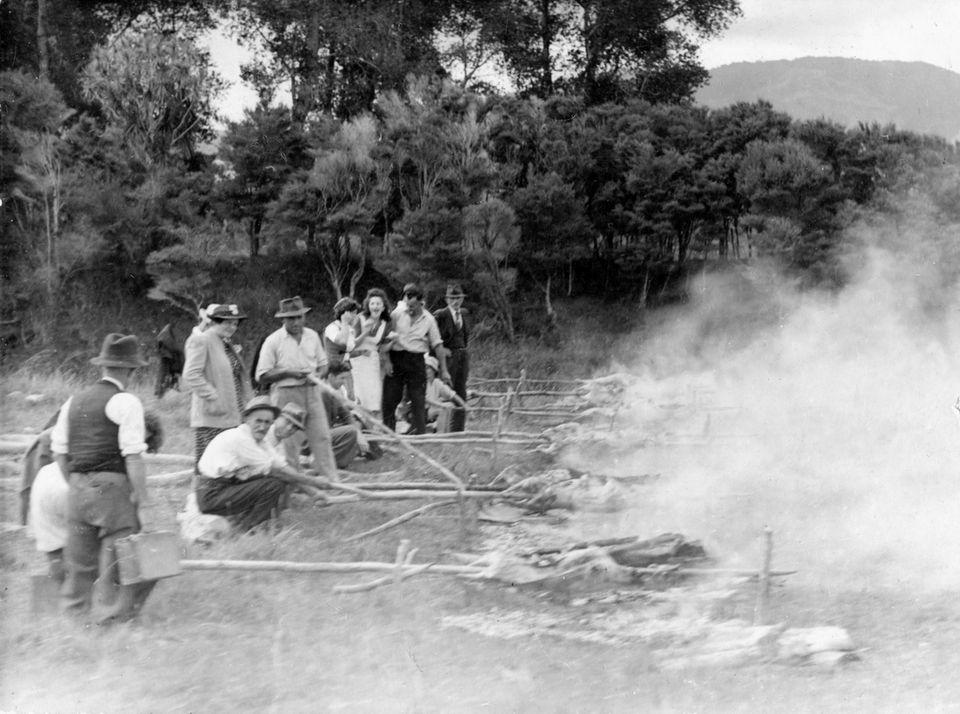 Lamb on the spit

Ante continued sharemilking until he retired, then he kept busy with part-time work for the Railway Services with his nephew George Marevich and he enjoyed playing bowls. He died in 1964 and Katica in 1985; they were both popular and respected members of the Far North Dalmatian community.

Tony served a panel beating apprenticeship then became a road construction contractor. He married Jean Shirley and they had four children; Judith, Ross, Keith and Paul. In 1956 Tony took his family to the big city of Auckland and started a contracting business. He specialised in road construction and drainage.

In 1970 the Lands and Survey Department advertised for applicants to build a motor camp at Waipapakauri Ramp, the gateway to the 90 Mile beach. Tony Brljevich was the successful applicant. Tony and Jean returned to Northland to build on five acres of land at Ninety Mile Beach on the edge of a pine forest. It was covered in lupins, trees and scrub. They set up a temporary home on site in a garage. 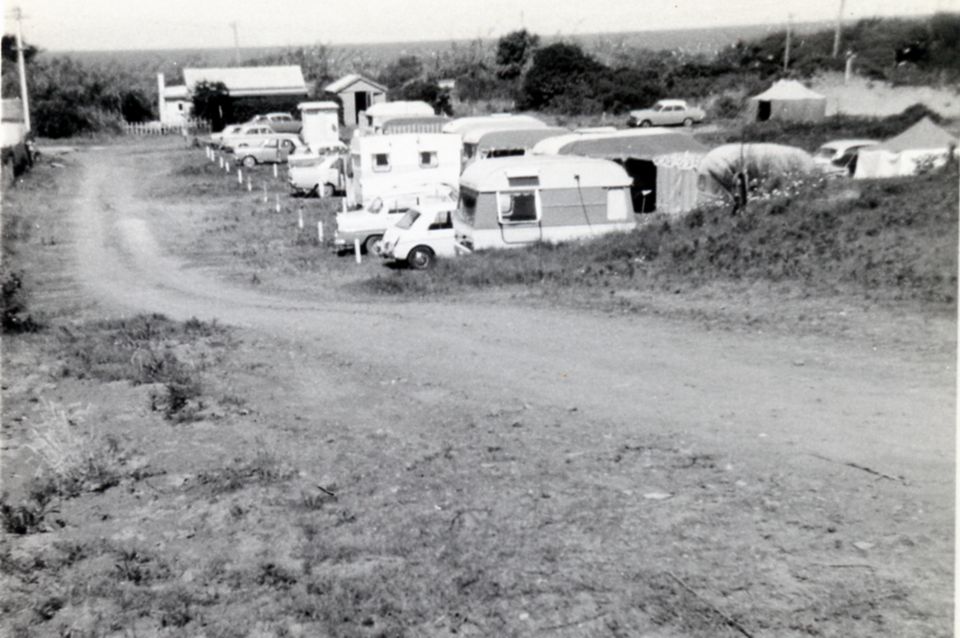 The Park Motor Camp at ‘the ramp’ Ninety Mile Beach

Their first campers arrived for the summer of 1970. The following year holidaymakers with caravans and tents filled the campsite. The popularity of the camp spread with return bookings made ahead for each season. Tony and Jean expanded the camp building cabins and a shared kitchen over the following years. 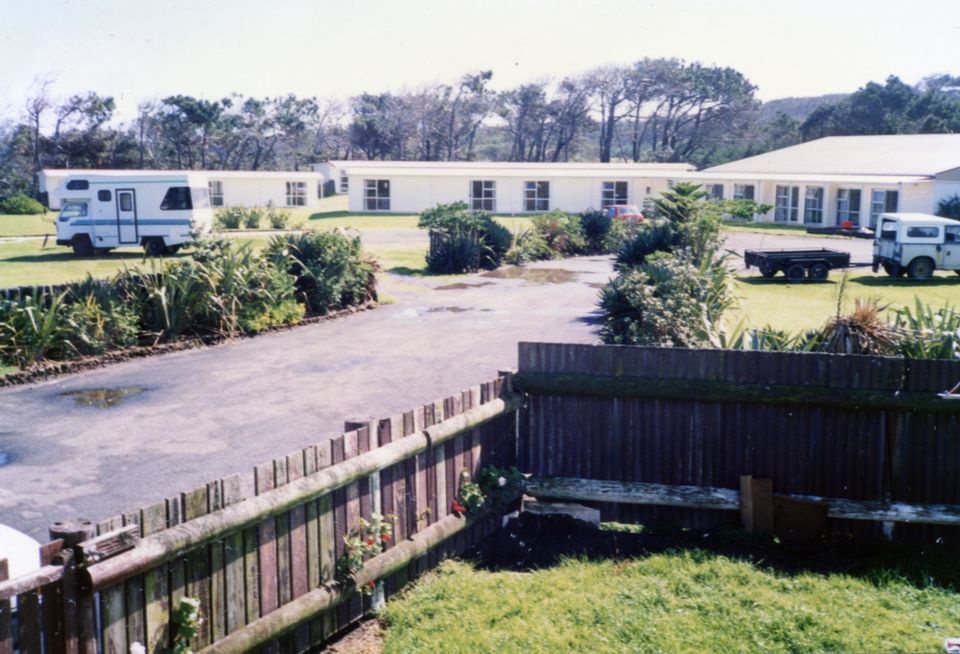 “The Park” in later stages of development

In 1973 they offered a traditionally cooked lamb on the spit as a regular Saturday and Sunday night meal at the camp. Tony built an indoor rotisserie capable of cooking lamb or pork. It was a first for the Far North. He cooked the meat and Jean prepared salads and roasted vegetables for the campers. It was so well received that along with campers, locals flocked out to the camp regularly for evening meals.

As the camp’s reputation grew, Tony came up with an idea to hold a big fishing contest to be run over five days. It would be a good way of promoting the camp and bringing more people to the Far North. Kaitaia and Awanui would also benefit by drawing in visitors from out of the area. Tony approached several organisations to see if they would take it on, in running it as a fundraiser. But no one was interested. 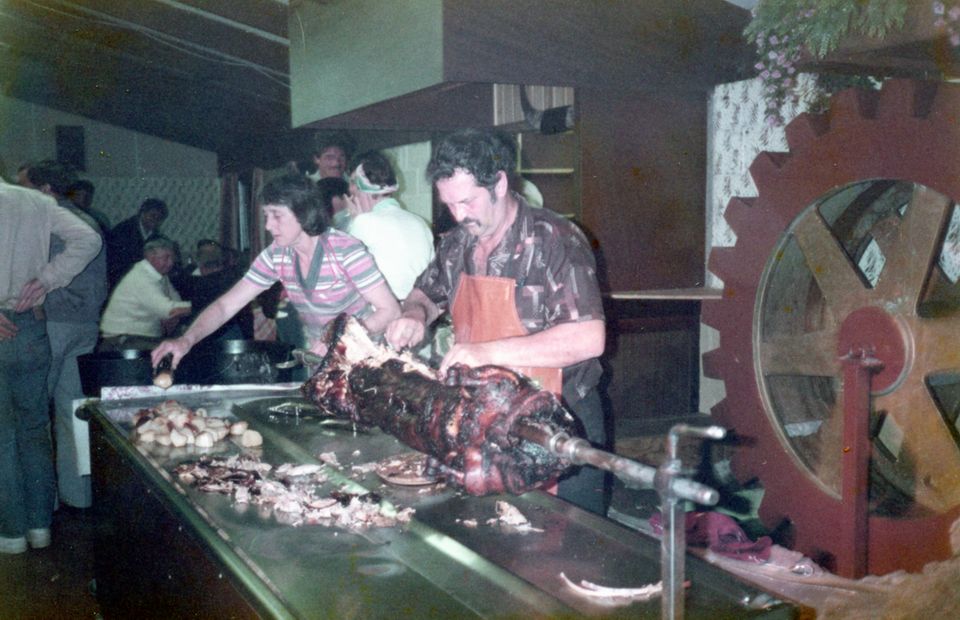 Rotisserie lamb, a regular evening meal on Saturday at the Park. Prepared by Tony and Jean Brljevich. They cooked traditional spit meals for over 30 years.

So in 1981 Tony and Jean ran the first competition, called the Ninety Mile Beach Snapper Contest. They put up significant prize money of $15,000 to draw entrants. 1000 tickets were put up for sale, but only 350 sold. The camp was full for the week of the competition. He said, “It’s better than Christmas”.

The first four years Tony and Jean Brljevich ran the competition with no outside help or sponsorship, promoting and advertising through newspapers and fishing magazines. Being in the tourist industry they could advertise in conjunction with tours. However, the first three years were run at a loss. A lot of people were skeptical; “Serves them right, it will never work!” But persistence and Dally determination drove Tony and Jean on to persevere with it. “If it doesn’t work, find a way to make it.” 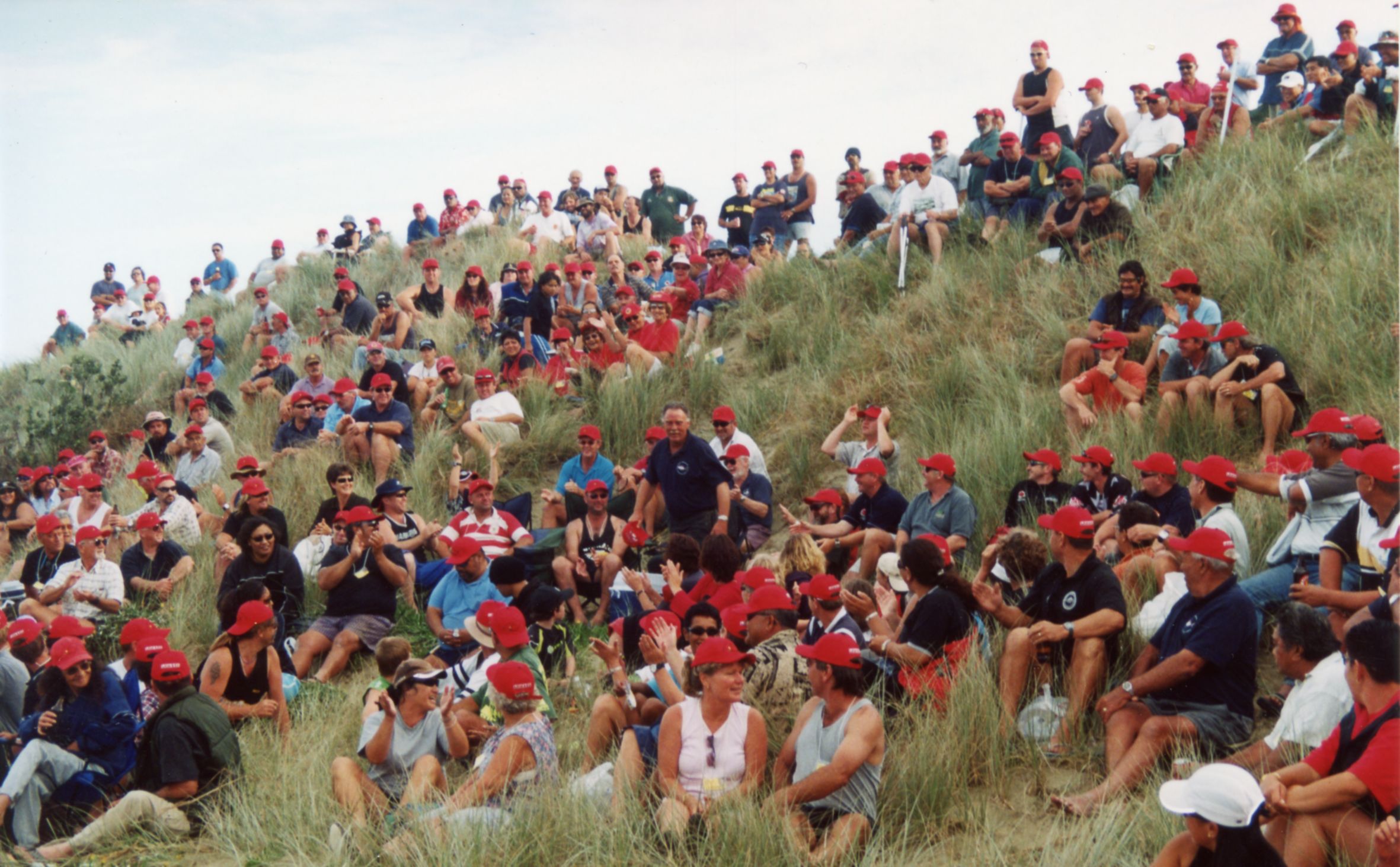 The fourth year of the competition was a terrific success. The skeptics changed their tune. “Typical Dally, everything he touches turns to gold!” How can you beat logic like that?

By 1985 the popularity of the competition had gathered momentum, the numbers of entrants from overseas increased. Both sons Ross and Paul helped run the competition. 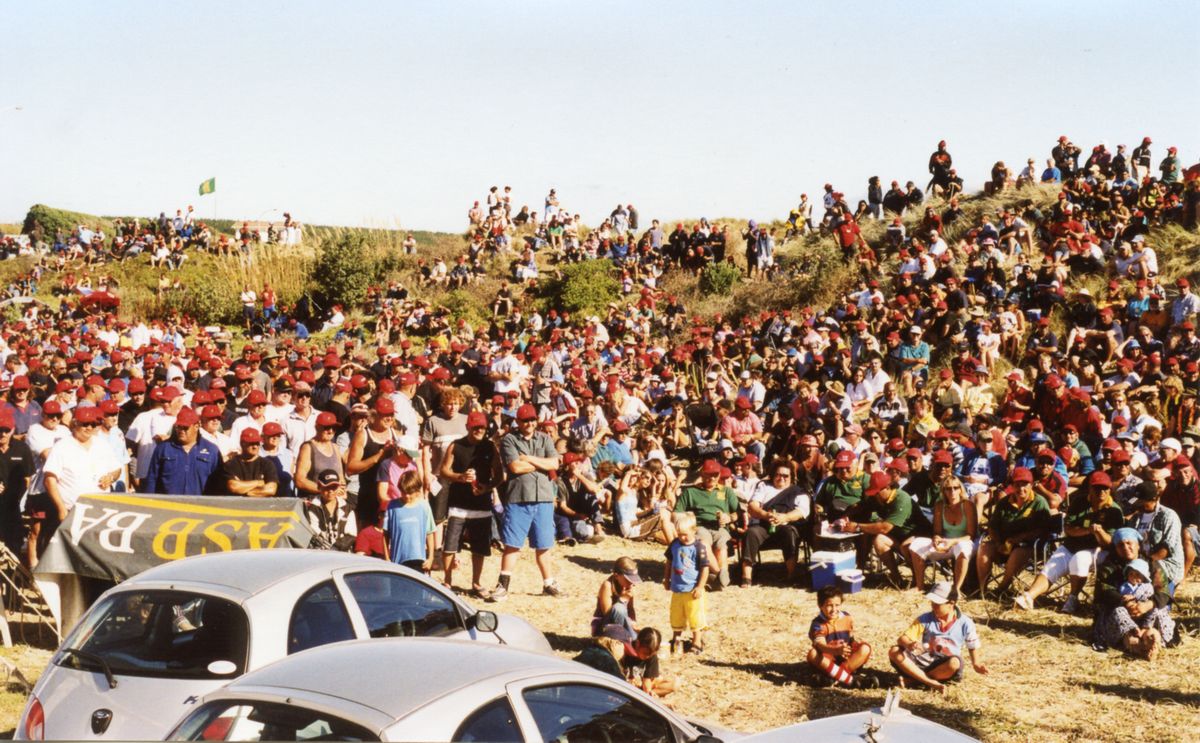 They kept the same format each year but fine-tuned to make improvements. The prize money increased and it was no trouble to sell 1000 tickets. The competition was a highlight on the Far North calendar.

The Brljevich family demonstrated rare dedication and tenacity organising, marketing, running and building the event to be an outstanding success. They attracted many top New Zealand anglers as well as overseas contestants from Australia and globally, all drawn to the Far North for the week of the competition. Fishermen brought their support crews and they all spent money in the area. The competition became as famous as the Ninety Mile Beach itself. Major sponsors were keen to come onboard. 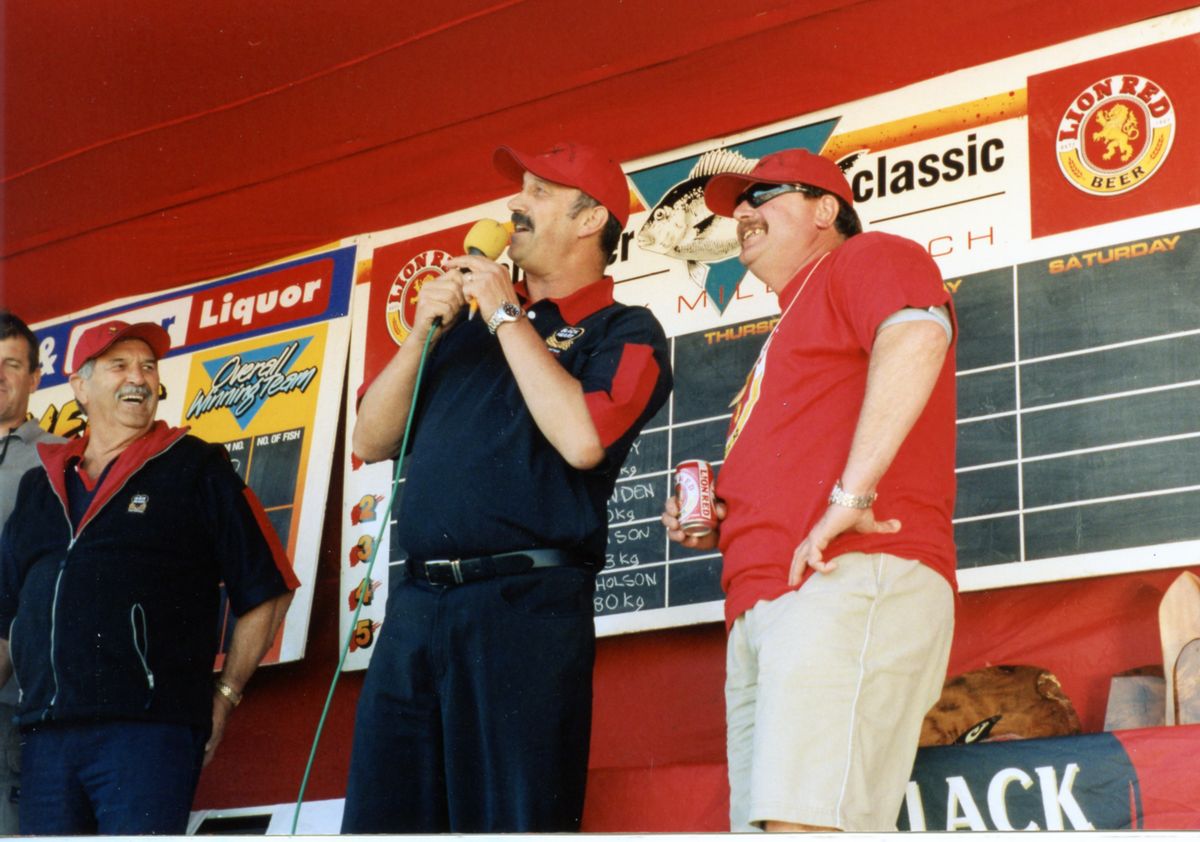 In 2002 it was estimated that the five-day spectacular event gave prizes and giveaways of $250,000 and the competition brought about $2 million to the Far North’s economy. It was the largest promotional event of its type in New Zealand. Run as a true family affair, with Tony and Jean, Ross and Paul virtually eating, sleeping and breathing the Snapper Classic for months before the event was held. They covered all the details and arrangements necessary and successfully ran the competition as a family project for 25 years. 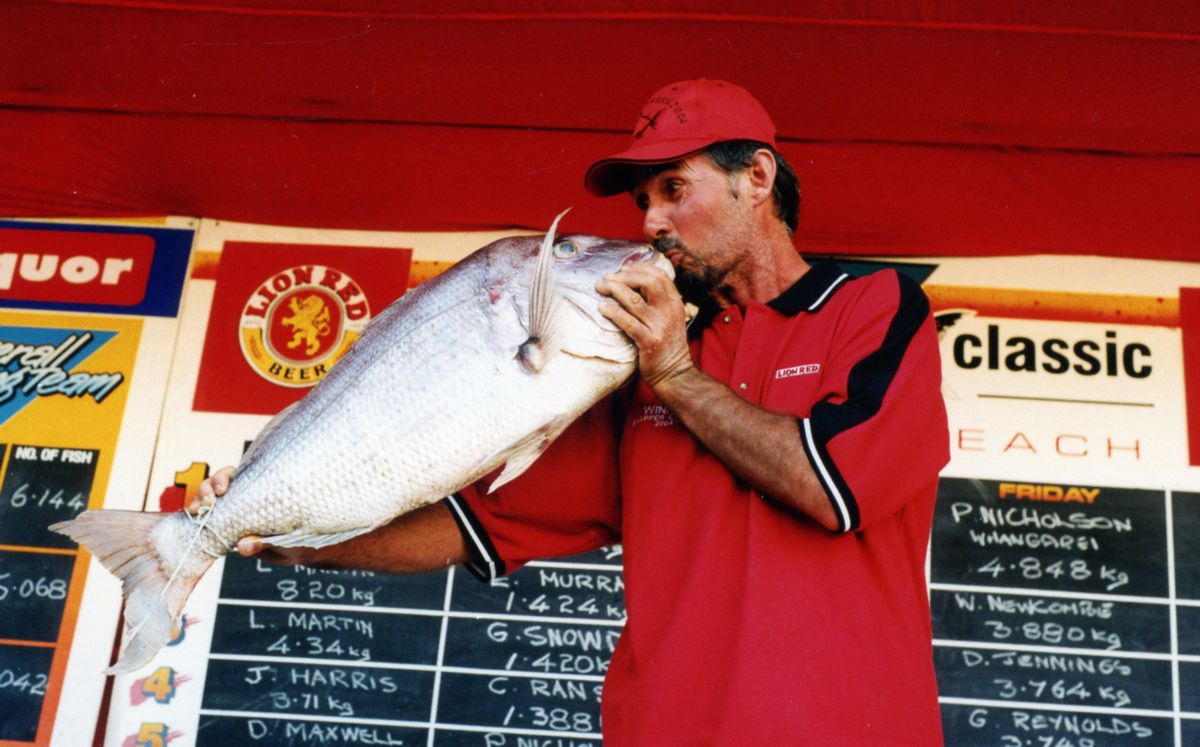 Tony is a fine example of a first generation Dalmatian born in New Zealand, a quiet achiever who is passionate about the North. He is a proactive member of the Awanui Community Board and has done much to support the progress of the district. Jean worked by his side through the years and supported him in all his endeavours. In 2004 they sold the business and retired to a home overlooking the Awanui River. Their pristine houseboat moored almost at their doorstep. 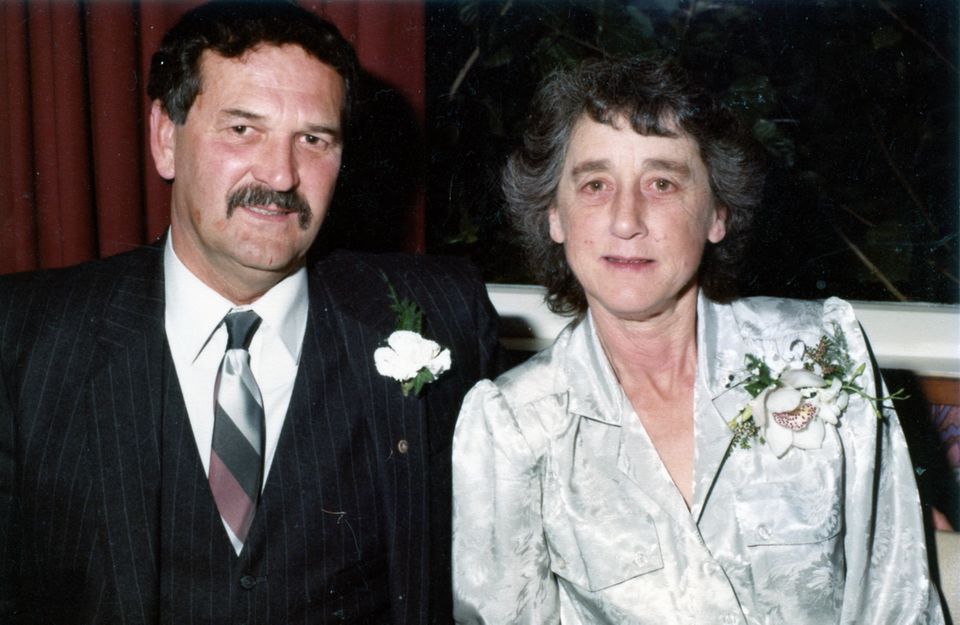