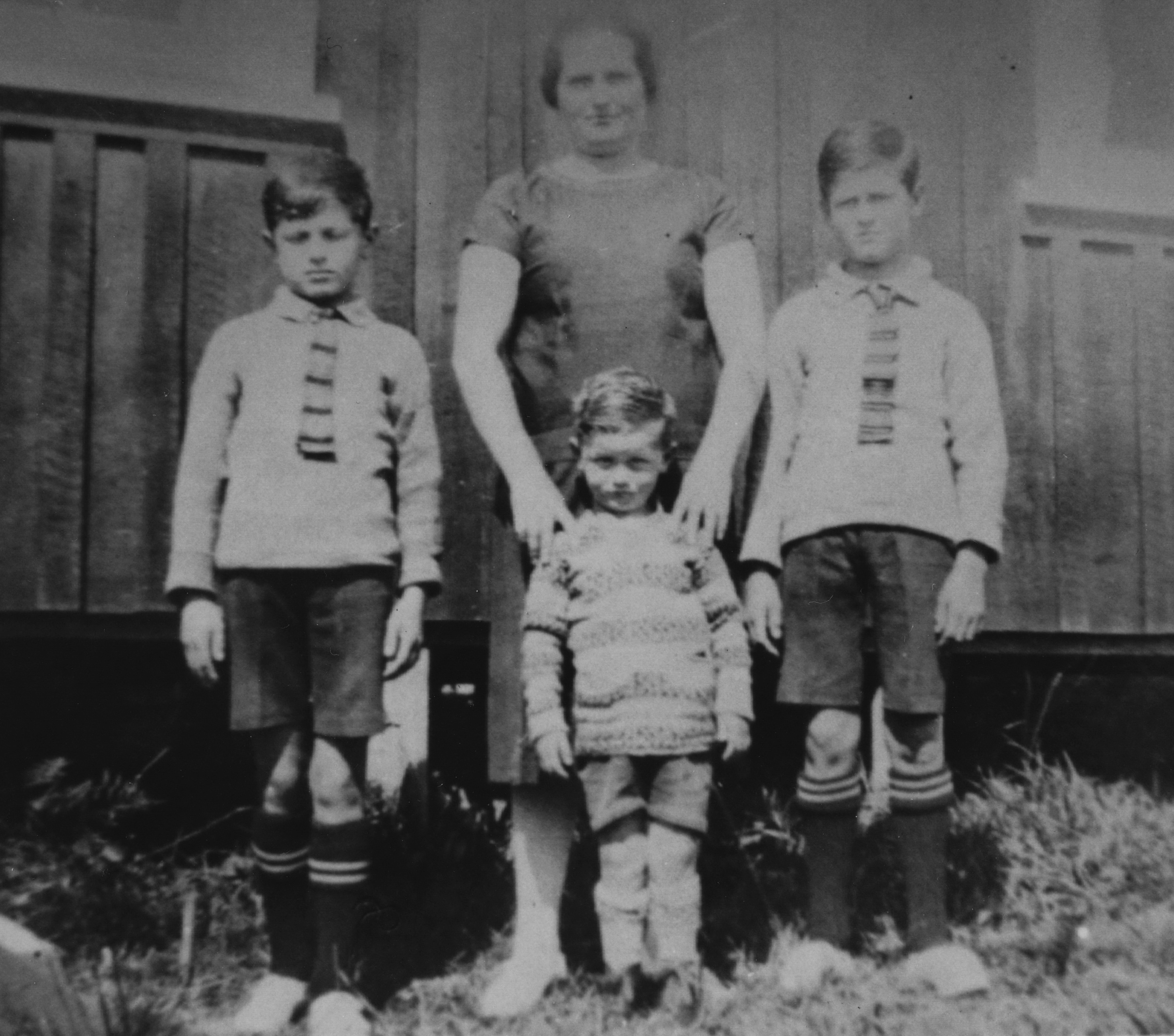 Marija Belich with Nik, Jim and Tony, outside their cottage at Sweetwater.

One interesting story from the book features the Belic family who arrived in New Zealand from the island of Korčula.

Jakov Belich’s family originates from Kampus in the village of Zrnovo on the island of Korcula. The story of the family’s move to New Zealand began with Nikola Belich, father of Jakov.

Nikola was born in 1864, the fifth of nine children born to Jakov Belic and Kata Batistic (both born in Zrnovo).  In 1891, Nikola married Ursa Matulovic and they had seven children; Kata, Mara, Jakov, Marko (Cyril), Jaka, Nikola, and Kata (2).

Nikola was a sailor in the Austro-Hungarian Navy, an experienced traveller and was in China at the time of the Boxer rebellion. He visited New Zealand more than once, arriving for the final time in 1909 with his 14-year old son Jakov. (Nikola’s wife never came to New Zealand).

Nikola and young Jakov began gum digging on the Coromandel, along with other Dalmatians including a cousin called Javich, Nikola Musich (Planda) from Lumbarda and Baldo Vicelich. In 1909 Jakov was naturalised, listed as gum digger of Mangawhare, Dargaville. After two years, Nikola returned home to Korcula, leaving Jakov to remain in New Zealand. Marija Belic with Ante (Tony) and Nikola before their departure for New Zealand. (this was used as their passport photo)

In 1912 Marko, Jakov’s brother, arrived in Auckland. The brothers were in the Dargaville area where they worked at Grebo Camp, Rusich, Fish Camp and First Camp.

The following year Jakov returned home. At around this time their younger brother, Nikola junior, also established himself in New Zealand.

Jakov was 19 years old when he arrived back in Korcula.  He had experienced a great deal in five years, sailing with his father and working.  In 1915, at the age of 21, he was called up to serve in the Austrian Armed Forces. He ended up on “Torpedo Boot Eins” – (Torpedo Boat One) which formed part of the naval defences of the Empire.  It would not be considered of the greatest naval assets, even of the largely land-locked Empire.  It was a very small ship – more of a launch.  Jakov experienced some action including the bombing of his torpedo boat by the Italians. This must have been one of the very first air-to-ship attacks in the history of warfare. 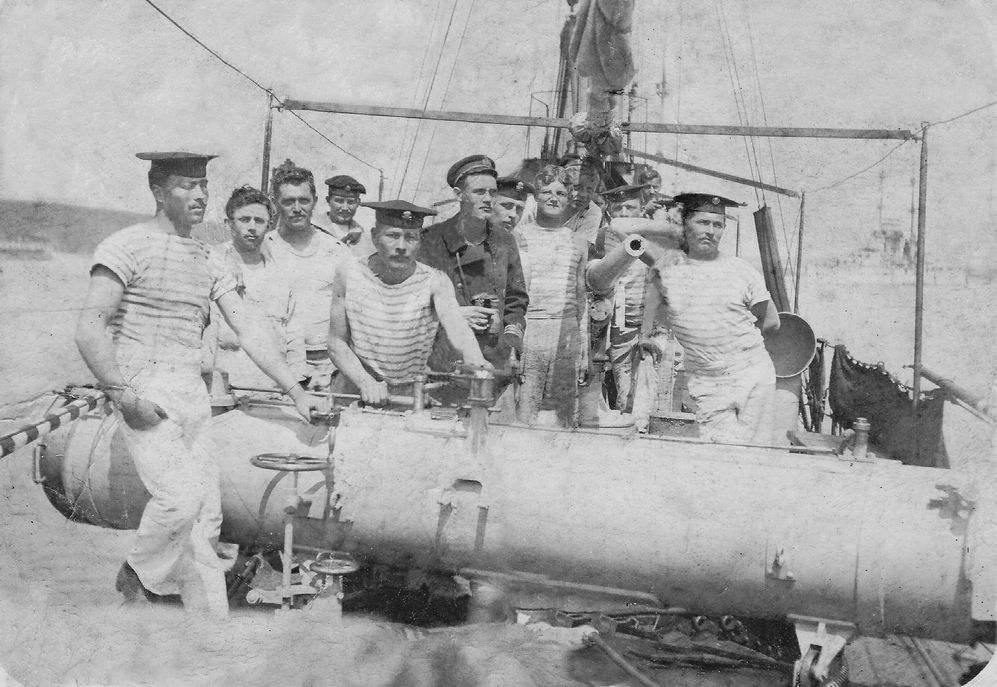 During World War I, Jakov Belic aboard his ship. The photo was damaged but still a unique image of a New Zealand citizen on the ‘other side’. He is the man leaning on the gun on the far right.

After the war ended and his demobilisation, Jakov married Marija Batistic from Zrnovo on 18 June 1919.  She was the daughter of Antun Batistic and Jaka, nee Grbin. Marija was regarded as being very intelligent, well-educated and she was considered to be a great beauty. Needless to say, she had no shortage of suitors.

Marija Belich with Nik, Jim and Tony, outside their cottage at Sweetwater.

Korcula was still occupied by the Italians and there was practically no work available. Jakov had to leave the area to find employment. He went to Belgrade and Gruz, (Dubrovnik).  By 1923 he realised the best option was to return to New Zealand but this meant leaving Marija and their two young sons, Nikola and Ante, behind.

Jakov went to Makuri at Sweetwater, near Awanui. Fortunately for Marija she was forewarned of the harsh living conditions that gum diggers and their families endured. She flatly refused to come out and join Jakov until a “proper” house had been built. Jakov borrowed £400 from his friend Clem Jurlina, the store keeper and gum buyer. He built a wooden house with just two small rooms, plus a living area. Later, an add-on was built with an open fire for heating and cooking.  In 1926 Marjia arrived with Nikola and Ante (Tony). Their third son James (Jim) was born at Sweetwater in 1927, delivered by a Maori midwife. 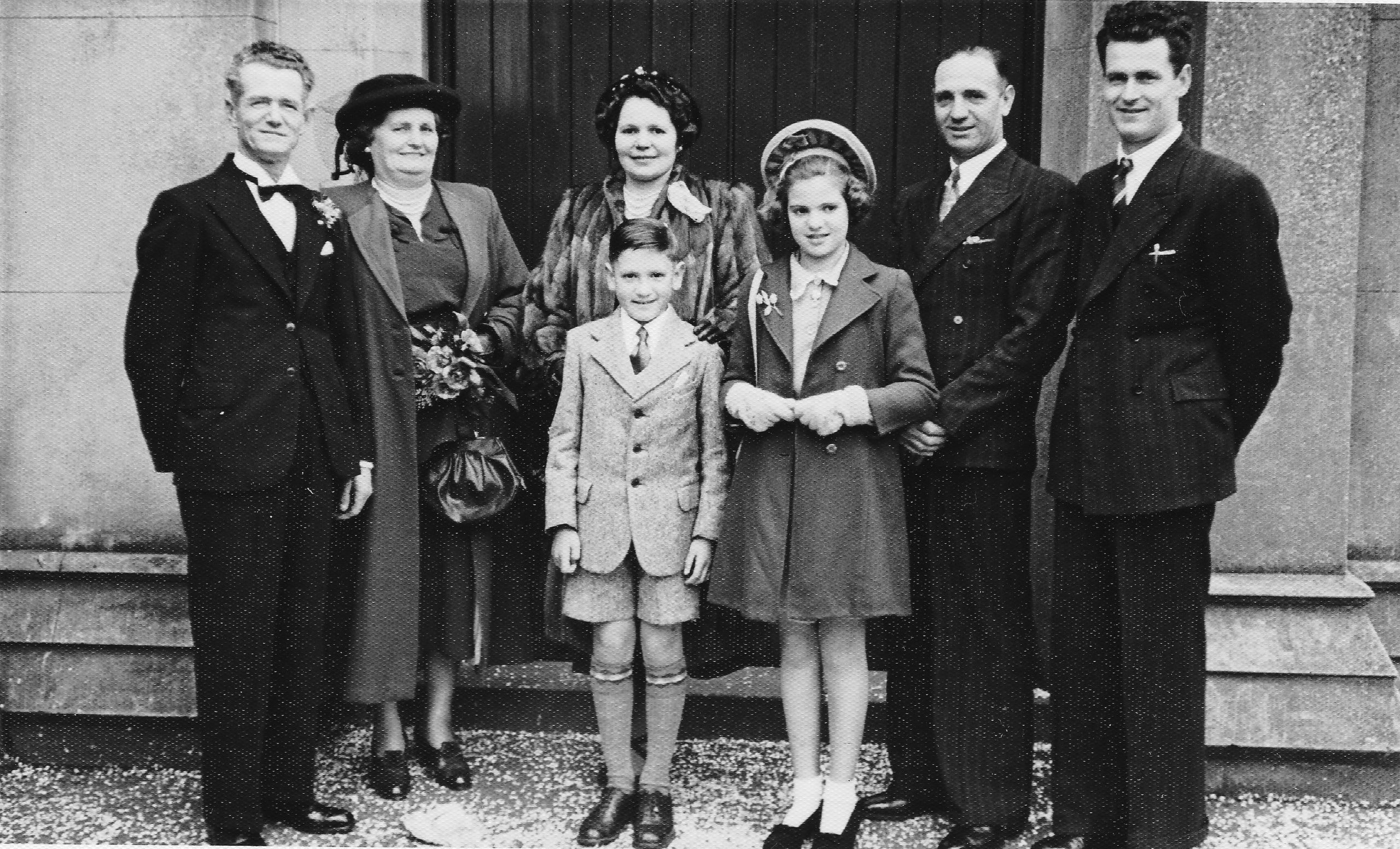 Jakov and Marija Belich, with Nevenka and Peter Batistich (Marija’s brother) and Tony Belich. In front, Terry and Rita Batistich.

In 1929 the family moved to Okaihau, as Jakov had secured work building the railway line. In 1931 they returned to their home at Sweetwater and Jakov was employed doing relief work planting marram grass on the southern end of Ninety Mile Beach for dune stabilisation.

Dalmatian gum diggers longed for the familiar music of home. In 1930, a group of diggers had the foresight to send for instruments from America. The Belich family was right in the forefront when the band was formed. Peter Batistich, Marija’s brother, was the leader of the band. Young Tony Belich tuned the instruments and Nikola Belich became a member of the band.

Jim Belich and Victor Jurlina became great friends.  They were born just a month apart; they rode their bikes to school together and played rugby together. The Belich family worked on the Sweetwater fields until 1937 at which time it was obvious the gum trade was in serious decline.  The family moved south. Jakov took a number of farming jobs before he secured a permanent position at Blue Stone Quarry.  The family settled at 57 Panorama Road, Mt Wellington, Auckland. Incidentally, there were 10 other Dalmatian families living on the same road, many from Korcula.

The Belich brothers – first Nik and Tony, and then Jim later on became popular musicians in the Dalmatian community. About 1939 they were responsible for buying what is believed to be the first electric guitar in New Zealand – a Hawaiian steel string guitar. They also persuaded a Dalmatian electrician by the name of Glucina to put a pick-up (used to amplify a stringed instrument, a pick up picks up the vibrations of the strings to make the sound) in the traditional Dalmatian tamburica, and so creating, they believed, the first electric Dalmatian folk music. Jim was the only son in the family who received secondary education.

While Victor Jurlina was studying at Auckland University in the late 1940s, he boarded with the Belich family. Jim and Victor renewed their friendship and the bond they shared as young boys grew into a lifelong friendship. 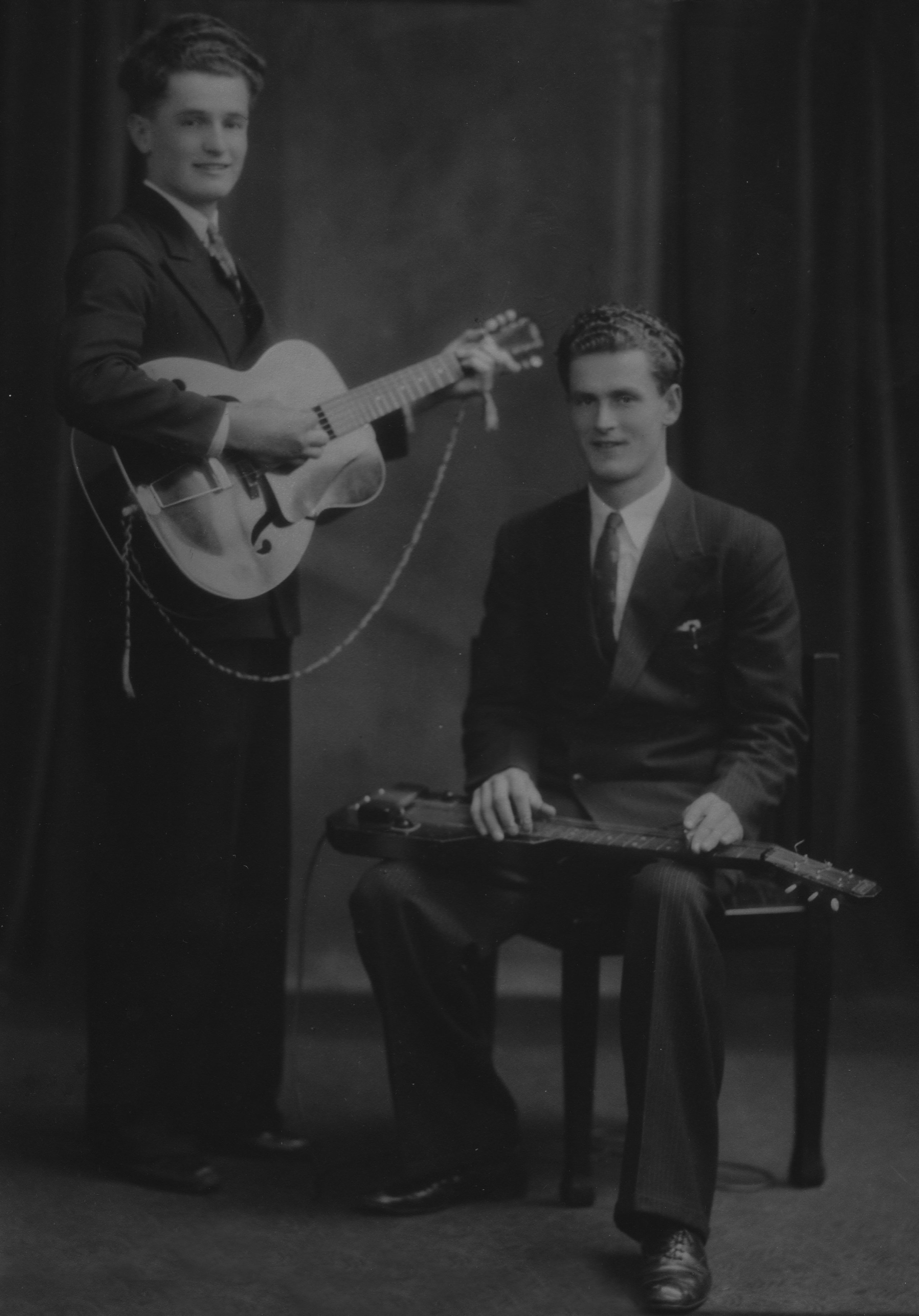 Jim worked for the Yugoslav Consulate in Auckland, Sydney and later Wellington, both in a full-time capacity and as a volunteer. He then pursued work in the field of advertising, becoming Managing Director of the country’s second largest advertising agency, J.Inglis Wright. Jim also became the founding Chair of UNICEF New Zealand, Chair of the International Year of the Child in 1979 and President of the United National Association of New Zealand. Between 1986 and 1992 he served as Mayor of Wellington. He was knighted in 1991. The first New Zealander with two Croatian parents to be knighted.  In 2008, Sir Jim was made an honorary citizen of Korcula. 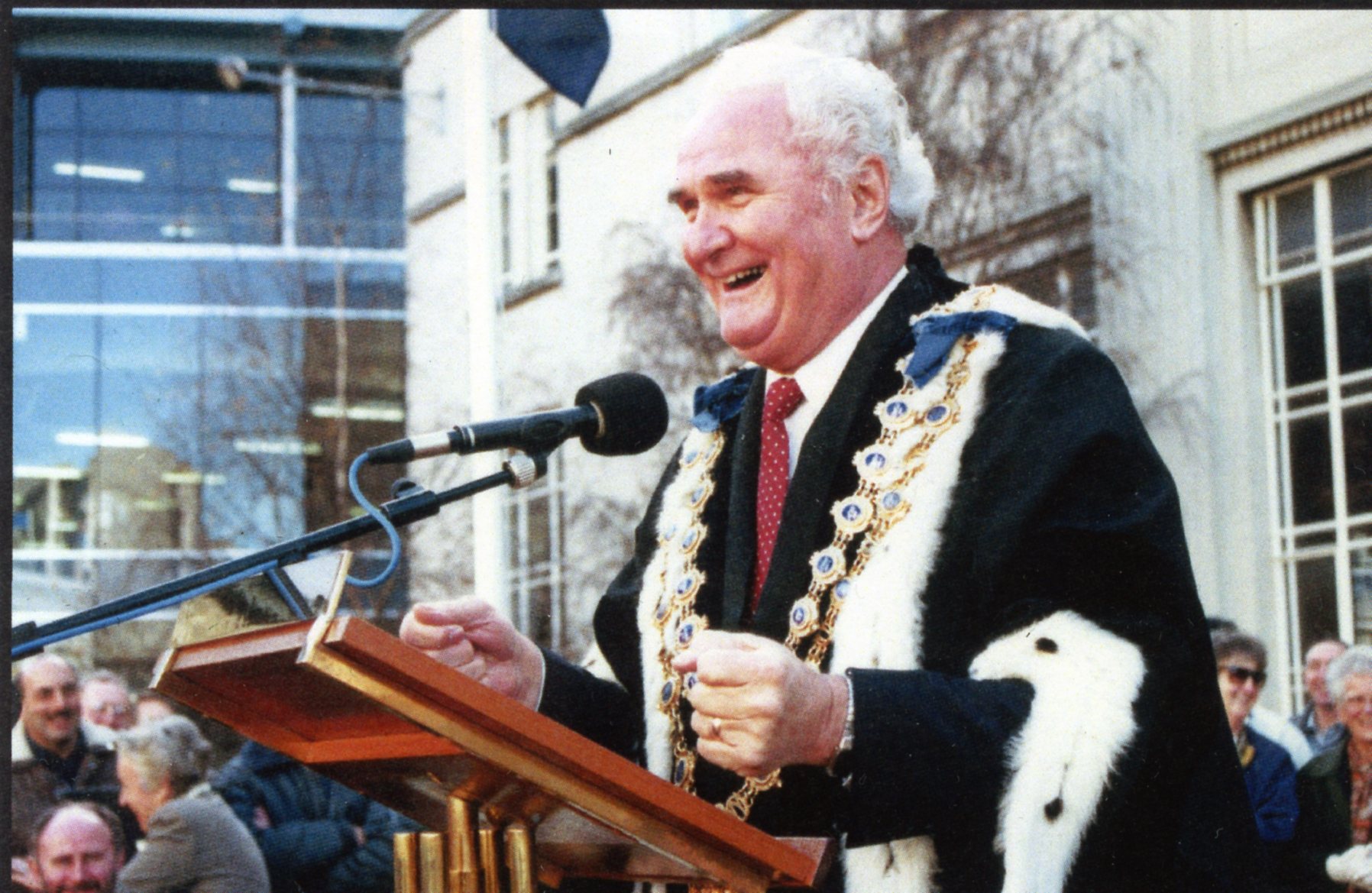 Sir James Belich said, “It is important that people don’t forget their origins”.