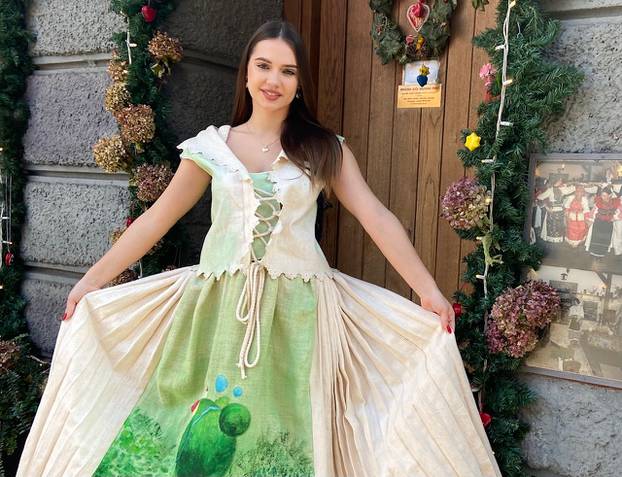 20-year-old Arijana Podgajski from the northern town of Krapina will represent Croatia at the 71st edition of the Miss Universe pageant which will take place in New Orleans.

The dress was inspired by traditional national costumes of Croatia’s northern Zagorje County. This region’s slogan is “A Fairy Tale Within Reach” as everything that every real fairy tale must have is there – abundance of forests, castles, museums, thermal springs, churches, hidden paths, vineyards and wine routes, delicious food, lovely people, stories, legends and songs.

The base of the costume is an off-white hand-woven 90-year old linen fabric with a hand-painted symbol of the region on it by academic painter Antonia Maričević which shows what makes this area so beautiful – rolling hills with small wooden houses with red rooftops, clear streams and rivers and above it all clear blue skies spared of any kind of pollution. “Green is in” was the the guiding light for designer Mina Petra as she used only natural materials for her design. 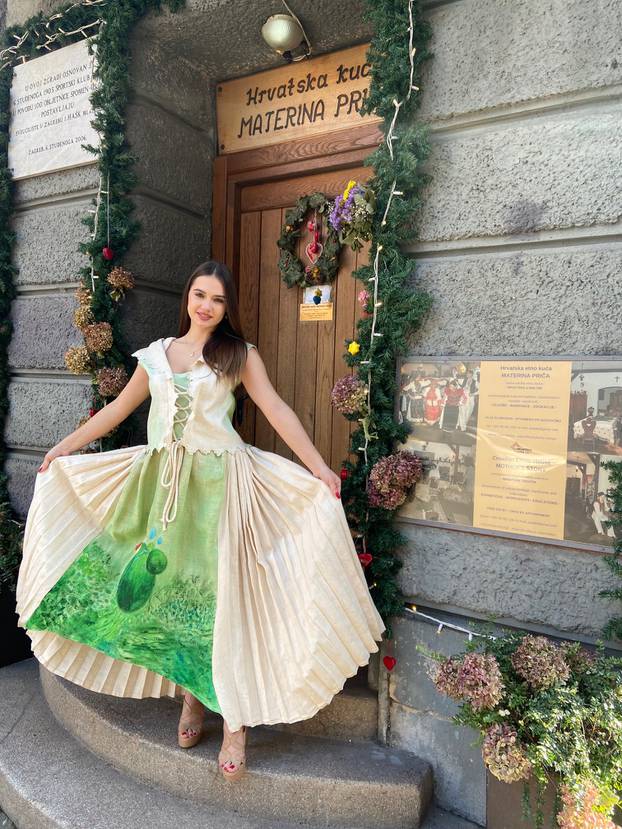 Arijana did not hide her excitement about attending the Miss Universe pageant, which will be her first time in America:

“I am very excited and happy that I have been given this unique opportunity to represent Croatia on the world stage such as Miss Universe pageant. It really happens once in a lifetime. I am extra excited because for the first time I will in a fly in a plane and to America, to New Orleans, one of the most beautiful American cities according to many. I am glad that I will bring a part of my Zagorje to America wearing this national costume but also the cloak that we are not allowed to show you yet. I can only say that it reminds me of the green hills of Zagorje that surround my hometown and licitar hearts, which are a symbol of sympathy, loyalty and love, which is the message I want to share with the world.” “We sincerely thank Prefect Kolar and the Tourist Board of Krapina-Zagorje County because they recognised the possibility of huge promotion of Zagorje and our “Green Croatia” on the world stage, such as the Miss Universe world pageant, and allowed us to use the “Fairy Tale in the palm of your hand” logo. Thank you very much for your help in equipping Arijana, who will wear traditional jewellery in addition to her national dress, golden licitar hearts made by Zlatarnica Vrančić from Zabok, and valuable gifts that she will give to the other contestants and the hosts,” said the owner of the pageant license, Vladimir Kraljević.

Arijana, who is a 20-year-old student of economics at the Zagreb School of Economics and Management, won the title of Miss Universe Croatia 2022 at the end of May in the Emerald Hall of the Esplanade Hotel in Zagreb. 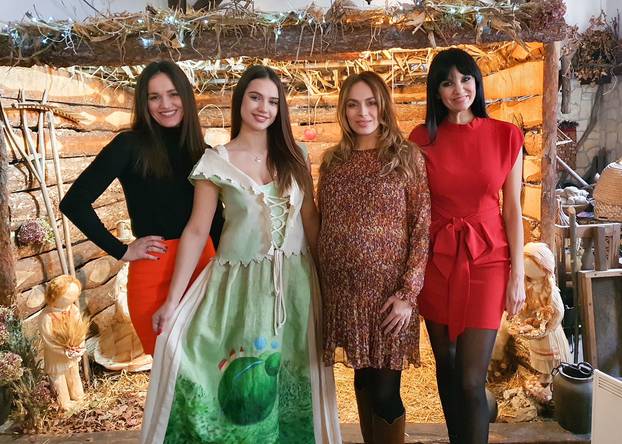 She will travel to America in the first days of the new year for the Miss Universe pageant, which will be to be held in New Orleans on January 14, 2023.

Arijana will bring gifts for the other contestants prepared for her by the Tourist Board of the Krapina-Zagorje County, including Licitar hearts, declared by UNESCO as intangible cultural heritage, with the Zagorje logo – a fairy tale on the palm of her hand, and bracelets with licitar heart motifs, while the Croatian Tourist Board has prepared environmentally friendly cotton bags, licitar hearts, lavender and ballpoint pens.

Arijana was supported at the presentation by some of the former holders of the Miss Universe Croatia title: Ivana Delač (2003), Lana Obad Jurič (2010), and Ivana Mišura Vlaović (2014).