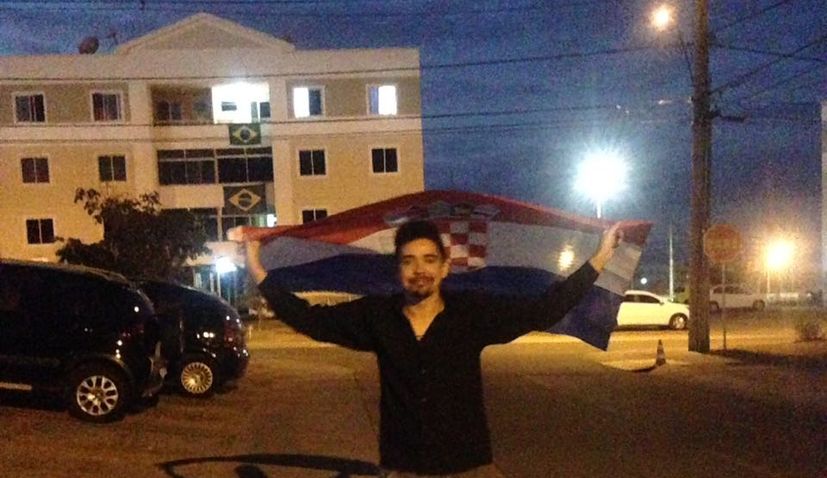 Meet one of the most fanatical Croatian fans in Brazil and he is Brazilian.

Earlier this year one of the Croatian team’s main sponsors, Zagrebačka Pivovara (Zagreb brewery) ran a promotion asking fans what they would give up if Croatia won the World Cup.

One comment stood out from the rest and it did not come from a Croatian but a Brazilian.

“I am Brazilian but I love Croatia since I was 5 years old! Well, I would sacrifice many things! One of them would rather be born in Croatia. Although that would not be a sacrifice hahahaha, but since I can not do it, I would offer my house to see Croatia world champion! Something I been waiting for a long time,” Francisco Rafael Beserra Sousa wrote.

His comment impressed and it was shown on the big screen when Croatia’s World Cup squad was announced. 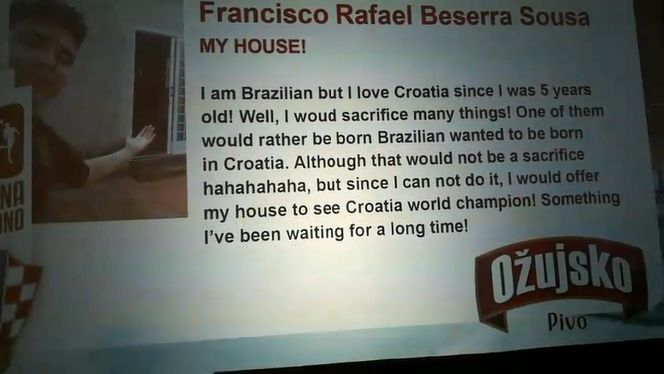 The comment was shown when the Croatian squad was named

With Croatia just one game away from that reality we caught up with the mad Croatian fan from Brazil’s capital Brasilia.

“My passion for Croatia started when I was 5 years old in the 1998 World Cup, I was watching Croatia vs France semifinal and my whole family was anxious with the Brazilian team who were playing the Netherlands, it was the first football game I saw and I was amazed by that team of the chess uniform, Croatia lost that game but I decided on that day that I would follow the Croatian team!,” Francisco says. 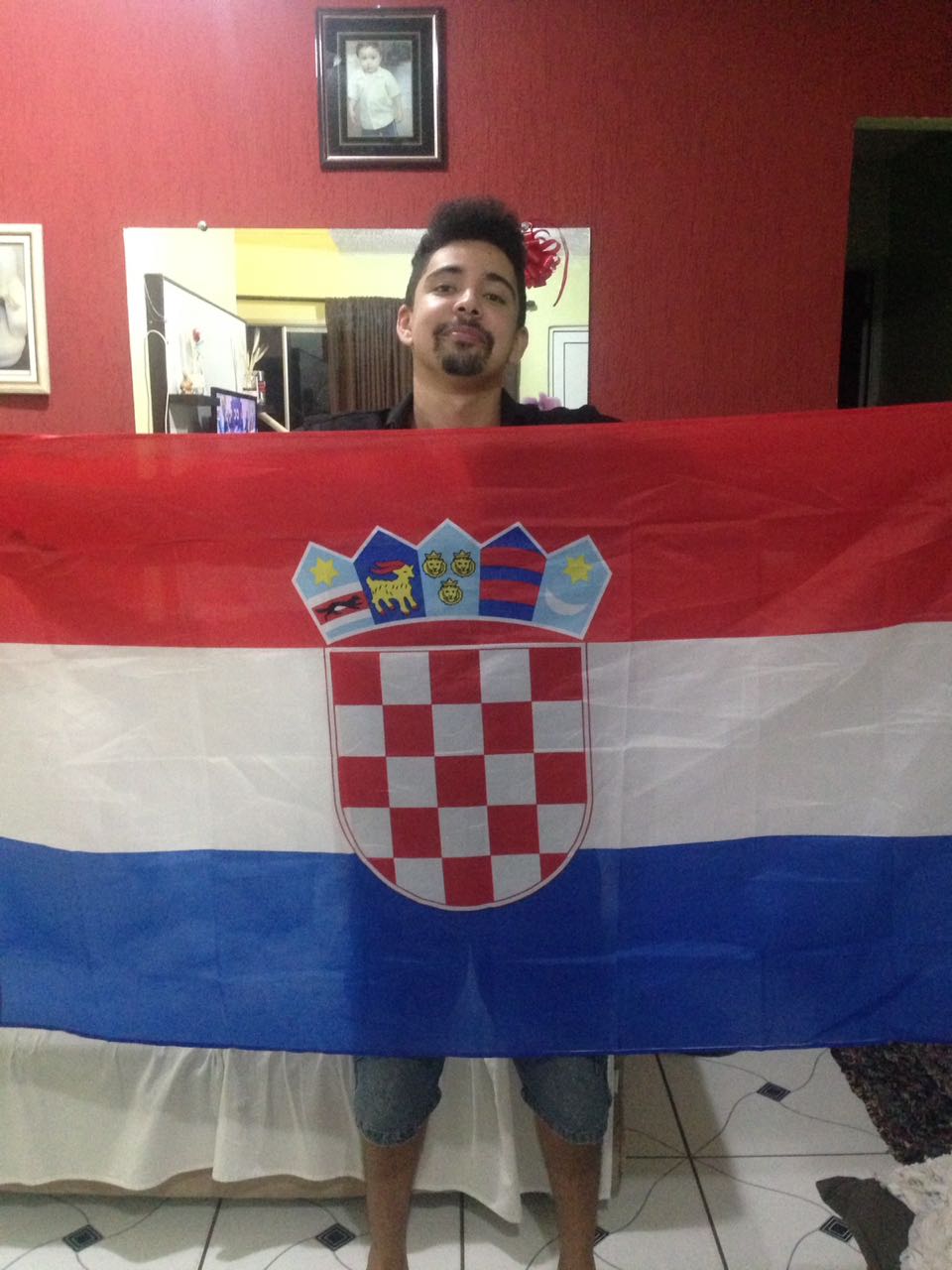 “People in Brazil do not understand I do not feel passion for the Brazilian team that already has won 5 world titles, Croatia filled everything I could feel for the Brazilian team. Since then I’ve been following all the matches in Croatia to this day! I have always wanted to be a football player of the Croatian national team like Eduardo da Silva, unfortunately, I could not fulfill that dream, now my biggest dream is to be the coach of the Croatian national team!”

Francisco says that his favourite player was Ivan Klasnic and that he will always remember him and all the difficulties he went through with his health. Another favourite is the current Croatian winger Ante Rebic. 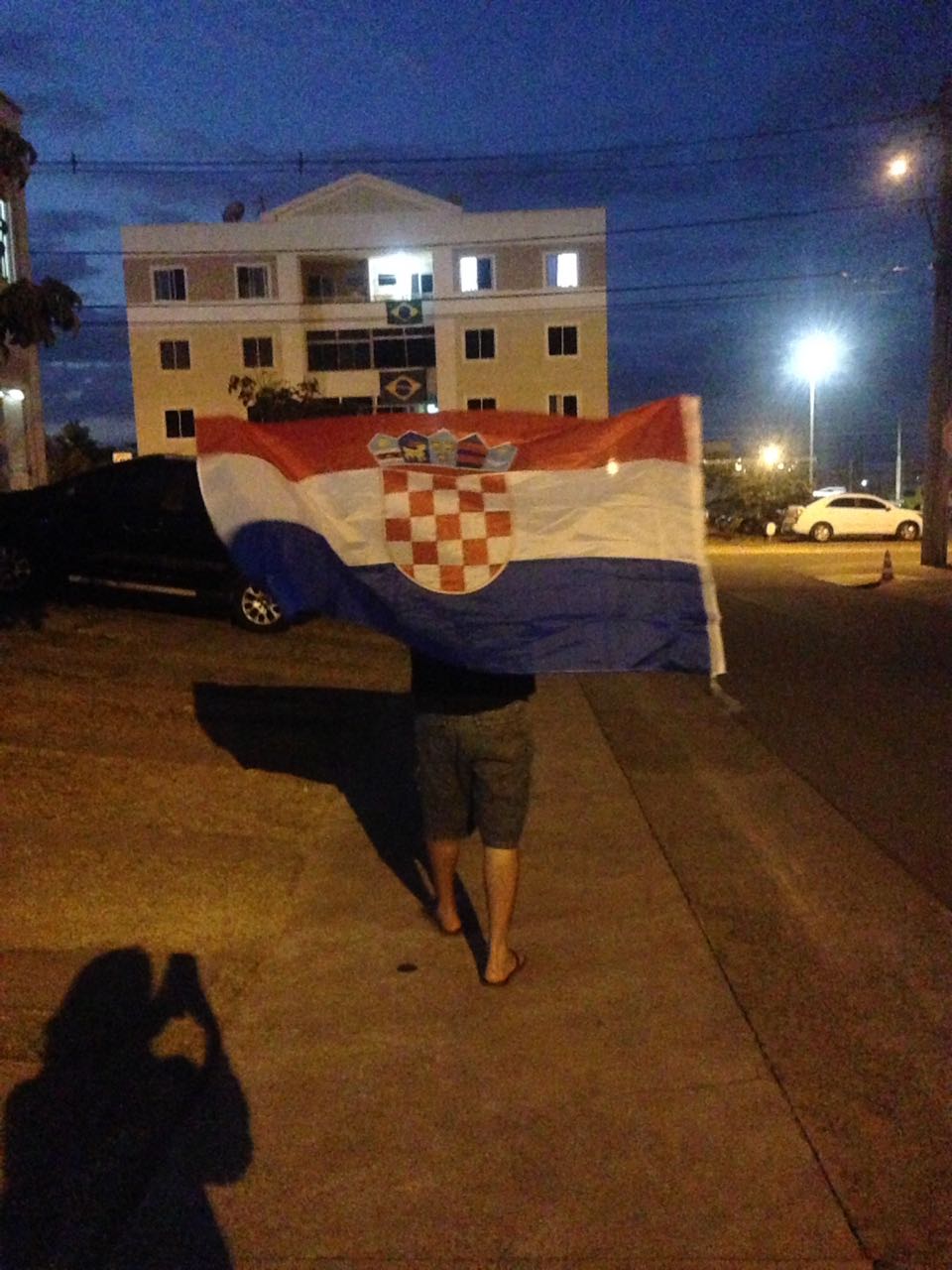 “Modric is indescribable to me, but my favorite player today is Rebic! Since 2014 he strives like never before and leaves all his love for Croatia on the pitch! He is incredible! It will be the future of Croatia.”

“I know everything about Croatia, I have lived the country intensely in all my life, since its history on all the sports of the country. I follow all the players in all leagues. I am making predictions about the future Croatian players. For me, it is not news that Croatia could reach the final of the World Cup! I made a comment on the Croatian selection page saying that the 4 million inhabitants in Croatia were similar to the 300 of Sparta.”

The passionate fan says that Croatia has made him the happiest man in the world this World Cup. 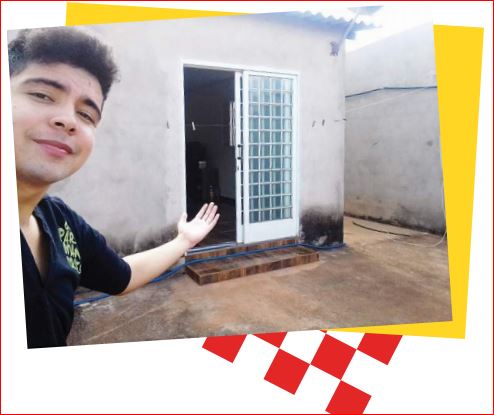 Francisco would swap his home for a Croatia win

“The victory over Argentina, the extra time! I am already proud and are moments that I will take for all my life! Before the World Cup started I said I would give my home up to see Croatia become World Champions! I will really do it! I’m going to make a tattoo of Croatia on me, it will be my first tattoo! If Croatia wins the World Cup on Sunday it will be the happiest day of my life! My biggest dream will be to watch a Croatian national team match at a stadium in Croatia,” he concluded. 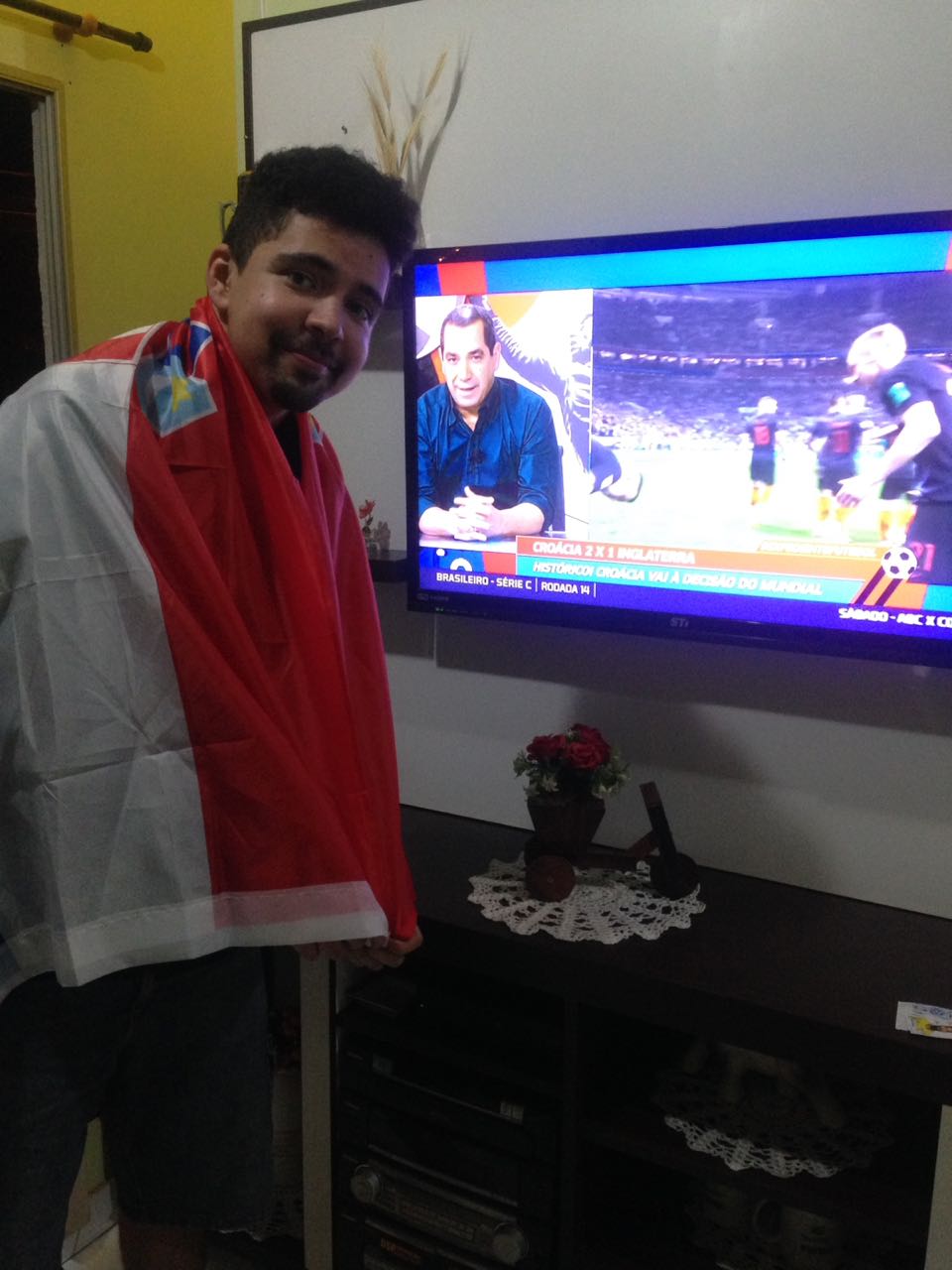 And his prediction for Sunday?

“Croatia will win the World Cup! I’m going to watch the game with my girlfriend who already became a Croatian from both talking about Croatia to her! Impossible not to fall in love with this wonderful country.” 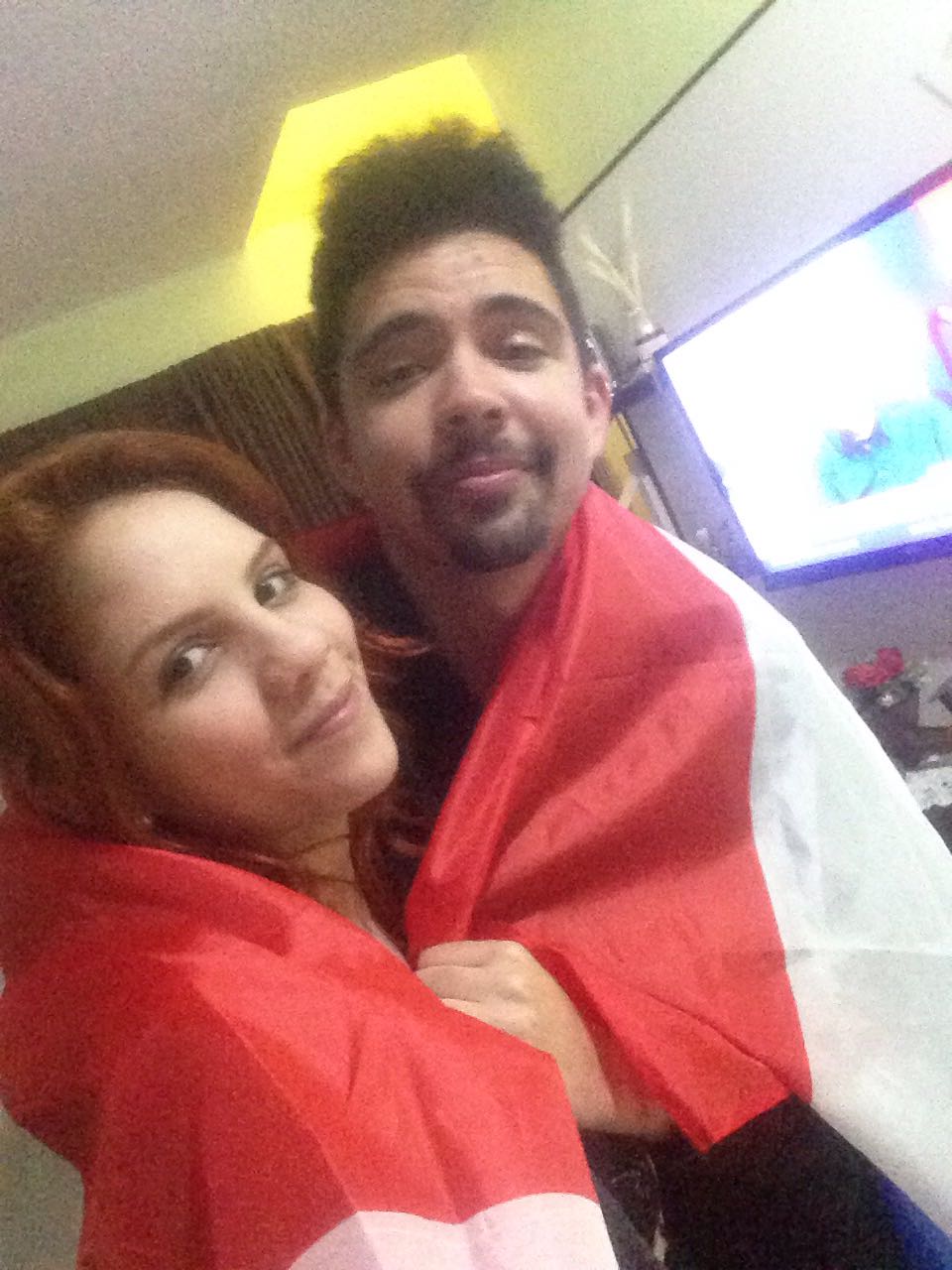 Francisco has converted his girlfriend into a Croatian fan (Private Album)