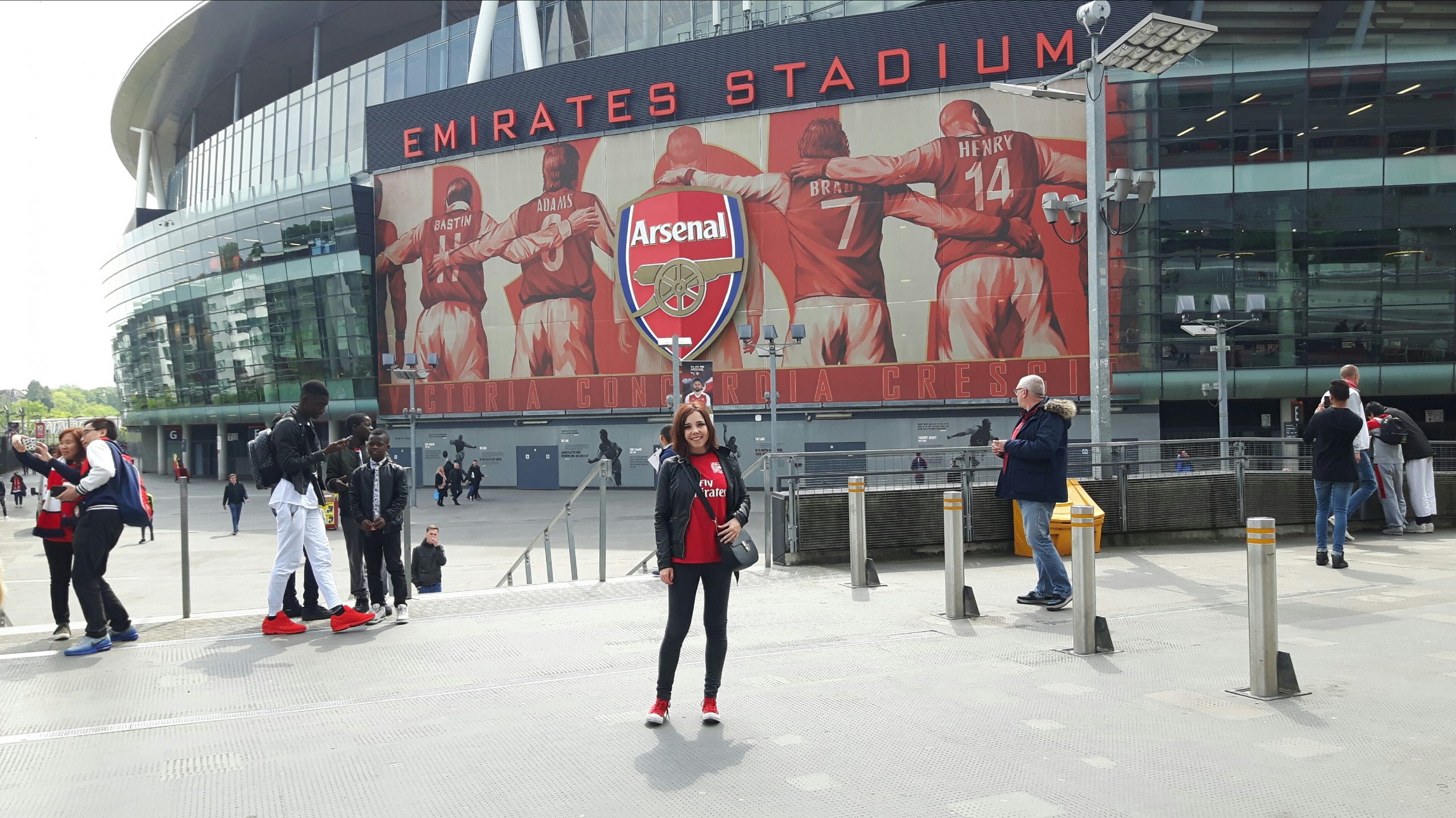 Anita Sambol Baniček outside the Emirates

There are not many more passionate supporters of English Premier League club Arsenal in Croatia than Anita Sambol Baniček.

Whenever Arsenal is playing, you will find Anita breaking the game down in ‘real-time’ from her handle ArsenaloFka on Twitter from home in the beautiful city of Varaždin, around 85 km outside the capital Zagreb.

From giving advice to coach Mikel Arteta and the players, to engaging in banter with the scores of Arsenal fans online, matchday evokes a passion in Anita for her club.

Anita, who turns 31 next month, grew up far away from North London in a small village called Bednja in Hrvatsko Zagorje, the same village Croatia and Hoffenheim striker Andrej Kramarić is from.

Football was always a big part of Anita’s childhood and a favourite pastime after school for both the boys and girls in her neighbourhood. In England, supporting a club is usually passed down from the father of the house, but in Anita’s case, a Spanish midfielder was partly to blame.

“I started supporting Arsenal in 2006 during their great run in the Champions League. I was a teenage girl with a crush on Cesc Fabregas but I fell in love with the club, its history, values and style of play, and Arsene Wenger of course,” Anita explains. 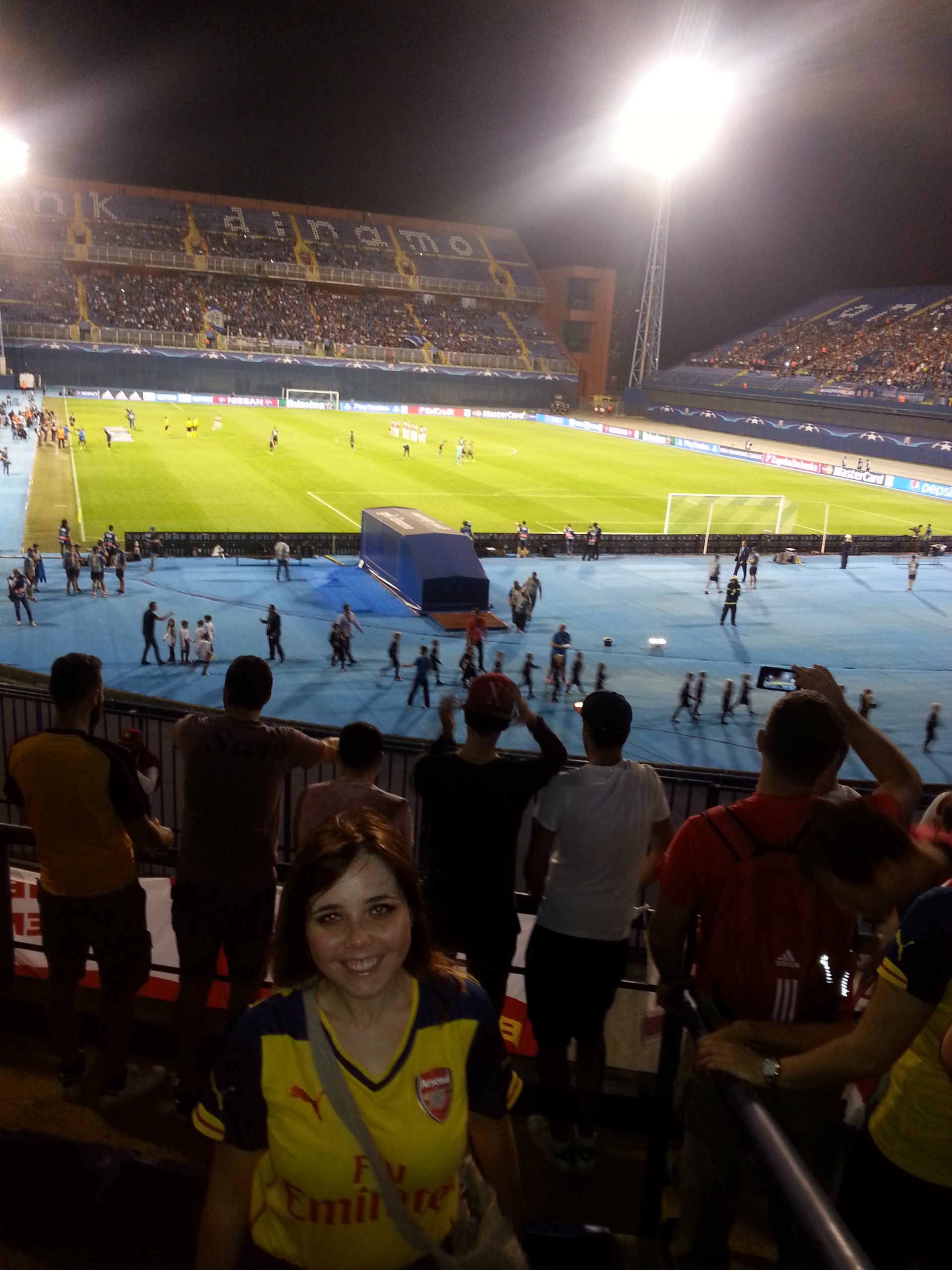 In Croatia there is an official supporters club – Arsenal Hrvatska – which is officially recognised by Arsenal FC. It originated on a forum where lots of Croatian Arsenal fans discussed the club matters.

“We used to organise trips to Austria when Arsenal were there during summer preparations so many people got to see the players up close. There were also organised trips to European away matches close to Croatia, like Milan and Munich for example. Also a fan tournament at the Emirates Stadium, plus a big gathering was organised when Arsenal were playing Dinamo in Zagreb a few years ago, all thanks to our president Martina,”says Anita.

Anita also uses her talents to create Arsenal-related graphics, which were even used by a first-team player at the club.

“I got interested in that back in high school and actually taught myself how to work in Photoshop. On Twitter I met Lee Hurley, owner of one of the biggest Arsenal news sites/blogs the Daily Cannon, who gave me a chance to share my graphics with the whole world, and got me where I am today. Besides desktop and phone wallpapers, I created social media graphics, posters, fixture lists, calendars, t-shirts. I even got some comments from Arsenal players, and Calum Chambers actually used one of my graphics as his Twitter header for a while. I stopped doing these regularly but am a regular guest on the Daily Cannon Podcast,” Anita reveals.

Whenever Arsenal plays rivals Manchester United, Anita’s tension levels rise just that notch higher. Sitting next to her on the couch is husband Nikola, who happens to be a big Manchester United fan. 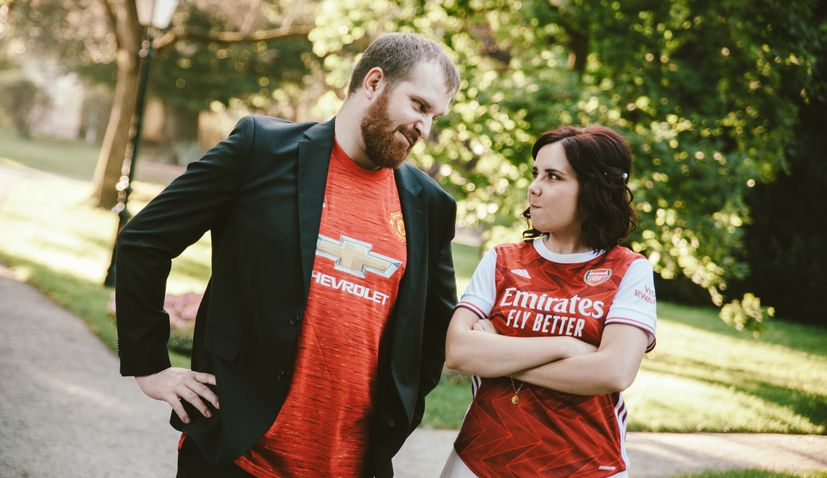 Nikola (30) is originally from Koprivnica but went to college in Varaždin where the married couple now reside.

“I started playing football with my neighbours as a kid and never stopped being interested and been passionate since. I’ve played for amateur club youth teams since I was 8-9 until I was 16-17. I played as a full-back and central defender. Now I play 5-a-side with a couple of work friends a couple times a week but it’s all casual and nothing competitive,” Nikola says.

So what is it like in the house when Arsenal plays Manchester United?

“It’s intense but friendly. We don’t do bets since Nikola lost too many already haha. During the match it gets heated and there might be some silent treatment afterwards but we’ve been through a lot and don’t stay mad for a long time,” Anita joking explains.

Nikola, who proposed to Anita just one hour before kickoff when Arsenal and Man United met last year, jokingly adds that whatever the result it can be tough for him.

“It’s tough, if Man United lose, I usually go play some video games until I cool off or if Arsenal losses, I go away until she cools off, haha. No bets, I’ve learned that the hard way (once I had to wear Arsenal kit in public for a week). My favourite defeat so far was when Arsenal won 2:0 last year just after I proposed,” says Nikola.

Whilst some might think a draw is the best result to hope for when the two sides meet, Anita and Nikola disagree.

“I’d say its best when Arsenal win cause then I’m in a good mood and Nikola pretends he doesn’t care so its happy day,” Anita jokes.

“The best result is when your team wins, it would be better if a draw wasn’t an option She can’t be reasoned with and is very biased when it comes to Arsenal. I also have my own downsides but usually I just give the silent treatment. We both need some time to deal with a defeat, but at the end of the day it doesn’t really matter that much,” adds Nikola.

Anita and Nikola went to the Emirates stadium together back in 2017 to watch Arsenal and Man United play. It was a day Anita particularly enjoyed as Arsenal won 2-1. 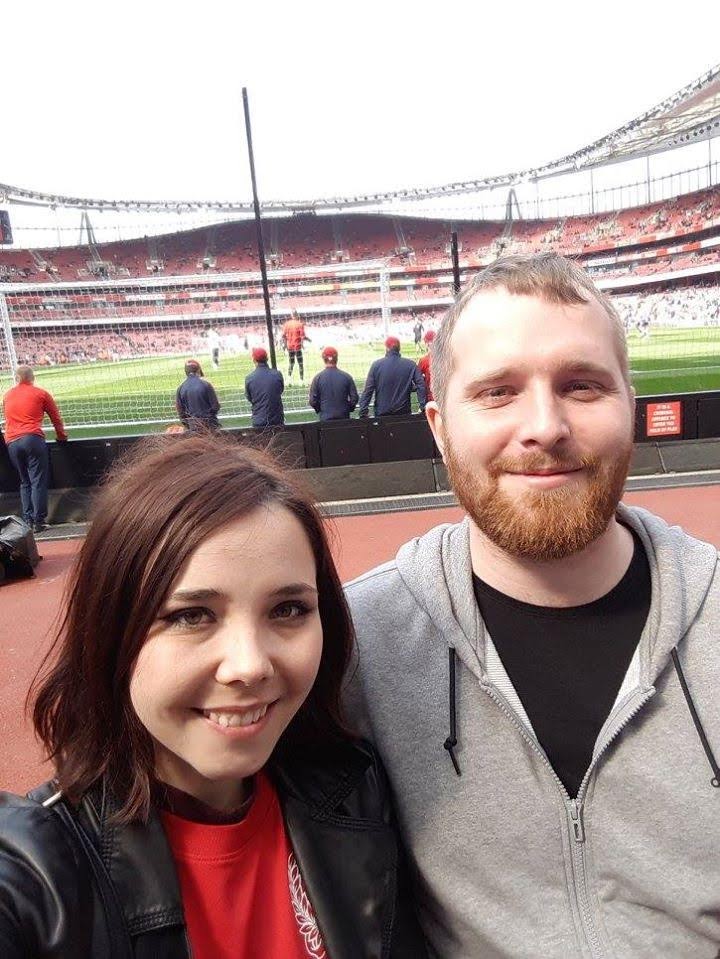 Anita and Nikola at the Emirates

The couple also went to the home of Nikola’s club, Old Trafford, back in 2019 to watch Man United beat West Ham 2-1.

But the most memorable match the couple say that they have watched live together was the 2018 World Cup Final in Moscow when Croatia played France.

“Thanks to Anita we actually got to watch the World Cup final in Moscow, which Croatia unfortunately lost. She’s working with the FIFA Fan Movement that made this dream of ours happen and I’m very lucky to have married her. That was probably the biggest adventure we’ve had,” Nikola, who is also a big fan of Croatian club Slaven Belupo, said. 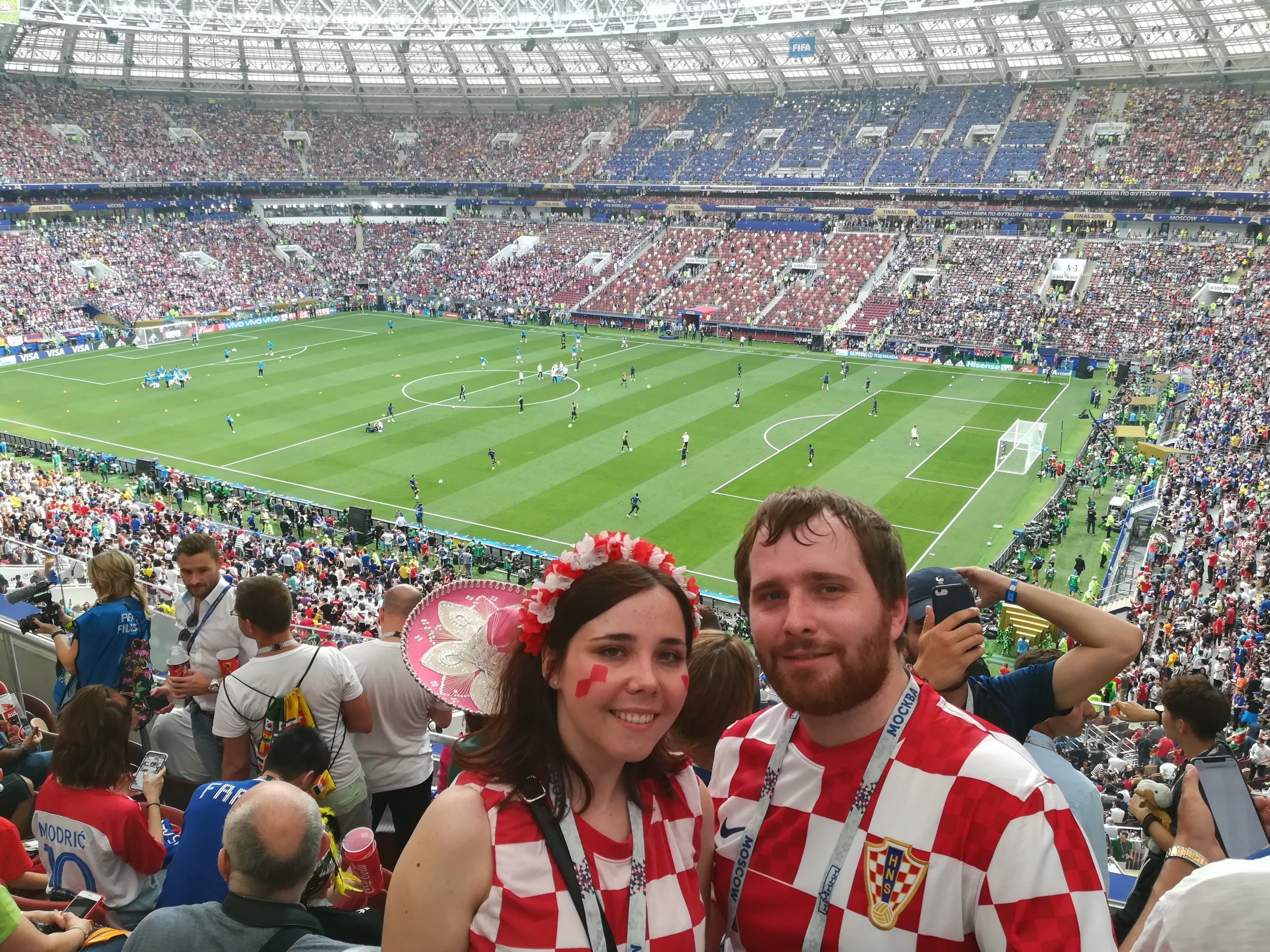 Whenever the couple go away to international games, Nikola always make sure to wear his Slaven Belupo kit around the town.

“It’s not as recognisable as the Croatian home kit, but it’s always nice when someone recognises it and greets us. I remember Slaven Belupo playing in the Croatian Cup final and I couldn’t get my hands on a ticket so me and a couple of friends found a small wall that is near the stadium and watched the game from there. We couldn’t really see much, but it was a great experience just being there, witnessing the first cup final in the club’s history.” 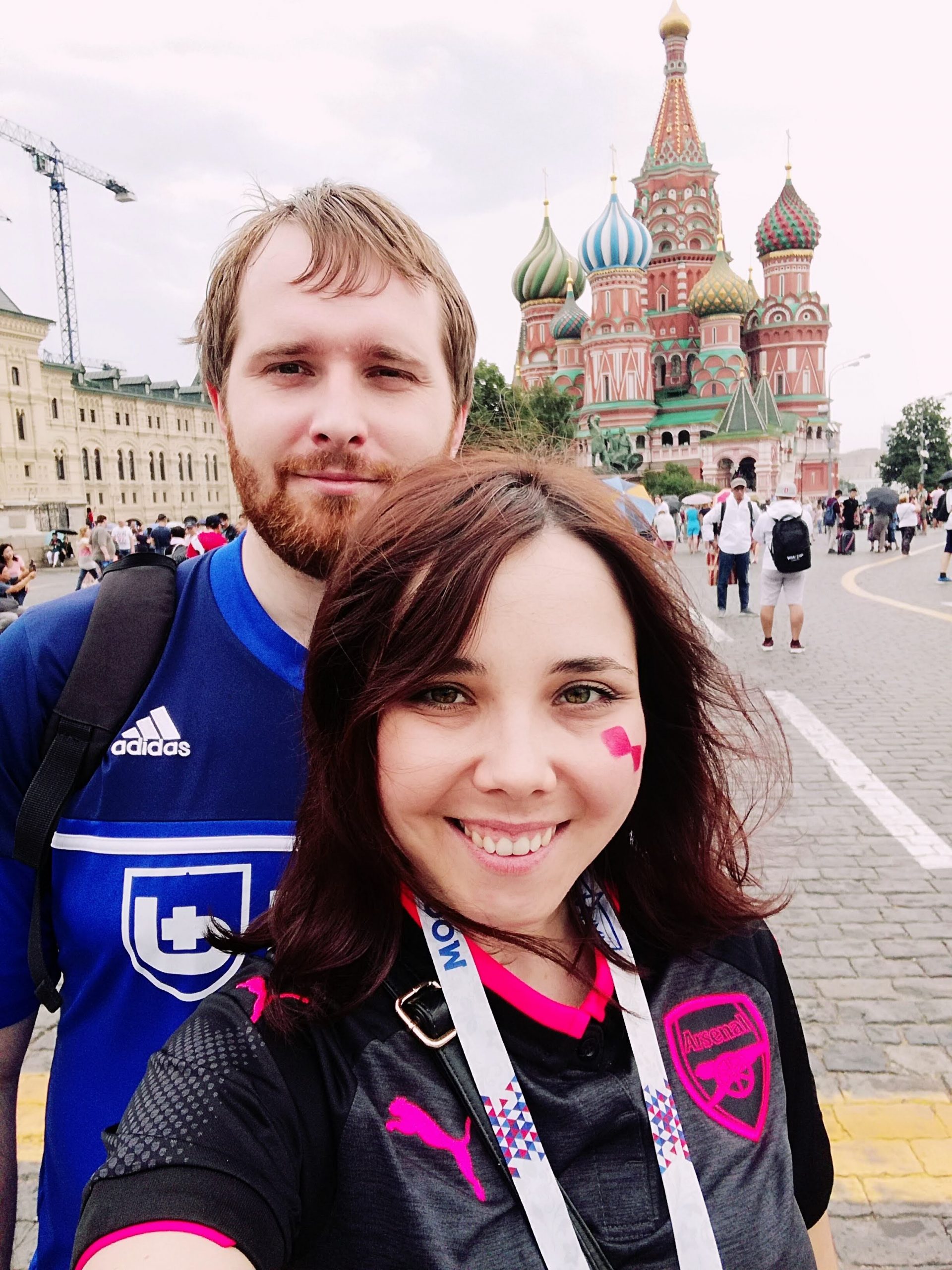 Anita says that in Croatia she follows her local team NK Varaždin and will go and watch them play when she can during the season. Her favourite all-time Croatian player is former captain Zvonimir Boban, whilst from the current squad, she likes her fellow villager Andrej Kramarić.

“For Arsenal, it is a tough one. I don’t have a clear favourite to be honest, Henry and Bergkamp are generational talents but I only got to see them for a bit when I started following Arsenal but I’d pick them as favourites due to all they’ve done. Perhaps Ramsey or Santi Cazorla from the Emirates era,” Anita says.

“This is a tough question, because there were so many great players. Growing up it was David Beckham because I admired his free-kicks and crosses and wanted to be as skilled as him. But, since I’ve started following the club, I’d say my top five are Scholes, Giggs, Rooney, C. Ronaldo and Ferdinand. I don’t think any of the recent players, except Rashford have come close to even challenging for a place in top 10,” Nikola says. 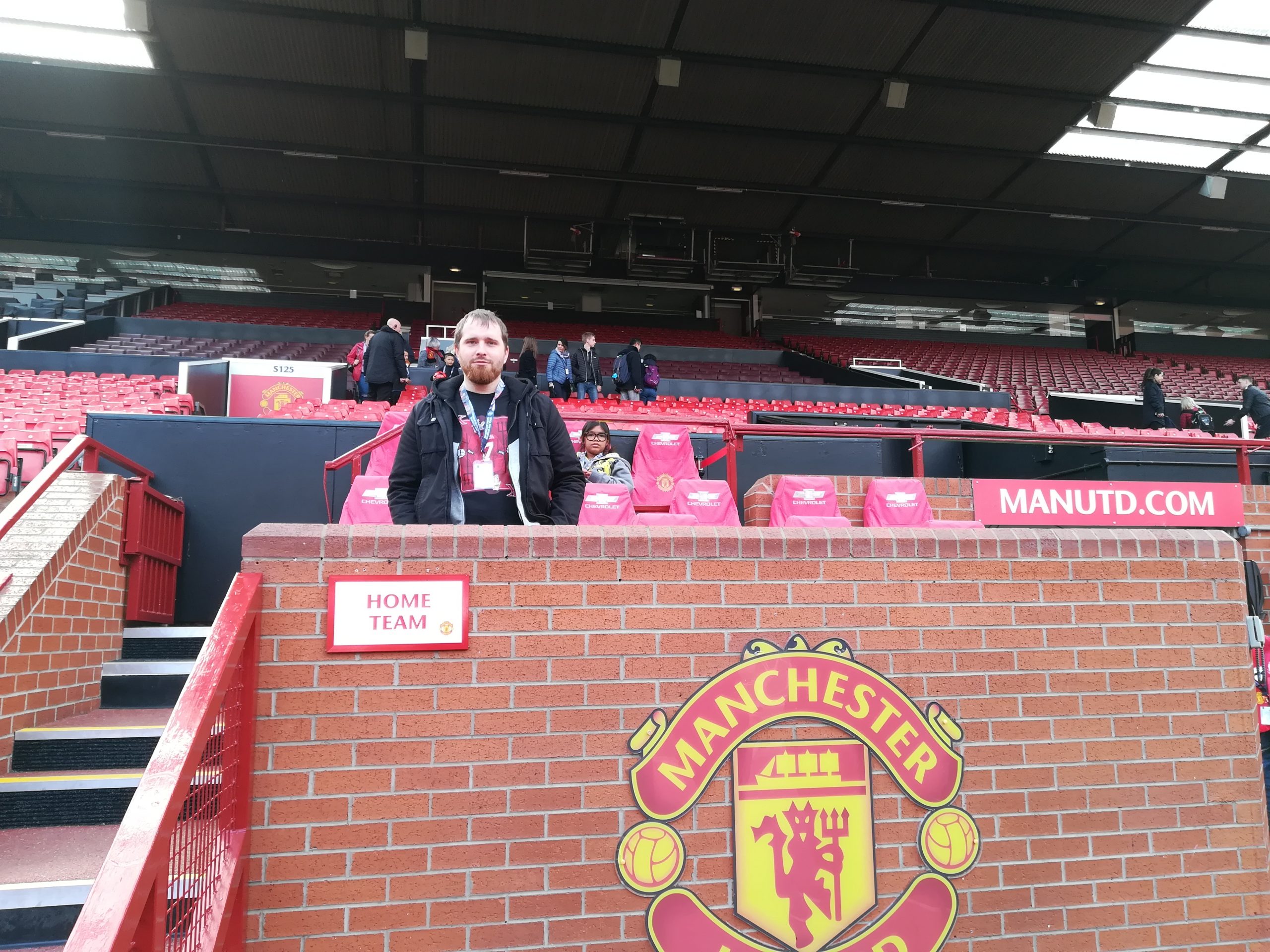 Nikola in the dug out at Old Trafford

Away from football, Anita works in a marketing agency and enjoys to cook and watch true crime documentaries on Netflix.

“I usually play video games, watch anime, an occasional home project here and there is also nice. Together, we often take walks around town, watch movies and stuff,” Nikola concludes. 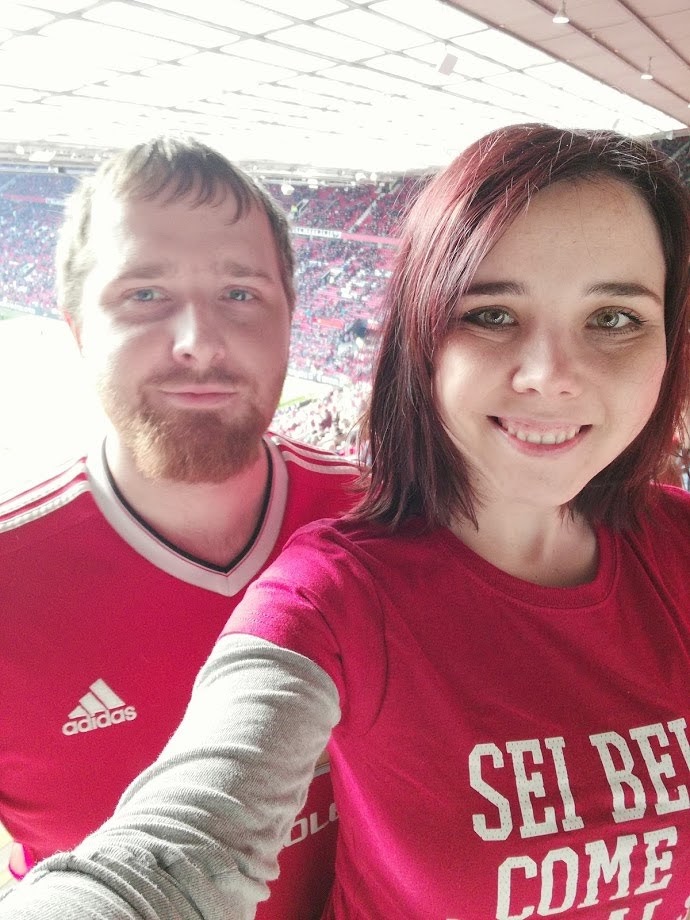