29-year-old Lovre Štavun from the Dalmatian city of Zadar is perhaps one of the few people in Croatia who can claim that. The Japanophile is putting his skills to use and recently he became the first formally schooled tour guide in the Japanese language in the Zadar county and one of the very few Japanese-speaking tour guides in Croatia.

We spoke to Lovre, who told us how he learnt the language, what Japanese tourists are interested in Croatia and the potential between the two countries.

So Lovre, how does one decide to start learning Japanese?

I have been interested in learning languages from the very young age. I started learning English by ear around when I was 3 years old. Afterwards, I went through the formal education and continued studying the language by myself, whenever time allowed me to. When I was 10, I was introduced to Japanese animation and along with that, to Japanese language. The language sounded very familiar to me, almost as if it’s a part of me that I somehow forgot… I started learning by myself intensively when I was 18 and have never looked back. Occasionally, there were even 10-12 hours seances where I would become completely engrossed with this new language that I was just setting out to study. Right now, I am quite fluent in it, but there is always room for improvement, naturally.

How difficult was Japanese to learn?
It was hard at first. I remember times where I would sit and look at the characters that would cause me to have a slight migraine, but I would not give up. You wait out the headache and carry on. Breaking your own barriers is the way to success.

Do you have any secrets/tips for those struggling with a new language?

Love what you study and study what you love. Make it your own and be proud of whatever you already know. That way you can get better at it and keep the self-motivation running for years and years to come.

Do you speak any other languages?

I do. I speak Croatian as my native language (I even studied Croatian language and literature in college), I speak English as my second language and Japanese as my third. I also passively understand Romance languages, Italian and Spanish, but I never took time to study them in-depth. My policy is not to be a “jack of all trades, master of none.”

How did you get into becoming a tour guide?

It came naturally to me. I’m a social person – I love people and I love interacting with people. I have a lot of patience and understanding for people and other cultures, so it came as a natural progression to me. Another thing that prompted me into taking the course to become a certified tour guide was my love for nature and the notion of how much nature Croatia has to offer, along with, of course, rich history. If I can be the storyteller, the promoter of our cultural heritage, I will gladly take that role upon myself.

Are you the first and only Japanese tour guide in Croatia?

I’m sure there were others that came before me, but if we rephrase that to “Am I the first and only formally schooled tour guide for the Japanese language in the Zadar county?”, then the answer would be “yes.”. That being said, the number of the tour guides in Japanese language in Croatia is extremely low, compared to other languages offered.

Have you had the opportunity to guide many Japanese tourist groups yet?

Sadly, the formal study course I took in order to become a certified tour guide took a bit longer than expected due to various circumstances, but I did manage to finish it in September this year. The course began in March and it required me to master 17 subjects such as Art history, Croatian history, Geography, Politics, Economy, Foreign languages (in my case, English and Japanese language) etc. It was a very rigorous course through which I’ve learned what is expected of me as a tour guide along with learning a plethora of new information about the city, the county and the country I live in. This year, however, I did get to do two tour guides in city of Zadar – one in September and one in October. My first two guiding experiences were with Japanese tourists in Japanese language. It was a thrilling experience and I’m looking forward to be doing more tour guiding in the upcoming year. 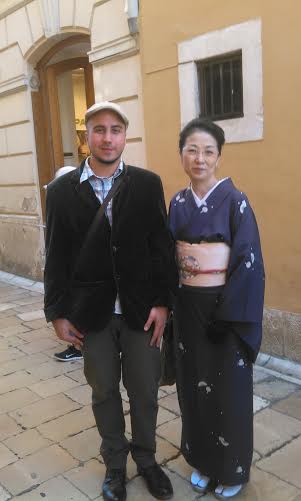 Lovre with a Japanese tourist in Croatia

What are the Japanese particularly interested in Croatia when they visit?

Japanese people are cultural tourists and ecotourists. They want to know the history of the place they’ve visited. They want to see the beautiful, untouched nature. They want to be told a fairy tale based on reality and that is exactly what Croatia has to offer with its preserved nature and a rich historical background. Dubrovnik and Plitvička jezera are the two places that they are familiar with, but Zadar has to offer so much for a reasonable price, that it would be a real shame for Japanese tourists not to see everything that it has to offer. Starting with the bastions and the city walls surrounding the old town, old roman forum remains, many historically important churches for Croatia lie here, rows of charming houses and the tasty local cuisine in the middle of the city… It’s an experience you will want to repeat again and again, learning something new every time you decide to come and visit.

What makes them different tourists to other tourists say from Europe?

Japanese people are firm believers in quality over quantity. They will gladly part with their hard-earned money for a Croatian brand, a locally produced item or even a nationally recognized item if it’s something that will offer them a chance to experience something new and different… or even better, something that is recognizable by its historical and social value here in Croatia.

Do you think there is big potential between Japan and Croatia for business/tourism?

I do. Starting with Croatia (more precisely Zadar, and the village of Kali on the island of Ugljan in the vicinity of Zadar) being one of the most important import countries of tuna for Japan, there are many similar points that we share as countries, which might not be so obvious at a first glance. Both countries pride themselves on its long history and the preservation on nature, and in that sense, there is always room for joint projects and bonding over them. One thing that saddens me is the lack of formal education of the Japanese language here in Croatia.

Lastly, I would like to give my thanks to Croatia Week for taking interest in my journey as a tour guide and a linguist/Japanophile. I have not yet visited Japan itself, but if I were to be given a chance to do so, I would gladly take such an opportunity. I would be able to improve and solidify my knowledge of Japanese language and culture, which would, in turn, help create a better promotion for Croatia and everything it has to offer. I also invite every one of your readers to come visit Zadar in the near future and see for themselves the beauty of the nature and history coming together in one single city.