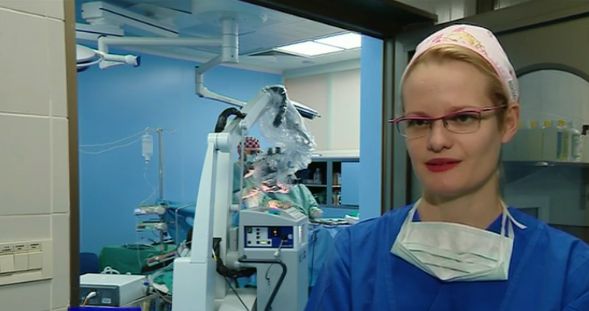 Croatia has its first female neurosurgeon. That title belongs to 33-year-old Nikolina Sesar, who passed her specialization exam this month…

Originally from Zadar, Nikolina is the first female in the country to operates alongside fellow neurosurgeons, and has already carried out a brain tumor operation. Nikolina, who works at the Sisters of Charity hospital in Zagreb, says that she is particularly interested in the treatment of brain tumors and epilepsy.

“I have to thank Dr. Krešimir Rotim who seven years ago recognised my capabilities and help me get to where I am today. I will stay working at the Sisters of Charity hospital in Zagreb because my colleagues there are part of my success,” Nikolina says.

Nikolina has assisted in operations in some of the world’s elite clinics and is one of the few who have passed all four of the courses of neurosurgical societies in Europe. She also speaks five foreign languages – Croatian, French, Spanish, English and Portuguese – and in her spare time likes to paint.

“She has shown that everything we invested in her during her studies and specialization she has returned in an excellent way and I think she will be, which she already is, a great neurosurgeon,” said Rotim.

The title of the only female neurosurgeon maybe short-lived as there are currently seven women in Croatia studying to become neurosurgeons.