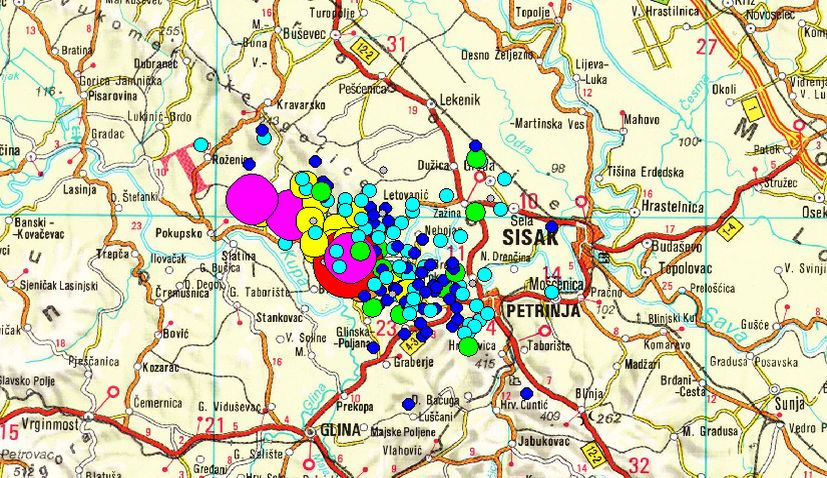 ZAGREB, 6 January (Hina) – Croatia’s Seismological Survey registered an earthquake at 6.01 p.m. on Wednesday measuring 5.0 on the Richter scale with the epicentre near Petrinja, 45 km southeast of Zagreb.

The tremor was felt in central Croatia, including in the capital Zagreb and in neighbouring countries.

Several buildings have been damaged and teams are inspecting the area. There is no information about victims as yet, earthquake task force spokesman Mladen Pavic said.

Speaking to Hina, he said further damage to buildings damaged in last Tuesday’s 6.2 tremor was to be expected given the magnitude and 10-second duration of today’s quake.

Medved: Teams are on the ground again

After tonight’s tremor, the head of earthquake task force, Tomo Medved, tweeted that all teams were on the ground again “to check if anyone has been injured and what the new damage is. Unfortunately, this also means that structural engineers must again inspect the buildings they have already inspected.”

Seismologist Tomislav Fiket told Croatian Television tonight’s tremor was one of the aftershocks of the “devastating earthquake of 29 December.”

The tremor was felt in central Croatia, including in the capital.

On 29 December, Petrinja was hit with a 6.2 magnitude earthquake and today’s shake was the strongest since then.

The previous two strongest were recorded the day after on 30 December when 4.7 and 4.8 magnitude earthquakes hit.

Seismologists warned after last week’s 6.2 magnitude earthquake that aftershocks measuring above 5 on the Richter scale could be expected.