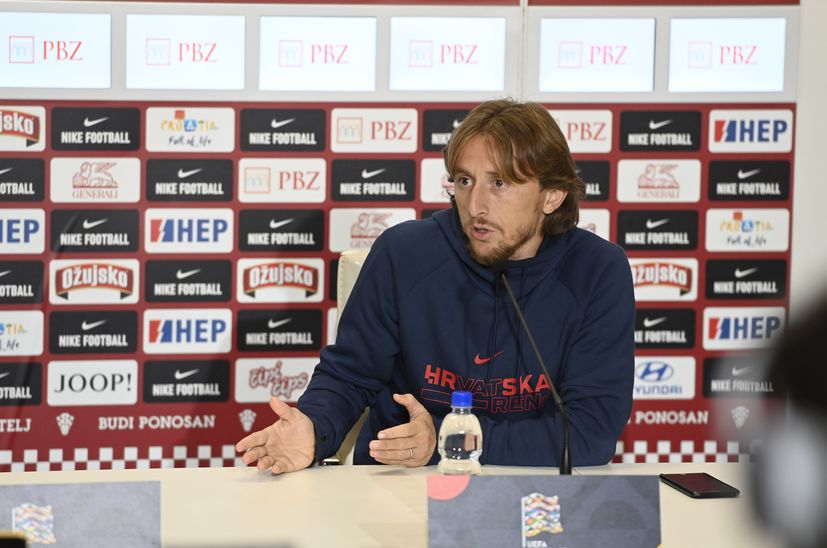 Luka Modrić talks to the press on Monday in Split (Photo: HNS)

Croatia needs a positive result against the European Champions to remain in the elite group and will need to find motivation after a disappointing loss to Sweden on Saturday night.

“Just playing for the national team is a sufficient motive. Plus, if we can’t find motivation for Portugal, we shouldn’t be here. We are aware of what kind of opponent awaits us. If we are at the maximum of our capabilities, we can do it. The first half against Sweden was very bad, and tomorrow we will try to play the best game possible, to play without any pressure and enjoy the match. Too bad there are no fans because it was great the last here against the Hungarians. But, I believe that we will play a great game this time as well,” said Luka Modrić.

Portugal is one of the strongest teams in the world

Portugal is a great team, they have a lot of young, good, and talented players with a few more experienced ones like Pepe and Cristiano who play at a high level and help the younger ones to take on those roles in the future. Portugal is one of the strongest teams in the world, regardless of the fact that they cannot defend their Nations League title.

How much of an advantage is Poljud for Croatia without fans?

It is difficult to say that it will be a great advantage. When you play without fans, no team has an exceptional advantage. I don’t believe there will be any big advantage to playing without fans. It would be much better with them.

There are problems in defence, but also problems in the defensive midfielder spot. Did you talk about that with coach Dalić?

I talk to the coach, but that’s not our biggest problem. We have to be as a whole, as a team in every segment strong together. We play well without the last midfielder. However, there are such matches in which you are not at the right level. The playing roster rotates, trying to find new solutions, new players he can count on in the future. It is normal to have oscillations in these games. How Croatia played against Sweden is not its true face. In my opinion, the second half against France is more of a true face. How Croatia can and knows how to play. But when the playing roster rotates to see who it can count on, then you can’t be at the highest level in every match. When we are all together, Croatia will be powerful again. I firmly believe in that.

Tomorrow night with be Modrić’s 133rd appearance for Croatia. How is he feeling?

I feel good physically, I am better when I play more games in a row. I am ready and I will show it against Portugal.

Where does his energy come from?

I enjoy football, football is my life. I feel good. I know it won’t last long, I’m not at the beginning of my career and I want to enjoy every game, every workout. Ronaldo and I have done a lot, but you don’t want to relax and say “I don’t need to work anymore”. All successes additionally motivate you to stay at that level as long as possible.

Modrić also caught up with his former teammate Ronaldo after the Portuguese training.

I’m glad Ronaldo and I saw each other after a long time and talked about everything. We have fond memories. We remembered the time from Real, a simple conversation between two friends, not to go into too much detail

In the end, a question about Croatian stadiums.

We simply do not have a stadium like other European countries have. But I enjoy playing at Maksimir, Poljud, Osijek or Rijeka when the stadium is full. What will happen in the future, whether a solution will come, whether Poljud or Maksimir will be renovated or a new one will be built, it does not make sense to enter into these topics. But Croatia definitely deserves better stadiums, especially football ones.

Basketball arenas are being built, I don’t know what is not being built so why can’t there be some help to make a better stadium. Football has promoted Croatia so much that it would be nice to do it. I hope that at least future generations will have that luck and play in such conditions which we have not played in. When the stadium is full, you forget about all that and it’s a pleasure to play – Modrić concluded.