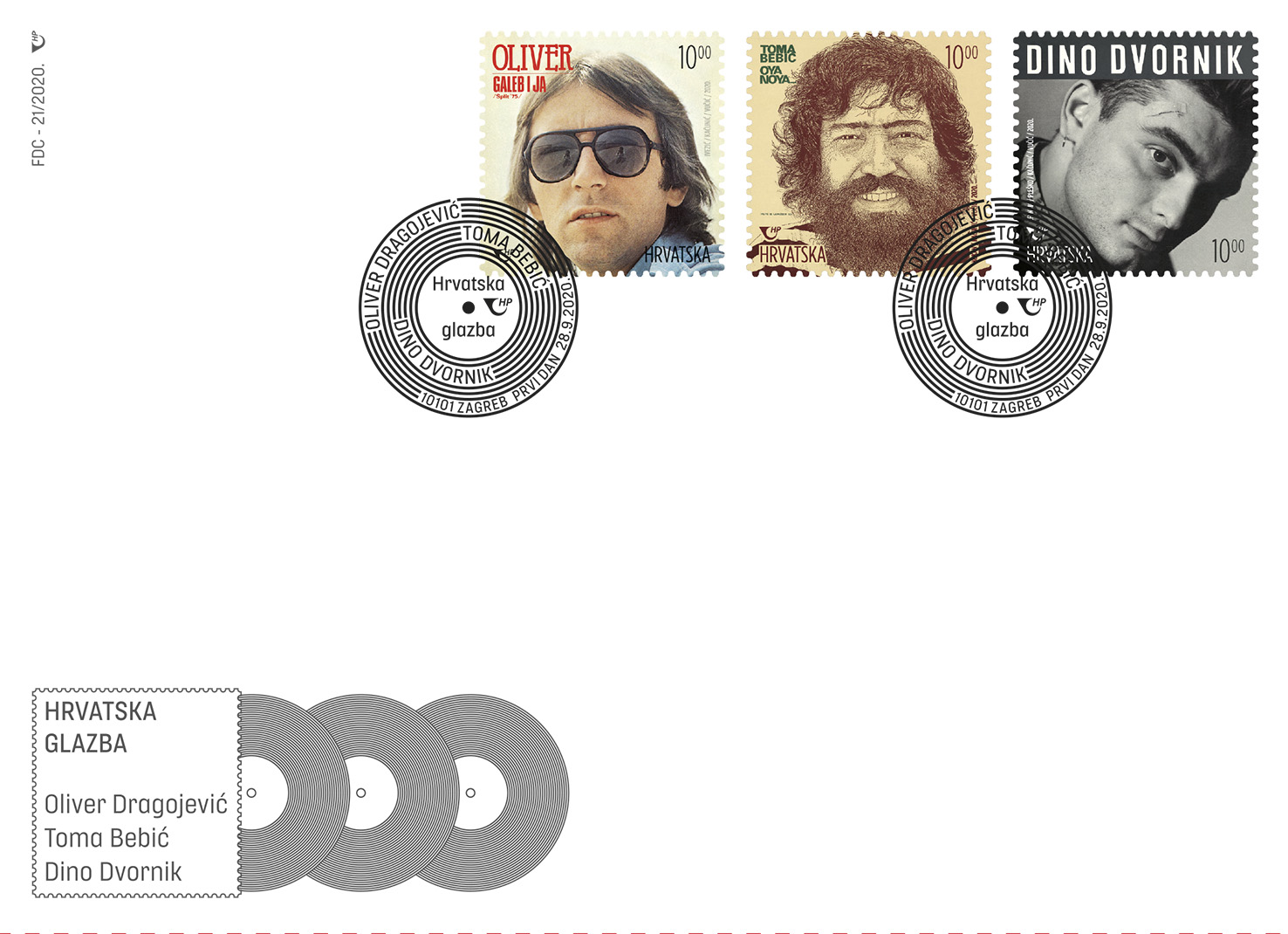 The motifs on the stamps show reproductions of the most famous editions of gramophone records by Dino Dvornik, Oliver Dragojević and Tomo Bebić. The authors of the commemorative postage stamps are Ivana Vučić and Tomislav-Jurica Kaćunić, designers from Zagreb.

The nominal value of the stamp is the same for each motif and amounts to HRK 10.00. The stamps were printed in a circulation of 100,000 copies per motif, of which 1,000 sheets were in the corresponding numbered cases. The commemorative stamps were printed in sheets with four self-adhesive stamps, and Croatian Post also issued a commemorative First Day Cover (FDC). Round arches imitate a gramophone record.

Dino Dvornik’s musical legacy, as well as his private and entertainment life, which are permanently intertwined, testify to the enormous talent and eruptive music in which, regardless of the scale of inspiration, basically always a furious rhythm and passion. 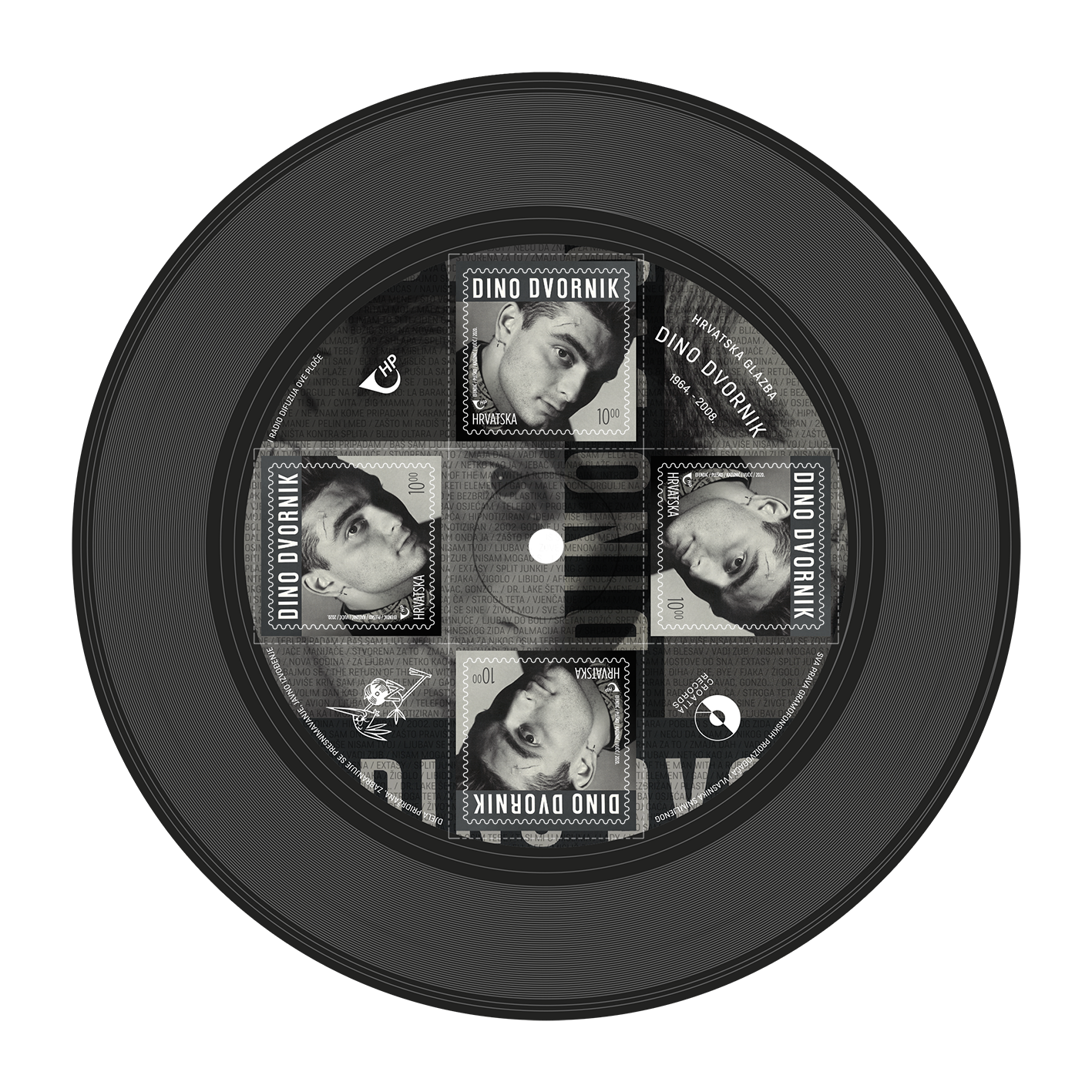 It was obvious when he released his debut album in 1989, which gave the megahit “Zašto praviš slona od mene”, one of the biggest – but also the best – hits from the late eighties. With it, Dino announced that funk is neither a teenage infection nor a fashionable trendy “trick”, but a pure and unadulterated passion. This was also shown by the following projects, such as the album Kreativni nered, released a year later, with exceptional compositions such as “Udri jače manijače”, which is at the very top of the Croatian songbook of the 1990s.

If the war years and the drastic cutting of the former market deprived Dino of huge circulations and sold-out tours, they certainly did not affect his creativity. On the album Priroda i društvo released in 1993, he stepped towards more serious topics but also showed that he is equally capable of composing flawless R’n’B-pop stylizations and successfully and pioneeringly experimenting with techno/house rhythms, which are almost ubiquitous on the album. At a time when the domestic scene was leaning towards dance, in 1995 he released Afrika, one of the best, but also the most influential numbers of Croatian music in the 1990s, and two years later the exceptional album Enfant Terrible. He remained on the trail of funk until the end and the album Pandorina kutija, which was released posthumously immediately after the premature departure of the Croatian uncrowned “king of funk”.

Oliver Dragojević is a singer who, just like Frank Sinatra, deserved to be called “The Voice”. Also known as the “cosmic Dalmatian”, the father, son and holy spirit of Dalmatian song and “southern consolation”, which he long ago patented with his emotional vocal “rasp”, Oliver was certainly the best singer among musicians and the best musician among singers. A multi-instrumentalist and a great keyboardist in his long career, he has gone from rock and pop to pop music and jazzy stylization. Giving his voice and soul to the numerous eternal melodies of the Split Festival written by Zdenko Runjić, in the 1990s he opened a new lucrative period and career with “Cesarica” by collaborating with many young composers.

While in the seventies and eighties he was a cult “Dalmatian singer” with anthemic and anthological compositions such as “Galeb”, “Malinkonija”, “Oprosti mi pape”, “Skalinada”, “Karoca”, “Ništa nova”, “Stine” and others, and with a range far greater than regional borders, in the 1990s and the new millennium he became the biggest and brightest star (not only) of the Croatian scene. 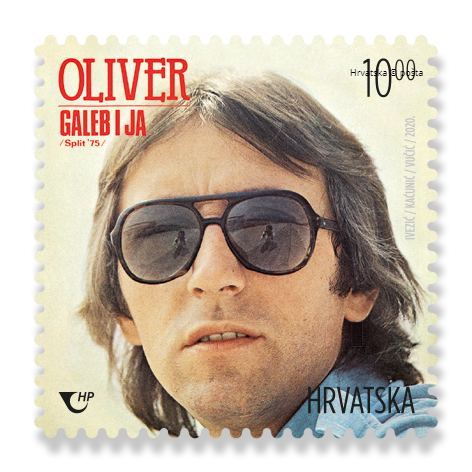 Moreover, great ballads typical of opus in the 2000s were given a unique emotional timbre by collaborating successfully with composers and musicians from other genre niches whom – just like Ray Charles, Wonder or Cocciante – he experienced as brothers in the same passion, inspiration and musical inclinations. The result is songs that, presented at the world’s most important concert addresses, make the grand finale of a brilliant career of a singer (and musician) who left eternal melodies for “until the end of time” with the unbearable ease of talent and musicality. As an epitaph and as a will.

Toma Bebić, aphorist, messy poet, a stubborn advocate of every alternative, even the author of picture books and books of twisted aphorisms, became a legend during his lifetime. 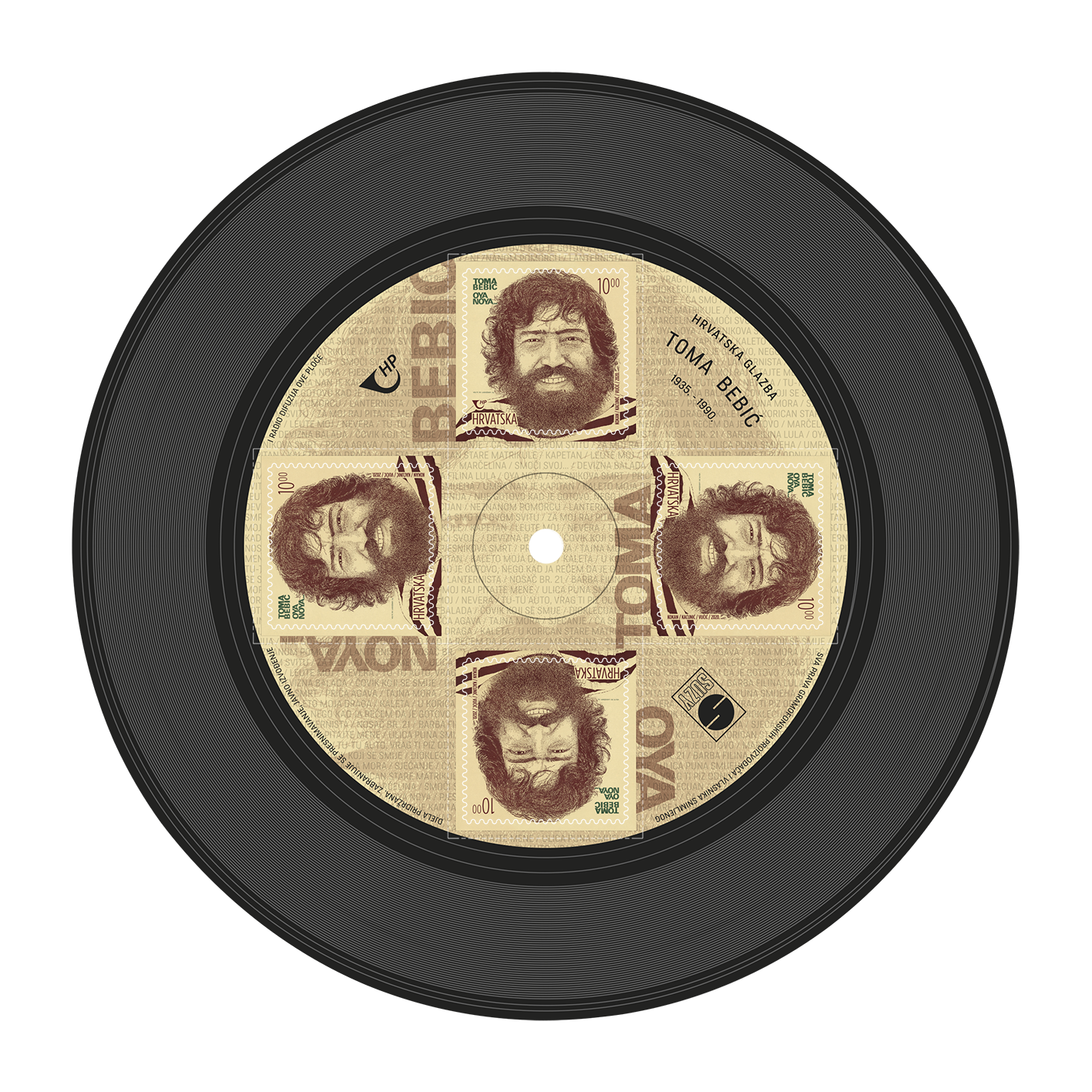 Admittedly, after his untimely death, he was left with a small discographic opus, but the influence of his key compositions was much, much greater. No wonder because Toma and his most famous songs like “Kaleta”, “Nevera”, “Oya Noya”, “Smoči svoj…”, “Ča smo na ovome svitu”, “Leute moj”, “Marceline” and others became almost anthems of both traditionalists and supporters of the festival alternative from Split’s Prokurative.

Unfortunately, partly due to his own negligence, and partly paying a tribute to “provinciality”, Toma’s discography is generally weaker than the value of the songs themselves and exceptional concert performances. 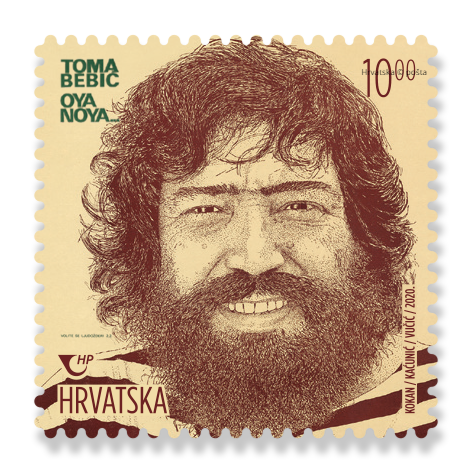 His compositions were mostly “Dalmatian chansons” with special dedications to the homeland, but before and after all they spoke about everyday situations and “little people”, marginals with whom – as a bohemian and an anarchist – he got along best. Singing in a hoarse and suggestive voice, they flashed on Oya Noy’s 1980 album, with the singer-songwriter hits “Nevera”, “Leute moj”, “Marčelina”, “Tu-tu auto, vrag ti piz… odnija”, “Za moj raj pitajte mene “… confirming Bebić’s role as a pop enfant terrible in the absolute deviation from the then Split-festival hit songs. Permanently interesting as a “messy” phenomenon of “Split studies” and a distinctive chansonnier, Toma was and remains a cult figure not only of the Split but also of the Croatian music scene.