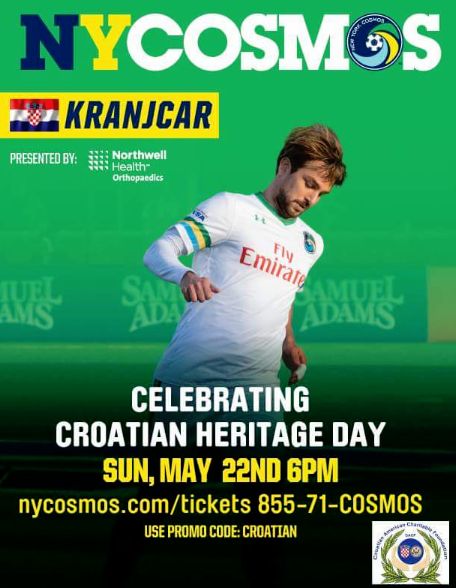 The New York Cosmos and NY/NJ/CT Croatian American community have teamed up to host “Croatian Heritage Day” for the NY Cosmos/Tampa Bay Rowdies match on Sunday May 22nd, 6pm at Shuart Stadium in Hempstead, NY. The NASL game will be broadcast nationally on One World Sports HD…

The legendary club has a long rich history of Croatians players. Mark Liveric, Tony Donlic, Fred Grgurev, Boris Bandov and Ivan Buljan all were key contributors for the club in the 1970’s and 80’s that won 5 NASL championships over a 10 year span. Liveric scored one of the most iconic goals in Cosmos/NASL history (see 19:55 mark of video)

In March of this year, the Cosmos continued this tradition by signing former Tottenham and Croatian National Team player Niko Kranjcar. Kranjcar has spoken glowingly about his time with the Cosmos — “I’ve said it from the first day, I love it here,” Kranjcar said. I think it’s a great team, a great soccer club. Yes, we would like to have more fans come in. We hope we’re going to get them in, especially for Croatian Heritage Night. I think there’s talent on the team and I’m really enjoying my time here.”

Events prior to the game will include organized pick up soccer games for young kids outside the stadium, exclusive parking lot for the Croatian fans for tailgating, DJ and traditional Croatian music during tailgating and the Astoria NY Kolo Group will be performing at the halftime show. Festivities will begin at 1pm by Gate C at the stadium.

It is estimated that there are over 120,000 Croatians that live within the NY-Tristate Area with an additional 50,000 that reside in the South Jersey-Philadelphia region. Tickets can be purchased by going to www.nycosmos.com and using the PROMO CODE CROATIAN. For further information about the event call (855) 71-COSMOS.