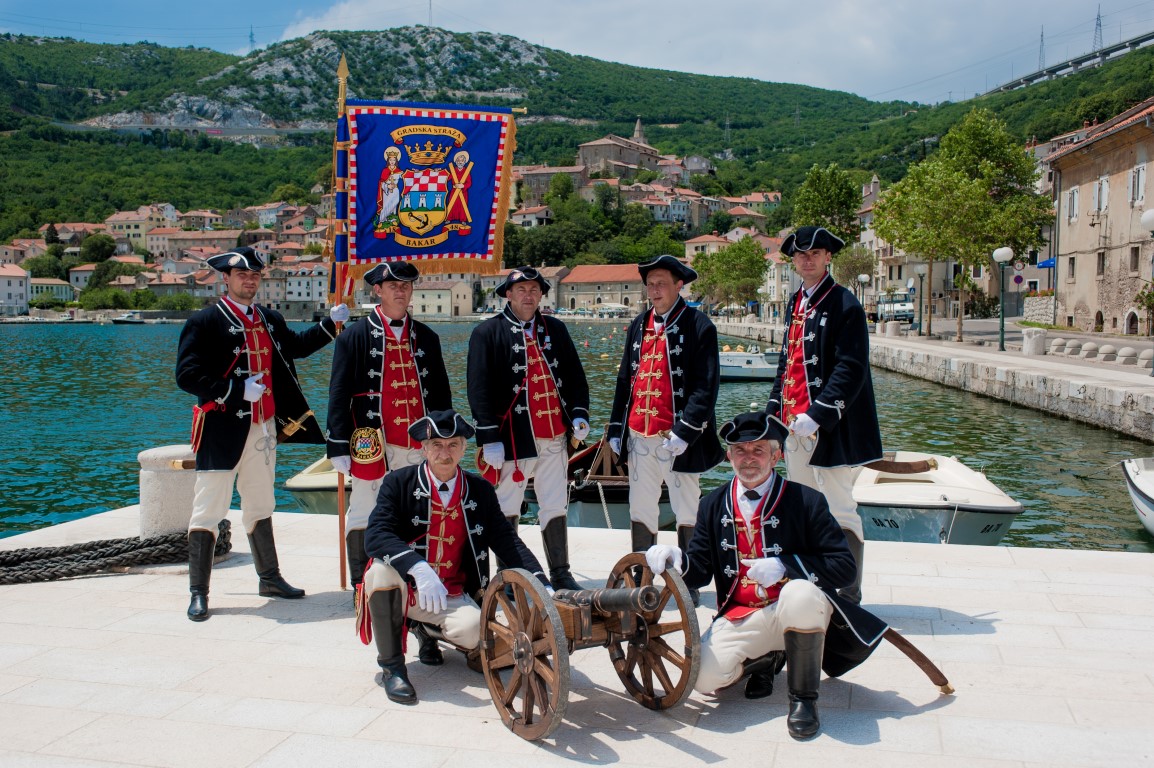 For 10 years now, in the reenactment of the legendary Naval Battle, members of the City Guard Bakar 1848 defend boldly, with their cannons, the city from Venetian sailors who, for the same number of years, have been trying to win it without success. Again this summer, on Saturday, 13 July, more than 15,000 visitors will descend to the Croatian town of Bakar to witness one of the most important events on Kvarner, and to enjoy a rich programme that will culminate in  spectacular fireworks over the Bay of Bakar.

Numerous important anniversaries marked 2019 in Bakar. Two among them are connected to the most important event of Margaret’s Summer and one of the most celebrated events on Kvarner, the Naval Battle. Ten years ago, the Bakar Tourist Board and the City of Bakar organized the first Naval Battle, with a wish to reconstruct it authentically, and to preserve in memory the famous victory over Venetians, who in 1616 had assaulted the city in their last attempt to conquer it.

In 2009, the City Guard Bakar 1848 was founded, an association which, due to its picturesque costumes and dedication to heritage preservation, became a distinctive symbol of Bakar. The Anniversary Naval Battle will take place on Saturday, 13 July, on the Day of the City of Bakar and its patron saint St. Margaret. For the first time, the event will be  commemorated with the procession of St. Margaret’s relic. The whole programme of the 10th Naval Battle brings a lot of fun and excitement, especially at the Small Naval Battle – a programme for children that has in store some new and even more entertaining content, such as the quest for treasure and an inflatable pirate ship. 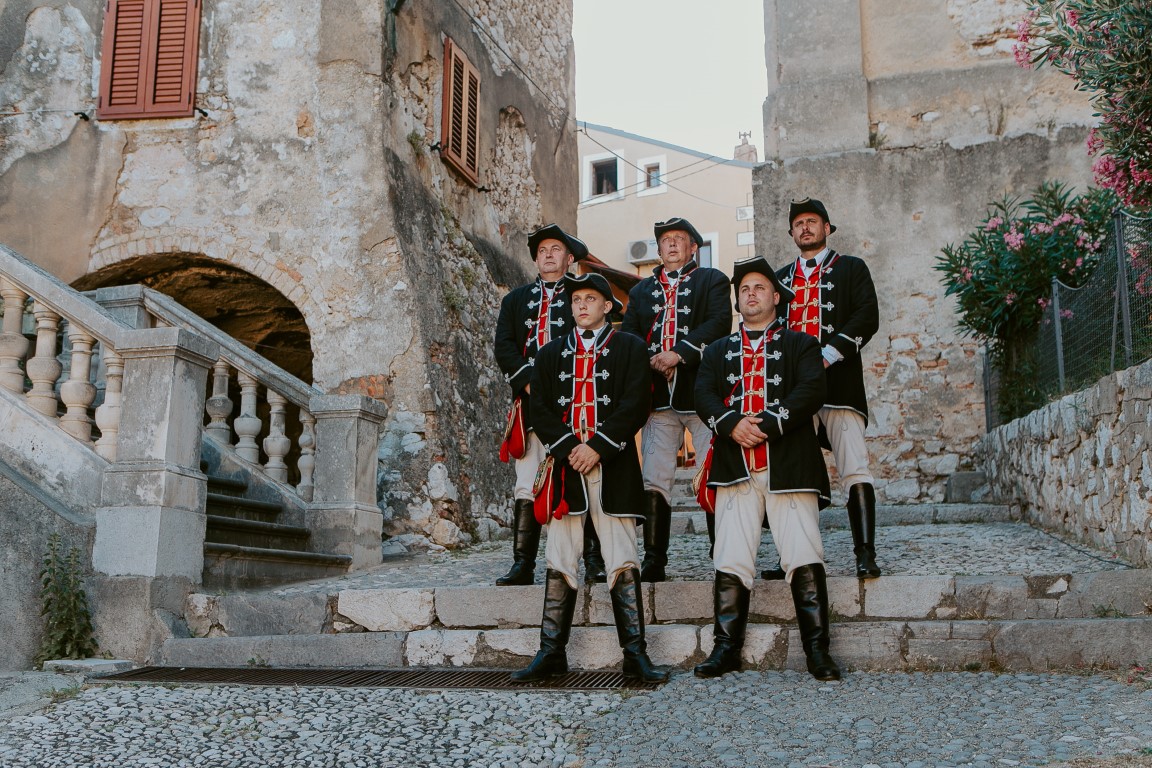 Did you know that the top of Mount Risnjak and a part of the Risnjak National Park are territorially under the jurisdiction of the City of Bakar? The climb to the top (1.528 m), organized by the Bakar Mountaineering Association, is the traditional beginning of the Naval Battle programme, and it starts at Gornje Jelenje at 8:00. At the foot of the summit at 1.418 m, there is a mountain lodge named after the well-known botanist J. Schlosser, and is the right place to take a break on the way of conquering the peak of Risnjak.

AUTHENTIC PRODUCTS ON MARGARET’S FAIR FROM 17:00

For the purpose of preserving rich history and customs, every year Margaret’s Fair follows the example of the old one, which has a long tradition as one of the largest in this area. It is a fair of authentic foods, drinks, delicacies, original souvenirs, and presentations of old customs. Numerous associations and craftsmen from the area of ​​Bakar, Primorje-Gorski Kotar County and from various parts of Croatia come to exhibit their produce. 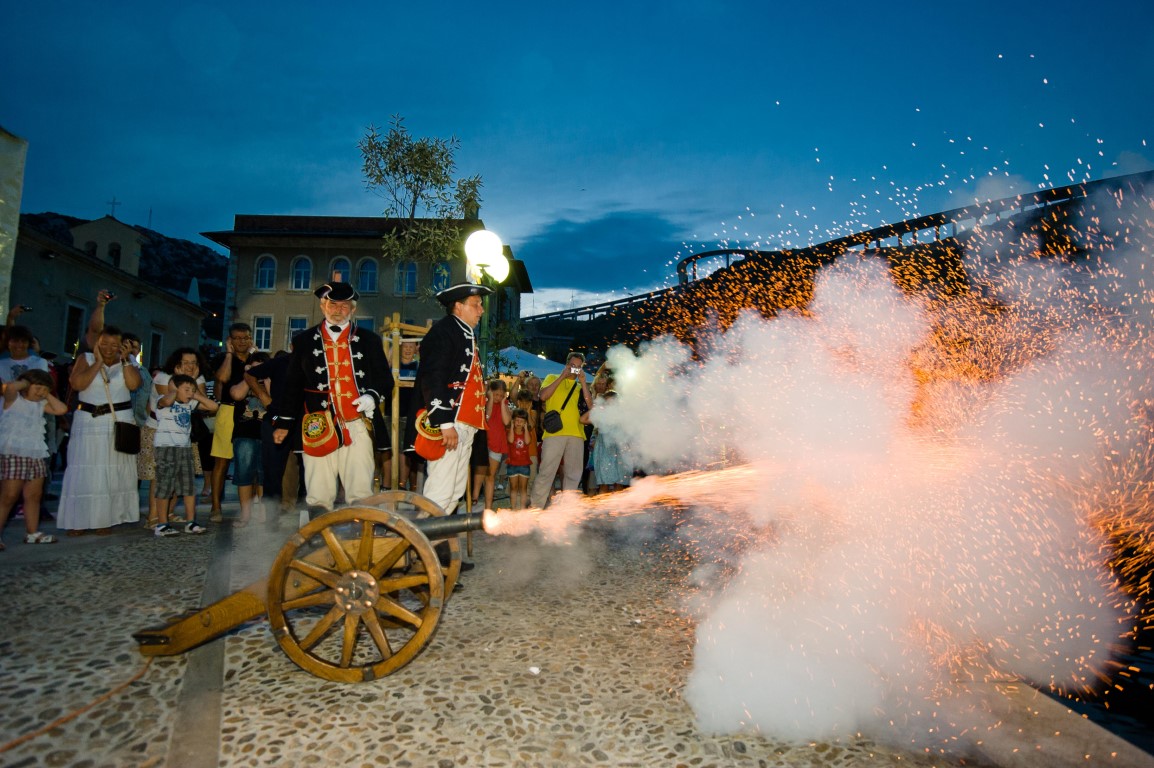 Shooting from the cannon

SMALL NAVAL BATTLE – ENTERTAINMENT FOR CHILDREN IN THE CITY GARDEN FROM 18:00 TO 21:00

To help both parents and children to enjoy themselves in the Naval Battle, the “Small Naval Battle” was launched last year. Sponsored by INA (General Sponsor of the Margaret’s Summer) in the City Garden, from 18:00 to 21:00, children will have fun in a large inflatable ship, a net with balloons, or go on a treasure hunt, draw, colour, dance, and take part in many other feats.

PROCESSION OF ST. MARGARET’S RELIC THROUGH THE STREETS OF BAKAR AT 18:30

Did you know that such a small town like Bakar has as many as 4 churches, including St. Andrew, Apostle, a co-cathedral? And two patron saints, St. Andrew and St. Margaret? St. Margaret’s Day will be celebrated on Saturday, 13 July, on the day of the Naval Battle. At 18:30, a procession with the relic of St. Margaret will set off from the Church of Mother of God from Porta to Church of St. Margaret, where the Eucharistic will be celebrated at 19:00 by Marko Šarić, parish priest of St. George in Hreljin and St. John the Baptist in Zlobin. 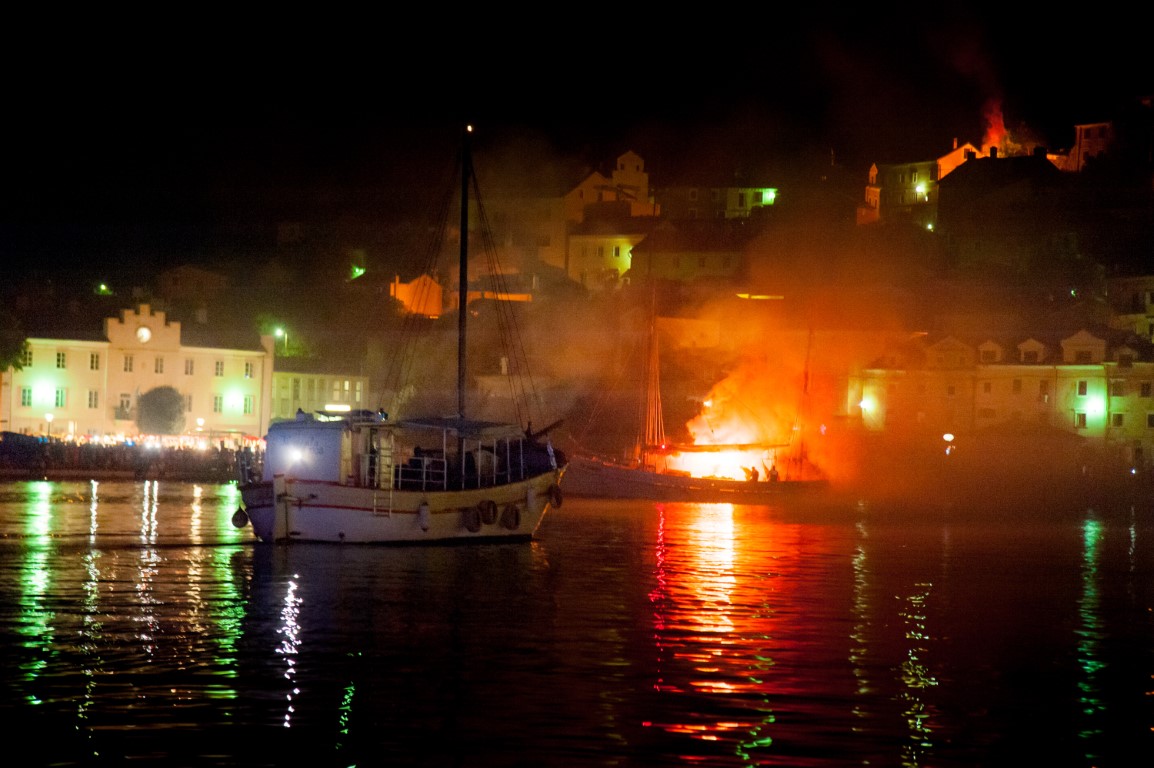 BAKAR CITY GUARD AND PROCESSION OF CROATIAN HISTORICAL TROOPS AT 21:00

This year, members of the City Guard Bakar 1848 will proudly host numerous historic troops from all over Croatia, whose procession in their costumes is the most picturesque event of the Naval Battle. In addition to commemorating 10 years of its existence by shooting from cannons and pistols in order to show visitors how Bakar was defended in the past, the City Guard Bakar 1848 will celebrate another important recognition. On the Statehood Day, the President of the Republic of Croatia, Kolinda Grabar Kitarović, awarded them for the preservation of the tradition, and contribution to the promotion of the cultural and historical heritage of Croatia. 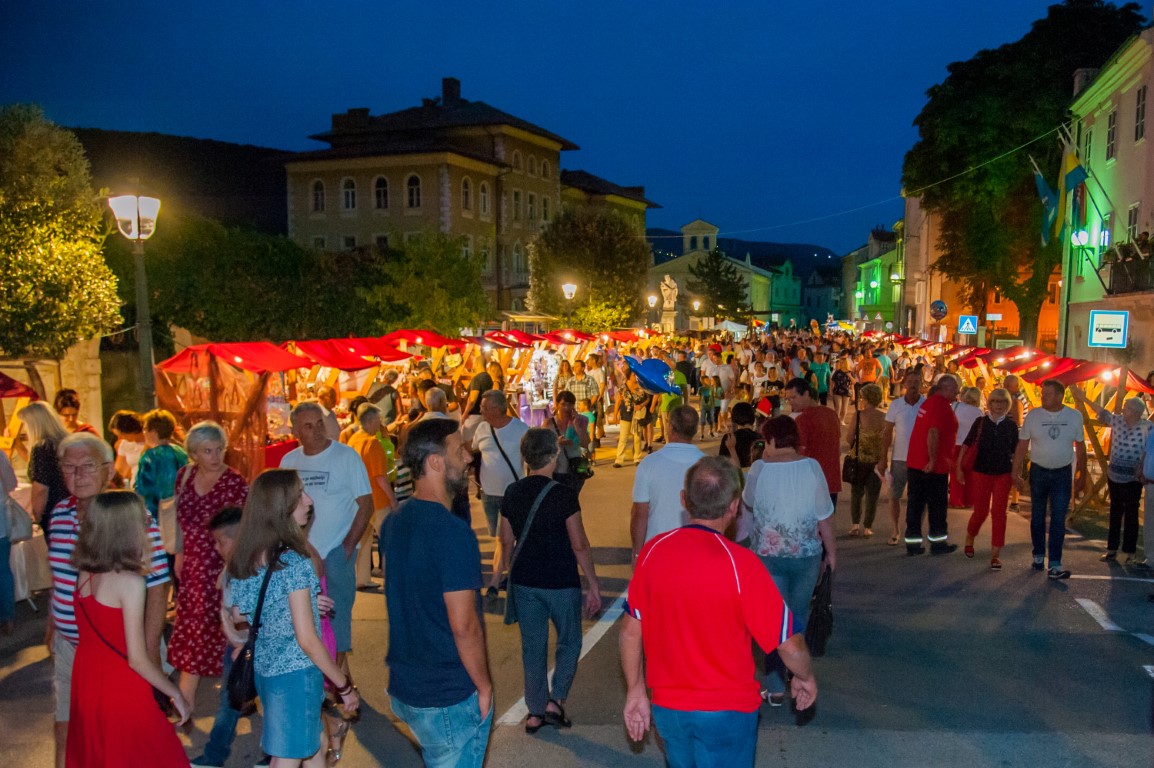 NAVAL BATTLE AND VICTORY OVER VENETIANS AT 22:30

The biggest event is certainly the reenactment of the Naval Battle. For a decade, the “Venetian” galleys have been coming to the Bay of Bakar (on the Day of the City of Bakar), to stage the famous victory, which, just like the Charter of Maria Theresa, testifies to its liberty and independence. Three old galleys equipped with pyrotechnics and, as defenders, members of the historical troops of the Croatian Army from all parts of Croatia, participate in the battle. With firing from galleys, guns, pistols and cannons from the shore, fireballs, water bombs and smoke effects, the originality of the experience of a real naval battle is guaranteed. This impressive sight will also include the “Queen of the Sea”, a training ship (anchored at the shore) and the warship of the Croatian Navy, traditional guests of the Naval Battle.

After the Naval Battle, visitors await eagerly every year the unforgettable fireworks. Owing to Pirotehnika Mirnovec, fireworks that will illuminate Bakar and the Bakar Bay will be truly spectacular, followed by hours of fun at Žal ribara, where groups “Vigor” and “Point” will take care of good mood. 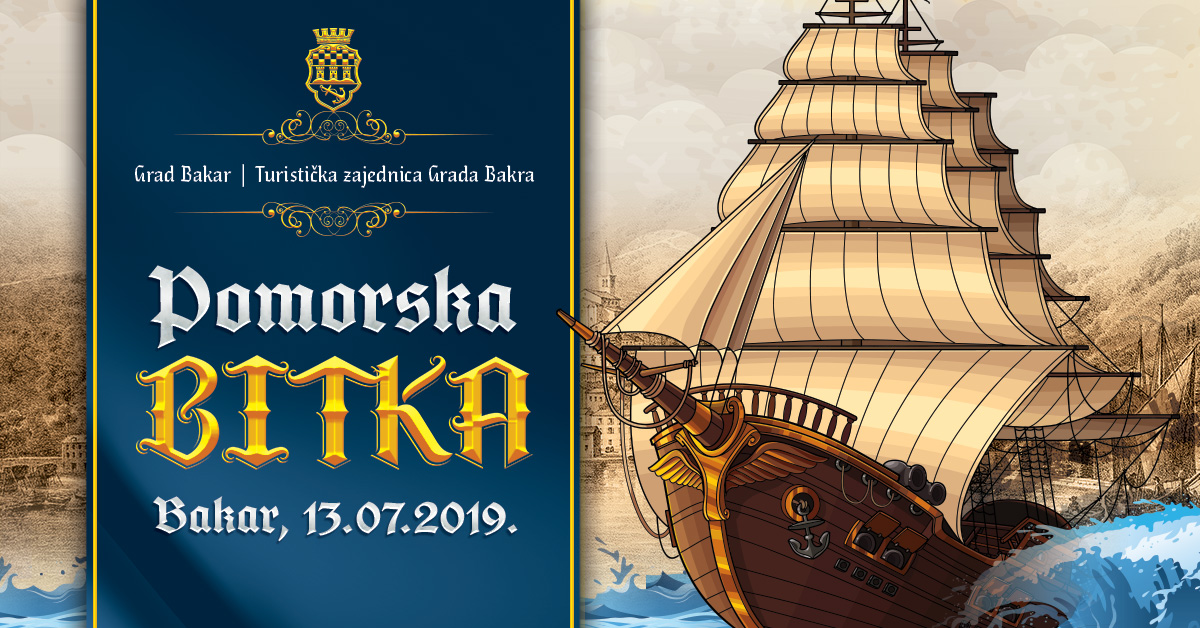