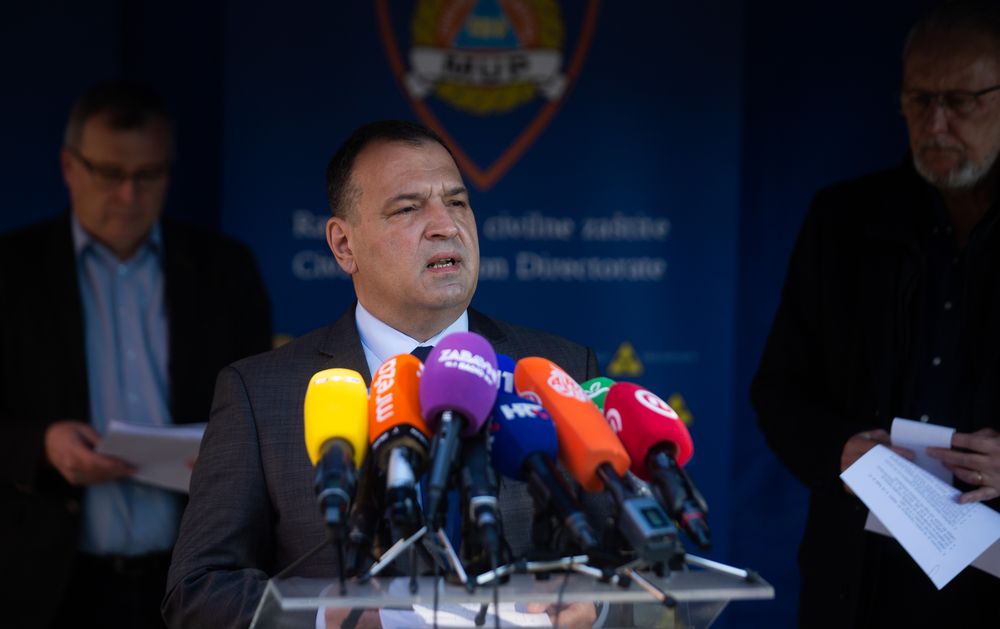 ZAGREB, March 21 (Hina) – Croatia has 168 COVID-19 cases, which is 40 cases more than on Friday, and the national civil protection authority has decided to suspend all commuter transport by rail and bus to curb the further growth of coronavirus cases.

More than 14,000 people have been ordered to self-isolate, 90 are in quarantine, and three patients are on ventilators, members of the national civil protection authority told a news conference, which today was held in line with a new regime, with a limited number of photo-reporters and technicians in attendance.

“The epidemiological situation in the country is still under control, we have information on infected persons and their movement but it is bad that some of the people in self-isolation are disobeying rules on self-isolation and making it possible for the epidemic to spread in an uncontrolled way,” Health Minister Vili Beros said, calling on all citizens to follow instructions by the national civil protection authority.

Beros said that new accommodation facilities for patients were being set up in Zagreb, Osijek, Rijeka and Split and he thanked the government of the United Arab Emirates for donating Croatia protective masks and equipment.

The head of the civil protection authority, Minister of the Interior Davor Bozinovic, said that even harsher penalties would be introduced for those who disobey self-isolation rules and the authority’s instructions.

“Our lives are going to change more and more. More and more things will be taking place indoors… All should stay at home except for those who must go to work,” the minister said.

All commuter transport and long-distance transport by train and bus will be suspended and public community areas will be closed.

Railway and bus stations will be closed.

Travel to islands will be possible only for people who live on islands.

As for public green areas, Bozinovic said that gatherings in such areas would be banned.

Police officers will be patrolling such sites and punish anyone who disobeys the rules, the minister said, warning that police would intervene if the recommended distance between people was not respected.

Only more serious cases to be hospitalised

The head of Zagreb’s Fran Mihaljevic Hospital for Infectious Diseases, Alemka Markotic, said time had come to get serious.

“We are not watching a movie, this is our reality. I have seen people assembling. If we want a Corona party, we will have it, but I don’t think we want that. Because the elderly will end up seriously ill, on a ventilator. We have been admitting a growing number of patients to the hospital. We are now paying the cost of skiing trips and non-compliance with self-isolation rules,” said Markotic.

She stressed that only patients in a more serious condition would be hospitalised and that cases with milder symptoms would have to find a way to stay home in self-isolation.

The head of the Croatian Public Health Institute, Krunoslav Capak, said that intensive work was underway to define further measures as time had come to stop everything that was not vital to making minimum activities possible.

“The number of cases has been growing at an exponential rate, so we have to introduce stricter measures,” he stressed.

Capak said that 90 people were in quarantine – 54 are Croatians and the rest foreigners. In addition to that, 45 truck drivers are in special quarantine. Self-isolation has been ordered for 14,134 people and 993 people, who were in contact with infected persons, have been under strict epidemiological supervision.

The news conference of the national civil protection team, held twice a day, will as of Saturday be covered by the HRT public broadcaster from which other media outlets will be able to take over broadcasts according to the usual procedure.

The Ministry of the Interior has called on media outlets not to send sound technicians and cameramen to its news conferences, but rather only reporters who will have to comply with orders on minimum personal distance.