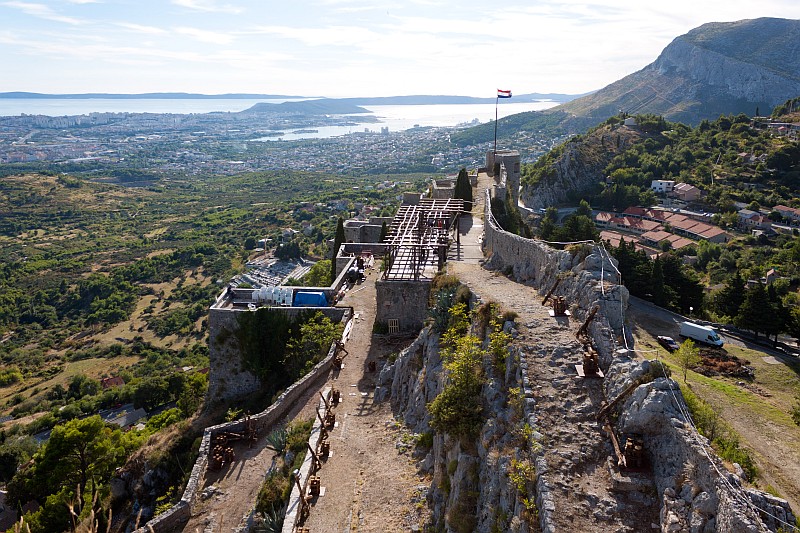 ZAGREB, Nov 3 (Hina) – The Klis Fortress logged this year’s 100,000th visitor on October 29, 51% more visitors than at the same time in 2018, and this year’s ticket revenue is a record-high HRK 5 million, according to the information provided by the authorities of Klis Municipality overlooking the City of Split.

Municipal head Jakov Vetma said the municipality was “investing a lot in the reconstruction of the fortress and in expanding products. Thereby we contribute not only to tourism and development of our community but the whole region’s.”

Klis Fortress is one of Europe’s most important and most beautiful fortresses and its cultural heritage deserves to be properly promoted for tourism, he said.

Part of the money made from tickets will be invested in key infrastructure projects and population measures intended to improve the quality of life, Vetma said.

The fortress stands on the steep cliffs of the gorge between Kozjak and Mosor mountains.

“It was built on an extraordinary strategic location that allows military and commercial control over the whole Klis valley and the area of Salona and Split. Because of its importance, Klis was often referred to as the key to Dalmatia and the heart of the medieval Croatian kingdom,” according to the information available on the Kliss Fortress website.

“Klis’s greatest significance for Croatian history dates back to the 15th century when it found itself at the crossroads of the three empires – the Ottoman Empire, the Venetian Republic and the Habsburg Monarchy. Klis was the home of the Uskoks, military units that got their name because they jumped into („uskociti“ in Croatian) the enemy territory, pillaged it and returned to their base. The leader of the Klis Uskoks was Petar Kruzic, who defended the fortress with his men for more than twenty years against powerful Ottoman army. Nevertheless, with very poor help from the Habsburg ruler Klis could not resist forever, and in 1537 it fell into Turkish hands.”

The fortress had its last major role in the military sense during the War of Candia between the Venetian Republic and the Ottoman Empire. In the end fell into the hands of the Venetian army in which many Croatians were conscripted. “From that point on, Klis will no longer see larger military action beneath its walls – it remains in Venetian hands until 1797 when it comes under the French rule. By the fall of the First French Empire fortress became part of the Habsburg Monarchy, and with its abolishment it shared the fate of Croatian territories until 1990, when the flag of Republic of Croatia was flown over it.,” according to the history of this landmark of the Split hinterland.