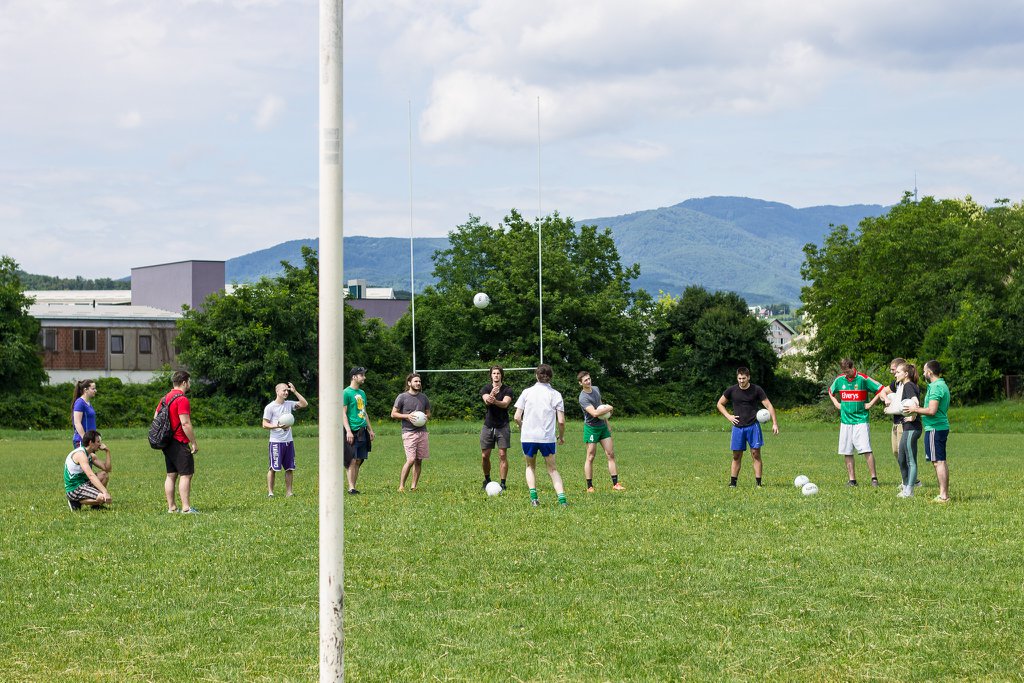 Living in Croatia, it’s easy to tell that Croatians love their sport. It’s also fairly clear that football is the Number One sport as well.

Irish people love their sport as well. But what you might not know is that the Number One sport in Ireland isn’t football. It’s not rugby either. It’s a sport many people probably have never heard of. It’s Gaelic Football.

Gaelic football is played on a massive pitch – as big as two soccer pitches beside each other – by teams of fifteen players with rugby style goalposts (the bar is lower and the posts are a bit wider). They use a ball that is like a soccer ball, but smaller and heavier. You can use your hands to catch the ball and fend off other players. You can kick the ball to your teammates off the ground or from your hands. You can’t throw the ball, you must fist-pass it, using the heel of your hand to hit to your teammates. You can run no more than four steps with the ball in your hand before you must either bounce it like a basketball (but not twice in a row) or kick it to yourself. You can score one point by kicking the ball over the bar and between the posts or score a soccer-style goal in the net, which is worth three points.

Now for the first time you can play the sport in the Croatian capital Zagreb as a group of enthusiasts have started the first club – GAAinZagreb. The club is also inviting anyone to come down and give the sport a go.

“Don’t worry that you have never played, we love showing off the skills and doing the drills that’ll have you up and running and scoring points like nobody’s business in no time. When you come along, you’ll see that our sport has elements of many other sports: some of the scoring and defensive tactics echo the screen or posting up in Basketball; catching the ball high over your head while airborne looks like Aussie Rules; and some of the physicality looks a bit similar to rugby. However, we don’t look to highlight hard contact. In Gaelic, you can tackle someone shoulder to shoulder and you can try to bat the ball from their grip, but you can’t pull, drag or wrestle your opponent,” GAAinZagreb said, before adding.

“In our sports, men and women can train and even play together but we operate separate competitions too so that the physical differences are equalised and everyone is playing on the same pitch at around the same level.” 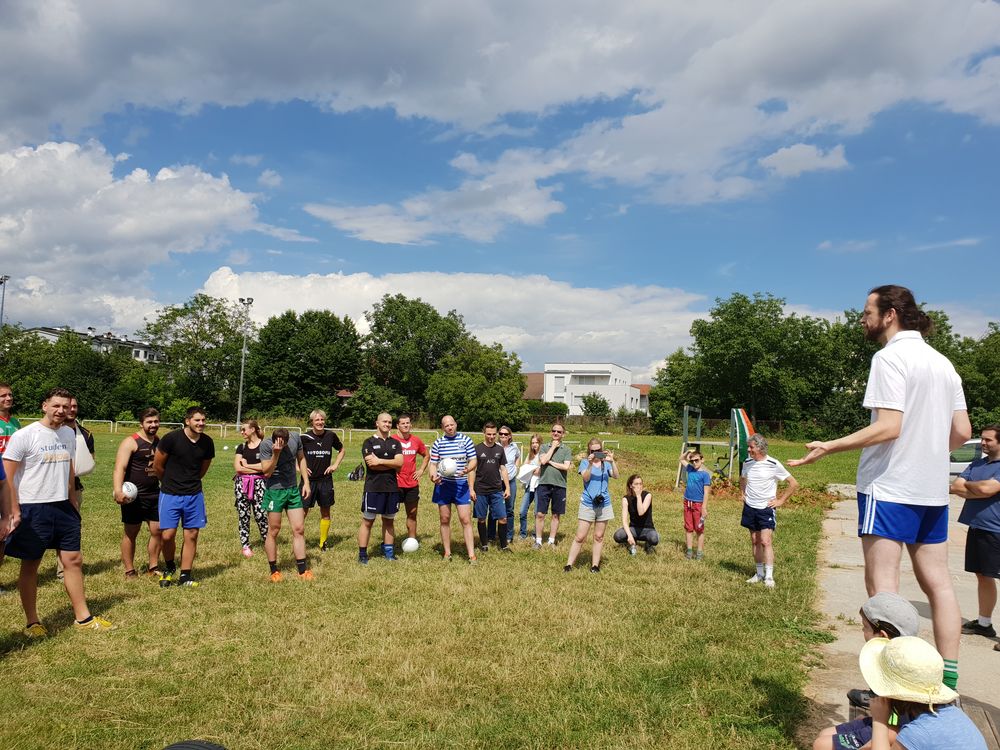 Some might wonder why on earth would we play Gaelic football in Zagreb?

“Well, another thing that you mightn’t know is that there are almost 100 Gaelic sports clubs in Europe alone. And there are hundreds more all over the world. Wherever we Irish emigrated to, we brought our sports with us, and we bring people together through our unique sporting traditions. Only last week, in a European Gaelic football competition of over 50 teams, men and women, graded on skills and experience, a Croatian girl captained a team from Galicia to glory in Vienna. And none of her teammates were Irish.” 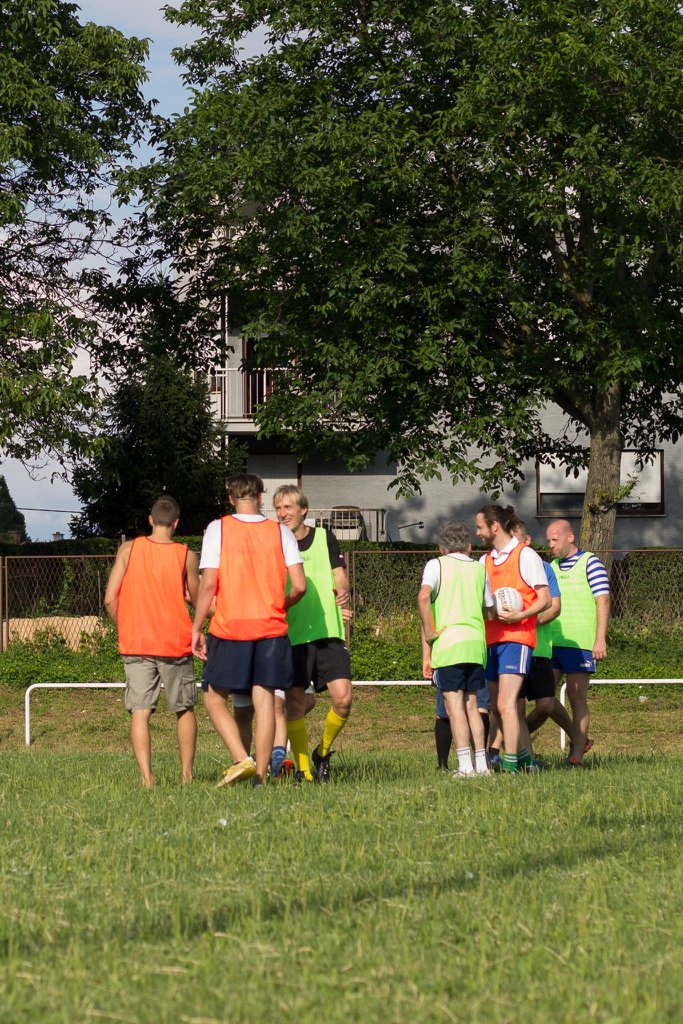 One of the most important and almost sacred traditions in Gaelic sports is that it is amateur. None of the players, not even the top players who might play for one of Ireland’s 32 counties, are paid. Sure, some of their expenses for training, like gear and nutrition, might be covered, but after they play a game on Sunday, they go back to work or college on the Monday. They train at least three times a week as well as having work and other life commitments. Many of them also give back to their communities through charitable work. Because as Tamara Mulaosmanovic, the winning Galicia captain said, “We don’t win any money but this (medal) is worth more than anything”.

‘We don’t win any money but this (medal) is worth more than anything’ – Croatian-born Tamara Mulaosmanovic after captaining Fillos de Breogán from Galicia to the @LadiesFootball Ladies Intermediate title at yesterday’s European Finals in Vienna.. See more on our Facebook page. pic.twitter.com/8svMulznjF

“Our Gaelic football start-up has really literally just started. Our Irish community is small in number but big on pride and passion for our sport. We had a really fun family fun day last year as well as hosting (and beating!) the Slovak Shamrocks. We want to share it with anyone and everyone and create a fully fledged Gaelic football team in Croatia, one that can travel with pride to European competitions, and host visitors from all over the world.”

No one achieves anything on their own and GAAinZagreb are no different. The club gets support from so many people in Zagreb. From Zagreb Rugby Club in Rudeš where they train on a weekly basis to their friends in Aussie Rules Croatia who have turned up and played in games. From companies and friends who helped arrange their family day and matches to sponsors like Atlantic Grupa to the local and international community in Zagreb who participate in training sessions. Crucially, they have had the unstinting support of the Embassy of Ireland in Zagreb and the Ambassador, Olive Hempenstall.

“As we are fond of saying in Ireland, at the end of the day, sport is a brilliant way to make lasting friendships and creating communities. In Ireland, small towns (big towns too!) and villages and parishes identify with their Gaelic sports club. Mums and Dads play and their sons and daughters too. They raise money to keep the club going and keep the club growing. They celebrate their successes and those among them who graduate to the county team are granted legendary status. In Zagreb we want to start our own legends and traditions as well. So get in touch and turn up to training. We promise you: once you get the O’Neill’s ball in your hand, you’ll never want to let it go.”

If you are interested to play or check out the sport, you can find them on Facebook at GAAinZagreb or drop them an email at [email protected]