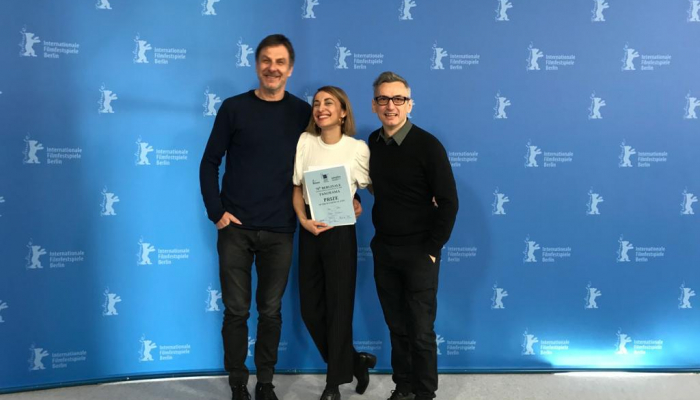 Father, a film directed by Srdan Golubović, which is a Croatian minority co-production, with Croatian co-producers Lana Matić and Boris T. Matić of Propeler Film, screened in the Berlinale Panorama section and returns home with the Audience Award and the Prize of the Ecumenical Jury.

“The Audience Award in the Panorama section is one of the greatest achievements of Croatian film in recent time and it is the most important prize in the section. The Prize of the Ecumenical Jury is another valuable international accolade the film has earned at Berlin. We would like to thank everyone from Croatia who worked on the film, especially Goran Bogdan in the lead role and screenwriter Ognjen Sviličić. These awards pave the way to a wider audience across Europe,” said producers Boris T. Matić and Lana Matić after the award ceremony.

The film about a father who travels on foot from his village in the south of Serbia all the way to Belgrade after his children are taken into custody because he is too poor to support them is a story about a marginalized character and a loser who, along the way, transforms into a hero of our times. Croatian actor Goran Bogdan plays the lead role, while the film’s director Srdan Golubović and Croatian director and screenwriter Ognjen Sviličić co-wrote the script. The films is a co-production between six countries, Serbia, France, Germany, Croatia, Slovenia and Bosnia and Herzegovina, with Propeler Film’s Lana Matić and Boris T. Matić as Croatian co-producers. Among others, the film was supported by the Croatian Audiovisual Centre and Eurimages.

This was Srdan Golubović’s third time to be featured in the programme of the prestigious Berlin IFF where he previously appeared with The Trap (2007) and Circles (2013), the latter also winning the Prize of the Ecumenical Jury.

The Panorama Audience Award – the award bestowed by over 20 000 Berlinale visitors – went to Father, which in addition received the Ecumenical Jury Prize accompanied by a financial prize of 2 500 euros.

At the 70th Berlinale gala closing ceremony, held on Saturday, 29th Feb, the Golden Bear for Best Film went to There Is No Evil by Iranian director Mohammad Rasoulof, while Eliza Hittman took home the Silver Bear Grand Jury Prize for Never Rarely Sometimes Always. Korean director Hong Sang-soo was awarded the Silver Bear for Best Director for The Woman Who Ran, while the Silver Bear in the acting categories went to Paula Beer for her role in Undine and Elio Germano for starring in Hidden Away. The Silver Bear for Best Screenplay was taken home by the D’Innocenzo Brothers forBad Tales, while Jürgen Jürges scooped up the Silver Bear for Outstanding Artistic Contribution for his outstanding cinematographic work on DAU. Natasha. The list of all awarded films and filmmakers is available at Berlinale’s official website.

This year the Berlin International Film Festival was held 20th Feb–1st Mar, 2020, while the 71st edition will take place from 11th to 21st February.