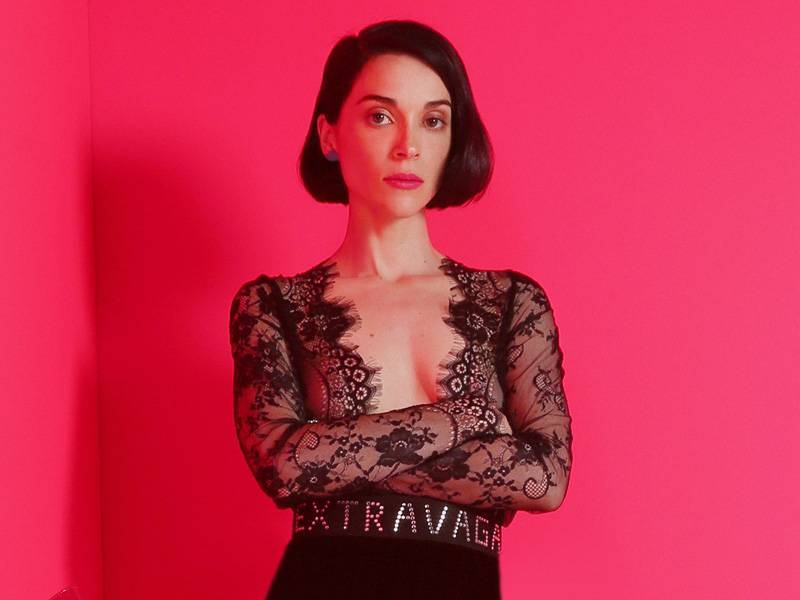 Grammy award winner, virtuoso guitarist and one of the most acclaimed artists of her generation, St. Vincent is making her Croatian live debut at the Main stage of INmusic festival #13.

Annie Clark, known under her artistic name St. Vincent, is an American singer-songwriter, multi-instrumentalist and “the first truly 21st-century guitar hero” whose live performances regularly supersede any expectations from either critics or audiences.

Annie Clark chose her moniker inspired by a lyric from Nick Cave’s „There She Goes My Beautiful World“, referencing St. Vincent’s hospital as the dying place of the poet Dylan Thomas.

Drawn to arts and music from a young age, she learned to play the guitar at age twelve and as a teenager started working as a roadie for her aunt and uncle, better known as the jazz duo Tuck & Patti. She studied music at Berklee College of Music in Boston where she began her collaborations with various other musicians. In 2006 Annie Clark joined Sufjan Stevens’ touring band and started work on her own music. Her debut album Marry Me was released in 2007 to critical acclaim and immediately comparisons to Kate Bush and David Bowie started popping up due to St. Vincent’s peculiar music style.

Soon followed two more albums, Actor (2009) and Strange Mercy (2011), which only re-affirmed the uniqueness and talent St. Vincent was bringing to the scene. Simultaneously, St. Vincent draws the attention of living legend David Byrne, starting a collaborative project that resulted in the highly acclaimed album Love This Giant released in 2012. David Bowie would soon also peg her as one of the most progressive artists of her generation, according to Mike Garson.

The rest of the world would also take notice of St. Vincent by 2014 and the release of her self-titled fourth album, consensually hailed as one of the best albums of that year by all relevant music journalists and deserving of the Grammy for Best Alternative Album which was awarded to St. Vincent in early 2015. October of 2017 saw the release of her long-awaited fifth studio album Masseducation, once again received to unanimous critical acclaim. In between two albums, Annie Clark wrote and directed a short movie titled „Birthday Party“ as part of the XX anthology, became the first female Record Store Day ambassador, and designed an electric guitar anatomically fitted for the female body, just to name a few of the recent creative outlets of this versatile artist.

Effortlessly spanning from experimental rock and electropop to jazz and soft rock, Annie Clark is truly a renaissance woman for the 21st century, and her artistry and performative energy will be delivered to the main stage of INmusic festival #13!

INmusic #13 will take place at the Isle of Youth in Zagreb’s Lake Jarun from June 25th to the 27th, 2018. St. Vincent will be joining an impressive set of rock greats – Queens Of The Stone Age, Nick Cave & The Bad Seeds, Alice In Chains, David Byrne, Portugal. The Man, The Kills, Frank Carter & The Rattlesnakes, and many more names to be announced. Festival tickets are available online via the official festival webshop for just 53 EUR as well as seven-day camping tickets for just 33 EUR.