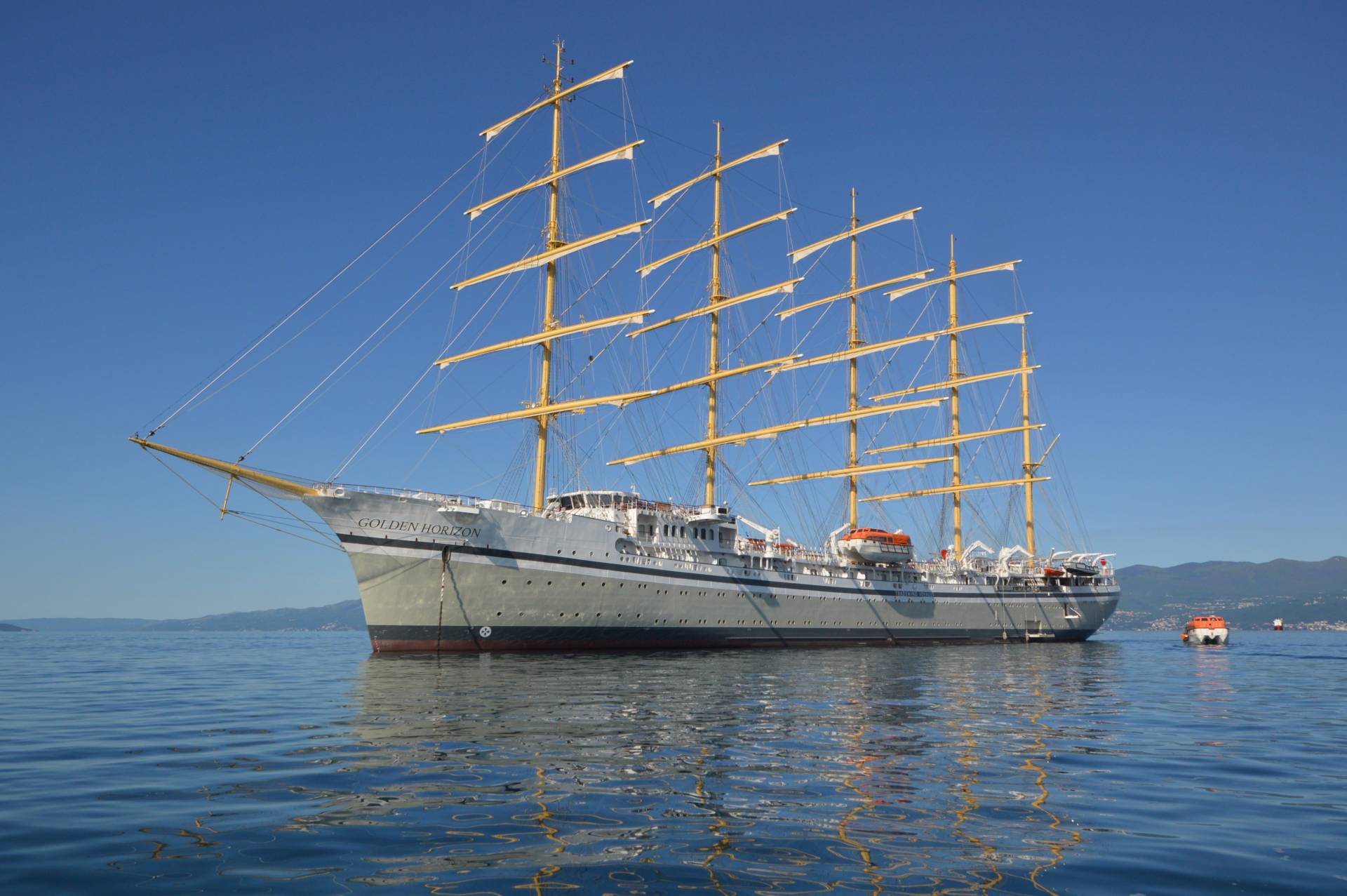 The “Golden Horizon”,  which is the largest square-rigged cruise ship in the world, has departed the Brodosplit shipyard in the Croatian coastal city of Split where it was built on Wednesday.

Brodosplit is one of the few shipyards in the world that can design, build, and equip such a unique vessel with complex equipment and a luxurious interior.

The type of clipper sailing boat with such square-rigged sails is called Bark. In a way, it is a replica of the famous sailing ship France II, which was built in 1913. The clipper is 162 meters long and 18.5 meters wide. It has five masts with 36 cross sails with a total area of 6,347 square meters. 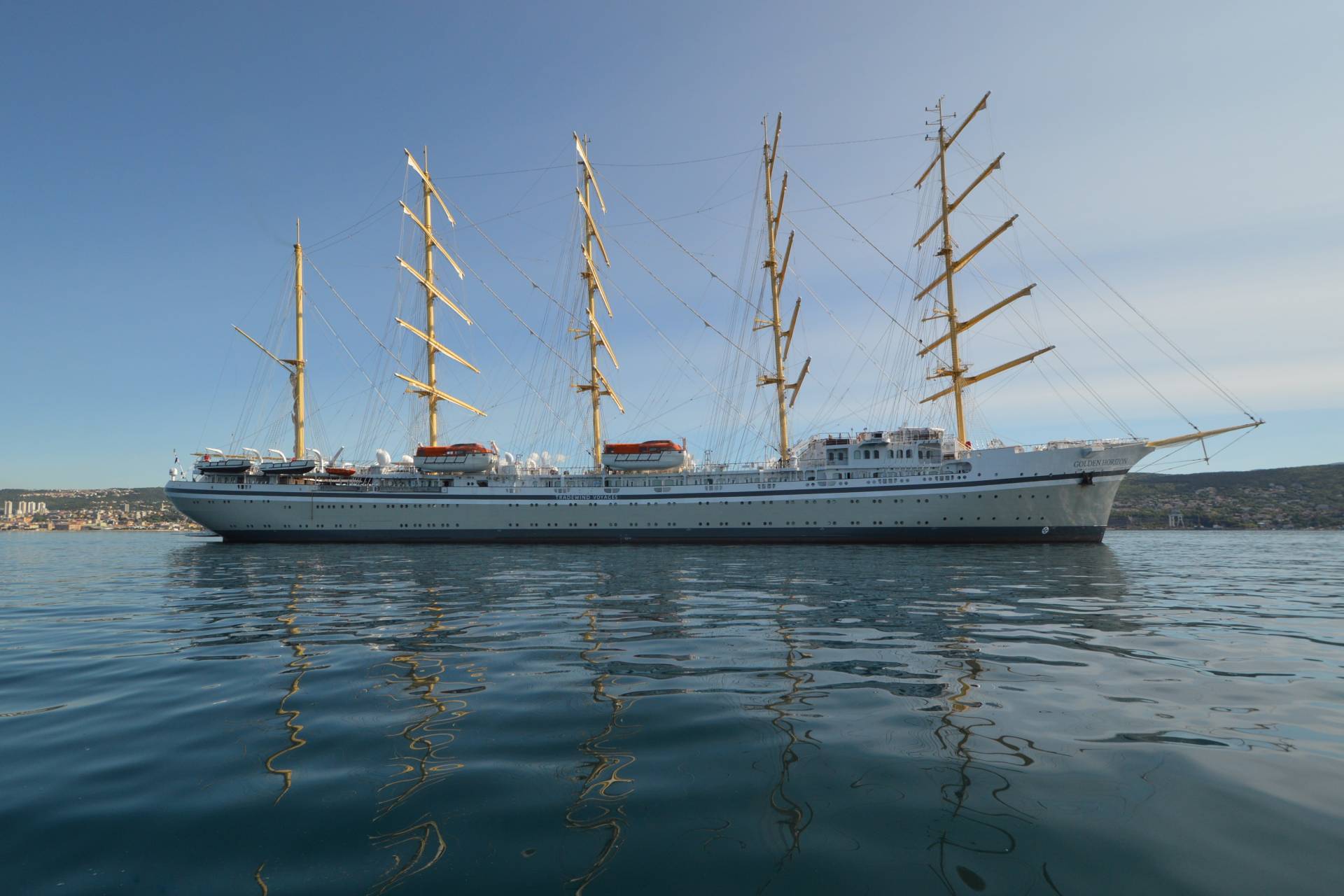 The largest mast is an impressive 63 meters high and weighs 24 tons, and the largest cross is 31 meters long. This luxurious vessel can accommodate up to 272 passengers and will provide the service under the Tradewind Voyages from the UK. As far as itineraries are concerned, it is designed for voyages according to “where the wind and sea currents take it”. The name itself, “Tradewind”, reveals that the voyages on this clipper refer to great destinations in various seas around the world. Traveling by “Golden Horizon” does not include going in and out of the same ports. The plan is to be constantly on the move and sail around the world.

The “Golden Horizon” will allow guests to explore the world and oceans more sustainably. All trips are planned based on prevailing wind and currents around the world, often following traditional trade routes, a genuine maritime experience. 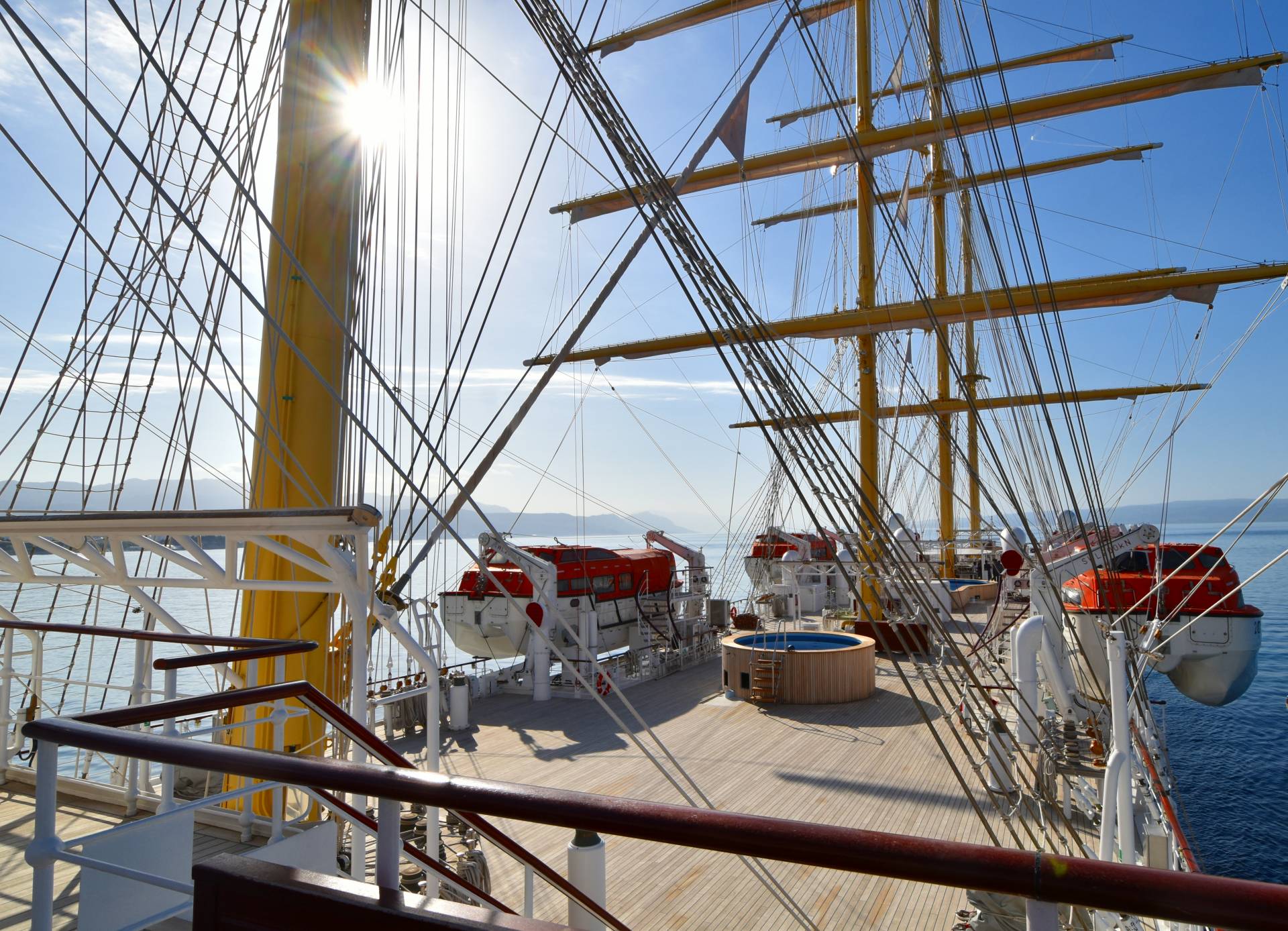 The vessel will offer top-quality food and service and attract all those who want to travel the world in a slightly different way. This includes a sophisticated program of enrichment and well-being, as well as, for those who want, the opportunity to engage in free water sports from the adjoined marine platform.

The sailing boat is 162 meters long with a carrying capacity of 2,000 tons. There are five decks, and the vessel can accommodate 272 passengers in 140 luxury cabins as well as 159 crew members. It is luxuriously decorated, but with a flair and atmosphere reminiscent of old sailing ships. There is a library and large lounges, one of which extends to three decks. 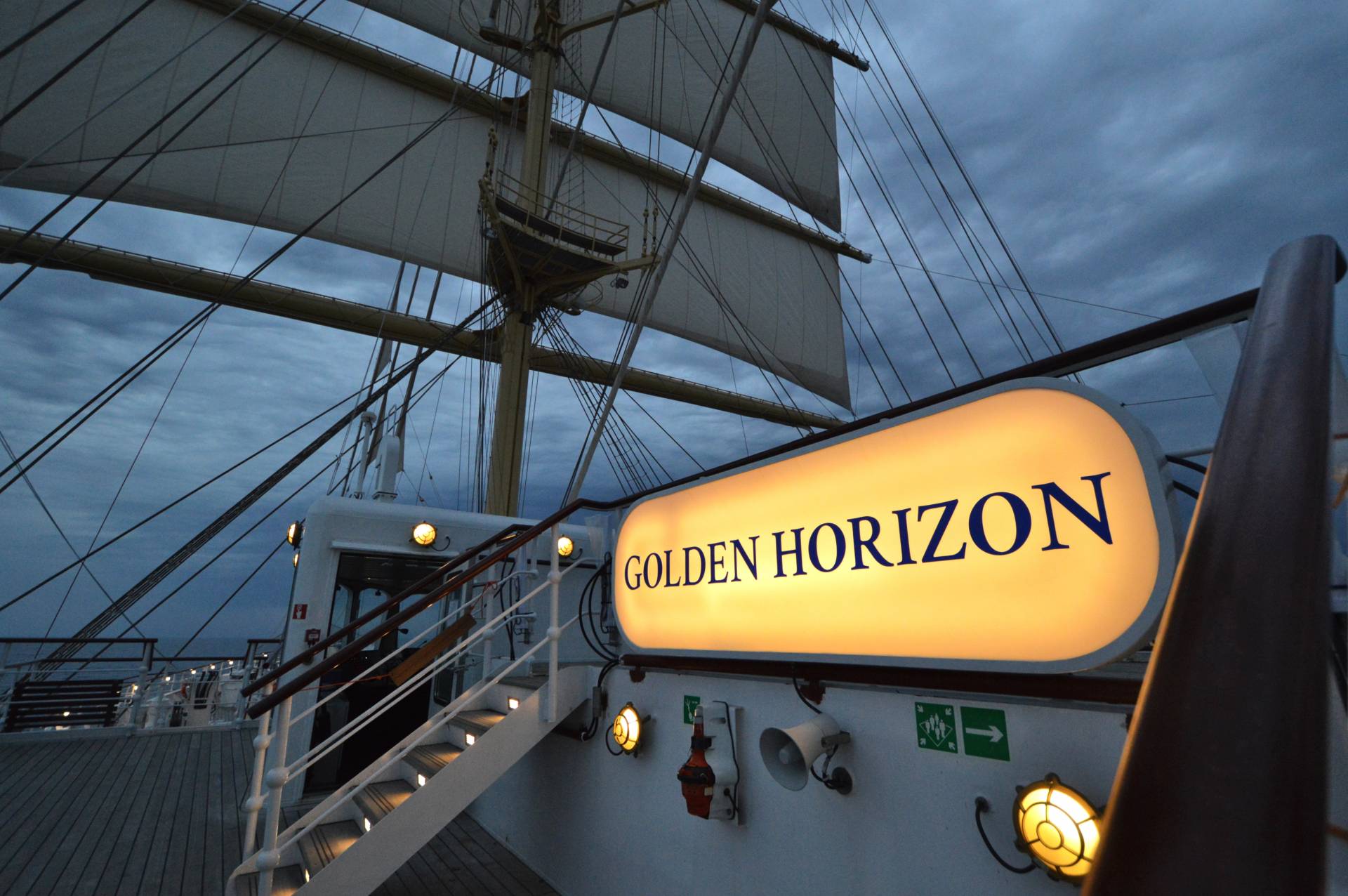 The vessel is equipped with the most modern navigation and communication equipment. Each cabin has internet, telephone, television, music, and other means of entertainment, and a Wi-Fi signal covers the entire vessel. On the open decks, there are three bars and three pools, one of which is intended for diving. The kitchen extends over three decks. Air conditioning onboard is designed according to the highest standards to meet the comfort of passengers in all conditions.

The clipper is, among other things, unique in that it is exclusively intended for sailing, although it is equipped with two independent electric propulsion motors. The larger one has the strength of 2500 kilowatt hours and the smaller one 1700 kilowatt-hours. With a total energy consumption of about 4,200-kilowatt hours, it consumes about two tons of oil per hour. With a tank of 800 tons, the engine will be able to cover 400 hours of driving without refueling.

Six lifeboats will be used as tender boats for transporting passengers to smaller ports or beaches. There are also eight rafts, four sports boats, and two smaller boats. 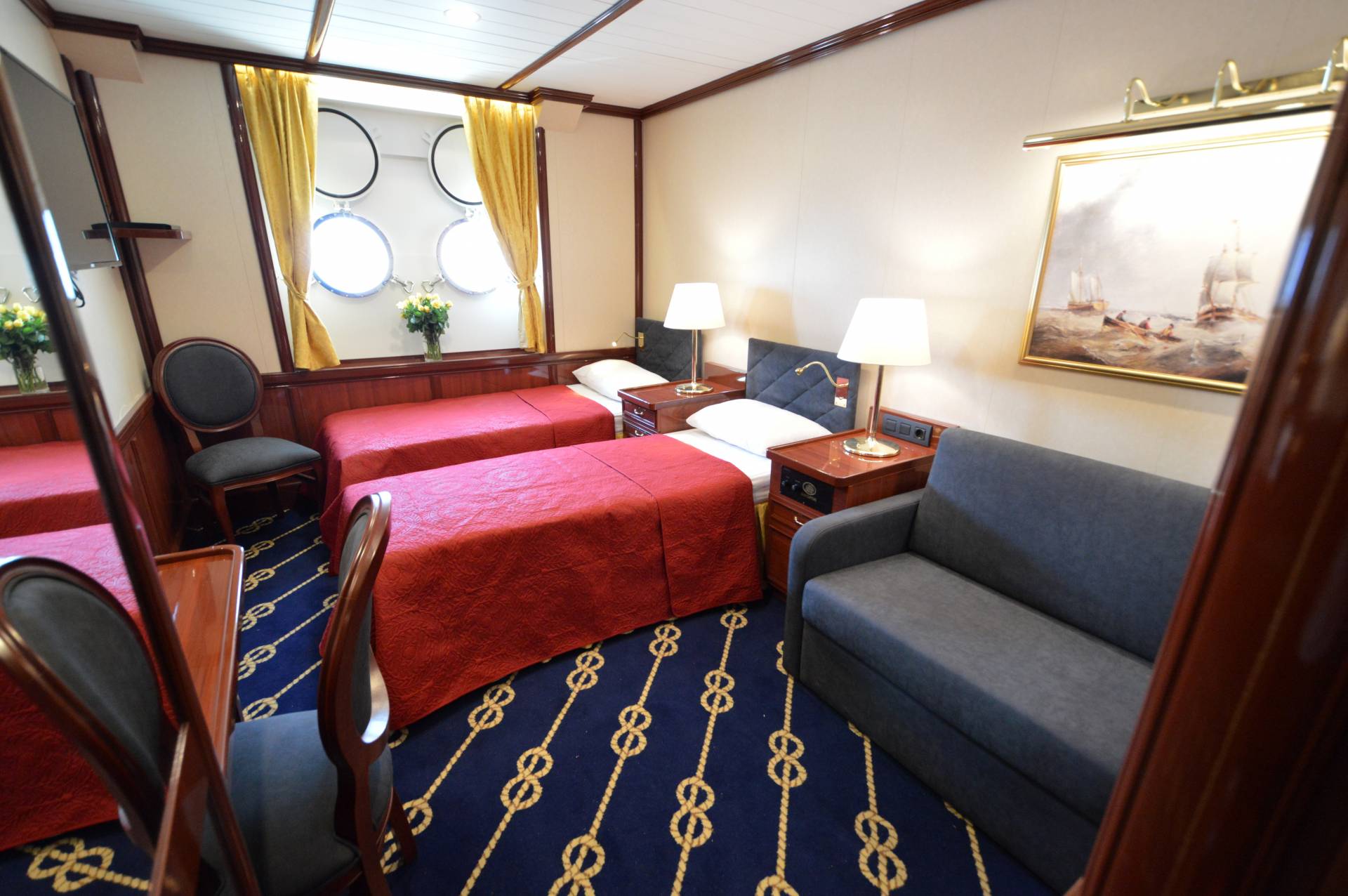 An innovative system “Safe Return to Port” is a novelty in the Croatian market, because since 2010 there are new standards for increasing the safety of passenger ships, passengers, and crew. This system denotes that all key equipment onboard has been duplicated, which is why the construction of two engine rooms with all devices to produce electricity and water, and all fuel and lubricant systems, and another additional command bridge is planned.

Onboard, practically everything is doubled, so in case of any failure, fire, or flood of any space or zone on the vessel, it will be able to return to the port from almost 2000 NM, which is the furthest point from the mainland. 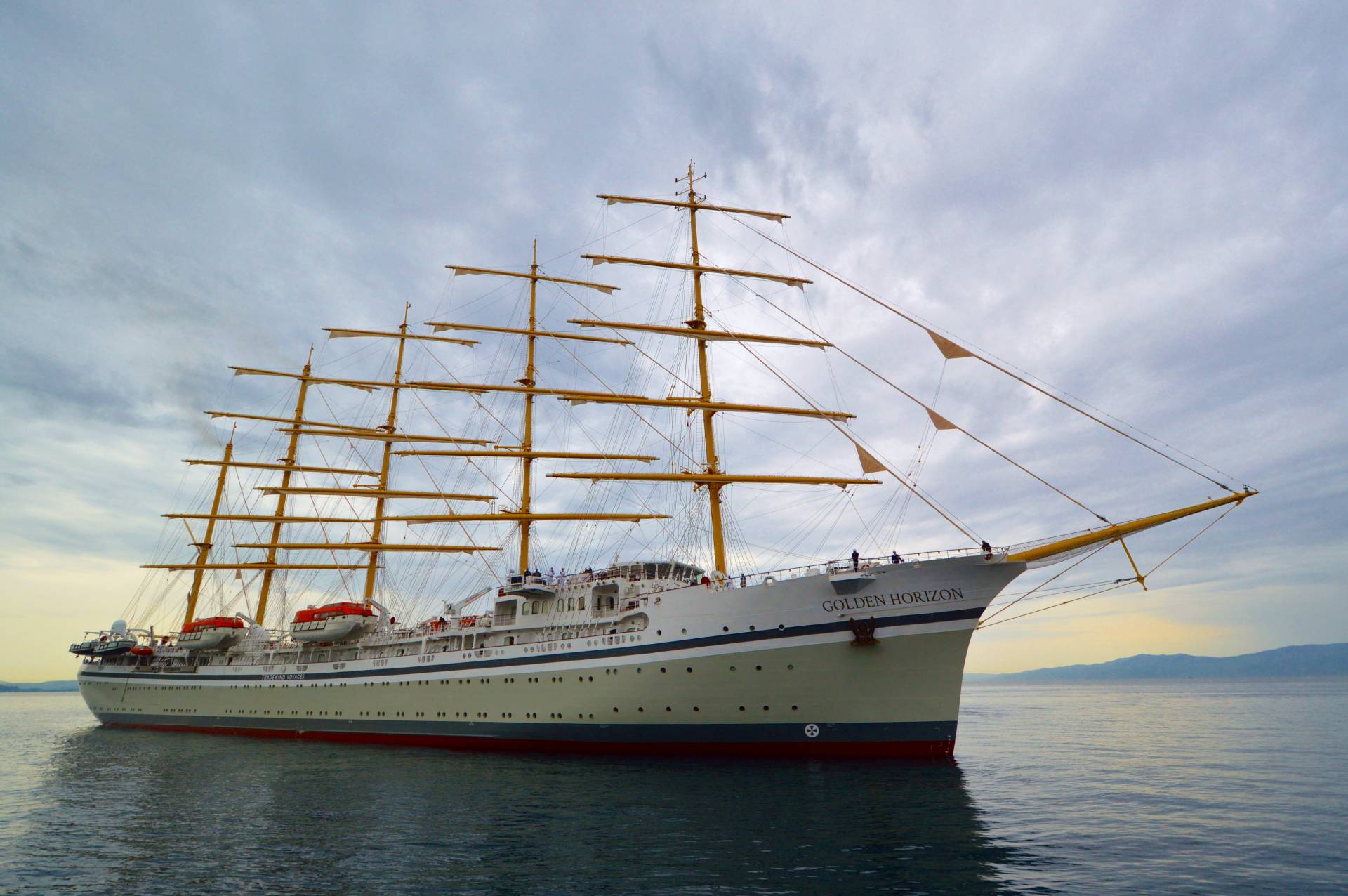 It is predicted to sail all the seas of the world, even in the Arctic and Antarctic, which is why it was built to comply with the requirements for the ice class. The sailboat speed will be around 16 knots, and it is predicted that it will be able to sail up to 20 knots with the right weather conditions and the right crew. The two-engine drive enables the speed of 17 knots, with rotating propellers, a bow thruster, and two rudders, which is why it is exceptionally maneuverable.

Such a vessel was extremely complicated to build, but Brodosplit completed the task.