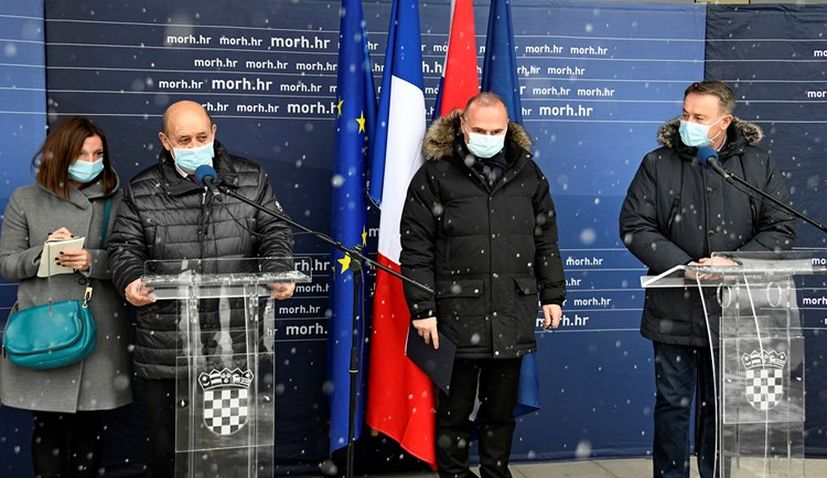 ZAGREB, 14 January (Hina) – French Foreign Minister Jean-Yves Le Drian visited Petrinja on Thursday, saying that his visit, which had been planned earlier, could not have started without first visiting earthquake-hit areas.

“It would have been unthinkable to come to Croatia without visiting Petrinja,” Le Drian said in the Petrinja barracks at the start of his official visit.

“I wanted to start my trip by visiting Petrinja and the region to express my empathy and to show just how much we in France were touched by what happened to the population here,” said Le Drian, who expressed solidarity with rescuers for “doing an excellent job.”

Le Drian said that the French remember Croatia’s support when the Notre-Dame was in flames.

Immediately after the devastating earthquake that struck Sisak-Moslavina County on 29 December, France sent 240 tents with equipment and there are 6 housing containers on their way from France.

“Thank you for your support, financial and material but above all psychological. This expression of solidarity shows that Croatian citizens are not alone,” Grlić Radman said in French.

Petrinja Mayor Darinko Dumbović told Le Drian that Napoleon’s forces were stationed in Petrinja at one stage and left their mark on the city. Le Drian then visited a linden tree planted in 1809 during the Illiryan era.

Dumbović suggested that each EU member state should take over the reconstruction of one particular building in the city.

After touring Petrinja, Le Drian will meet officially with his Croatian counterpart Grlić Radman in Zagreb.

🇫🇷 was one of the countries which quickly provided assistance & showed #solidarity with the people of #SisakMoslavinaCounty. pic.twitter.com/qWbYR5Z0Gk

Le Drian will then meet with Prime Minister Andrej Plenković and President Zoran Milanović to talk preparations for France’s chairmanship of the European Union in the first half of 2022, the situation in the Western Balkans and developments following Brexit, the French Foreign Ministry posted on its web site.

Le Drian is also expected to visit the French International School which, together with the German school, comprises the Eurocampus Zagreb, one of five in the world, where he will be met by Education Minister Radovan Fuchs.

They “are on their way to Croatia or will be in the coming days,” the Commission noted, adding that “Slovenia delivered supplementary housing containers to Croatia on 11 January.”

Most of the assistance arrived within 24 hours.

“Once more, I would like to thank all EU Member States for their prompt response to the earthquake. The overwhelming response of 15 EU Member States and 1 Participating State helping the Croatian people in times of need is a tangible example of EU solidarity,” said Commissioner for Crisis Management Janez Lenarčič.

He visited Zagreb and the area affected two days after the quake.