This past weekend, a new book by Miki Bratanić was promoted in the complex of the Bratanić family house in Vrbanj on the island of Hvar, organised by the City of Stari Grad and its Tourist Board, as part of a cultural evening sponsored by the Croatian Writers’ Association. 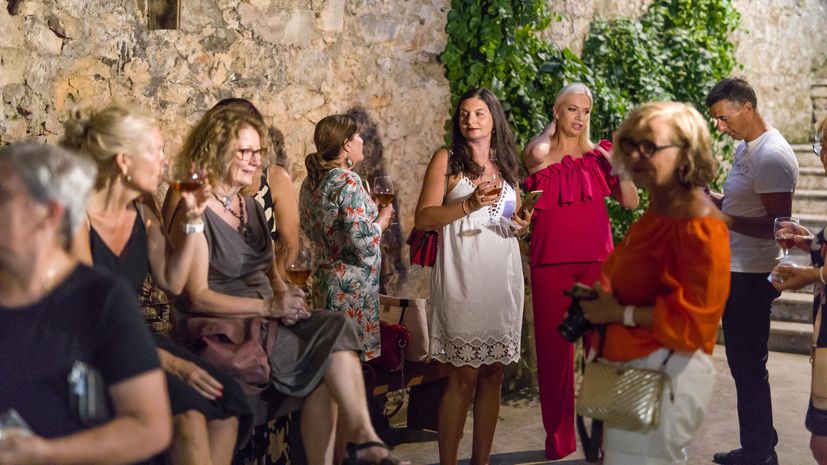 With a whiff of old local prošek, black pepper biscuits, and songs from the excellent klapa Sveti Duh from Vrbanj, led by Ivan Vidošević, visitors gathered at the Bratanić family konoba where all epidemiological measures were adhered to. 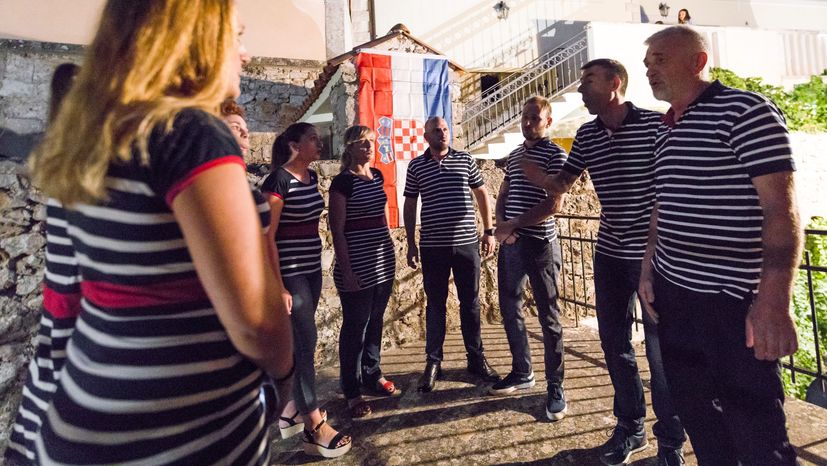 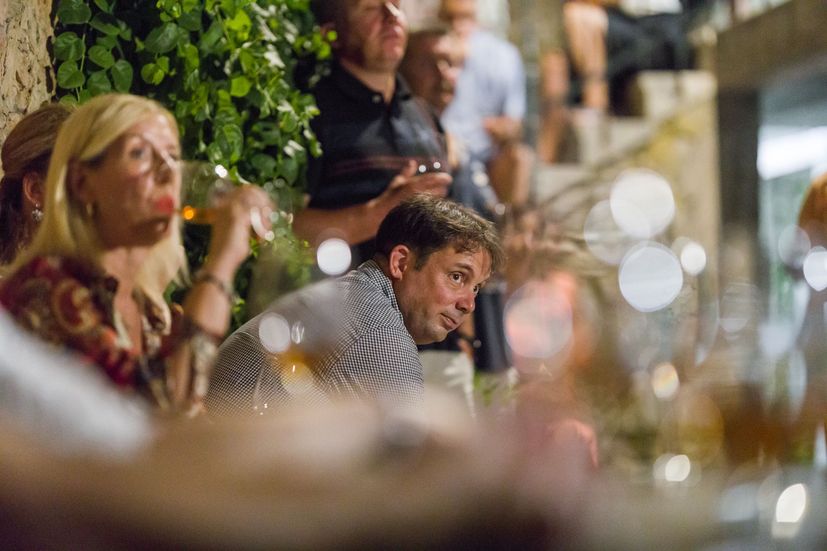 It was an unusual promotion in which the host Edita Lučić Jelić and the author of the book took the audience chronologically through the course of Bratanić’s author’s project “Story of the Konoba”, and finally presented the book itself. 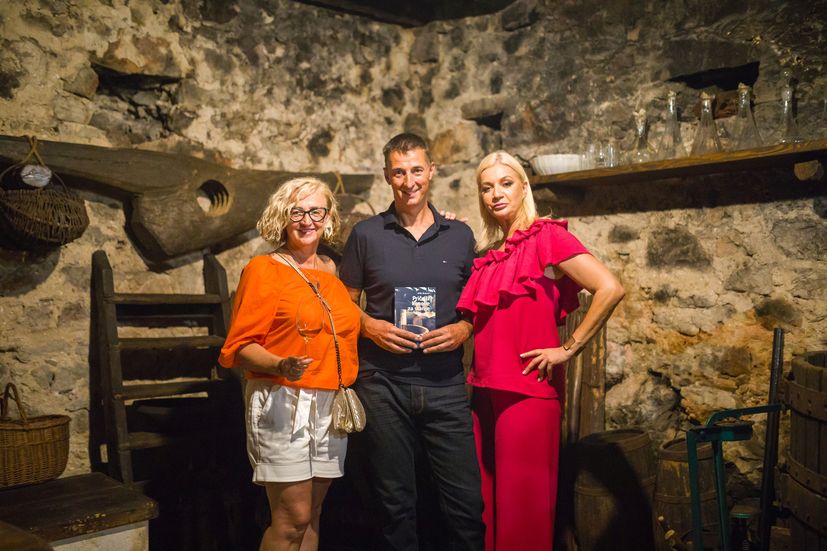 The book “Priče iz konobe za starije” (Stories from the konoba for the elders) is a collection of short stories from the lives of people who are in some way connected with the konoba, and is the author’s fourth book dedicated to the theme of the konoba.

It collects Bratanić’s personal experiences from his childhood and youth, but also the experiences of the elderly that he heard in konoba gatherings. 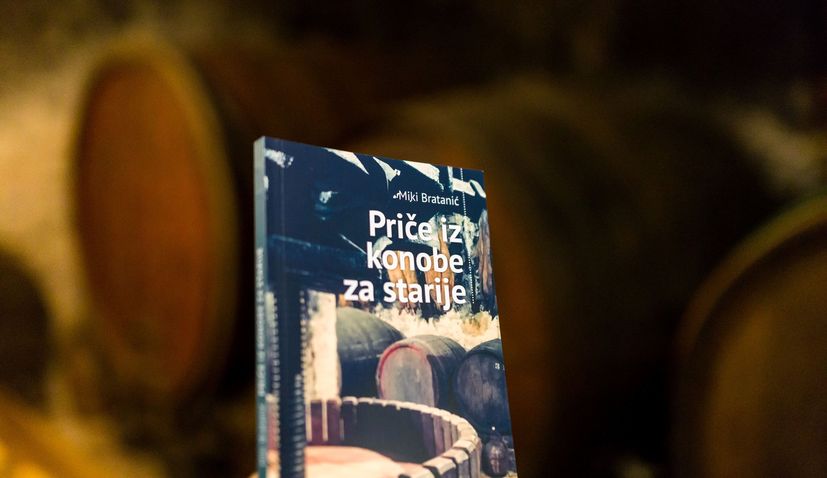 It is interesting to point out the story at the end entitled “Uprising from the konoba”, a play written by Bratanić as an imagination to initiate the uprising of the people of the island of Hvar led by Matija Ivanić, and which the author symbolically placed in a tavern in Vrbanj.

At the end of the evening, Bratanić thanked everyone who helped make this a truly cultural evening in these challenging times, and especially the director of the Old Town Tourist Board Jakša Damjanić who made great efforts to meet all epidemiological conditions necessary for organising such an event. 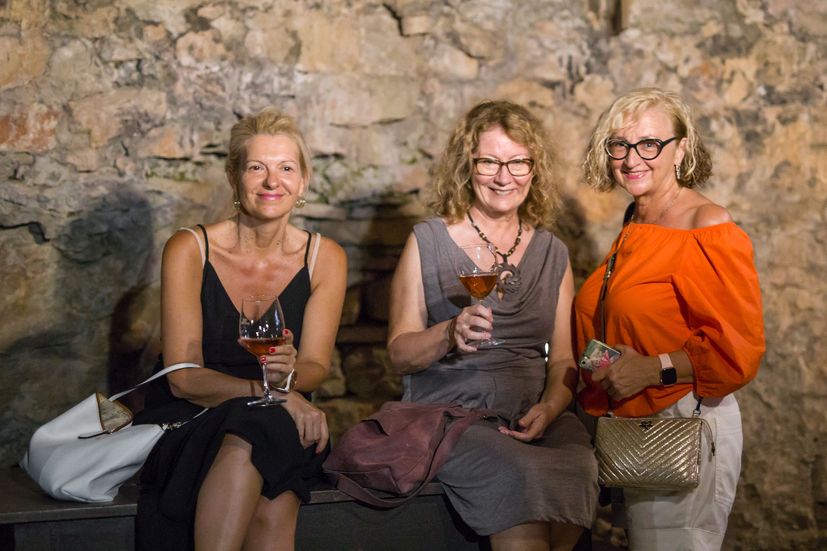 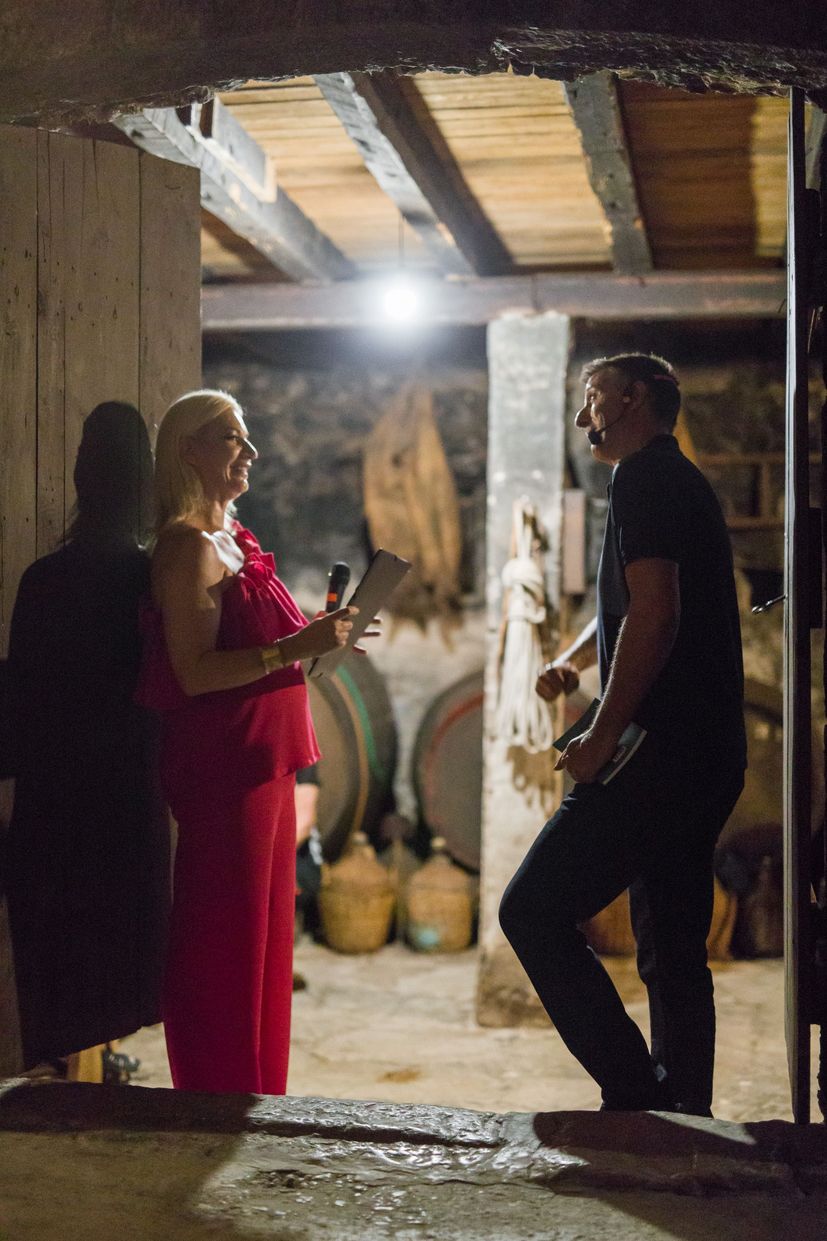 The beautiful event was recorded by photographer Nikola Radovani. 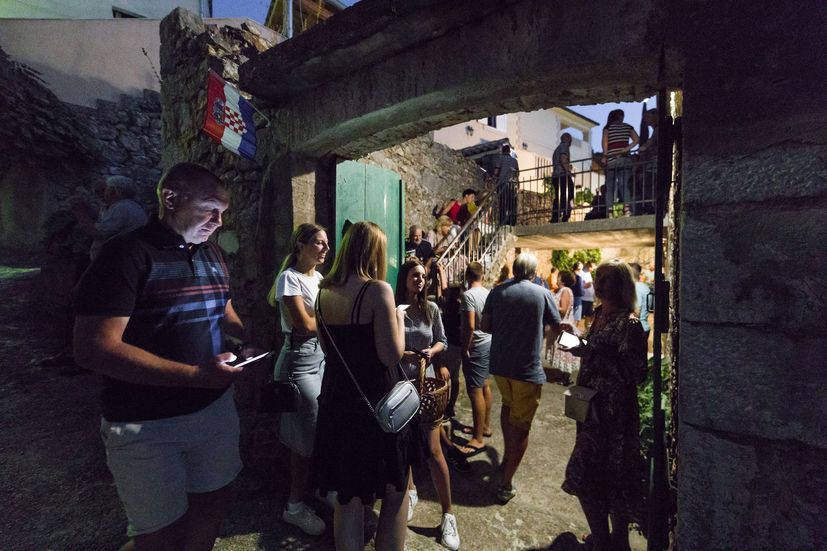 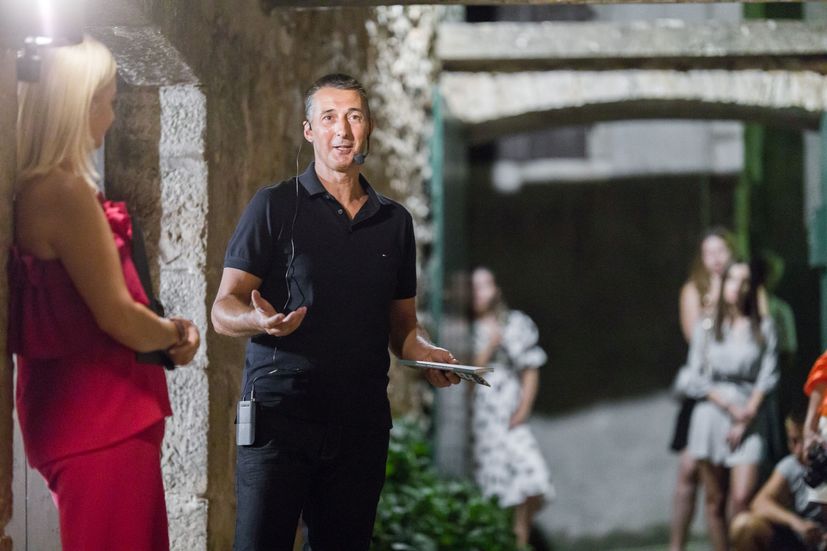 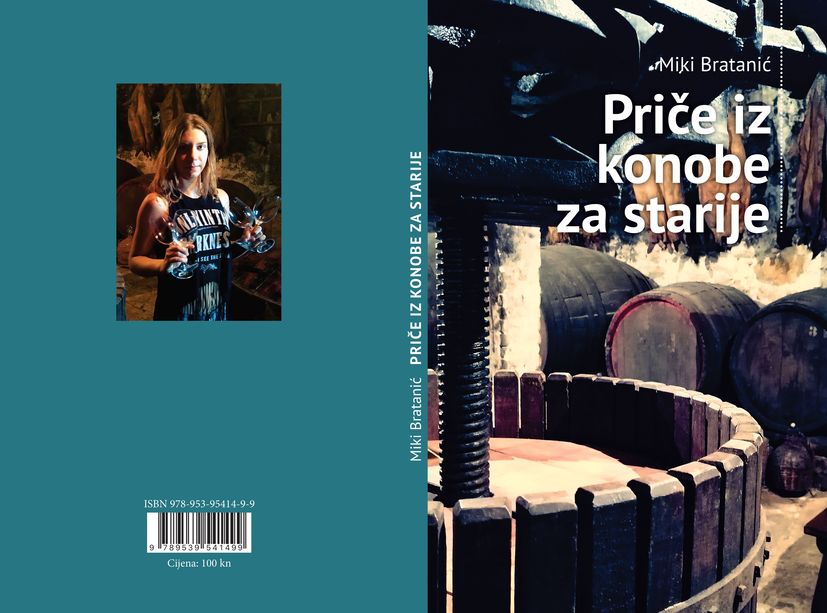 The story of the konoba, in the literary sense, began in 2010 with the book KONOBA. It was the first book dedicated to the konoba, “the cradle of Dalmatia”, as the author himself likes to call it. It describes the life of farmers and winegrowers, as well as the life of vines and wine. The book is illustrated with very rare and beautiful black and white photographs from the holdings of the Ethnographic Museum in Split, which follow the cultivation of the land, planting vines, maintaining vines, grape harvesting, and processing, but also the sale of wine. It is a kind of encyclopedia about the konoba, with a small dictionary of those lesser-known words used in the konoba.

The introduction to the book in the form of a preface was written by the late Ljubo Stipišić Delmata, who described the konoba as a place where grains of wisdom were sorted from grains of madness.

The book also includes a review of the kobona of Jakša Fiamengo, who wrote the following about it:

“Among the most important places of the Mediterranean world, along the waterfront, squares, bell towers, olives, boats, laundry picturesquely spread over the forts on tiramoles, a flash of the setting sun in the windows and more in the salt galaxy the wisest and wisest sea in the world, one of the main places by which Dalmatia and our entire coast with islands are recognisable, they are konobas, the centres of a whole microcosm.”

And Joško Bozanić says at the end of the book about the tavern:

“Dalmatian traditional farmhouse is inconceivable without a konoba. The konoba is its base, the base by which it is tied to the bowels of the earth, for the underground forces that the house must acquire for its basic purpose – survival. The konoba concentrates the forces of the underworld, the magnetism of the depths the womb of the earth: for there shall the fruits of man’s labor boil and ripen: wine and oil; and the two blessed liquids without which there was no survival: wine, that Dionysian potion belonging to the sphere of spiritual, spiritual existence and an oil that ennobles all other kinds of human food, that golden thick the liquid in which fire and light are embodied is eternal, the liquid to which Christians attach the power of purification from the earthly and corporeal at the transition from transient, earthly to transcendent, eternal existence.”

It is interesting that in the book KONOBA the author’s song “In my grandfather’s konoba” was published, which was set to music by Ljubo Stipišić Delmata, and it was in his original musical manuscript that song was found among the covers of this ode to the konoba. 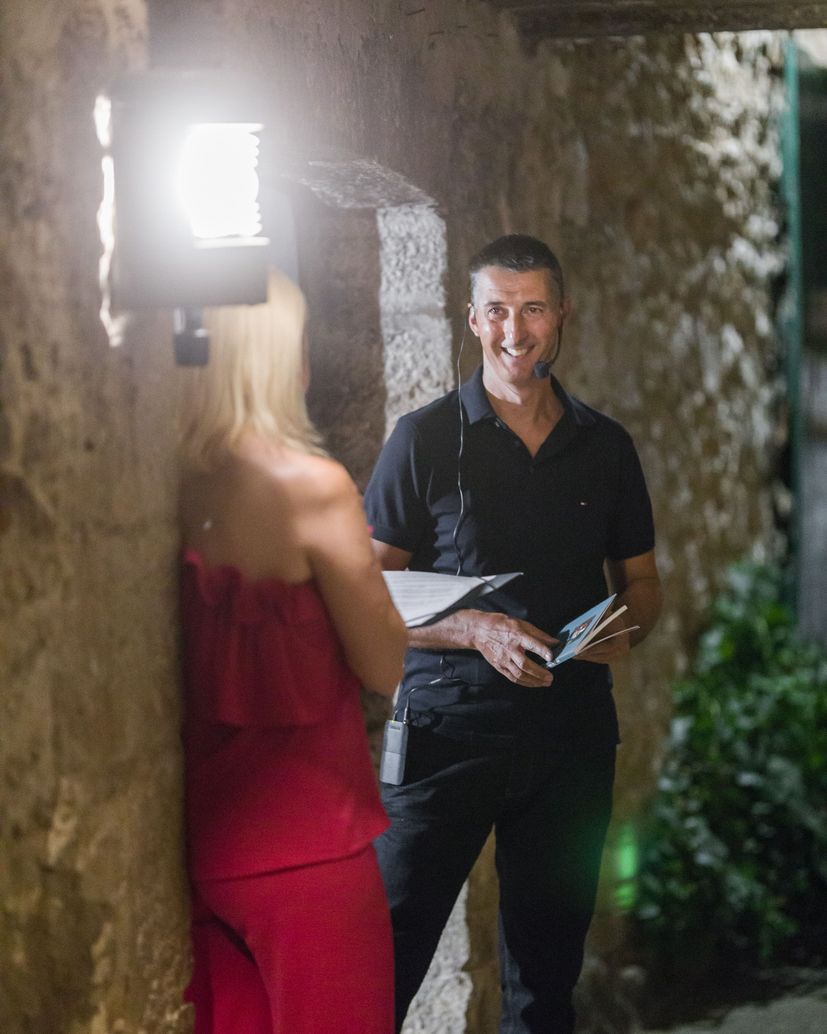 The book KONOBA has been translated and published in two additional editions; English and Italian.

Many distinguished people from various professional profiles gave their positive reviews and reviews to the book KONOBA, but also to the author’s overall effort to preserve our heritage as part of our identity and to valorise and use it in a decent way.

Academician Raukar wrote, among other things:

“There is a certain, not particularly extensive, literature in Croatian journalism and historiography on viticulture, farmers and heaviness, and wine production, but we have not yet had books like this one by Miki Bratanić, under the simple but deeply layered title Konoba. This book is a deep, spiritualiSed experience of painstaking hard work, equipped with valuable pictorial contributions. It is a sign of respect for the Dalmatian farmer and his centuries-old efforts on these shores, expertly written, so the author deserves all the praise for this exceptional, unusual book. “

From all these reviews, Bratanić selected the most interesting thoughts and published them among his texts in his second book dedicated to the tavern “The Story of the Konoba”, a very interesting presentation of the tavern through various aspects such as; historical, ethnographic, ethnomusicological, sociological, gastronomic, architectural and philosophical. 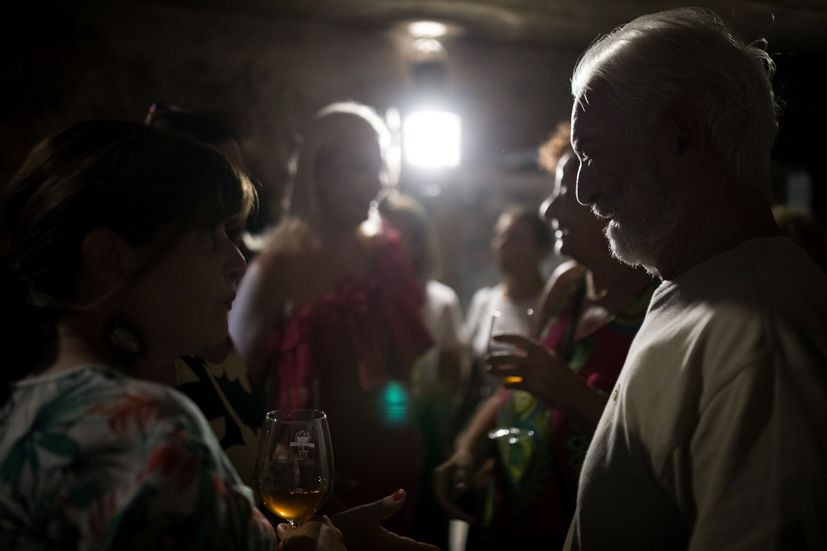 Unlike the book KONOBA, which contained old black-and-white photographs, this book published colourful new photographs of today’s people who still live and work on the foundations of the lives of their ancestors and their konobas.

The book has been translated into English and promoted in many of our places, but also in New York, Boston and San Francisco, as part of Bratanić’s project “Tale of the Konoba” in which he presents Croatian heritage and tradition through the prism of the konoba.

Bratanić also directed his story towards children, in an educational sense, so he published the book “Stories from the konoba for children” a kind of dialogue between grandparents and grandchildren in which the meaning of the konoba is brought to children and evokes what it meant to people then and today.

It is a collection of short stories from the lives of people who are in some way related to the motif of the tavern. In order to make the stories more interesting to read, the author opted for a kind of urban Split Chakavian language, but he presented some stories in the dialect of his native Vrbanj.

Such is the story “Uprising from the konoba”, a play that evokes the initiation of the uprising led by Matija Ivanić, which the author places in a konoba where the actors are preparing for the beginning of the uprising.

Some stories are thematically related to the author’s childhood, such as “Donja kuhinja”, some to his youth, such as “Sveti Mikula popi prošek”, and some, such as “Instructions for a feast”, are transferred from the stories of the elderly, so they are preserved from oblivion in the cover of this book for other, new generations to come.