At the start of this year the game, which combines both the sport of football and golf, was first introduced in Croatia, or in the capital Zagreb to be precise, and since has seen over 500 people play the game, a club formed and talk of a Croatian championships being held shortly.

“When we heard about this unusual sport, which sounded very interesting to us, we wanted to start it up in Croatia. A lot of people in Zagreb have given it a go, and we have a base of about 20 people who play FootGolf in a competitive sense regularly,” said founders of FootGolf Croatia Josip Gaurina (29), Petra Kolarević (27), Tomo Zgorelec (30) and Mario Marić (29), who say a national championships in Croatia will be organised.

The rules of the game are not too hard to work out. The player who plays the 9 or 18 holes with the fewest shots wins, with the only variance from golf is that a football is being kicked and not a golf ball being whacked.

The origins of FootGolf are unclear as they can be attributed to many countries at the same time. The first 9 hole FootGolf tournament on a golf course and played as the sport is know today, was organized in the Netherlands in 2009. Later Belgium and Hungary switched from playing in parks to golf courses. Argentina join the movement in 2010 and the AFGL American FootGolf League introduced the sport in the United States in 2011. The game was internationally publicized. and countries worldwide started collaborating on the development of the game. In 2009 the International FootGolf Association(IFGA) was established by the founders of the NFGB. In June 2012, the Federation for International FootGolf (FIFG) was created. 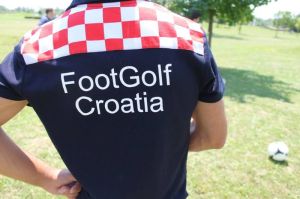