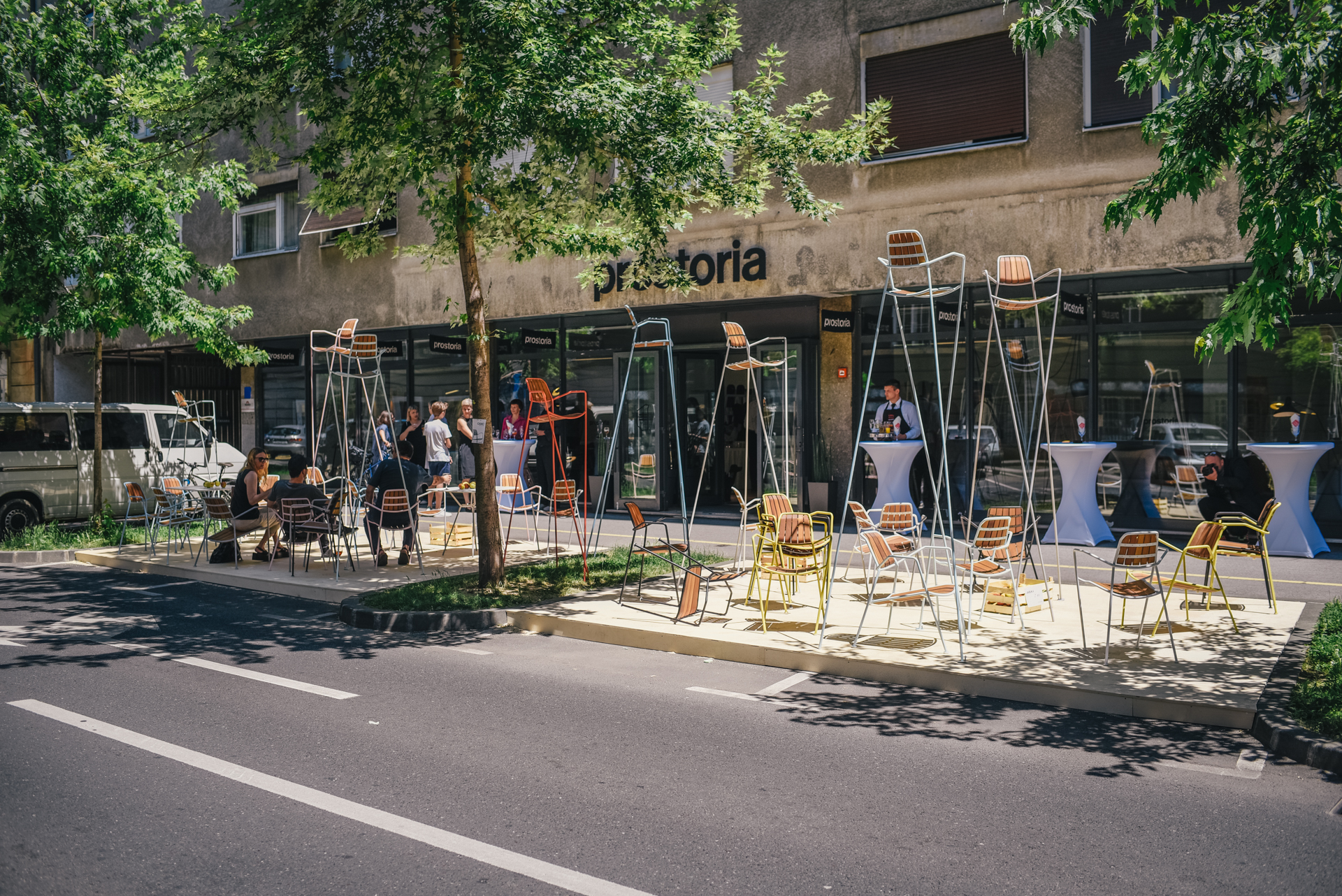 22 June, 2016, Zagreb – Thanks to the Festival Design District Zagreb which transformed the area around Martićeva Street into the epicenter of creativity in Zagreb from June 16 to 19, we witnessed a successful event that equally amazed domestic and foreign visitors, as well as residents of the neighbourhood. In just four days, tens of thousands of visitors enjoyed the Festival, showing that the true development of the city is in the hands of its citizens – their creativity, good ideas and collaboration.

About 200 associates prepared around a hundred projects exhibited in abandoned courtyards, street windows, rooftops and parks, while the favourite transformation was that of the Ratkaj Passage, which turned into a temporary public living room for the inhabitants of the neighbourhood and visitors to enjoy – closed off for traffic and filled with greenery. The minimal urban furniture made up islands for relaxation, designed by the Zagreb design studio Grupa, called “Lay-by”, installed in a couple of other spots in Martićeva Street as well. The designers from Grupa also created gastro-stands called “Stand-by”, especially for the needs of Design District Zagreb, which demonstrated how necessary festival equipment can be well thought through and perfectly fit into urban context. In these four days, many walked through the designer neighbourhood of Zagreb more than once, where design was not presented as an unattainable luxury, but a method and manner of thinking with which neglected urban potentials can be transformed by listening to the needs of citizens. The diverse programme was attended by people of all ages, while most children spent their time in the spatial installation Net, designed by collective Numen / For Use, set among the trees in the Park of the 100th Brigade of the Croatian army. The Net installation was well accepted by parents, who recognised it as a desirable alternative to a children’s park. This project is one of many that the local residents wanted to keep in their neighbourhood, which is perhaps one of the greatest expressions of the success of Design District Zagreb and the new directions for the development of the city. IKEA’s urban garden was set on the roof of Ibler’s Skyscraper, whose implementation was initiated precisely for the Festival, and which remains to its residents for permanent use after the Festival. Over 4000 interested visitors went up to see the urban garden during the four days of the Festival, admiring the new and unexpected view of Zagreb. Another contribution to the local community is undeniably the newly emerged mural on a neglected facade of the building in Vojnovićeva 19, which was painted by artist Miron Milić during the Festival, as a part of the platform Upgrade, for an intercultural community centre under the campaign “Zagreb: open city?”.

The interest in the architectural heritage of this neighbourhood exceeded expectations – visitors were asking for extra places for the architectural tours through the quarter during the Festival. Oris House of Architecture, the organiser of the guided tours, introduced about 200 people to the details of the architectural icons of the block, which is marked by some of the most significant buildings of the modernist era. An interesting mixture of educational and practical workshops, development projects, art installations, exhibitions and a lots of socialising in the streets and squares, followed by a musical programme – Design District Zagreb awakened the spirit of civic culture and connected people in the community, encouraging their own creative potential in a way that was relaxed and unobtrusive.

“I am delighted with the success of the first Festival of Design District Zagreb, which I intended as a pilot project, but – given the support – I think there is no doubt that this is only the first in a series. The Festival was participated by almost the entire local creative community, and the event was enjoyed not only by visitors, but equally by local residents. Indeed, we ensured that the event was considerate towards the residents of the neighbourhood and that they could enjoy it equally as the tourists, which there were many during these four days.

Foreign tourists were happy to see a creative, but credible and authentic image of Zagreb, and in the neighbourhood, residents were happy because the Festival ‘fixed up’ some neglected or abandoned areas. I find it a great success that we were able to, thanks to numerous partners and sponsors, as well as the support of the City of Zagreb and the Zagreb Tourist Board, achieve that all of the workshops, exhibitions and concerts were completely free, and I hope it will stay so in the future.” said Ira payer, creative director of Design District Zagreb.
Design District Zagreb was organised by the Croatian Design Superstore, Design Center Zagreb and Svibanjprojekt, in active cooperation with the Zagreb Tourist Board and the City of Zagreb, i.e. its City Office for Strategic Planning and Development of the City and the City Office for Culture, Education and Sports.
The realisation of Design District Zagreb was largely recognised by domestic and foreign brands: Franck, HEP, Croatia Osiguranje, Iskon & bonbon and Strongbow as the main partners of the Festival and numerous other sponsors. As one of the programme partners, the Festival has partnered with IKEA Croatia, with whose help it realised the project of a garden on the roof of the Wooden Skyscraper.