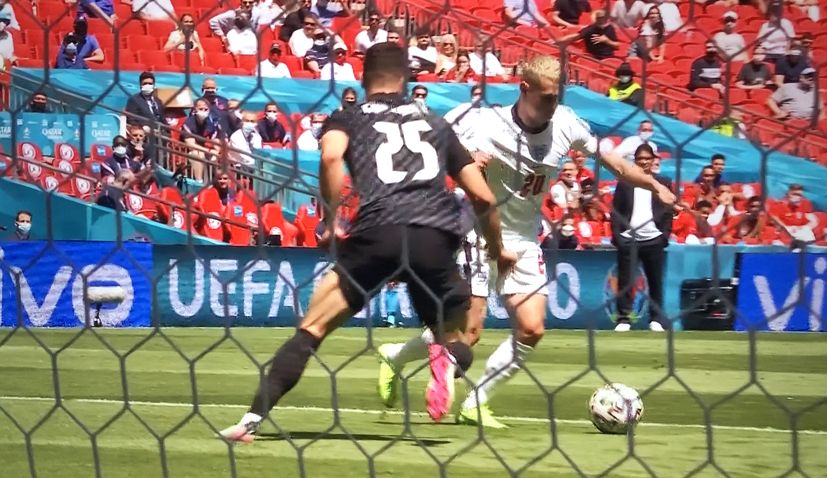 England got the better of Croatia on Sunday

England, who have lost just one of their last five matches against the Vatreni, claimed all three points thanks to a 57th minute strike from Manchester City winger Raheem Sterling.

England made a hectic start, playing at pace and putting all sorts of pressure on Croatia, who did not see the ball in the opening stages.

Phil Foden was the first to come close, hitting the post with a left-foot curling shot. Dominik Livaković would save next from Kalvin Phillips.

Croatia managed to absorb the early pressure and towards the end of the first half they began to create some half chances themselves, notably Ivan Perišić who could only steer a free shot from inside the box over the bar.

Croatia started the second half well, controlling possession and building from the back, but in the 57th minute England would get the the breakthrough.

Phillips split Croatia’s defence with a through ball to Sterling who squeezed the ball home past the advancing Livaković.

Dalić sent on Josip Brekalo and Nikola Vlašić for Marcelo Brozović and Kramarić in the as he looked to insert some fresh legs and shortly after a chance would fall to Rebić inside the box but he would shoot well wide. Croatia tired to find an equaliser but lacked creativity in the final third and could not threaten Pickford in the England goal.

Substitute Mario Pašalić had a shot with the final kick of the game from 8 yards out which would fly over the bar and Croatia would leave pointless from their opening match of the tournament.

Croatia will now head back to Rovinj where they will prepare for their next match against the Czech Republic on Friday, 18 June.