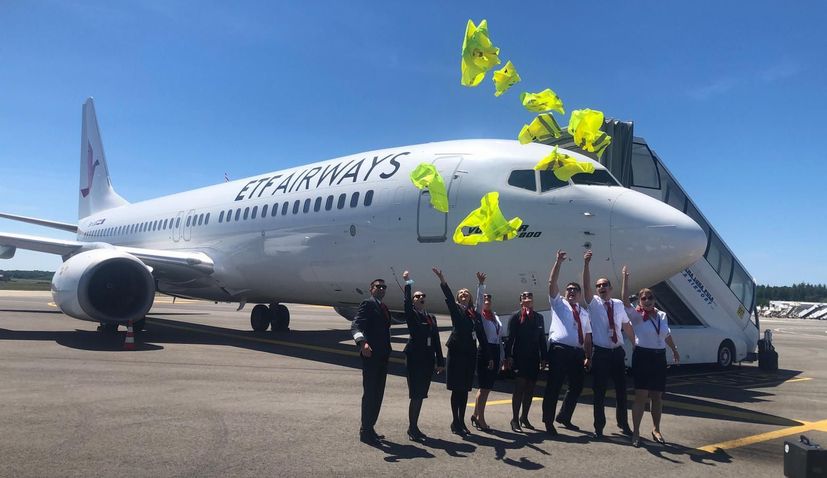 PULA, 29 May 2021 – The first airliner of Croatia’s new air carrier ETF Airways, the 189-seater Boeing 737-800, was introduced to the public at Pula Airport on Saturday, 29 May. The second aircraft of the same configuration is expected to arrive in early June, the airline said.

ETF Airways will be operating two aircraft this season, but there are ongoing negotiations about acquiring a third one in 2022. The airline envisages to expand its fleet to seven aircraft by 2025.

“The market has undergone a speedy recovery after the pandemic subsided in the spring,” said ETF Airways CEO Stjepan Bedić. “The demand for our services outside Croatia has been growing beyond expectations. We were even surprised a bit, but we have a great team that rose to the challenge and prepared the company for its first operating season with two Boeing airliners. This is the first time in the past three decades that a Boeing aircraft entered the regional market,” points out Bedić.

ETF Airways is run by three experienced experts who are also members of its board of directors: Stjepan Bedić, Marko Banković and Dragan Stefanovski. The company’s major investors and members of its supervisory board are the acclaimed longtime financial experts Ratko Bajakić and Zdenko Adrović. Velimir Šonje, an acclaimed economist, is the supervisory board’s deputy chairman and also an investor.

Ratko Bajakić, chairman of the supervisory board, said that the last year’s disturbance in the airline market had created some new opportunities, which made him support ETF Airways with capital of his ICF: “Civil aviation is a very demanding business in terms of capital and, in normal times, entering such a competitive market is not easy. However, the conditions for leasing large airliners suddenly relaxed after most of the global fleet had been grounded. We managed to negotiate very good leasing conditions, which is a stepping stone for further business expansion. We believe we have the best management and dedicated and motivated employees who, supported by the investors, will accomplish the company’s ambitious business plan.”

ETF Airways will not be a scheduled carrier. Its business is oriented to charter flights and wet-lease agreements (providing flights for other companies): “Smaller companies find it almost impossible to compete with the giants like Ryanair or Lufthansa,” said member of the board of directors Marko Banković. “But the market has many niches, some of them connected with tourism, with plenty of room for the companies like ours.”

The company has already signed its first permanent contract – connecting EU destinations with the non-EU countries of Southeastern Europe. The fact that ETF Airways started its operation outside Croatia does not mean that it will not become an important air link for Croatia.

“The world is big but we are primarily a Croatian company,” said Velimir Šonje. “Understandably, the pandemic and focus on vehicle-driving tourists have hindered investments in the development of air links with more remote tourist-generating markets such as Northern Europe, Russia or Israel. But charter planes are irreplaceable as aerial highways and we are certain that new markets and new air links for passengers with higher purchasing power will keep opening in the years to come. They can extend the tourist season and thus strengthen Croatia’s tourism. We are a natural partner for major tour operators, hotel owners and destinations with advanced tourism-development strategies. This is why I am certain that, in the following years, we’ll be opening new markets and generating new values together, thus contributing to Croatian tourism’s evolution to a tourist industry with a higher added value. We are ready,” said Šonje.