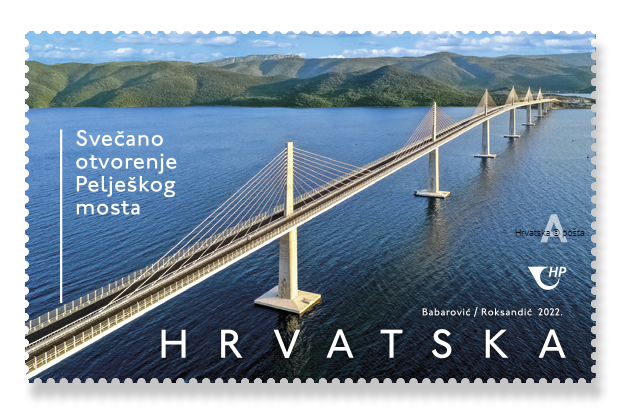 ZAGREB, July 22, 2022 – Croatian Post will put into circulation on July 26, 2022, the day of the ceremonial opening of the Pelješac Bridge, a new commemorative postage stamp with the motif of the bridge.

The author of the stamp is Dean Roksandić, a designer from Zagreb, based off a photo taken by Dubrovnik photographer Mario Babarović. The text on the occasion of the release of the new commemorative stamp was written by doc. Dr. Goran Puž, B.Sc. civil engineer and head of the Administration Office at Croatian Roads.

The Pelješac Bridge is part of the state road that goes around the Neum Corridor, that is, it is part of the Road Connection with the Southern Dalmatia project.

The project includes the construction of the bridge, access roads to the bridge and a bypass around Ston, which established a solid road connection between the separated parts of the land territory of the Republic of Croatia.

The 32.5 km long two-lane state road connects the far south and creates a key prerequisite for the development of the mainland and islands of the Dubrovnik region.

The Pelješac Bridge, 2,404 meters long, is the most demanding part of the project and crosses the sea strait – the Mali Ston Channel. 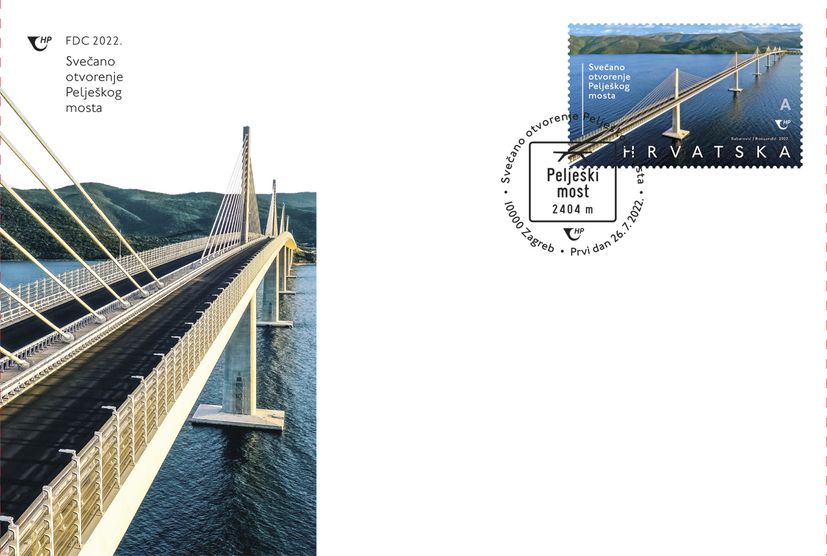 The project Road connection with southern Dalmatia realises the strategic interest of the Republic of Croatia, and at the same time it is located on one of the European transport corridors, so it is largely financed from the funds of the European Union.

The design challenge was the foundation soil, which consists of deep deposits of silt and clay above the rock, then the significant seismicity of the location, as well as the considerable probability of strong winds.

The task of bridging the sea channel in such complex circumstances was achieved with a unique construction consisting of a suspension bridge with six pylons and five main openings measuring 285 meters each on deep foundations built on driven piles.

Thus, in view, we see a total of 13 openings, with initial and final support on the abutments of the bridge, and a total of 12 intermediate supports.

A bridge concept was adopted without a prominent central span, symmetrical in appearance and without extremely high vertical pylons, with a series of the same spans over the central part of the channel and with clearly defined, repeating elements of columns, beams and diagonal braces.