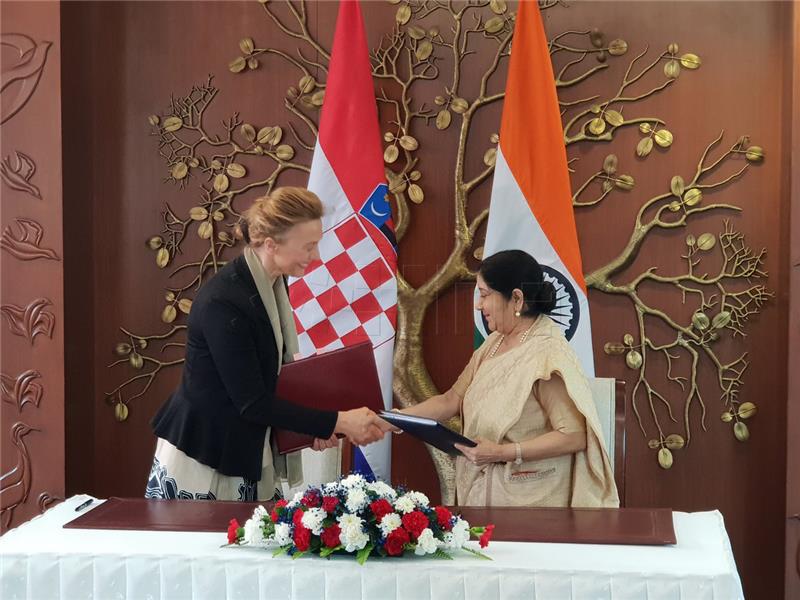 ZAGREB, (Hina) – Croatian Deputy Prime Minister and Minister of Foreign and European Affairs Marija Pejcinovic Buric was on an official visit to India on Monday, confirming good bilateral relations between the two countries and underscoring the potential for their further development, the ministry said in a press release.

The two foreign ministers underlined good bilateral relations between the two countries, in particular economic, cultural and scientific cooperation, and confirmed that there was significant potential for further development. They exchanged their thoughts on current regional, European and global issues.

The two ministers signed an agreement on the gainful occupation of family members, members of diplomatic missions or consular offices, and a new programme of cultural exchange between the ministries of culture of Croatia and India for 2019-2022.

The meeting with the parliament speaker focused on bilateral relations, economic and cultural cooperation, and strengthening parliamentary cooperation.

Pejcinovic Buric visited the New Delhi University, where she met with the Vice-Chancellor, Professor Yugesh Tyagi, and briefly addressed students at the Department of Slavonic and Finno-Ugrian Studies. The department offers courses in Slavonic languages, namely Bulgarian, Croatian, Czech, Polish, Russian and Hungarian from the Finno-Ugrian group of languages.

This year marks the twentieth anniversary of Croatian language studies at the university, the ministry said.