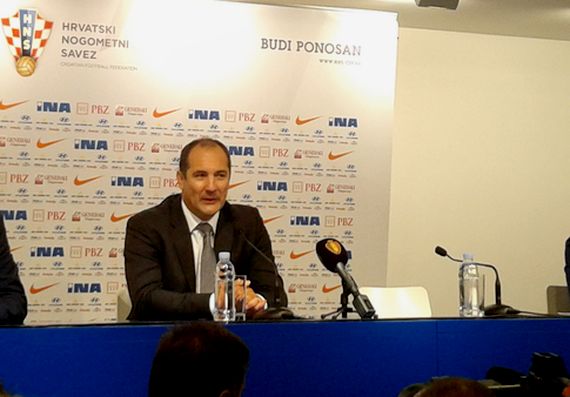 Despite losing back to back World Cup qualifiers at home, and mounting pressure from both the fans and the media, Croatian football coach Igor Stimac is safe in his job – for now.

Stimac, who was ‘satisfied’ with Croatia’s performance in their 1-2 loss to Group A winners Belgium last night in the rain at Zagreb’s Maksimir stadium, was the target of abusive chants from the smallest crowd (12,000) Croatia has played in front of for an official qualification match.

“The defeat is not a tragedy, we are sad and disappointed, but nothing is lost because we already calculated that we would be in the play-offs. There was no discussion about sacking the coach,” Croatian FA’s Damir Vrbanovic said after last night’s loss.

Legendary Croatian coach Miroslav Ciro Blazevic, who took Croatia to third place at France ’98, had some advice for Stimac.

“Igor can not pamper them now if he wants to mobilise them. He must point out their mistakes because this is not how modern football is played. We were anemic,” said Ciro.

Even some of the players agree that things are not right in the Croatian camp. “We have not been in a crisis like this for a long time,” said last night’s goal scorer Niko Kranjcar after the match. The manager seems to be the only one with different views.

“I am overall satisfied with the performance. We showed character in the second half, to come back like that after being down to individual mistakes – only brave sides can do that. Our goal is to qualify for Brazil and nothing has changed,” said Stimac. Croatia now face Scotland midweek away in their last group match before a likely play-off in November.