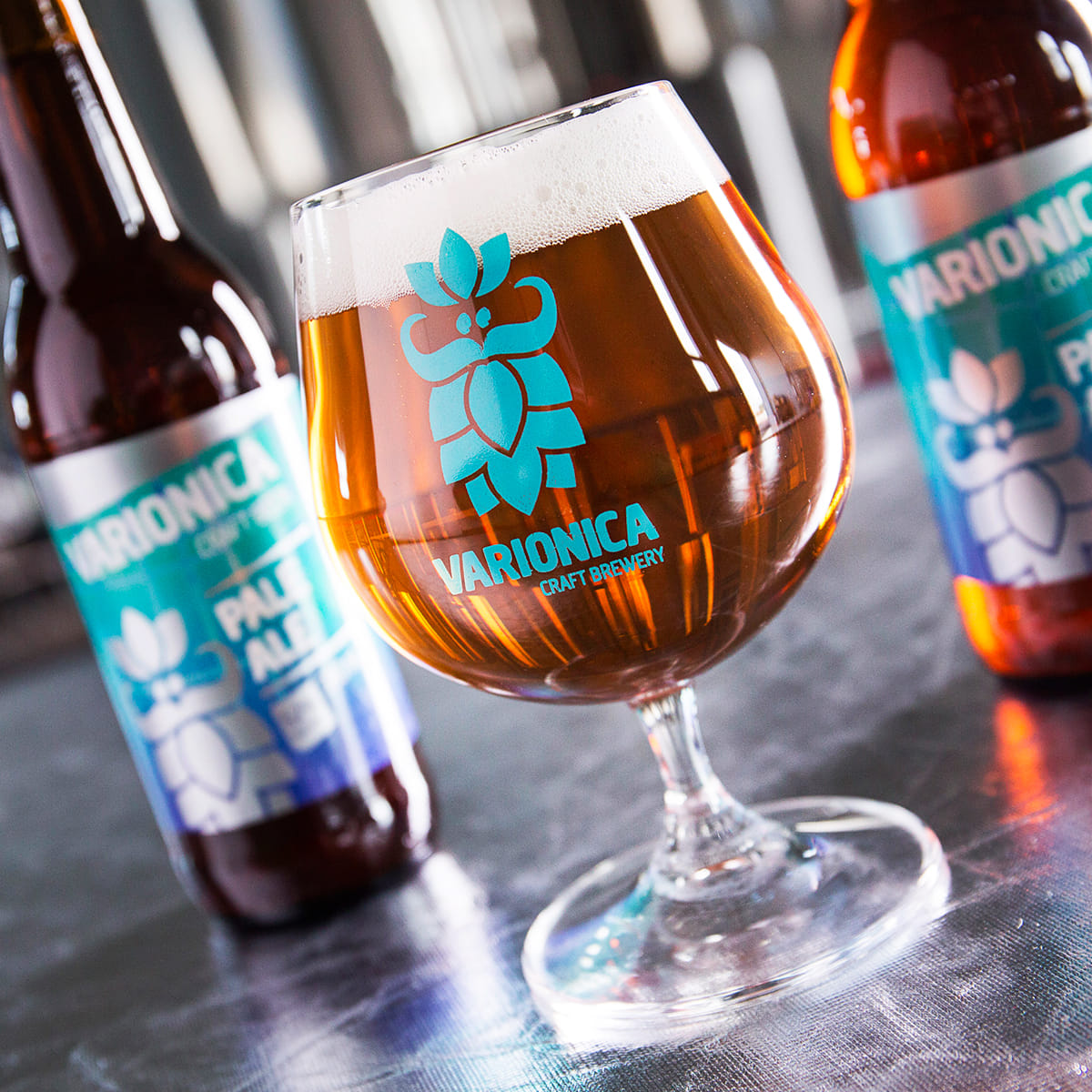 Craft brewery Varionica returns from the most prestigious beer competition with a double gold medal for their Pale Ale beer, bronze for their NOEL Passion Sour beer and gold for their collaborative Chef’s beer, which delighted the profession and ranked itself at the top of the world brewing!

After the two awards that craft brewery Varionica won in Croatia for its Pale Ale beer, international recognition has now arrived for it. It is, no less and no more than the highest recognition from the most important and most prestigious beer competition – European Beer Challenge 2020. At the competition, which took place in London, Varionica won a double gold medal, among thousands of samples from as many as 39 countries.

“Pale Ale is our trademark beer and this double gold has definitely put it on the international map of excellent beers. These medals are proof of how much love and effort we put into every detail during the production of beer,” said Davor Simičić, CEO of Varionica brewery. 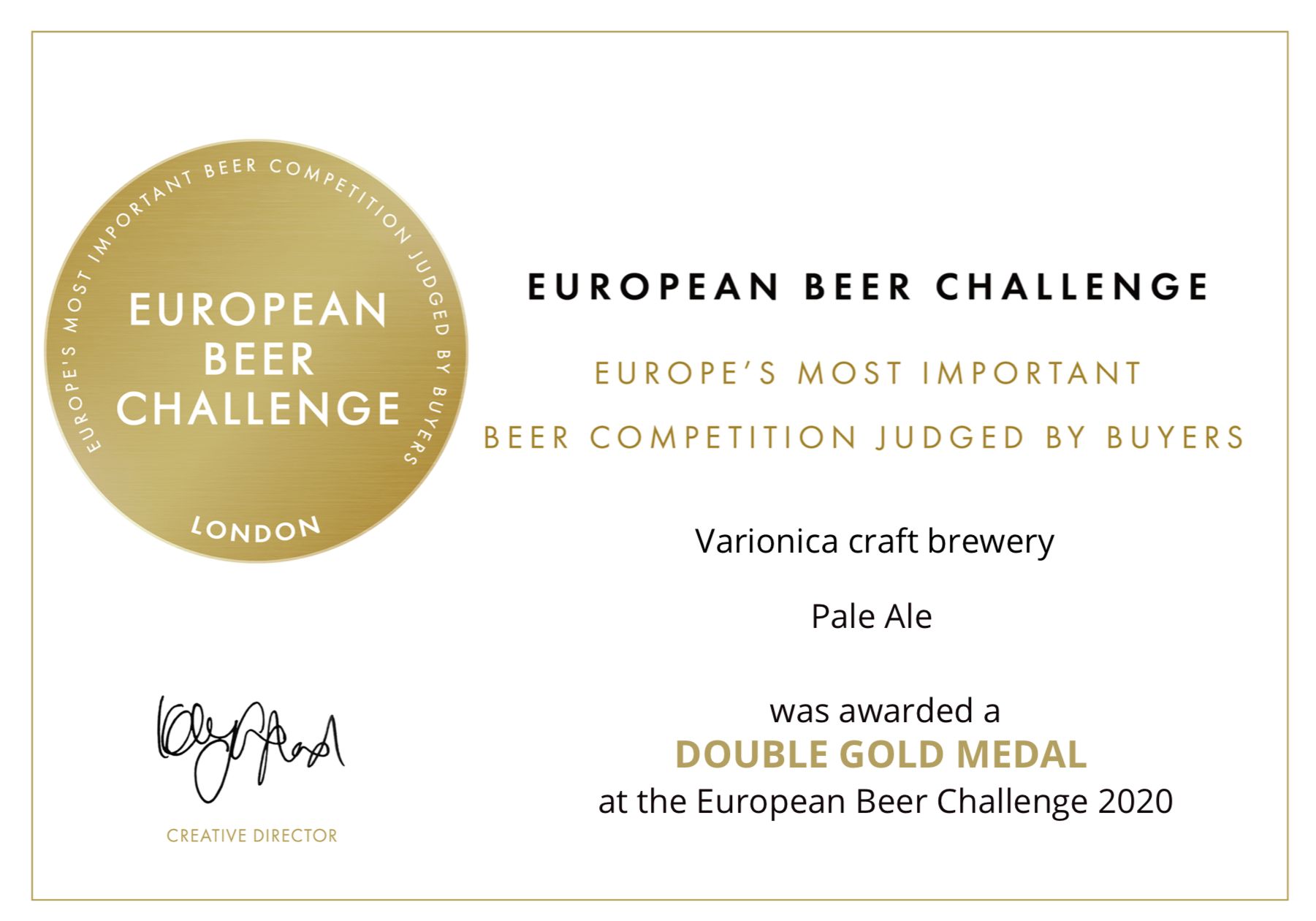 Pale Ale is a beer with a rich taste, fruity aroma and amber colour made with a selected combination of malts and American hop varieties. Additional dry hops emphasise the freshness of hops and the aroma of citrus and pine. This is the first beer they “brewed” in their brewery in 2014.

What makes the London Beer Competition prestigious, and winning exceptional honour, is the jury’s special method of tasting. The beer is tasted blindly, which means that the judges do not see the bottle, do not know where the beer comes from, what its price is, therefore, they do not have any information about the sample, and they are not allowed to exchange impressions with other judges.

But that’s not all from the European Beer Challenge awards for Varionica who are based in Pisarovina. Their NOEL Passion Sour beer, made to order for the Michelin-starred restaurant of the same name in Zagreb, won bronze. 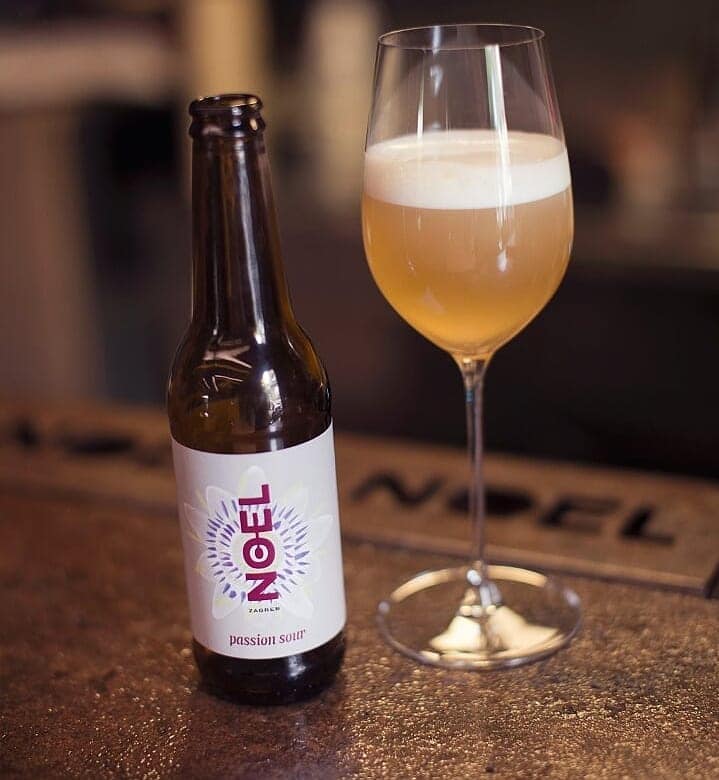 NOEL Passion Sour beer is a German traditional Gose style beer that almost disappeared until craft breweries revived it. NOEL Passion Sour is a refreshing beer enriched with passion fruit puree, which makes up 10% of the total amount of beer (200kg !!). Thanks to that, it also attracts those who are less prone to different flavours in beer. 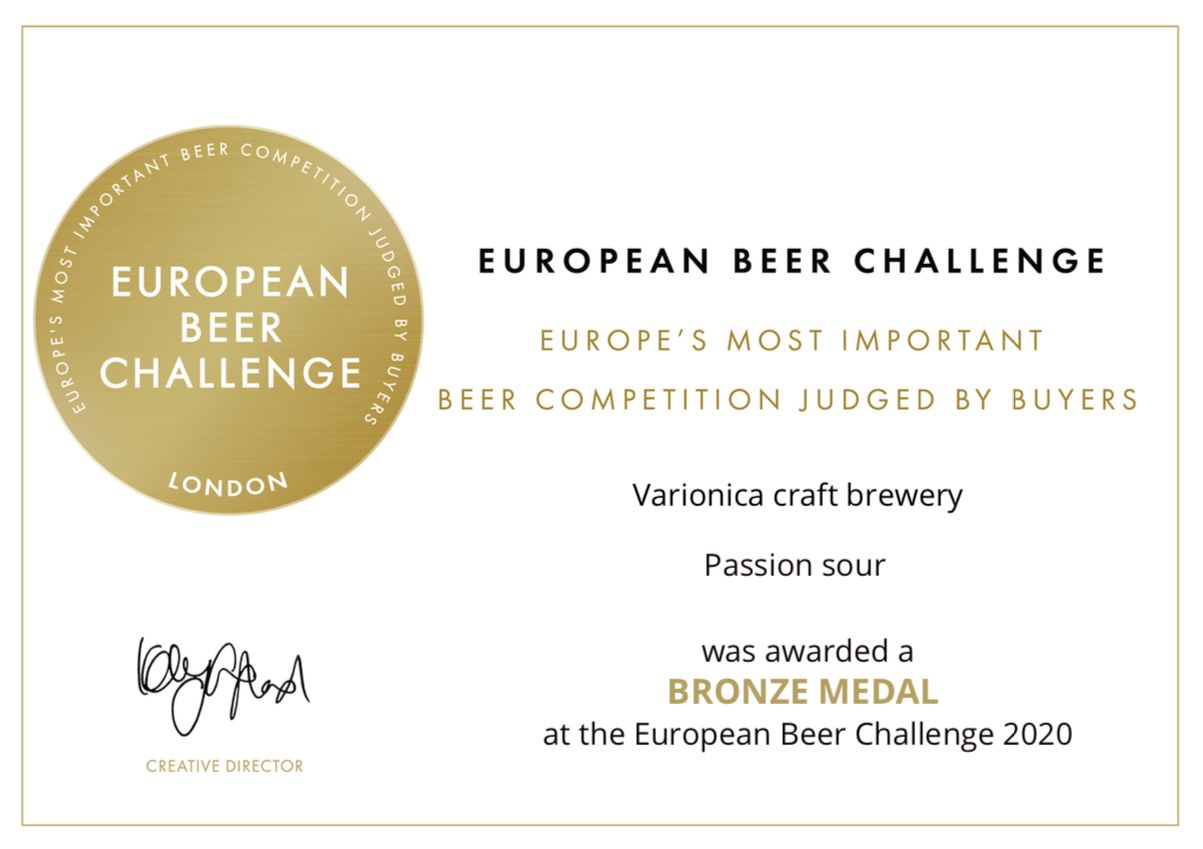 The gold medal Chef’s beer is a beer made in collaboration with Zmajska brewery, Barut brewing and blending from Slovenia, Chef Mato Janković and winemaker Alen Bibić. The unique beer is the result of an unusual collaboration between brewers, winemakers and top chefs, created by combining the finest ingredients, craftsmanship and centuries-old tradition with a modern twist. A complex beer, full of malty body, relatively high alcohol content, with perfectly balanced fruity, sweet and woody aromas. 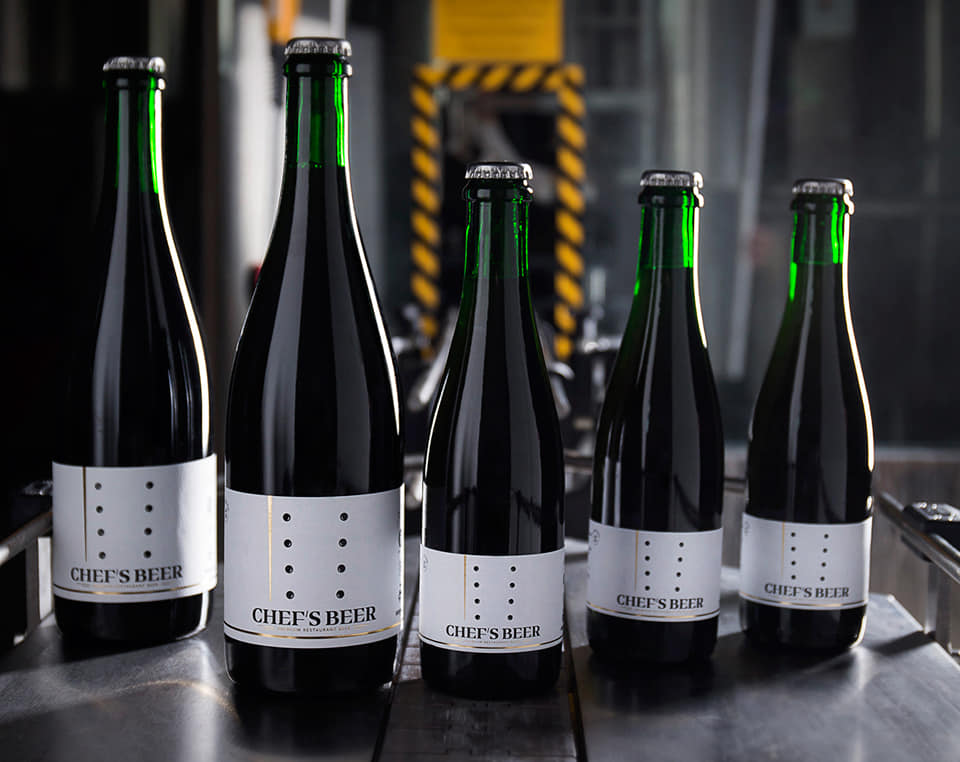 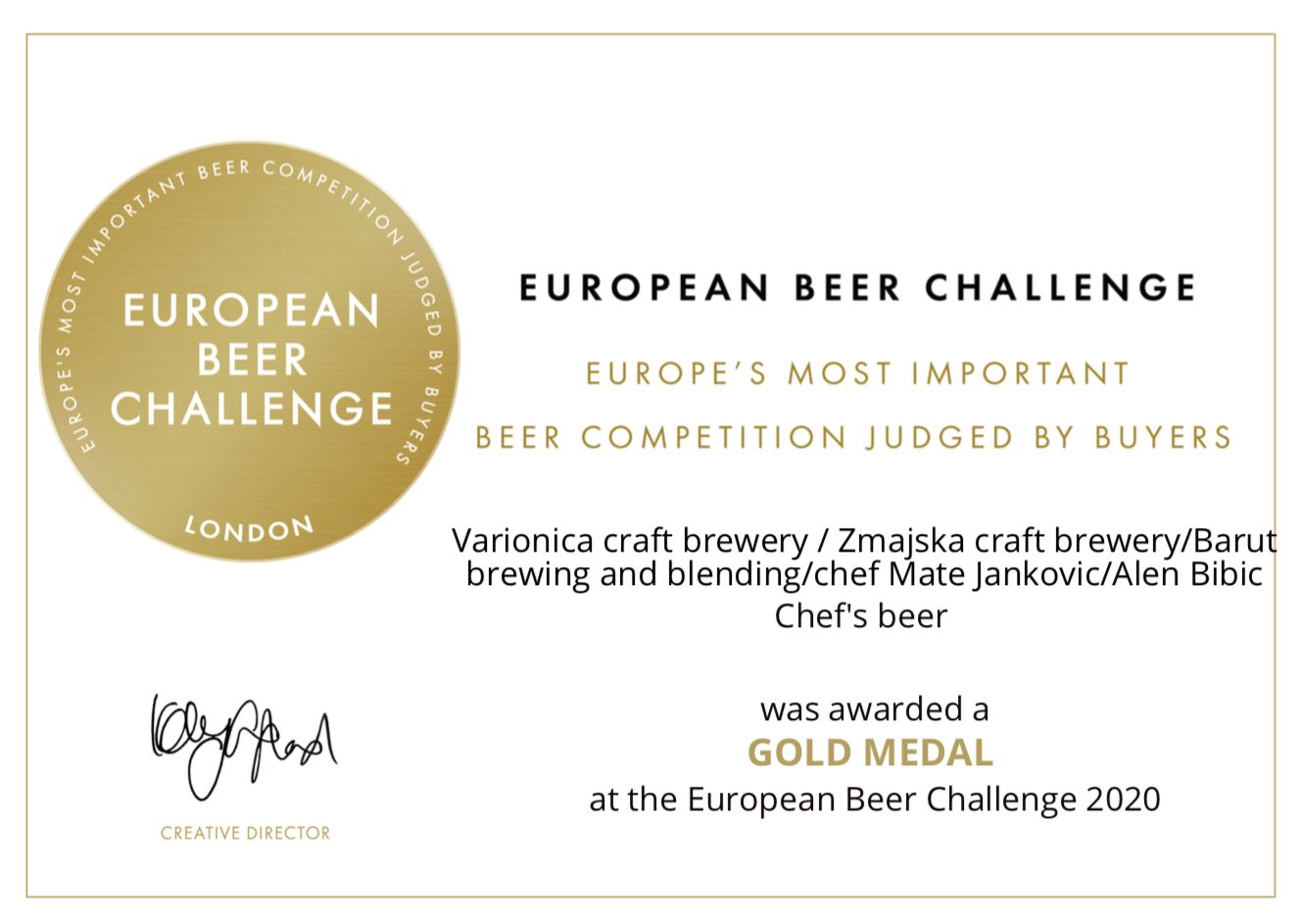 Chef’s beer and NOEL Passion Sour can be tasted exclusively in restaurants and other best hedonistic destinations, while the Pale ale is widely available in restaurants, the best cafes and on the shelves of over 240 branches of retail chains Spar, Vrutak, Kaufland, Konzum, Plodine, Food, Roto and Lonia. All beers are also available at the Varionica webshop.

You can see all the winners from the European Beer Challenge 2020 here.